Tomatoes of 2015: Types, Tastes, and Pictures 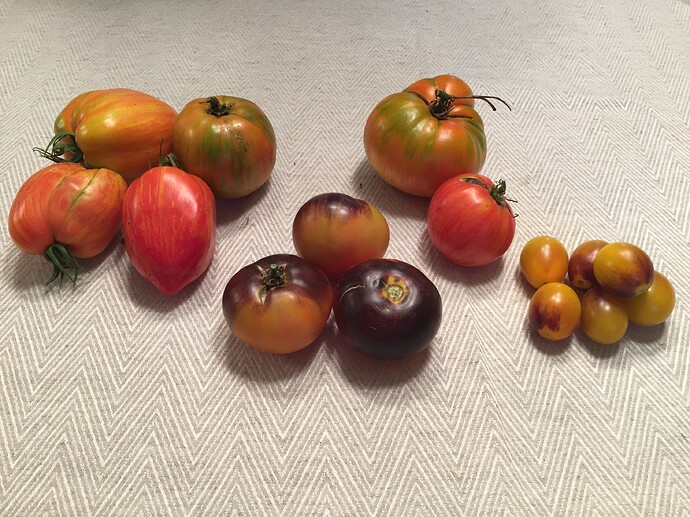 From left to right: Speckled Roman, Indigo Apple, Solar Flare, Indigo Kumquat. The Speckled Roman was great and had good taste and texture for fresh eating, but not so great that I’d grow it again next year. The Indigo Apple looks nice but has a mealy consistency. I’ll probably use the rest for sauce. Solar Flare is the decided winner of these four — I have a few other varieties that aren’t quite ripe yet — it has great tomato taste, good size, good texture, and the plant is highly productive. Good balance of acidity and sweetness. Perfect for tomato, basil, mozzarella. Indigo Kumquat is okay for eating while I’m walking around the garden, but it’s sort of bland.

I’ve trialed F1 and Heirloom tomatoes over the course of years now and believe it or not, and surprisingly enough to even myself, I almost exclusively grow ‘Early Girl’ tomatoes now. They perform extremely well here, I’ve taken them to a tomato mania taste event and heard people rave. They give me excellent crops through thick and thin. Lately getting a crop in due to spidermites is no trivial matter. I grow tomatoes year found in EarthBoxes, and fresh tomatoes are a staple in my house, so EG wins the prize.

Brandy boys are the winner here, huge deep pink and really productive and delicious according to everyone. I hate tomatoes but love growing them.

I have Indigo Rose growing. I think that any mater with Indigo in the name is likely to be lackluster in taste and texture. They may be touted for possible health benefits from the deep purple pigmentation, but I’ve never heard anyone extoll their pleasures from eating them out of hand.

The only tomato ripe yet are Indigo Rose. Also an appt. with Mr. Rototiller.

I have tried several tomatoes before, I stick with Sungold/Sunsugar, Super sweet 100, and Kellogg. other fancy varieties, such as green, purple and whatever in between are only skin deep

I like trying different types too. This year I’m growing japanese black trifele. 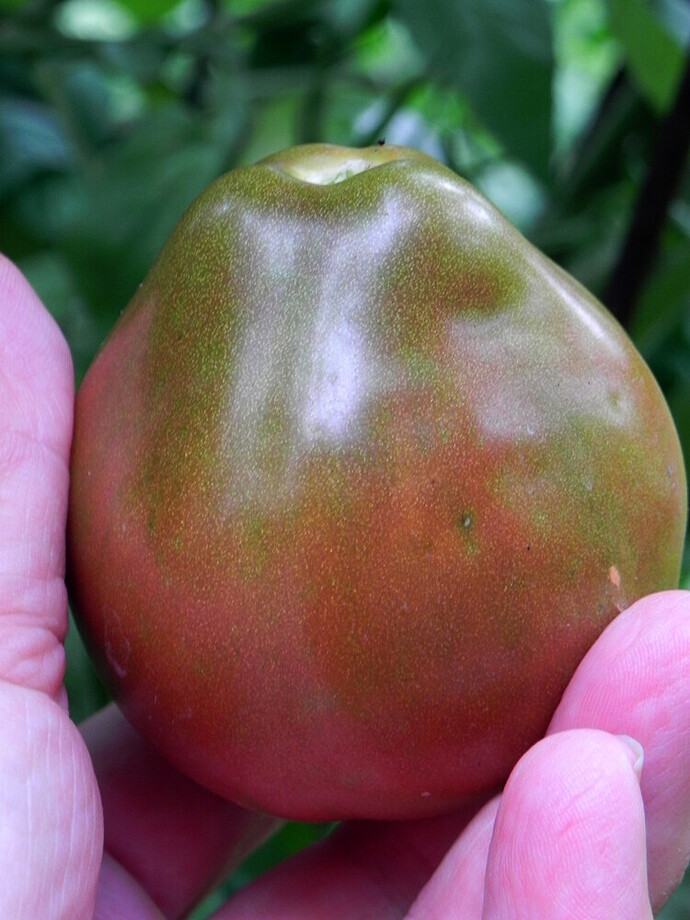 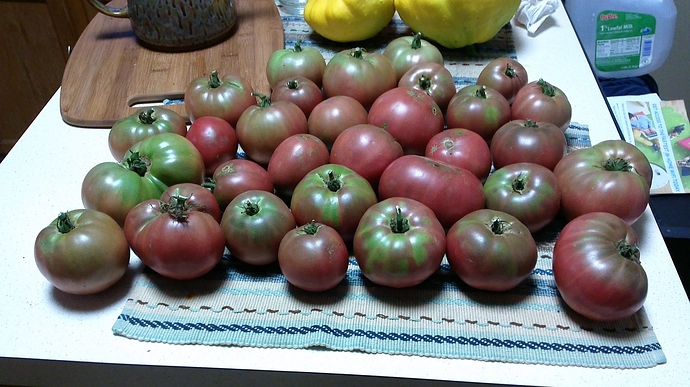 This is my best tomato this year, Black from Tula, very productive, disease resistant, do not crack, good taste 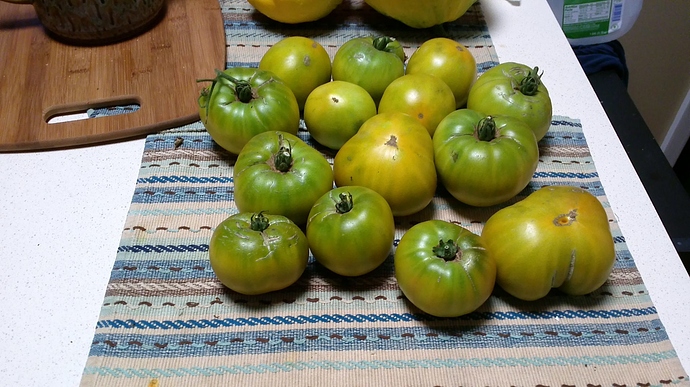 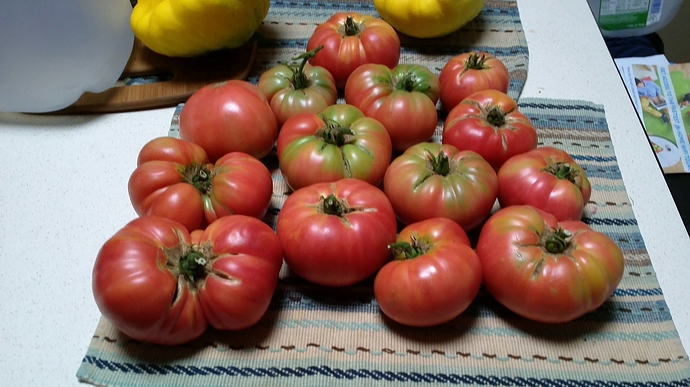 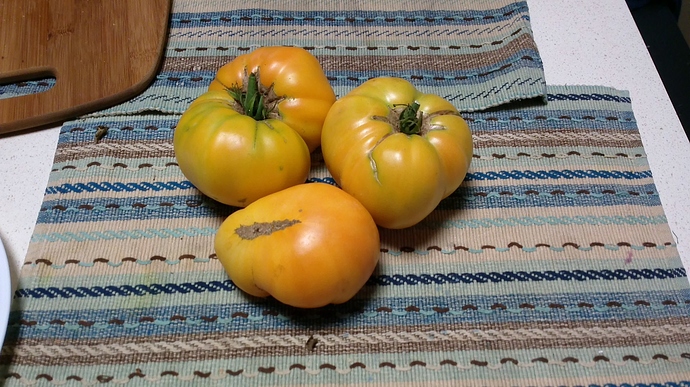 Persimmons, not so productive, but very, very tasty. 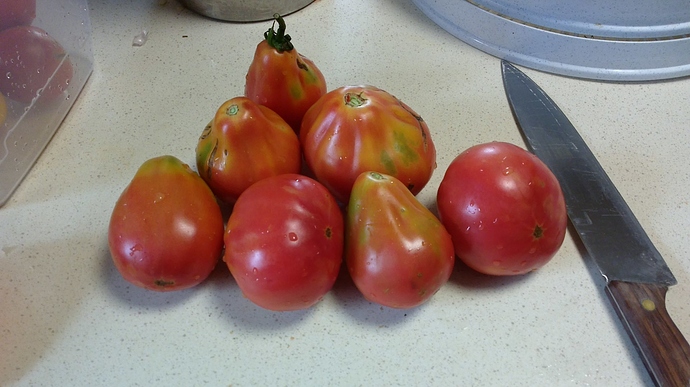 I have several more varieties, but those above are my favorite.

Just starting to get tomatoes from the new plants this year. Brandy Boy has good taste and seems productive. Still waiting on Jersey Boy and Goldie to ripen. Hands down winner for taste and productivity is SunGold (and its clones). I have one in the GH still overproducing which was planted last year. Great taste, fairly disease resistant. Only problem is you can’t use a cherry tomato for some things.

How would I go about preserving a tomato cultivar for the future? I have a 3-4th generation volunteer in my yard which is intriguing me. The plant itself is huge, while the tomatoes are almost pea-size, but plentiful.

Just squeeze a few toms into a bowl, let sit for 4-5 days to ferment to clean them off and put on paper towel to dry.

I used to grow many tomatoes, now I just grow one. Its an unknown Brandywine type, very reliable for me. About every five years I need to save more seeds as they don’t last forever.

@Antmary, those lovely black tomatoes remind me of how much I love blacks, I should do a black next year. I have grown many of them: Paul Robeson, Carbon, and JDs C-Tex were some of my favorites.

How reliable are tomato seeds in terms of imitating their parents? I have no idea what the parentage of this plant is, but I assumed it was a hybrid of a hybrid of some hybrids.

I’ve tried a bunch of different gimmick tomatoes over the years and in the end I’ve come back to early girl and beefmaster. I decided taste and texture is more important than looks. Besides, most of my tomatoes are sliced for BLT’S and other sandwiches or chopped up and put in salads or cottage cheese. I don’t preserve or can anything.

Tomatoes cross with themselves 90+% of the time if left alone, so its probably a self-cross of a seed of the hybrid. It takes 4-5 generations to stabilize so the seeds should be fairly similar to the tomatoes this year assuming it is indeed 3-4 generations old already. When I grow out early crosses I put 3-4 seedlings together to grow a bush, and I select the best one to stay alive once they have started fruiting. You may want to grow out a couple since it may not be fully stable yet.

@speedster1, I also don’t care about looks but the taste of some of these old tomatoes is superior to Early Girl etc based on my experience. A good black has a “smokey” flavor that is really something special. The downside is disease resistance and productivity can be worse.

@speedster1, I also don’t care about looks but the taste of some of these old tomatoes is superior to Early Girl etc based on my experience. A good black has a “smokey” flavor that is really something special. The downside is disease resistance and productivity can be worse.

I guess I haven’t been lucky enough to get ahold of those great heirlooms. Most of the non-typical varieties I’ve tried either had leathery skin, overly soft texture, and in one particular yellow variety I grew tasted like battery acid. I always thought yellows were supposed to be lower in acid but this particular variety was brutally acid with no endearing qualities. I need to start seed saving.

Those tomatoes on the pictures all taste great. Well, maybe BrandyBoys F1 are the least of my favorites, they are tangy, but some people do like that. I am still in search of the good red tomato. I always have couple of reds, but they do not taste as good as the colored ones, even my husband agreed with it.

I have also found many with leathery skin and too soft. Sometimes I put up with that for the flavor.

@Antmary, my favorite red is Stump of the World. It is on the soft side and is very oddly shaped, but the taste makes it all worthwhile. When we were picking our Brandywines this year my daughter asked about “those odd shaped” tomatoes that we used to grow that tasted like heaven - she still remembers them even though the last time I grew them was quite a few years ago. I tried to grow it this year but my seeds were too old, none sprouted.

Thanks Scott, I’ll look for the Stump of the World.

I prefer the classic beefsteak type of tomatoes… ive tried many of the oddballs and keep coming back to the big slicers…i’ve also tried to limit my planting… still a lot of green tomatoes here. These chill nights aren’t helping (mid 50Fs).

When God gives you too many green tomatoes fry them and make FGBLT sandwiches. They are the greatest thing you will ever eat.