Too little chill hours in California

While my area has the coldest January measured since the 40s California seems to have the opposite problem. Interesting read, at least for me 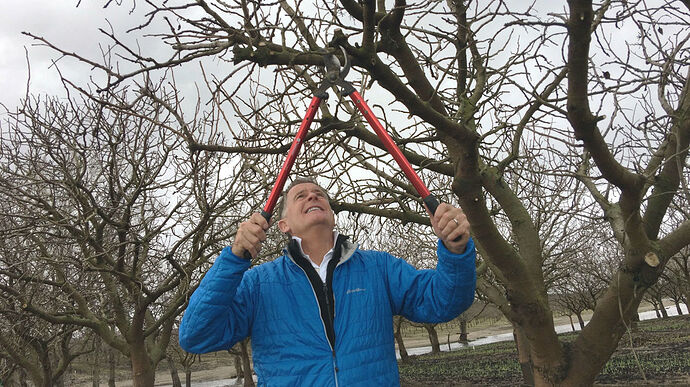 If These Trees Don't Get Time To Chill, Farmers Will Be Out On A Limb

Tree crops like pistachios, peaches and almonds need a certain amount of cold weather every year. But scientists say that California's climate may become too warm for them to grow there.

The article is correct concerning existing cultivars in the ground. The economic problem for the Prunus farmers is whether they can afford to replace their trees with lower chill cultivars. The Pistachio farmers in already borderline places are flat out of luck – they’ll need to change crops altogether or retire.

Move the crops north. Wisconsin will be the new peach belt

Chill hours are a big problem here. I’ve been looking at the UC Davis CH calculators and the station nearest to me used to record 1000+ CH till 2013. Since then, its been 800 or less. I get fewer CH than that station so I’m looking at no fruit with my high chill trees. This year looks just as problematic as the last two.

We are having the exact same problem down here in the SE USA. I’ve only gotten 440 chilling hours so far this year. It should be in the six or seven hundred range by now.

We have plenty of chill hours here in Virginia, but my fear is a combination of late spring frosts and everything coming out of dormancy a month too early due to the warm weather we keep having in January and February. It seems like this will be three years running of strange winter weather.

My plums are already blooming because of the warm weather and my apples are budding out. So far the rest of my trees are still dormant though

I look at the historic chill hours data for my area (Tracy, CA) and I do not see any statistically significant decreasing trend. Since 2002 (that’s how much back the UC Davis data go), we are pretty much in the range of 800-900 c.h. for most years, with some minor fluctuations in both directions. The winter of 2014/15 is the only significant outlier at 604 c.h., but in 2015/16 we have been back in the normal range at 797 c.h., and this winter we are well on track to get above 800 c.h. by the end of February (we already have 631 c.h. with a full month to go). Two years ago all the climate scientists were talking about many years of drought awaiting us in California, and this year it’s flooding all around, at least in the northern part of the state.

BTW, there were no commercial cherry orchards in Kern County (at least not on a large scale) until about 25 years ago, until new (by then) low-chill varieties such as Brooks and Coral have been developed and introduced. Until that happened, main commercial cherry growing areas have been around Brentwood and Sacramento. The trend of moving large scale stone fruit production to the Fresno area and further to the south has been based on the development of cultivars that have lower chill requirements, and, as with any “stretching of the envelope”, it involved the risk of running into a warm winter or two.

Also, backyard growers, in my opinion, have absolutely no reason to be worried, since what is 50% harvest loss for a commercial grower, for me would just mean less thinning.

I’ve always had low chill hours here in the Bay Area, but this winter I have gotten more chill hours than usual. I remember back in 1990 we had week of 32 degree weather (extremely unusual) but there have been more nights in the low 40s this year than I can remember. Now, anecdotal information aside, this sort of thing makes me very uneasy. Maybe we’ll see a rise in low-chill peaches. But I feel bad for the nut farmers (sort of) since it takes about 10 years for nut trees to start producing.

But I feel bad for the nut farmers (sort of) since it takes about 10 years for nut trees to start producing.

The almond growers can just graft over their trees from rootstock up … but the affected Pistachio growers are SOL.