Should have thinned these Fuji a lot more! We start picking next Saturday. 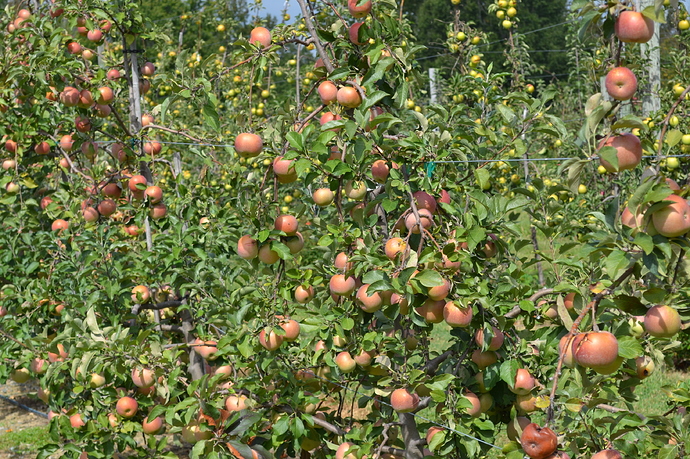 After much dithering, I watered my Fuji tree a small amount last week, because it’s been so dry with no rain in sight until harvest.

The other trees, I’ve waited until after harvesting to water, but I’m concerned about next year’s buds

I always fail to thin enough! I could have easily taken off another half. I wish I could claim I’ve learned my lesson, but I’m starting to doubt it- this isn’t the first time this has happened.

Did the cold and snow in your area affect your fruit? I guess apples can handle temps in the high 20s before they degrade in quality?

Actually I’m in 7B so my problem is too much heat during the Apple growing season. We also have a problem with an early warmup followed by multiple killing freezes which can get the peach blooms, but since the apples bloom late they normally avoid the freeze problem. Its also warm and wet during bloom so fireblight can be a big problem on the apples.

Nice Rick,
It looks like the high density is working well for you. I thought it was supposed to look like that, and those look so easy to pick. I like how no fruit gets hidden in a deep canopy, and less guessing with spray coverage on the leaves and fruit. Such a pleasant arrangement.

looks great!! not a bad problem to have…

I was asking @marknmt if the recent cold and snow that he had in Montana affected his apples. You are in NC, right?

I thought Fuji didn’t ripen until October, I suppose the heat you’ve been getting has accelerated ripening times?

Those trees are packed, congrats. How are your Winesap’s doing? I understand your Stayman’s have a tendency to split? I imagine all that rain won’t help in that regard. How have the Roxbury Russet’s done?