Training branch up trunk to become a scaffold branch

I trained a branch along the trunk in an attempt to turn it into a scaffold branch higher up the tree. I was wondering if this is a waste of time? My hope is eventually the trunk will grow around the branch and a nice crotch angle will form. 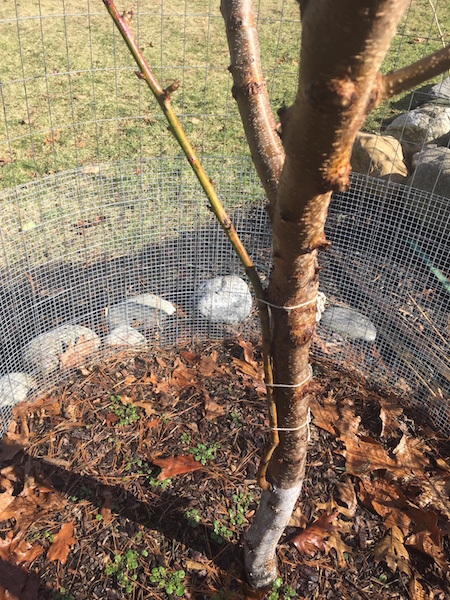 I would cut that off. You’re asking for problems.

Agreed. I would t-bud that location in summertime if you really want something growing there.

Ok I will cut it. How do you T-bud? I was under the impression you just make a cut in the bark with a knife and below it a branch will form. If this is the case, when should I make the cut?

I was under the impression you just make a cut in the bark with a knife and below it a branch will form.

That’s called notching and it works pretty well. But you have to make the cut “notch” above a dormant vegetative bud. Not just some random location. The notch needs to be deep enough to get into the sap wood to disrupt the flow through the cambium. I’ve been notching about a 1/2" above the actual bud and it’s worked well for me. I create a “V” style notch.

Ok I will need to look at the trunk tomorrow to find a bud. I doubt I’ll find one. Looks like T-bud is the only option. I saved the scions from my Redhaven peach tree and will use those or go to the scion exchange. When can I T-bud? After petal fall?

I’m little confused by this and would like to learn from it. What is wrong with that limb? It looks like if it were untied that it would have fairly normal crotch angles, no? I’m also not completely clear on the difference between a branch and scaffold branch. I thought any main branch coming off the trunk was a scaffold, so what do you/he mean by wanting to "turn this branch into a scaffold branch?. Thanks…I’ve got a lot to learn still!

Kevin, I think his reasoning for tying the branch up there is that the existing scaffold branch is too low for his liking. It appears to only be maybe only 6 inches off the ground. I think he wants to get it up near 18 inches or so from the look of it.

I think you are right in that any branch coming directly from the trunk is a scaffold.

That’s a completely wacky and crazy idea and I’m jealous that I never thought of it. I can see how it could work quite well- like one of Bill’s (Auburn’s) foot-long grafts only with a built in nurse branch and food supply.

Here’s what I’m thinking would work:

So there it is: one crazy, wacky idea after another! I say go for it, see if you can make it work, send pictures good or bad.

What do others think? Worth trying, or just too wacky and crazy?

ps- get rid of the string! It will only serve to throttle the branch. Except: if you lightly but firmly bind the branch with string just below the graft you may be able to make it severe itself once the graft takes off- which I think would be a pretty neat- dare I say elegant? -trick!

Thanks for the clarification, Dave. Makes sense, though I thought most people preferred low limbs if they are lucky enough to have them that low. Easier to maintain, pick, etc. I guess its personal choice tho.

Mark, I wish I had thought of your idea. I ended up cutting off the branch and will try to do a T-bud. I have no experience with grafting so I would prefer to do the easiest method possible. I actually spent all last summer attempting this whacky idea. My understanding based on my research last summer was that the trunk envelops the branch and eventually you can cut away everything below where the branch was enveloped by the trunk. Sounds like your method would be the real way to attempt what I gave up on.

Wouldn’t know without trying- at any rate, good for you for thinking of it; maybe another day you’ll have more grafting under your belt and feel like giving it a try.

I don’t doubt that somebody here has already done it, but that’s not the point. It’s just nice to understand how, and whether, things work, and to try them out!

6-Benzylaminopurine, benzyl adenine or BAP might be another option to get a node to sprout a new branch where you want. Mix 2% BAP with Lanolin and spread a little on a node.

Is it possible to graft a scion onto the trunk? I was looking into T-bud and it seems you need to wait a whole year for the bud to start growing a branch.

You can’t T bud onto that trunk. The bark is too thick and you are unlikely to get a take. Even if the bud did take it probably won’t grow out to form a branch. Even if it did grow it’s not likely to have enough vigor to ever catch up with those other branches. You’re facing pretty much the same thing if you graft in a scion.

Keep the branch you have or train a limb from one of those other branches to fill in the canopy area you need. From your picture one can’t really tell but you probably don’t need another branch to make a full canopy.

Think about how to train a vigorous limb to do what you want.

Another wild option if your creative is to side graft a long scion and make your limb exactly where you want it. With a little extra work it can be done. I have added water sprouts up to about 3’. Pears and apples are the only two I have tried this on. I did this for entertainment so I really don’t know how practical the method would be to duplicate.

You can graft a limb on that tree if you are a way better grafter than me. But unless it’s placed high in the tree on a branch that’s been cut back it’s not going to have any vigor. Anything placed or forced to grow in the vicinity of the current branch isn’t going to grow with enough vigor to matter.

When we graft it’s usually on a limb or whole tree that’s been cut back. That removal of current growth is what gives the graft the vigor to take off. Placing a graft low on a tree without cutting anything off is a sure recipe for low vigor or worse a bud/graft that doesn’t push at all.

The current branch is low and lacks vigor. The vigor can’t be improved unless a lot of the rest of the tree is removed. 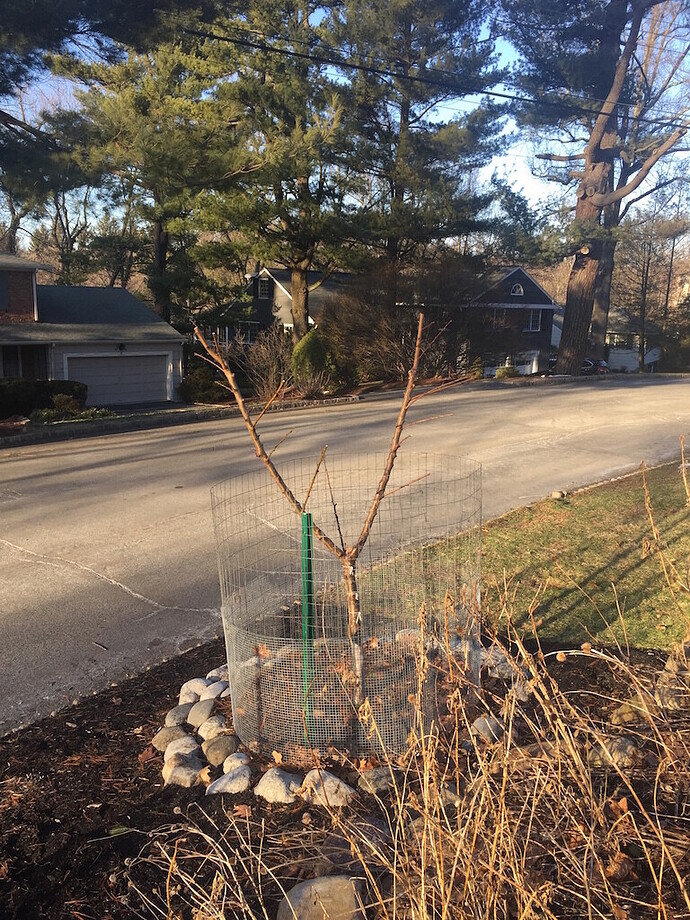 So this is the peach tree. I feel like the scaffold branches are starting to become too vertical. I removed the little branch in the middle (see first pic). I suppose I can somehow shape the tree so that I don’t need to create another scaffold branch. Do you recommend a way to get the scaffold branches more horizontal? Maybe use rope to tie the branches down closer to the ground?