Two-tiered deer fence -- how skimpy can I go on second tier?

Just found this forum, I’m very excited! I tend to write long posts so I tried to write a short version and include context at the end. Also, I read some other threads on this topic but didn’t find any setups very much like this. Appreciate any advice!

We bought a house that came with a fenced-in backyard (yay)! It backs state woods, so we see deer all the time. The fence is four feet high and looks somewhat like this: 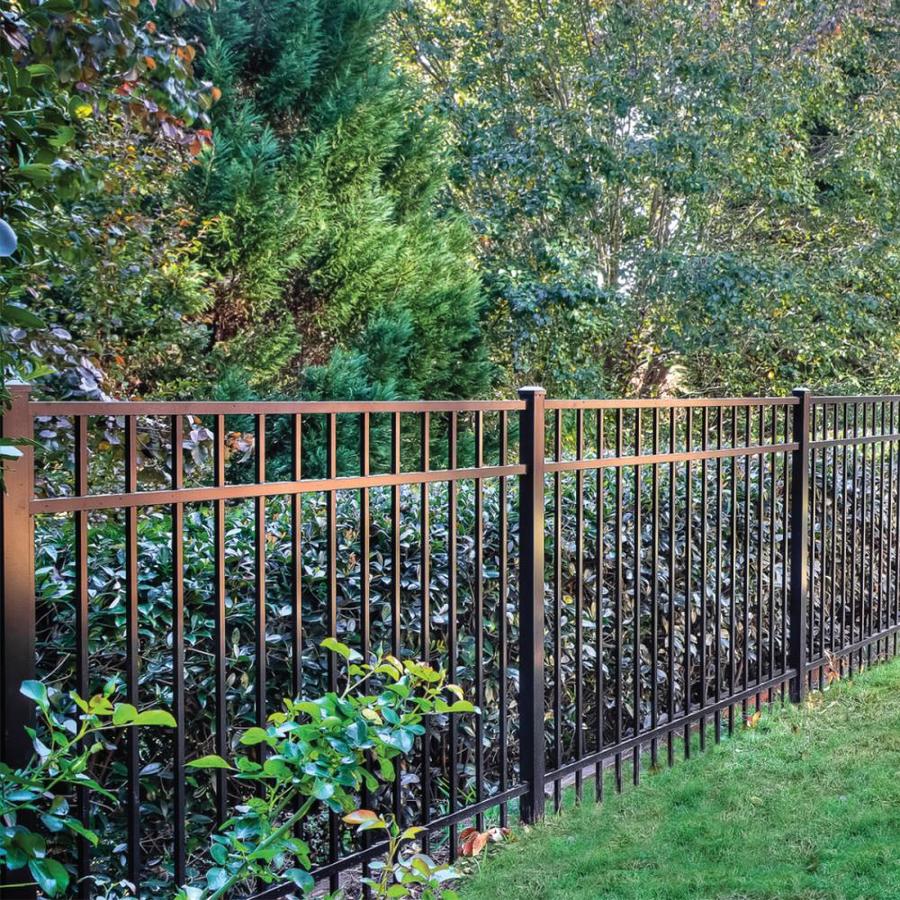 I want to deer fence the backyard in preparation for planting fruit, and I’d like to incorporate the lovely and durable fence. But I don’t want to potentially anger the neighbors by extending the fence 3’ vertically with poly mesh (also worried about bird entanglement; we have feeders).

I’m wondering if anyone has experience trying a two-fences method where the outer fence is as specified and the inner is visible non-electrified wire (perhaps with CDs at first) hung about 6 ½ feet tall and 5 feet back from the fence. What do you think? Or maybe a second wire at 4 feet would be necessary? Just one wire we could walk under would be great. Would it be worth combining this type of fence with laser deterrents, etc?

Got the idea from here: 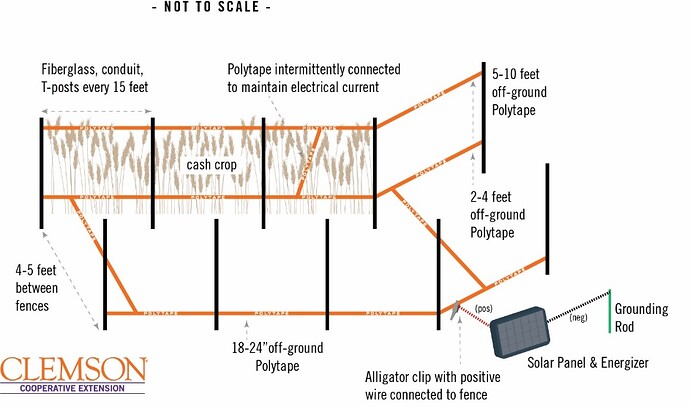 Deer damage is a problem each year for homeowners growing fruits and vegetables. Crops commonly targeted by deer can include but are not limited to:...

Deer have come in the yard but only eaten the tips off my eastern azalea (clearly a favorite), nothing else. I want to buy a trail cam to help see if this fence works, but not sure if I will know until we have a lot more deer candy around and a lot more at stake.

The eventual plan is to plant a hedge of blackberries and other useful bushes 5’ in to make the landing zone messy and hopefully hide some of the other sweet treats from view, but that will take time, obviously.

I have had good luck so far with my double (or 3d) fence setup for my veggie garden. I don’t have insane deer pressure, but I always have a doe or 2 with fawns that claim my field and nearby thicket as a summer nursery.

Your setup should be plenty tall/ sturdy I would think, it’s really the depth that plays with there eyes and makes them nervous so they don’t jump… even if they can easily. I would encourage you to add a strand of electric fence along the outside perimeter if at all possible if you have heavy deer pressure.

Here is a pic of my setup last year (sorry it’s not the greatest). 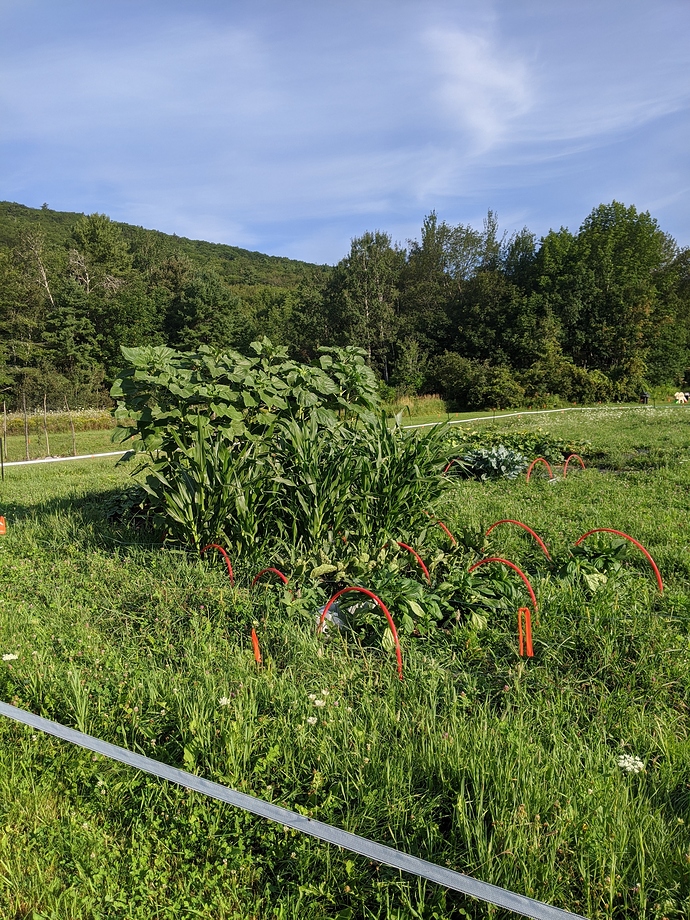 Adults and fawns alike never breached this setup once, but they did my single 4 strand electric fence setup around the apple trees once (I think they ran through it).

Edit: just found another pic that shows it a little better. 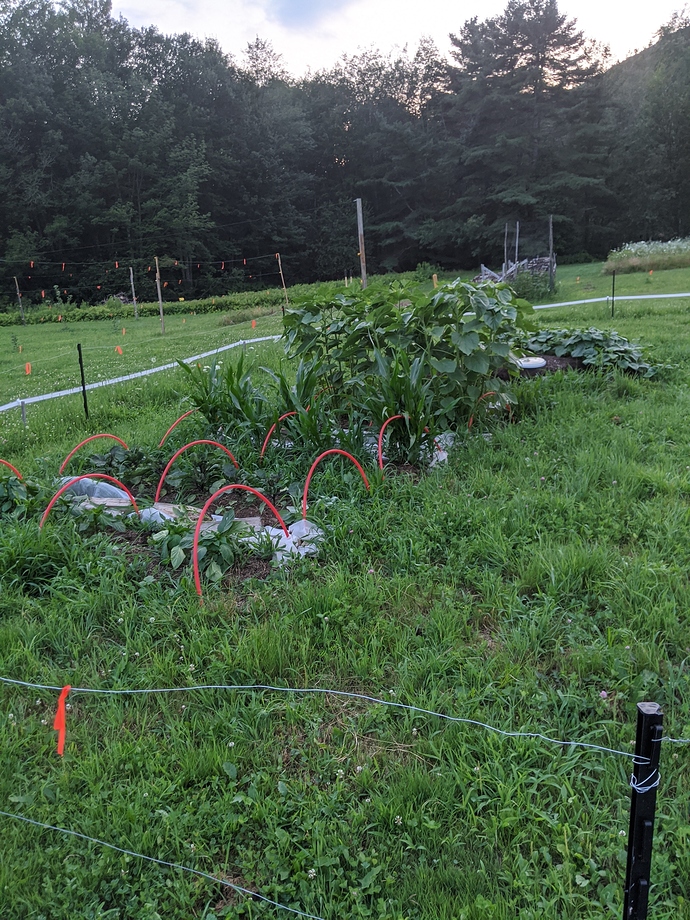 I have a 4ft fence (outside perimeter) and a 6ft Fence inside perimeter. 4 ft space between fences. Very heavy deer pressure in my yards but they haven’t attempted a jump yet. I do have dogs that are in and out during daylight hours on the inside perimeter

A crossbow might work if you can’t use a rifle or shotgun?

Everett and GeorgiaGent, thank you both! Everett, thanks especially for the pictures. It’s very reassuring that they don’t try, even with a much shorter fence – I don’t know how the pressure compares, but it’s good to know that it’s not a completely ridiculous place to start either.

BlueBerry, we’ve been crossbow window shopping, actually, but that’s a whole other conversation

There’s no crossbow setback in my state, but none of us are experienced with crossbows and I worry a lot about wounding a deer and having it run through our neighbors’ backyards or onto the no-trespassing state land and being a cruelty and a waste. So the first try is definitely fencing, but I’ve definitely considered the pros of a full freezer. (Butchering we can do.)

Your best deterrent is the dog. I wouldn’t spend any more money on fencing because you have a built in scent deterrent to deer. Plant away and only fence more if you see damage. I have witnessed a deer clear an 8’ fence flat footed, it looked like it was floating.

How far apart do the two fences really need to be? I have read 4-5 feet, or angled,but am wondering if I can do 3 feet, or use close-set trellising as an extra bit of depth perception confusion.
Dogs never work for me, the deer either ignore them, or learn to come at night. I don’t have 24 hour outside LGD types.

My set up is 3 foot spacing. Again, I think it’s heavily dependant on the deer pressure you have. A desperate deer could breach my set up…but it seems they have enough other food options around in the summer so they don’t bother… especially once they sniff the electric fence once. I would call my setup a good “deterrent” and the bare minimum to start from. Increase height as needed for your deer herd.

Now if only this setup worked for my resident voles

I have an update to this thread for anyone coming across it:

It turns out that so far (one summer and one winter, but with not a lot of deer candy available yet since we’ve just started growing), this seems to be enough: 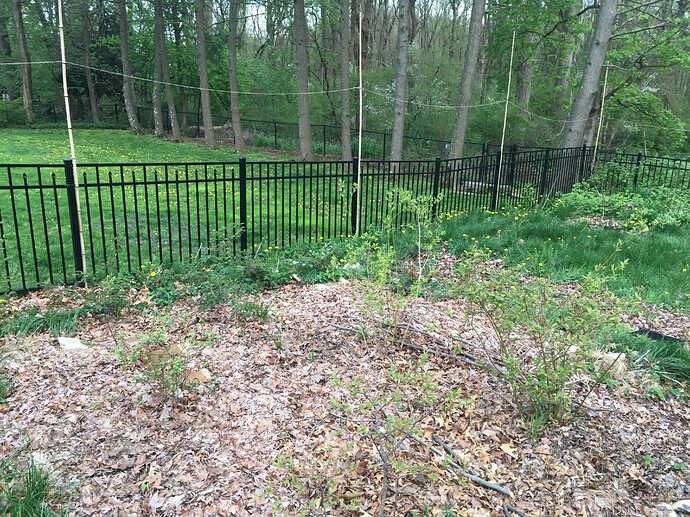 Yep, that’s the preexisting nice metal fence, and some twine.

We have not noticed any damage since we put it up!

I hope this setup inspires anyone in a similar situation, although of course with more deer pressure it could definitely fail.