How many people think this will go over like a lead balloon? I think the grocery store consumer has already been to brain washed to eat anything, but pretty fruit? 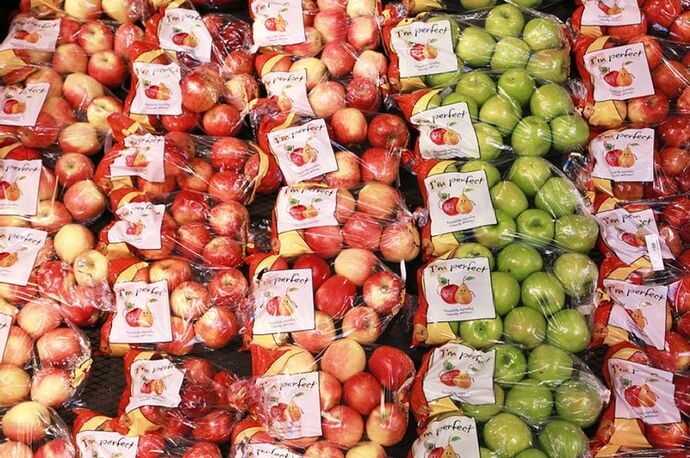 Cosmetically challenged apples are the company’s first foray into a global movement to cut food waste.

I don’t know if it will go over or not. I believe I’ve read it has worked in some European countries.

My gut feeling is that it’s a gimmick for good press. There’s really no money in selling low quality fruit for anyone. It costs the same to produce and selling a lot of ugly fruit at a discount can satisfy demand for the fruit while leaving growers a lower price for number ones.

I doubt it will be a very big market though. Big retailers are masters at making themselves look good without really doing much.

Here, since local is such a big movement, grocers say they want local, but want to pay the same wholesale prices they pay for the mega produce from California, which can be grown much cheaper.

They get a family picture of the local grower, get him/her to make a few appearances at their stores, put their pictures in the mass mailing sale bills and everybody is feeling good. Then the grower figures out he/she can’t break even at the prices being paid and quits. The stores will keep their family farm pictures up in the stores for a while even though they aren’t buying from them, till they can get the next local farmer to do it. It’s more or less a shell game.

It depends how the market reacts, it could be people in general eat more fruit, in particular people that don’t have the income to afford number ones. That would be good

But the price paid the grower for these is surely the price for processor-bound fruit, so all the growers could get is a bit higher demand for processor fruit. I doubt it will cut into demand for top quality fruit. I buy seconds all the time but its always to cook up a big batch of something with.

Well, maybe some of my cynicism is showing through. It would be nice to think Walmart really is committed to moving a lot of this fruit, and it would go into the hands of those who otherwise couldn’t afford fresh fruit.

There’s a group in the SF Bay area called Imperfect Produce. It’s like a CSA box of ugly produce. Runs about a buck a pound. I ordered a box - i’ll let you all know how “imperfect” it really is. (PS if you want to sign up - PM me and i’ll give you my info so you can say i referred you)

I love the idea of reducing food waste, and paying farmers for produce that would normally be fed to the animals or composted.

According to Consumer Reports these are the percentages of various foods wasted in the good ole USA:

Fruitnut,
Those numbers are surprising. We don’t waste anything in my family. We eat the fruit and the seeds, peels etc go in the compost pile.

We try to put everything we don’t eat through our chickens.

Chikn,
That’s even better and we did that with pigs and chickens historically. We don’t have either right now. The old timers here fed their cows pumpkins. That chicken manure is still benefitting my soil I applied 20 years ago. I dug up 3 feet of soil and filled the trench with 1 foot of wood chips and 3 inches of chicken manure and then several feet of wood chips with a thin top dressing of manure with dirt over all of it from the clay 2 feet down. I did that with a 15x15 area which took me a year to complete in my spare time. The dirt is very black and rich.

The thing is at the stores I shop I do not see 2nds offered now as a regular business practice. I am just as guilty as the next about picking through the displayed fruit to find the best of the best. I have often wondered what happens to the fruit that is routinely picked over in the display, they dont move it to the 2nds rack because it doesnt exist. But now they believe that they will have a market for 2nds if they simply bag them as such and put them next to the top grade? I guess time will tell.

I pick out the fruits that look the highest quality. That’s based mainly on color.