I received my seed potatoes from FEDCO today. Generally unhappy with them. I ordered 4 kinds. All of them came too large for seed potatoes, but worst is Red Pontiac - 4 tubers in 2 pounds! I know I can cut them, but this is what I usually try to avoid… Some of the potatoes have some skin defects, looking like some kind of disease. Will not order from them again.

Sorry to hear that. I ordered seed potatoes and onion starts this year from the maine potato lady. I’ll let you know how they look, I’ve heard great reviews.

I did order from Potato Lady before and material was good, but I have very small garden and really need 6 tubers of each kind, total 24. Their packages I think too big and because of that expensive. I tried to grow my own seed potatoes in sterilize soil in container but it is not easy to store it in the house setting…

Glad to hear there quality was good. I wish you luck and hope the fedco potatoes exceed your expectations (if they’re plantable… disease is never fun)

You can dig out a few articles showing that potatoes started from larger pieces make more large potatoes. That doesn’t help much if you wanted 12 hills of potatoes and only got 2 large spuds to cut up.

I personally prefer smaller potatoes in the range of an inch diameter for planting. They can usually be cut in half and make 2 hills per.

With Red Pontiac I try to grow smaller potatoes, not larger

. They tend to grow over a pound in size, I have to plant them 6 inches apart to get a reasonable size.

Honestly, FEDCO just doesn’t seem to have very good quality control on anything. I’ve stopped buying fruit trees from them because or poor/inconsistent quality (grafts, sizes, roots, damage)…and they have become very expensive. I am located only about 10 miles from them and love their annual tree sale when you can go in person and pick out the plants and trees yourself…but that has been cancelled for 2 straight years,

We switched to Maine Potato Lady a few years ago because of a better price, not any issue with Fedco’s quality. We’ve been happy with MPL’s quality and the varieties available.

I just received my potatoes from Fedco and they were very good quality, as they always have been in years past (I’ve ordered from them for many, many years). Some varieties just don’t grow small potatoes, and others hardly ever grow a big one. Once in awhile I make note of cut vs whole seed and haven’t seen any difference in the harvest. Sue

Each potato “eye” produces between 1 and 3 plants. If you plant a whole potato with 4 eyes, you could wind up with 12 plants in one hole. This produces a lot of small potatoes and, depending on variety, may produce very few large potatoes. Cut that potato into 4 sections each with an eye and plant separately and you still get 12 plants, but they are spread out and will make more pounds of potatoes as well as more large potatoes.

If you start with small potatoes say an inch in diameter, you may have to plant the entire potato to have enough starch to support one plant. That small potato probably has between 4 and 6 eyes. If all of them sprout, you wind up with too many plants in too small an area and not a big enough potato to push all of them into rapid growth. The result is predictably a medium sized hill with several small potatoes.

If you start with a large potato that weighs a pound or more, cut it into 4 sections each with one or two eyes, you get several large hills with many large potatoes. The problem with this scenario is that you pay $5 per pound for that one potato so on a per eye basis, have paid $1.25. It is not economic!

For the above reasons, I submit that optimum size potatoes for planting are about 2 inches diameter. You get up to 4 per pound and can cut each potato into 3 sections for planting. This gives 12 hills of potatoes at a cost of about 42 cents per hill. Of course, if you are purchasing bulk potatoes to plant, and the price is cheap enough, it makes sense to get mostly large potatoes because they are more productive of larger potatoes.

I got pretty much the same red bag of red pontiacs- basicly 3 largish potatoes. I cut them into quarters, keeping at least 1 bud eye in each quarters. We’ll see how it goes.

I am still waiting for my order from The Potato Lady.

We didn’t order any potatoes this year, so I can’t help you compare.

Potato Lady before and material was good

I didn’t order from MPL as I was a bit late and by the time got things together, MPL was sold out of a lot that I wanted.

I ended up getting over 50 pounds from Fedco. I planted the first of them today and thought they were pretty good quality.

The 2 pound bag (biggest I could get, as they were almost sold out) of Amarosa had a lot of medium small potatoes.

The 10 pound bag of Adirondack Blue has mostly larger potatoes. But, there were enough small ones that I was able to alternate large and small in the row. I didn’t bother to cut them.

I’ve found that planting small pieces yields a poor result, so I generally plant what they send. I may cut a truly huge one in half. Maybe I’ll need to do that for Magic Molly, as they sometimes get very large.

The Amarosa was $9 for a 2 pound bag, but most of the 10 pound bags (including ones like Adirondack Blue and Lehigh, Purple Majesty, and Natascha) were just $10.50 for 10 pounds. Magic Molly was significantly more ($30), but even that was under $5 per pound.

Here’s a pic with Adirondack Blue at the top and Amarosa at the bottom. 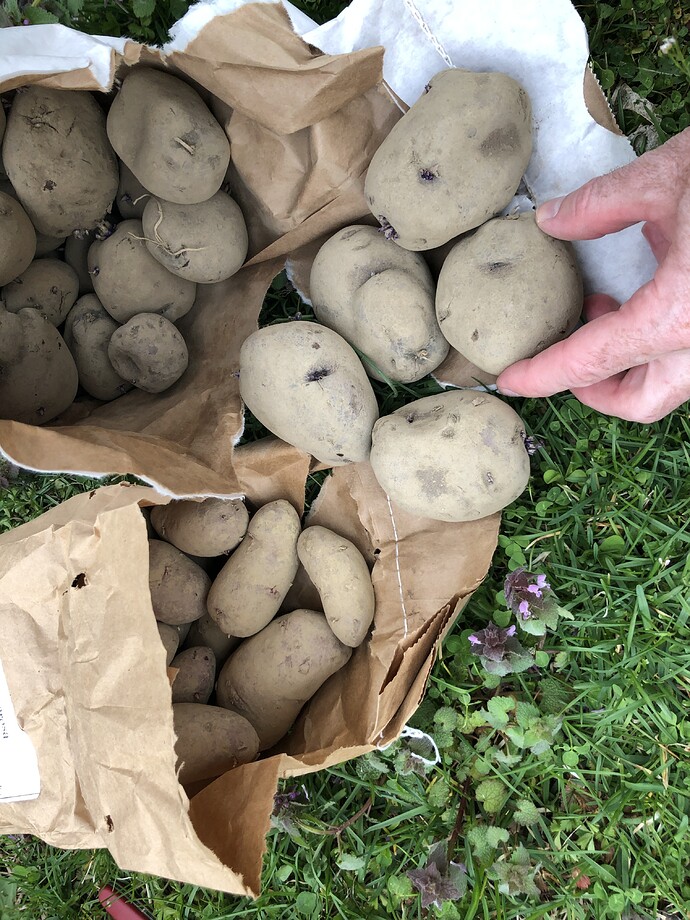