Last Sunday I had the privilege of meeting Bob Purvis in person for the first time and spending the day with him. I went to his church in the morning, and then after lunch we went over to spend the afternoon looking over his orchard! Later that night I was able to speak at his church. Bob is a great guy, and has a huge variety of quality scions available. In fact, I ordered a number of him a couple seasons ago, and all but one of them took. His site is https://purvisnurseryandorchard.weebly.com. He spoke well of this group and you Scott in particular. Here are a couple pics… 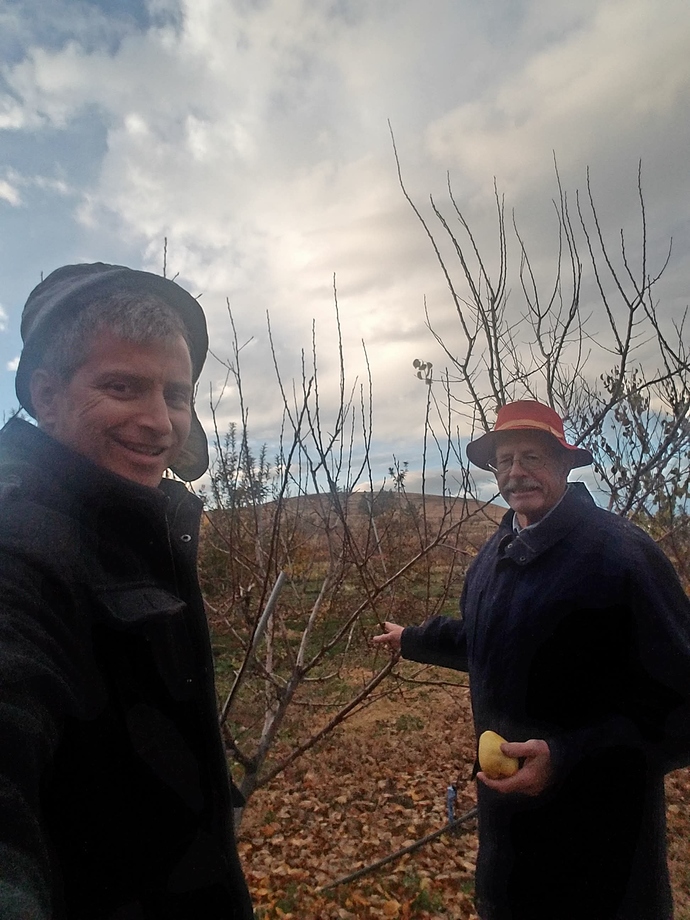 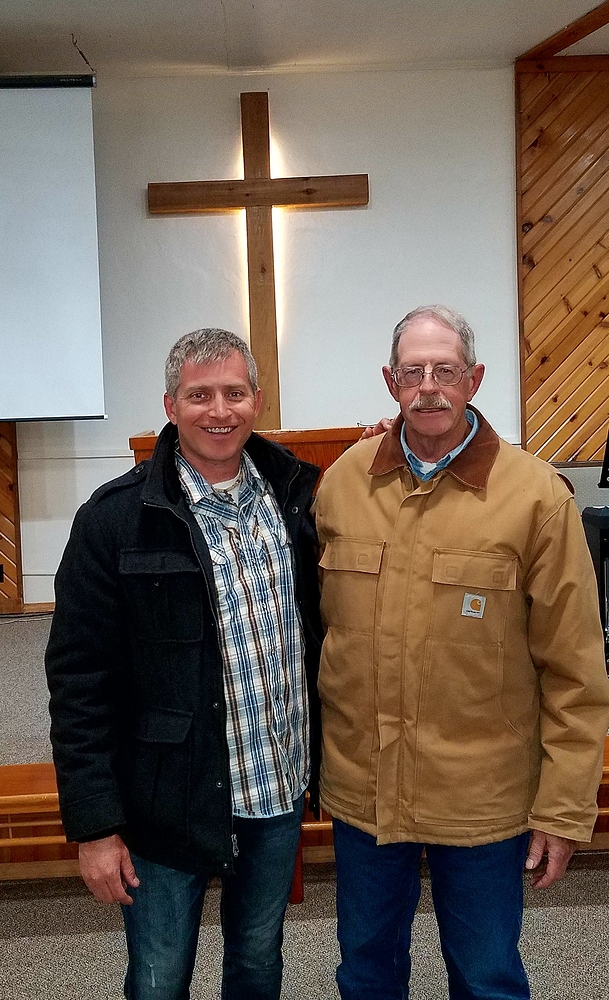 Cool. What varieties did y’all check out? I figure it’s a pretty big orchard? Whereabouts is his place in Idaho?

So, what scions have you got from him?

I noticed he has lots of apricots. Do they do well in your area?

I got a Jubileum plum scion that failed. Then an Afghanistan, Golden Sweet, Tomcot, Orange Red, Sugar Pearls, Sansa, Sweet 16, and Shizuka, and all of these took. Apricots are hit and miss here depending on how cold it gets in the Spring. He told me about a “K-something” that you spray on before you see a frost coming and it is supposed to help considerably! I’ll have to try it out next Spring. His orchard is an acre outside Homedale. Most of the fruit has fallen. I did try 2 fruit that were on the ground. 1 was a D’anjou pear, which was amazing! I also tried a Zestar apple. The texture was lousy, since it was on the ground a while, but man, it was the sweetest, richest, most interesting apple I’ve ever tasted. I’m ordering a scion of it next spring. He said that Sugar Bee apple is his favorite. He also really likes Yakima plum. He also was very impressed with Contender peach, and also a Harrow Diamond peach. The latter is a little new as well as a Victoria peach. His favorite apricot is Robada, which he says is somewhat honeyed when really ripe. He also loves all the Har series apricots. He also has an apricot that comes out in late May, which is his earliest. I forgot what it was, but when I find out I’ll let you know.

We were going to come back to try more of his fruit in his cooler after the evening service, but we ran out of time, so he’s mailing me a pack to sample!

As mentioned too many times on other threads, I don’t think apricots will work here, because of late frosts, even tho the Har versions might do a bit better. I think I’ll try at least a couple pluots next year. Do you have any of those?

We planted a Contender and Zestar this year. I haven’t tried the peach, but heard it’s a good one to have as far as frosts are concerned. Yes, Z is a very good early apple, we’ve tried them the last couple years from a local orchard. To me, it’s a milder version of Honeycrisp.

Are those all grafts, or separate trees? I remember you posted a pic back in March of a Franken-plum tree, are those on it?

How would you rank those 5 as far as flavor and production?

I’m looking into getting a FK and DD tree and adding FS and Geo Pride grafts later.
I’ve only had a DD, but heard that FK and FS are da bomb.

Multi-grafts. The King, Queen, and DD were on the tree when I got it. My tree is pretty young, and last spring I got skunked with aphids. Last year, I only had 1 FK on it, 1 FS, and I’ve had a couple FQs from the year before. I thought FK was better than FS as far as taste. I’ve read that the production on FS is sporadic. The FQs I had were probably picked way too soon and were pretty blah.

I have 1 multi-pluot tree, 1 multi-Euro plum tree, and 1 multi-Euro and Japanese plum tree. Hopefully next year will be the year I’ll have a good variety to sample!

I found that flavor queen is better when allowed to yellow. There never great, but they have a honey flavor when yellow and a little soft

Are your multi graft trees the ones I’ve seen Bay Laurel advertise, especially the pluot?

Got the Euro (Green Gage) and Japanese/Euro at Costo, and the multi-pluot I got at a local nursery, which they got from Dave Wilson. The latter was price-reduced at $10, and only came with FQ and DD (the FS had died).

Here’s what Bob just wrote me: "Rob, Apache is the apricot that came ripe May 29 in 2016. It came ripe June 7 this year, which is a more normal date. Apache blooms fairly early relative to many of my other apricots; in fact, its bloom is almost coincident with Westcot and Morden 604, the super-hardy apricots from the Prairie Provinces of Canada. It sells briskly because it is early and of good quality. There is a good amount of new growth on the tree if you wanted to order scionwood of it later this winter.