This morning, I visited with @BobVance at his home in southwestern Connecticut. It was nice he let me call on him at 8:00 AM on a Sunday!

He lives in a tory neighborhood of handsome houses built among rock walls and terraced ridges. It was a damp humid hazy lazy morning at his backyard orchard pitched on a south-facing slope.

Bob is using EVERY available square inch to farm his half-acre property. He has an astounding collection of edibles all over the place. The only exception: his wife requires he keep a tiny area of lawn mowed near the front door.

First we toured his mother of all cold-hardy mulberries collection and made a breakfast of our findings. My first Geraldi/Gerardi mulberries along with some strawberries! Very pleasant: 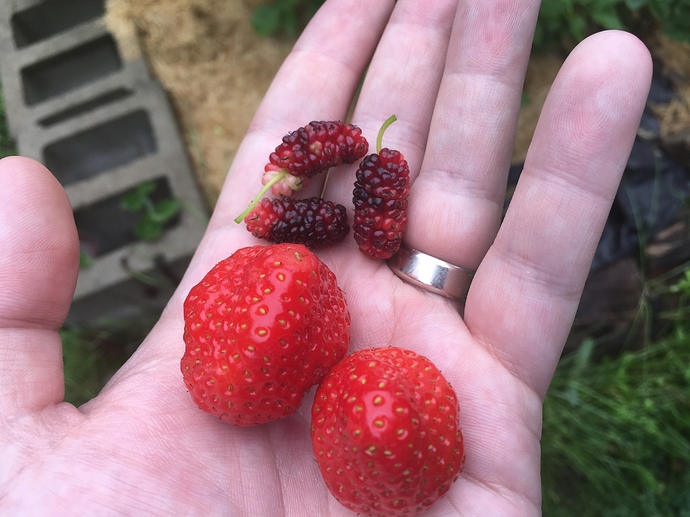 We sampled his Prelude raspberries as well. Yum: 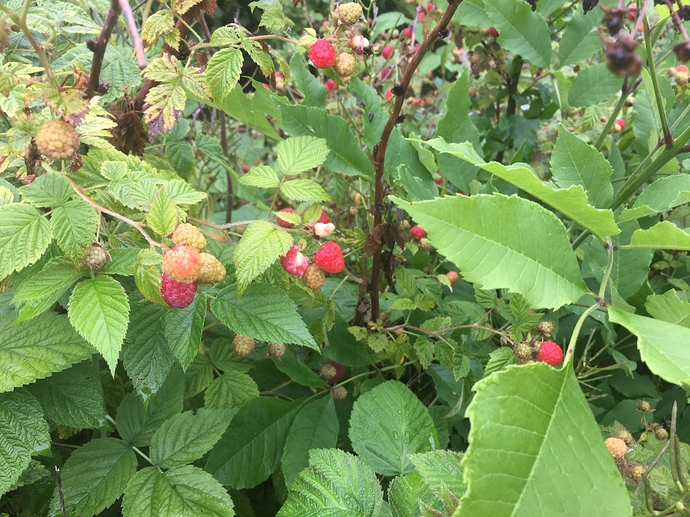 Bob’s yard defies the Laws of Physics. He insists he only has half an acre, but as we toured row after row (after row… after row) of plantings, I swear we must have tramped across at least three (3) acres’ worth of land (at least that’s what it felt like).

Just a few quick highlights from memory: Bob has a beautiful speciman of the Contorted So jujube. He has the peach White River of Arkansas and it is LOADED with a full crop. His Prime Ark Freedom blackberry laughed off this past winter and continues to thrive on his property. Not bad for CT!

It was very nice of Bob to take time away from his Sunday morning to show me around. And it was nice to see that the Blushingstar and Moniqui scionwood I had previously sent him were growing happily at his place.

Bob commented he had recently been to Chinatown (in NYC) and had purchased some tropical lychees, longons, mangosteen, and rambutons. Upon my departure, he gave me a few of each to take in a goodie bag. He also gave me a few potted clumps of Newberry roots. Thanks, Bob!

We snapped a quick pic in front of his leafy Kokuso mulb to chronicle what a jolly time we had. See you next time, friend! 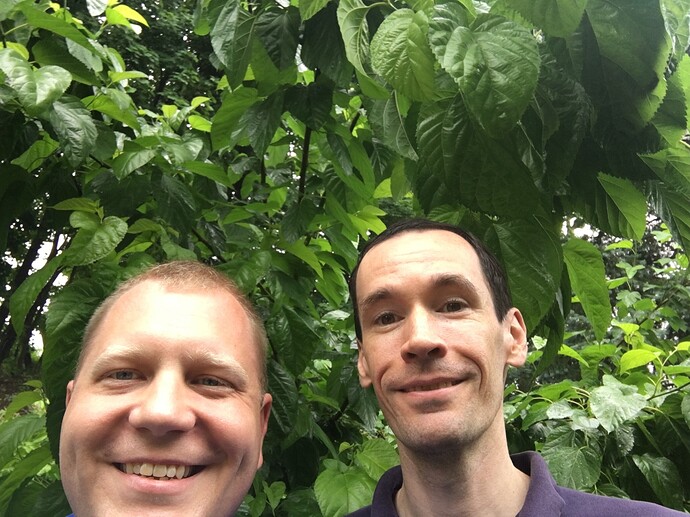 Thanks for sharing, Matt. Looks like a good time.

Awesome write up! Sounds like Bob has a fruit growers paradise!

So, who’s next on the GF member tour? Sounds like y’all are having a fun trip, seeing some nice gardens/orchards and even nicer members.

Looks like you both enjoyed the visit. Thanks for posting. You and Bob seem like really nice guys and best of luck on this years crop.

the Lychee fruit in Chinatown NYC is great, I bought some when I was there, yet I have only had their lychee fruit. I have not tried any other variety so I have no idea what the other varieties are like.

@Matt_in_Maryland, that is a great description of Bob’s orchard. Bob grow so many interesting fruit trees, bushes and vines.

Bob is a kind and generous host, indeed.

Bob’s yard defies the Laws of Physics. He insists he only has half an acre, but as we toured row after row (after row… after row) of plantings, I swear we must have tramped across at least three (3) acres’ worth of land (at least that’s what it felt like).

I was happy to have you visit Matt. It just felt like 3 acres because I talked your ear off for 2+ hours

I felt a bit bad about how overgrown things are in places- I kept finding myself saying (oh…I should really weed this part). In fact, you can even see a 3+ foot tall sapling growing in the prelude raspberry pic that you took. It must have been quite a change after @mrsg47’s finely manicured gardens.

But, to give everyone a sense for how packed things are, here is the general layout of the back. 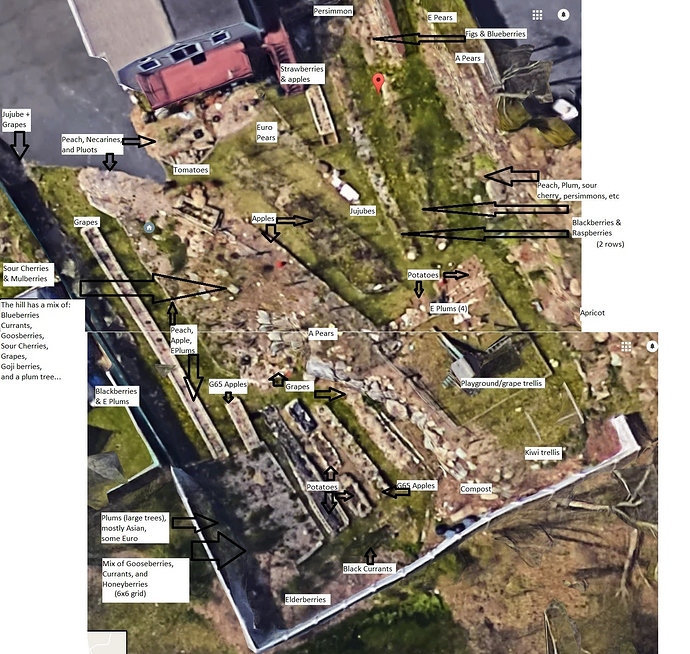 Bob commented he had recently been to Chinatown (in NYC) and had purchased some tropical lychees, longons, mangosteen, and rambutons. Upon my departure, he gave me a few of each to take in a goodie bag.

Normally it is my wife who goes there, so she may get a single kind. It’s rare that I am in the area, but I happen to be passing by the other day, so this time I was the shopper. Of course that means that I had to get some of everything (including 2 different colors of Longan). And they sell it in bundles, so it means I got more than I should (should, not can…) eat by a large factor, so I was happy to share. I’ll post some a thread with some pics and stats.

Matt kindly brought a jar of beach plum jelly from his trip to Cape Cod. I’ve never tried it, but am looking forward to it. If it is too good, I’ll need to add some beach plums…

My first Geraldi/Gerardi mulberries along with some strawberries!

I didn’t remember at the time, but I’ve looked it up and the strawberries are Cabot, from Indiana Berry. That wasn’t the first thing I couldn’t name on the tour. I found myself saying “One of these three blueberries is Darrow…” and “I’m not sure which of these blackberries is which , but they are …uh…Arapaho, and …uh…”. Aside from new stuff, or treasured favorites, I’m regrettably dependent on my records. But, it does get hard to remember, as I’ve got well over 300 varieties, not including the ~300 which have been grafted on.

I’m getting fonder of the Gerardi, both in terms of fruit quality and productivity. It is 5X+ more productive than other varieties on a per foot basis. I may end up cutting the other varieties grafted onto it off, just so it doesn’t shade out it’s close neighbors. After all, there are 5 jujubes on the North side of it in the row, which are a far higher priority. Also, it’s getting to the point where it is producing enough to consider netting. 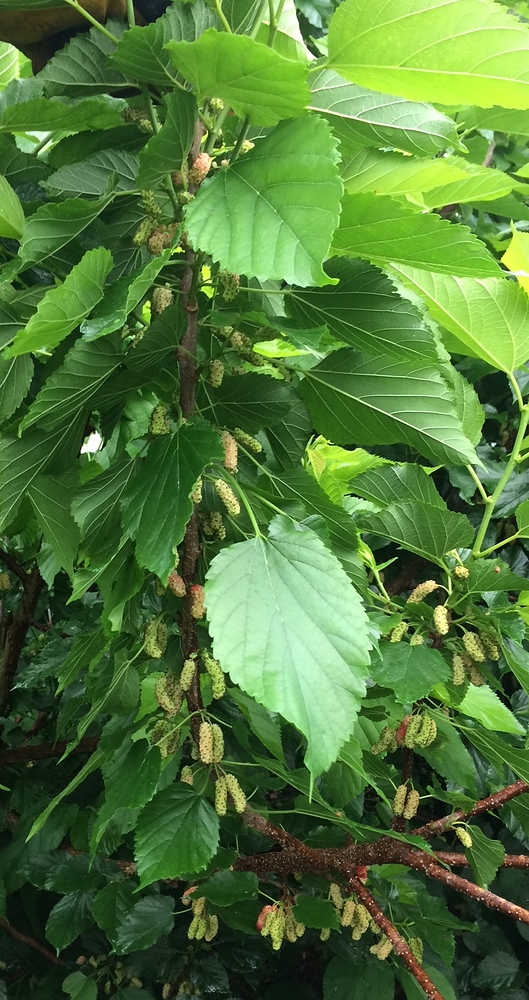 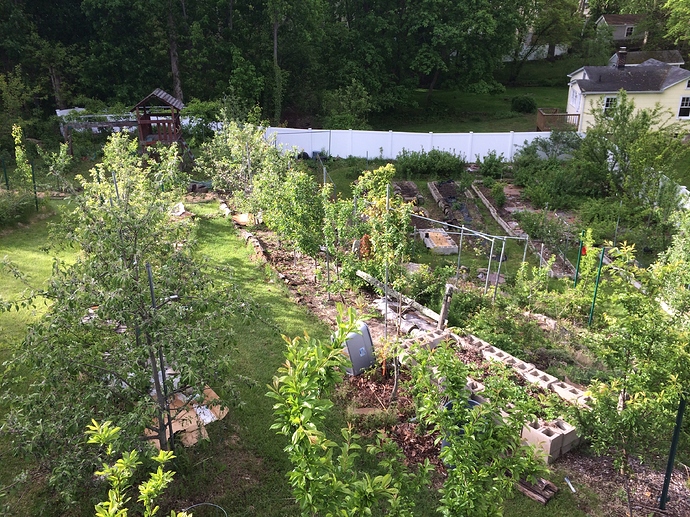 A view up the hill: 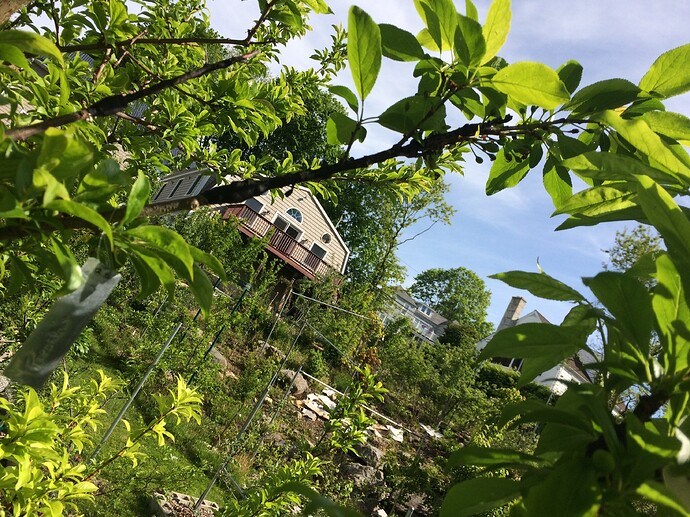 Potatoes at the bottom of the hill, with a apple trellis on the right and grapes in the distance: 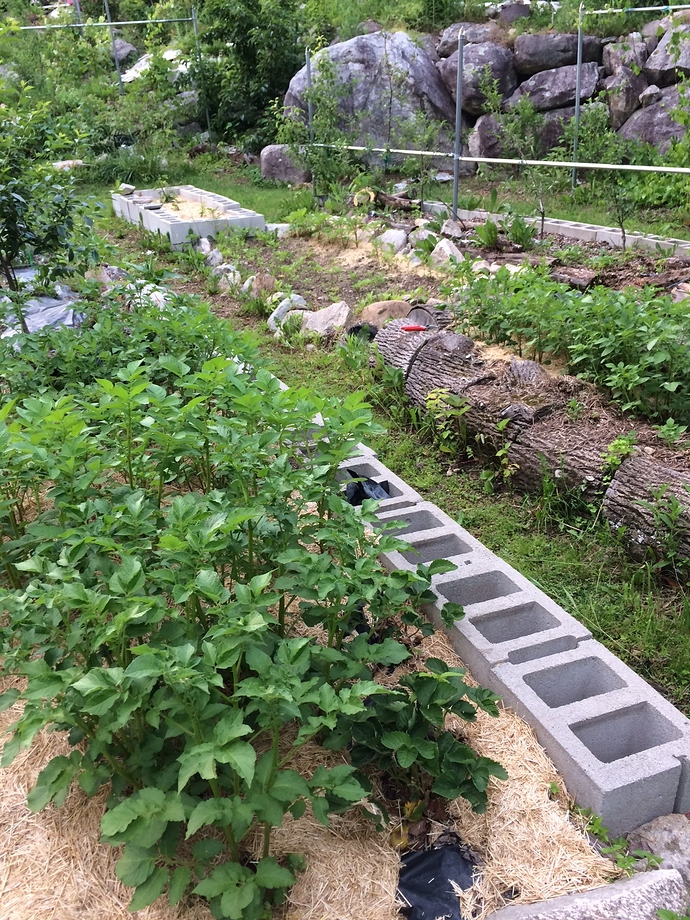 Love the visits! Thanks for the report, Matt, and the hosting, Bob.

Awesome yard, whats the slope top to bottom and how much elevation difference from backdoor to the compost pile? Great looking Yarden.

Fabulous Bob!!! I also received a jar of Beach Plum Jam from Matt, a really nice guy!!! I’m having my jam/jelly this morning can’t wait!!! Your gardens, orchards look terrific! I have weeds too by the way!

My favorite part is that the playground doubles as a grape trellis.

I looked at the boulders in the middle and thought you must be easily impressed. Then I scrolled up and saw the mountain trolls!

Well done guys! Bob, that is quite impressive how you’ve done what you’ve done.

whats the slope top to bottom and how much elevation difference from backdoor to the compost pile?

I got lucky today and the birds overlooked an entire branch in my Oscar mulberry. 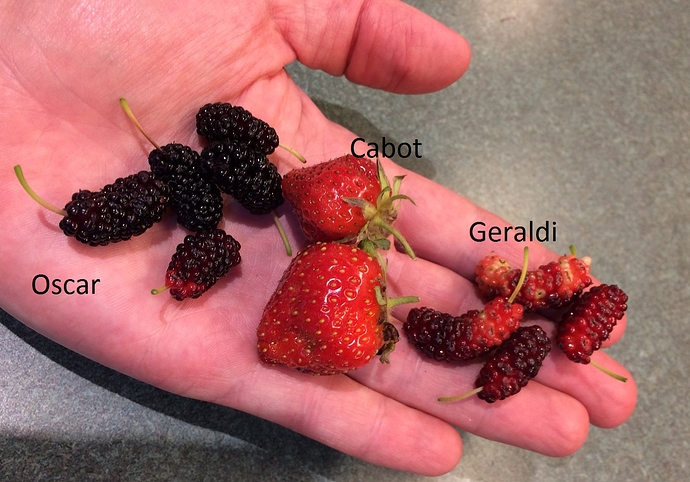 But, they weren’t as good as I remembered them. And the Geraldi have been better than I remember, even though I didn’t find any truly ripe ones today. I need a bigger sample to be sure, but I think they are in the same ballpark now. Which gives Geraldi a big edge in productivity and size-control.

You do a great job, @Matt_in_Maryland, of painting the picture of Bob’s place in a way that helps us all feel as though we were there- great report! @BobVance made things even better with his overview and other photos. You guys are both among the best people here so its nice that you got together. I’m not surprised Bob was a great host or you were a great fruit “tourist”. This kind of thing really does prove what I’ve felt since this site started: fruit growers really are just a great group of people! THanks for sharing. 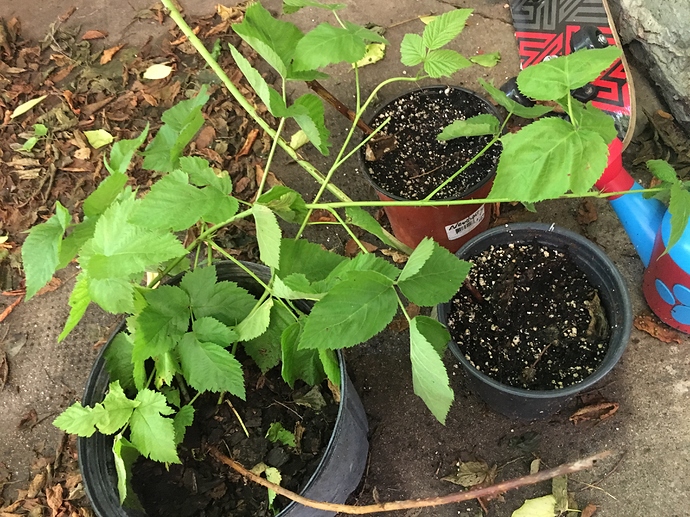