This is rather odd. About two years ago raspberries started growing next to a structure. I do have wild raspberries and bred raspberries, but none near that spot. I figure some bird pooped seeds there. This year out of neglect they grew to fruiting size and they are not like anything else growing around.

Wild ones are small and round, heritage are medium and round. These are very big, and pointy. So far they taste more acidic but I need to let them ripe more for a good assessment. They are ever bearing and with no care very productive, wild ones usually put out a meager crop.

What are the candidates for large, pointy, more acid than sweet, everbearing, zone 4 raspberries? They just seem too large and too productive to be wild. They seem to ripe later than my heritage but that could be lack of care. 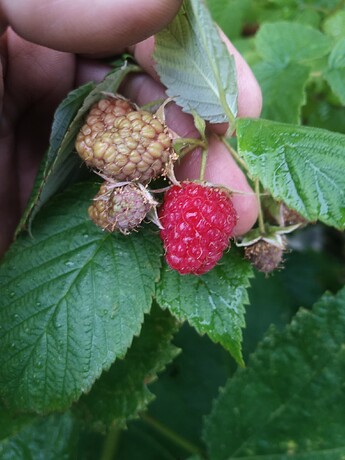 If its a volunteer, it won’t be a known variety, right? Are you thinking it somehow got transplanted or rooted there?

The reds in the pic below are some heritage that i harvested back in June here. For me… in my location and growing conditions… they can vary from medium/roundish to some pretty large and more conical shaped (more pointy).

I have spread mine around some and have some that get a bit more sun than others and with the heat we had this year noticed the ones in the more sunny location started ripening sooner and finished ripening sooner.

Perhaps your light, soil fertility, ph, something is just more favorable where they are doing better ?
If they are herritage… that might explain why. 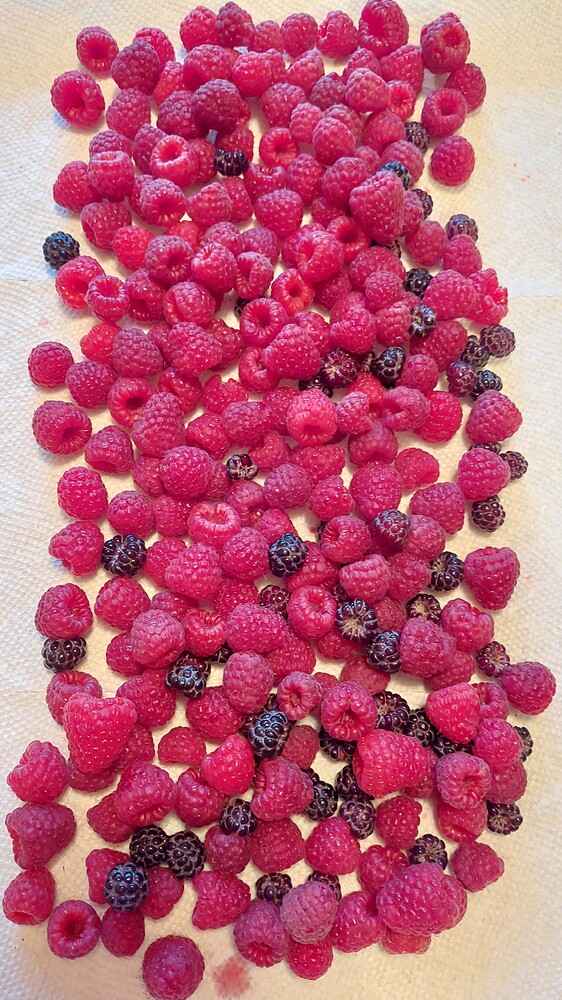 My heritage are mostly round. These are definitely pointy/long. They are significantly larger than heritage, as large as red mammoth. I do have red mammoth but those came after these started popping on that corner, and red mammoth are another rounded raspberry.

I can only imagine bird seeded them. I have been here for six years and I only noticed them about two years ago. They look too improved (fruit size, productivity) to be from the wild ones.

There is a good chance that raspberries and rhubarb are the most common edible plants around here, just about everybody has them either by design or the fact that they refuse to die, care or no care.

What are the candidates

Your report of more acid than sweet…and ripen later than heritage makes it a candidate for removal. If you said its sweet and ripens earlier then you would have a favorable candidate for a ‘new’ variety.

Pequot Lakes is a good example - Jim Fruth after tasting many berries at the local farmers market found one that he really liked…it was sweeter and bigger than the others. He planted those seeds… then selected the one that was the most winter hardy, the sweetest, best tasting and biggest. The others that did not show those traits were culled. He named the best one… and propagated it.

I have done several seedlings myself… and all are currently in locations for the birds… they did not pass my taste requirements…but the birds are fine with them.

Maybe not, the fruit size and productivity makes them interesting enough. Most of my raspberry eating (around 15~20 pounds a year from my bushes?) is not fresh anyways.

Heck I make wine with my surplus fruit and that acidity can come in handy. Have you tried wine grapes? Compared to table grapes you would think that they are substandard and yet they have their ideal use.

Anybody care to take a guess as to what variety they may be? They are huge, sour not in a bad way, hold very firmly to their stem, and are dark ruby red. The picture doesn’t show it that well but darker than other red raspberries I have seen. 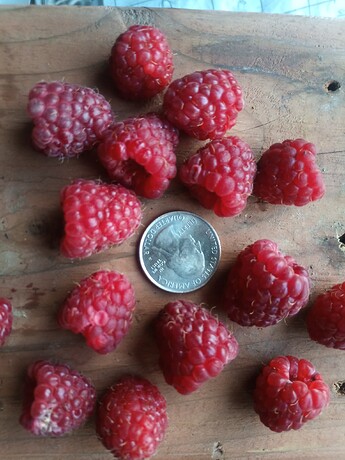 That is a nice sized berry… some of my largest herritage get that size… but most are smaller.

Heritage is the only red that i have currently… may add some Joan J next spring. 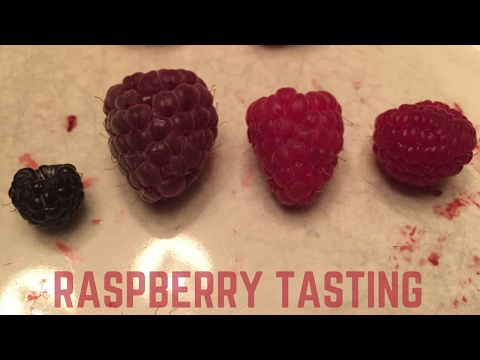 You might check this VT Vid… raspberry taste test … the little girl is adorable… they try purple royalty, boyne and taylor… and niwot a smaller black.

Anybody care to take a guess as to what variety they may be?

Your original description made it pretty clear this is a volunteer seedling. I feel condiment that “seedling” is its id.

I’m not so sure, the berries are just too big and the bush too productive. There are wild raspberries around and I pick some both around my land, near work, and while hiking. I have not seen any like it. Those are the usual small berries with low productivity.

the berries are just too big and the bush too productive

All large fruited and productive raspberries started as seedlings at some point.

It looks similar to the Taylor raspberry in that video… but they said that Taylor is more sweet less tart… their best tasting raspberry. 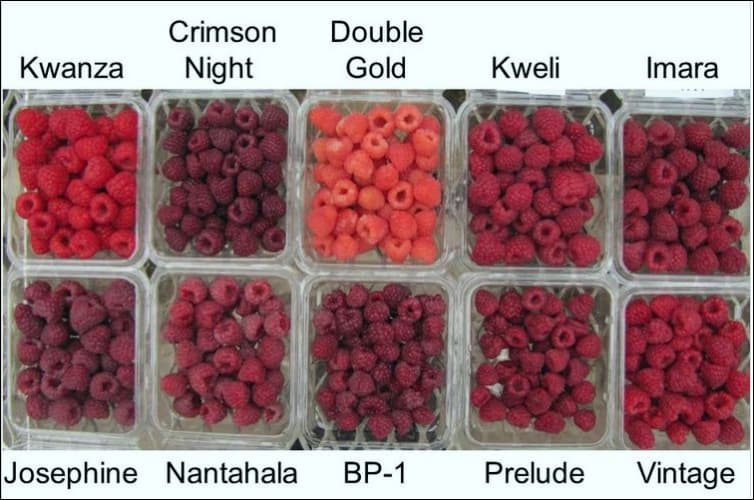 image754×500 54.7 KB
But those are fall fruiting varieties… from a Michigan article…

It looks similar to Latham Red (Starks Picture of it anyway). 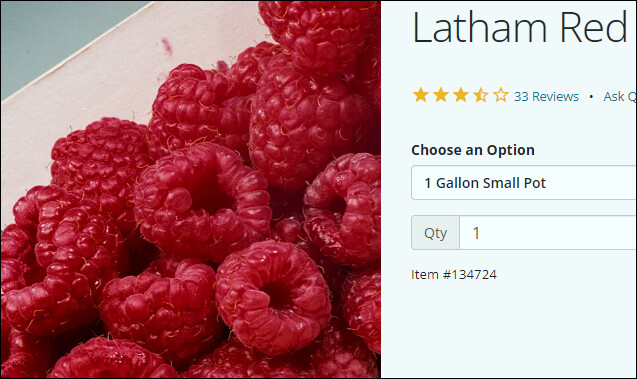 they say it ripens mid july.

it looks similar to pics of Caroline Red that I see online (isons). Below their description…

The Caroline Red raspberry plant produces heavy crops of large raspberries with fantastic flavor. The further south you grow it, the earlier it ripens. Very vigorous canes produce huge crops of large, firm raspberries and is more tolerant of root rot than Heritage.

All large fruited and productive raspberries started as seedlings at some point.

Yes, before they got breeded into something more tasty and productive. In a lot of cases 10 thousand get seeded from selected cross pollination, from there thousands get planted, and then hundreds get selected for further breeding. Often we get lucky because improved varieties mix in the wild with either native or other improved variety and the chances of something good increases.

I have munched on plenty of wild raspberries, they don’t grow this big here. Heck it can indeed be a cross pollination with a wild one, or a known variety. I’m just curious and would like to research it.

My daughter likes them but she does have a taste for sour berries, she prefers sour cherries over sweet cherries. I think they can make a good preserve with less sugar, what they lack in sweetness they make up in intensity.

Rest assured that of any given 10k seedlings from improved lines there will be plenty with large fruit as well. The fact that only a minority are chosen out of any given grow out is not to say that the majority are no improvement over wild types. Your seedling sounds great, but probably would not make the cut if compared against 10k seedlings from a breeding project. You should keep it though. It sounds great.

You’re not gonna get a name match for your seedling to any existing variety. Even it it was from a self pollinated improved form from elsewhere in your garden that name won’t carry over to it cause unless a plant is homozygous for every gene there will always be variations among seedlings when self pollinated (unless it sets clonal seed which I’ve not heard of any raspberries doing).

What imeant to say is that this one looks too big and too productive to be a wild raspberry. I’m just saying that it took a whole lot of breeding for us to get our garden variety raspberries

Yes, your seedling certainly does appear to be from a cultivated lineage. Your description makes it clear this is a seedling though so it does not have a name and any attempt to assign its identify to an existing cultivar name will be misguided.

Not necessarily so. Self fertility and polyploidy of raspberries leads to them being one of those plants highly likely to grow true to variety from seeds.

I don’t really have a horse on this race, just a curiosity. If there is somebody out here with a similar plant let me know, I would just like to compare features to see if I can get a proper ID. If not no biggie, I’ll just relocate them to a more ideal spot so I can just eat them.

Self fertility and polyploidy of raspberries leads to them being one of those plants highly likely to grow true to variety from seeds.

It’s rather hard to find a source for polyploid red rapberries. Most if not all commercially available red raspberry cultivars are diploid. Additionally, those which have been intentionally bred are often derived from multi-generation crosses incorporating genetics from many different varieties. I don’t think there are any line bred cultivars which are homozygous enough to reliably come true from seed. Similar of course, but not “true”.

I will reiterate: You’ve described a seedling, not a named variety.

Ok, you convinced me. I’m looking forward to transplant them to an ideal spot to see what they do with proper water and good soil. I’m pretty amazed at how well they did as it was; we had the driest spring/summer I have seen; up until a week ago I don’t think we had more than half an inch of water. My lawn was downright crunchy.