My understanding from what I’ve read and heard is that Warren requires about 800 chilling hours which is probably rather steep for most areas in Florida.

My Magness has lots of flower buds again on ohxf333 and warren has a few on callery. I realize this is an older thread but im commenting because many pears make you wait 12 years or 7 years so to see flower buds is remarkable. You know i cheated and used a 2 year old callery and i grafted half the tree to karls favorite aka ewart which has fruit buds also. Thanks to @TheFluffyBunny for the tip on pollination i added a pollination partner on the same tree.

I have five flower clusters on my warren on ohxf 97 from century farms planted in spring 2016. Leaving nothing to chance, im hand pollinating those suckers. Last year i tied down the branches to a shallower angle, maybe 30 degrees above horizontal. Not sure if that made any difference. Its a slow grower for me. Its about 8 ft tall.

Century uses OHxF97 as its rootstock, For me in clay soil, OHxF97 is very slow growing.

No blooms on my Warren. Looking forward to your review when they ripen.

I am growing pears in a Belgian fence and while it is very early days yet, I’m hoping that the criss-cross of branches will also encourage cross-pollination.

My experience is graft ewart aka karls favorite with warren and the blooms overlap. The fruit of both are excellent with warren being exceptional. I think @TheFluffyBunny and @Lucky_P both made suggestions about it but thats so many years ago its hard to remember. They comnented about pollination issues and so i think i found a pear that overlapped its bloom or they may have told me. Those guys have grown pears like me a very long time. Here is another thread Is it worth it to grow the Warren pear - #56 by clarkinks
This is my tree and thats warren with a red blush on the left ewart on the right which is green. Both are very delicious pears. They are not in the class of my small yellow pear yet when its at its best. They may exceed its quality at some point i hope. Warren is a light producer but high quality. My yellow pear has a horrible 1 day ripening window and rots on the tree if left to long or does not reach quality if not long enough but when its at its best its superb! These are all exceptional like others in the same class as comice. Chosing which is best is difficult. Whichever one your eating is best at the time! 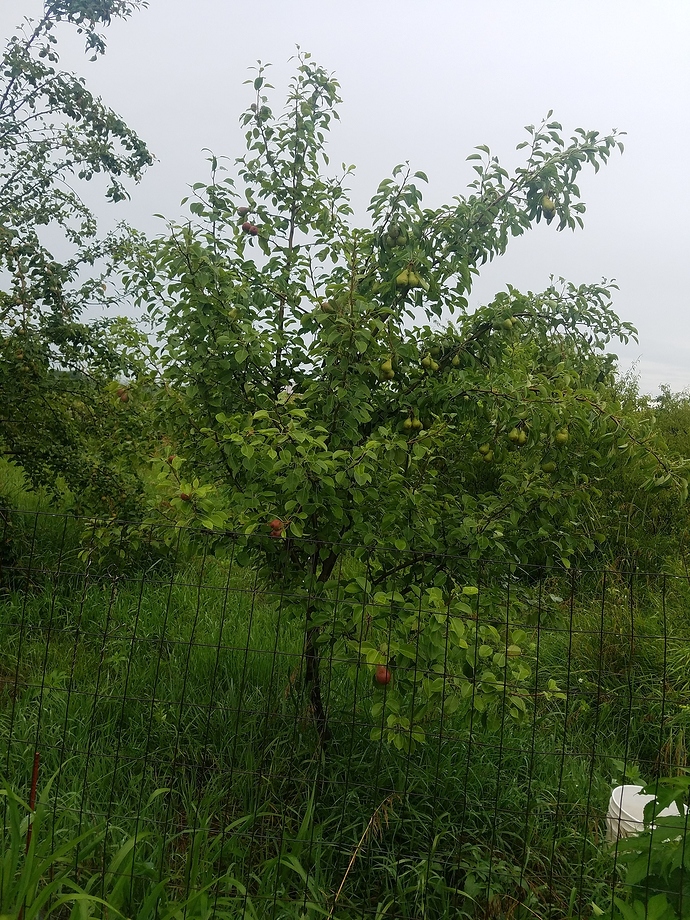 Can you guess what this pear is Clark? Not Warren or magness for sure lol. This is a second leaf fondanta de Mullins lille, on Bartlett seedling roots, about three feet tall. I have a magness on ohxf 87 that is years older and bigger that shows no signs of blooming 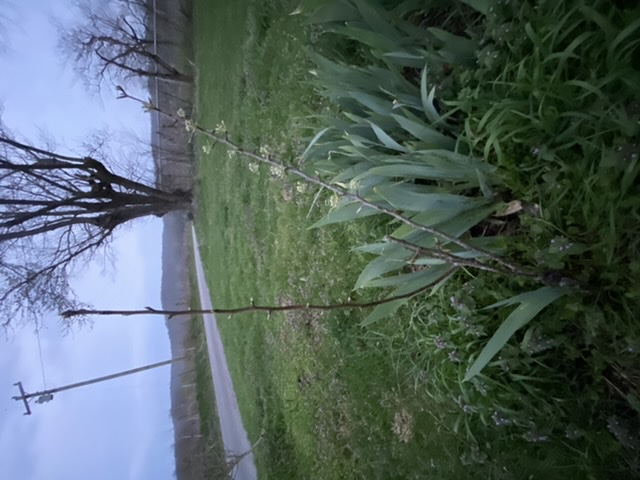 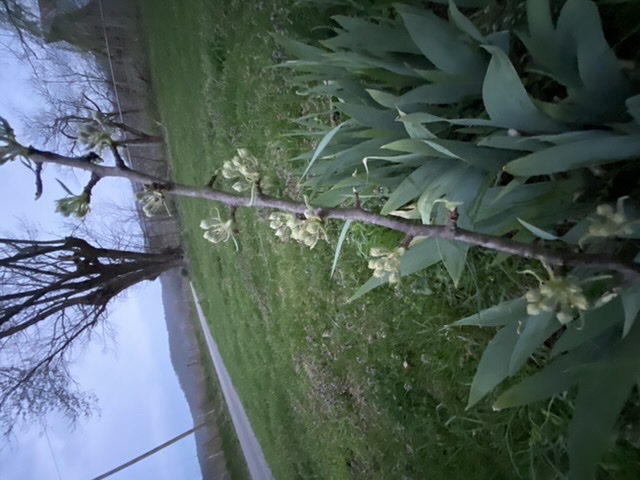 @Derby42
We are very blessed! Thats a very high quality pear im told. They dont grow much for me so im excited to see this! Ive never fruited it successfully.

I have it on a larger tree as well, I believe it will hold fruit this year

Yes its going to produce fruit but i think you will need to stake it. Congratulations thats a big accomplishment.

Need advice on ripening Warren pear.
They seem to be ripening .
Some on the ground, some come off when tilted up. Some are hanging tight.
None are edible stage yet. Need some “ after ripening”
Is this best done at room temp. On the counter .?
Or in the fridg.?
Over the years , I have had very mixed results ripening pears.
Some years keeping them in cold storage into the winter , with good results.
Some years they turn to mush inside before they appear ripe.
Some years they never seem to ripen.
So … ?
Looking for advice here.
What works for you. Especially with Warren ?

@Hillbillyhort i’ve never had trouble ripening warren on the table but the fridge would be better for this pear. Its very high quality when at its best

For how long you would keep it in the fridge for proper ripening?

Two to four weeks in the fridge should be enough for Warren. I’ve never had more than a few off of my tree, so they haven’t lasted longer than that, though I’ve read they can store for two months. I’ll test that this year, as I finally have a largish crop, maybe a bushel.

This is very exciting, as it is the best pear I’ve ever eaten, much better than Comice from my orchard, which also has a large and attractive crop here for the first time. It’s been an excellent year for pears here.

This story below tells the story of warren which is frequently compared to its parents seckle x comice. Once you taste it you will know why! Most years its very delicious.
It is worth noting i also grow magness which is identical in flavor but similar in appearance, so much so i cant tell the fruit apart. Disease resistance and production can be different between the magness and warren seedlings by site . Magness produces earlier at my location. If you want to compare them check out other threads we posted on both using the search.
Here is the article on warren
Market Watch: The magnificent Warren pear - Los Angeles Times

"With the partial exception of Bartletts, great locally grown pears are scarce at farmers markets in Southern California, where warm winters and disease render cultivation problematic. This makes it all the more special that Al Courchesne of Frog Hollow Farm, a rock star organic fruit grower from Brentwood, Calif., an hour east of San Francisco, will make a cameo appearance the next two Wednesdays at the Santa Monica farmers market to sell his legendary Warren pears.

Arguably the most delicious pear variety in the world, praised by the likes of Alice Waters, Martha Stewart Living and Oprah Winfrey, the Warren combines the best features of its ancestors, with the intensely sweet, rich, spicy flavor of Seckel, and the larger size and voluptuous juiciness of Comice. And the mystery of its origins, heretofore never fully unraveled, is almost as delicious as its flavor.

The trail that leads to the Warren starts with fire blight, a bacterial disease that makes growing most pears virtually impossible in areas where warm spring rains are common; a winter chill is also required, which is why very few European pears are cultivated in the southern half of California.

Historically, one of the few pears of quality that was resistant to blight was the Seckel, tiny but superbly flavored, and discovered near Philadelphia around 1760. Were it not for its diminutive size, it would doubtless be the preeminent pear on the market today.

Starting before 1900, pear breeders sought to hybridize the disease resistance of the Seckel into larger-fruited varieties. In 1920, Merton B. Waite, a U.S. Department of Agriculture breeder in Maryland, came up with a seedling of the Seckel called the Giant Seckel that bore much larger fruit, and was still blight-resistant. But it was not quite as flavorful, and it never became widely grown.

Breeders working for the USDA in the mid-20th century crossed the Giant Seckel and the Comice and in 1960 released Magness, which was blight-resistant and unequaled in flavor. It was fairly widely planted at first, but it soon proved to be an erratic producer and mostly disappeared from cultivation in subsequent decades.

A curiously similar variety named the Warren was discovered by a highly respected amateur fruit grower, Thomas O. Warren, in a most unlikely locale, Hattiesburg, Miss., about 1976. In the first published description of his namesake pear, a short article that appeared in Pomona magazine in 1986, Warren wrote that he found the original tree “growing in the backyard of a friend.” Its ancestry at first was unknown.

He shared bud wood with fellow enthusiasts in the North American Fruit Explorers organization. Another story, meanwhile, circulated that he had “found it planted in front of a post office and USDA soil conservation service office.” However, according to Ram Fishman, a nurseryman and fruit connoisseur who wrote an excellent online essay about Magness and Warren pears, when questioned further about the variety, Warren allowed that he discovered it among “the remains of a test site used by Mississippi State University.” Aha!

Some seedlings from the cross from which the Magness was selected were sent to a branch station in Meridian, Miss., that has long since closed, according to Kearneysville, W. Va.-based Richard Bell, the current pear breeder for the USDA. It is likely that this station sent some of the seedlings, or grafted trees, to Mississippi State for testing, and that the experimental orchard had been abandoned by the 1970s. The hot, humid conditions in the Deep South are murder on pear trees, most of which would have succumbed to fire blight, especially if unsprayed. A resistant tree would have been extremely conspicuous; if a pear tree could survive untended in Mississippi, it could make it anywhere.

Fortunate that Warren “discovered” that pear.

Thanks Clark for interesting history behind Warren. I’m an old NAFEX-er and remember reading articles by T.O. Warren in Pomona, a fabulous quarterly in the old days.

I have my first three Warren pears this year on a branch I grafted on Potomac a few years ago. Today I lifted one that had colored up nicely and it came off in my hand. I ate it right off the tree, pretty good.

@hambone im a former nafex member as well as are many of the long term members. We learned a lot from nafex at the time. Potomac that you mention you are growing is another very high quality pear similar to anjou. Sounds like you still know your pears!

Reminded me of a Baptist preacher…

Except . Instead of preaching of religion.

It was the Warren pear.

Preaching of its great fruit quality, and NO significant blight in the Deep South .

He was so excited about it , and was on a mission to spread the word.!

He converted me right there!

No significant blight, good quality if properly picked and ripened .

This is where I have difficulty, …picking at the right time , and ripening.

Not just with warren pear, but all pears,

I have had mixed results from year to year with pears ,properly ripening them.

Yesterday, after a wind. Many warrens on the ground .I picked the rest. They came off with the tilt ,Several bushels.

Filled the refrigerator. And a bushel at room temp.

None really at the ripe eating stage.

Will update as they ripen , or not.

They can live and produce , decades longer than most fruit.