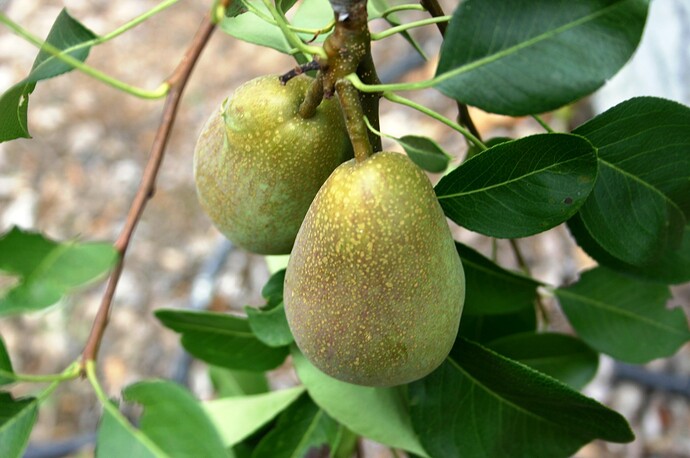 2048×1360 337 KB
I had never heard of Warren Pear until it was requested by a client in Zambia. It took some doing to find scionwood for it, and I was skeptical as I had pulled out a couple other European pear trees for being unproductive in a low-chill climate. They were also fire blight magnets, even on our hot and dry conditions.

It hails from Mississippi of all places, and is thought to be a cross of Seckel pear with the same spicy-sweet rich flavor. It is labeled as fire blight resistant, and is certainly one of the most productive European pears I’ve grown here; the topworked tree is just fruiting this year, so no taste testing yet. The twigs look a bit bug chewed-on, while the adjacent nectarine, plum, apple, and pluot trees are untouched.

The 100 benchgrafts of it I shipped to Zambia this spring were killed in shipment, so no African results yet on it. We’ll see how the fruit quality is this fall.

It’s supposed to be a very good dessert pear. I put in one this year, so of course I haven’t gotten the chance to try it myself. The only drawback I’ve noticed so far is that it is not very vigorous - it’s next to Moonglow on the same rootstock and about half the size. Of course, if you’re looking to keep a tree small, that’s not such a drawback!

Thanks for the interim report, Kevin. I considered putting in a Warren - I may still based on its reputation. The challenge with the Warren is its persnickety tendency to not bear. I think its FB resistance is due to being pollen sterile, so not really being visited by bees to be inoculated with the FB bacterium. Just a guess, but certainly a strong hypothesis, I think. DWN I think propagates this tree, but not sure if I would find it in my area, since I think its CH are a little high (600 per DWN), but apparently this has not affected your Warren at all. Great test, since we had so few CH this winter, and glad to see you’ve got some nice fruit. I may still put one in, near all my other pear trees. It is supposed to be self-fruitful, but couldn’t hurt to have some cross pollinating options. That is, if I can get the bees to spend any time in the flowers. Very sorry to hear all your lovely benchgrafts didn’t make it. That was an awful lot of work to lose, gosh darn.

Warren is probably the highest quality pear you will grow. Many think it is slightly higher on the quality scale than Magness (both of which I think are slightly better than Comice) and at least here, more fireblight resistant.

Warren is also known to be partially self-fruitful.
Magness is a bit more of pain in rear to pollinate.

They only other pear I can think of that may exceed Warren in quality is Aurora, which rather a fireblight magnet.

As far as vigor, here it is more vigorous than my Harrow selections.

Warren is not pollen sterile. It’s cousin Magness is and is a very vigorous grower for me, and an outstanding pear. I have a stand alone Magness on dwarfing root stock, which keeps ii small compared to other pears. But I also have it grafted onto Ayers and it grows like a weed. Both varieties are extremely similar. The basic difference is Magness is pollen sterile, while Warren is not.

Ray & Bunny, what, then, would you attribute the poor bearing with Warren that gets reported out there? Do you think it’s due to not having a good cross pollinator (even though it’s supposed to be self-fertile), or maybe due to wrong climate? I have Aurora, has not borne, yet, but is only 3 years old. And what would be the best cross pollinator for Magness?

Although I don’t grow Warren, I’ve never heard it to be stingy. I have Magness surrounded by Ayers, Moonglow, Maxine, Pineapple, and Plumblee, and they all bloom at the same time. I bought Magness from David Vernon @ Century Farm Orchards, from whom I’ve bought many trees, and whose opinion I respect. Although he sells both pears, he told me that, while they were very similar, Magness was the better pear, but that I needed to have plenty of pollinators for it. That’s why I chose Magness over Warren, and I haven’t regretted it. I don’t grow Aurora, but I can send scion wood of any of the varieties I mentioned.

There is a rumor that Warren actually IS Magness, rediscovered from an abandoned experimental orchard. Doesn’t explain the apparent difference in vigor. Someone who grows (and fruits) both could tell us how similar they really are(n’t).

I would choose two pears to pollinate Magness, so that they could pollinate each other as well.

That’s why it’s a rumor and not fact.

A couple of things. Let me address the rumor. It is 100% false. I knew/know some of the parties involved in the rumors that circulated over the years. . Richard Bell told me that DNA testing on Magness and Warren confirmed they are not the same pear. I asked him about it just last year. Warren was simply found on an old test station for siblings as I recall, that eventually became a post office (my memory could be faulty on that detail though as the important part was they are not the same pear).

Both Warren and Magness are very tardy in terms of bearing age. There is a very simple explanation why you may have light fruit set, pear pollen in general is very unattractive to bees, and Warren and Magness e is weak even for a pear. If you have something else blooming when you pears are flowering the bees are likely to be elsewhere.

I observed for years the bees would buzz around my Harrrow selections ad simply fly around the Warren and Magness. In order to get around this problem I grafted
a branch of Warren onto the Harvest Queen and let it grow over to th Harrow Sweet.

Now I get a great fruit set as the bees are happily pollinating away on the Harrow pears and land on the Warren before they know what is happening : )

I also learned that in general if I want my pears pollinated I need to cover my gooseberreis and currants on some days because their bloom time overlap with the pears. and the bees prefer them to pears.

Potomac and Gorham pears should be good pollinators for Magness. Potomac is reported as fireblight resistant. Gorham only moderately resistant. Gorham is a delicious pear, very much like Bartlett, from which it is descended.

I’ve heard some reports of Warren tasting similar to Magness. I’ve not yet had the opportunity to taste Warren yet. But here in central Md, Magness cannot be beat from mid-Oct thru mid-Nov. So far, it is hands-down the best pear I have ever eaten.

I have heard that Warren is the best-tasting pear that can be grown in the Deep South.

I’ve heard some reports of Warren tasting similar to Magness.

Grow side by side, they are indistinguishable. And if you eat them, if you labeled them each time and thought hard enough you might convince yourself you could tell the two apart taste wise, but I suspect you would never bet on it.

I know Ed Fackler grew them side by side and told me repeatedly he could not tell them apart. On the other hand I can tell them apart relatively easily, Fireblight attacks Magness in my area but not Warren.

Speaking of Potomac. Matt were you able to source wood from it this year?

No. I do not yet have Potomac. My source was sold out of Potomac, so I purchased a Worden pear instead.

Ok bud…I’ll have some wood for you this winter. Mine is really growing out nicely this year and it also fruited for the first time. It’s got some crossing wood that I’ve decided to let go until February so I’ll be able to get you a few nice pieces. Lately it seems, the word is that it’s a good pear. It sure grows nice and well behaved.

Warren is grown by a number of people in my area, and I do enjoy the taste. Not sure I would put it on a Comice or Seckel level, but still really really good.

Well, we harvested a couple Warren pears and let them ripen in the refrigerator. They were absolutely fantastic. The quality was as good or better than any pear I’ve ever tasted, and the tree was more productive in our warm climate than any I’ve seen. Not sure where this variety has been all my life, but it’s definitely on my radar now. 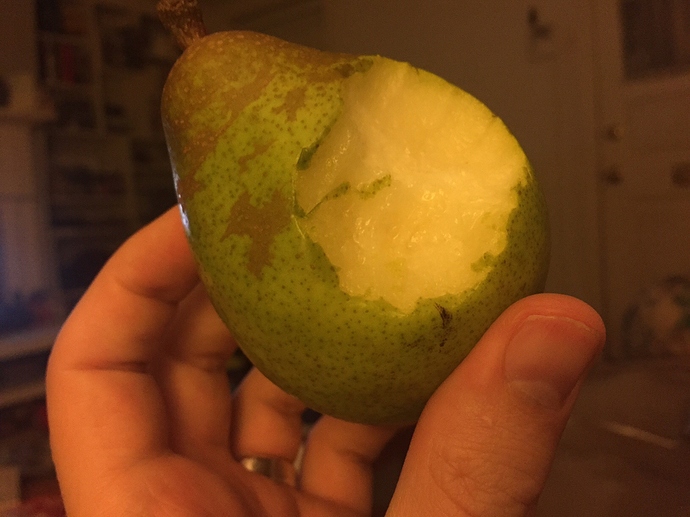 From a local orchard-- these pears are incredible. They never disappoint. 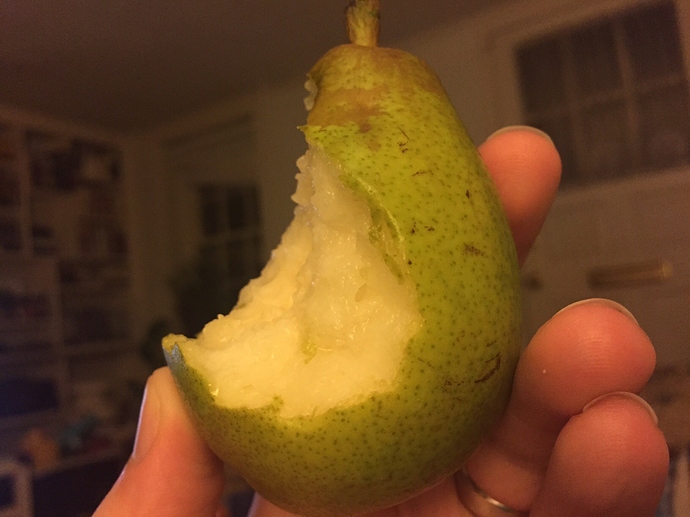