I just noticed this article from USA Today.It’s probably a good practice,but never have done it myself.bb

Eat avocados without washing them? That’s an avoca-don’t, FDA says

If you don’t wash your avocado before you cut into it, you could be toast.

The U.S. Food and Drug Administration is shocking guac lovers by recommending the public to thoroughly wash the peel, even though no one’s going to eat it.

It’s a way to prevent bacteria and dirt from hitching a ride on your knife from the dark green avocado skin to the light green fleshy part that you eat. To reduce the risk even more, scrub the peel with a produce brush and dry it with a clean or paper towel.

This month, the FDA announced that federal investigators’ sampling found Listeria monocytogenes on the peels of about one in every five avocados. The new data is part of a 2014-2016 study, in which investigators tested 361 domestic and imported avocado skins; 64 , or 17.73 percent, tested positive.

The research also tested for listeria and salmonella inside 1,615 avocados, but less than 1 percent tested positive for either.

According to the FDA, the very way people eat avocados — scooping out the inside part out of the soon-to-tossed peel before eating it as well as consuming the avocado very soon after cutting it open — helps reduces the risk of getting a foodborne illness.

Listeriosis symptoms include high fever, severe headache, stiffness, nausea, abdominal pain and diarrhea and in pregnant women, the infection can cause miscarriages and stillbirths, the FDA said.

About 1,600 people get listeriosis each year and approximately 260 die, according to the Centers for Disease Control and Prevention. Pregnant women, newborns, adults ages 65 or older and people with weak immune systems are most likely to be affected.

William Hallman, a human ecology professor at Rutgers University, pointed out that likely very little listeria would even be transferred from the skin to the flesh of the avocado, but called the FDA suggestion “good advice.”

“Even though the risk is relatively small, you can reduce it to virtually nonexistent,” he said. “There are many more dangerous things you can do than not wash an avocado, but having said that, the rate at which the FDA found listeria on avocados was a fair amount.”

Angela Doporto Brown eats at least four avocados a week, but she doesn’t wash them before putting them on her salads, mashing them into guacamole or spreading them on saltines.

But when informed of the FDA suggestion, Brown, a former medical assistant, likened it to surgery, when the incision site on the skin is carefully washed.

“It makes sense,” she said, adding that she might change her behavior. “I can see myself just for good measure washing the avocados.”

We eat lots of avocados, and I’ve always just given them a little rinse or light scrub- never worried about it much. But given the possibilities (listeria is really nasty, and salmonella is not at all nice either) and how easy it is to be a little more thorough I guess I will be. 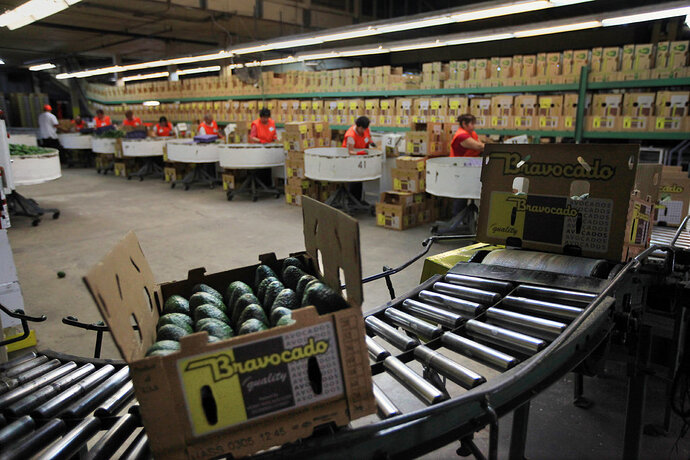 The recalled avocados were packed at a facility in California and distributed in that state, Arizona, Florida, New Hampshire, North Carolina and Wisconsin.

I read an article about that today.Some people were commenting,that the Listeria could be systemic and in the flesh,not just on the outside of the peel.Unsure if that’s factual.bb

Here’s a more useful article that discusses labels to watch for and provides an example picture.