I’ve got one in a blueberry bush I need to harvest soon, and another very aggressive group I just discovered tonight in a citrus tree. I’ve heard they’re good for eating things like caterpillars that damage your trees, but I don’t want to get stung either. Do you guys leave them in or try and get rid of them? And how do you get rid of them without using a poison spray which I’m sure would be a bad idea on fruit?
Here’s an older picture when the nest was smaller.: 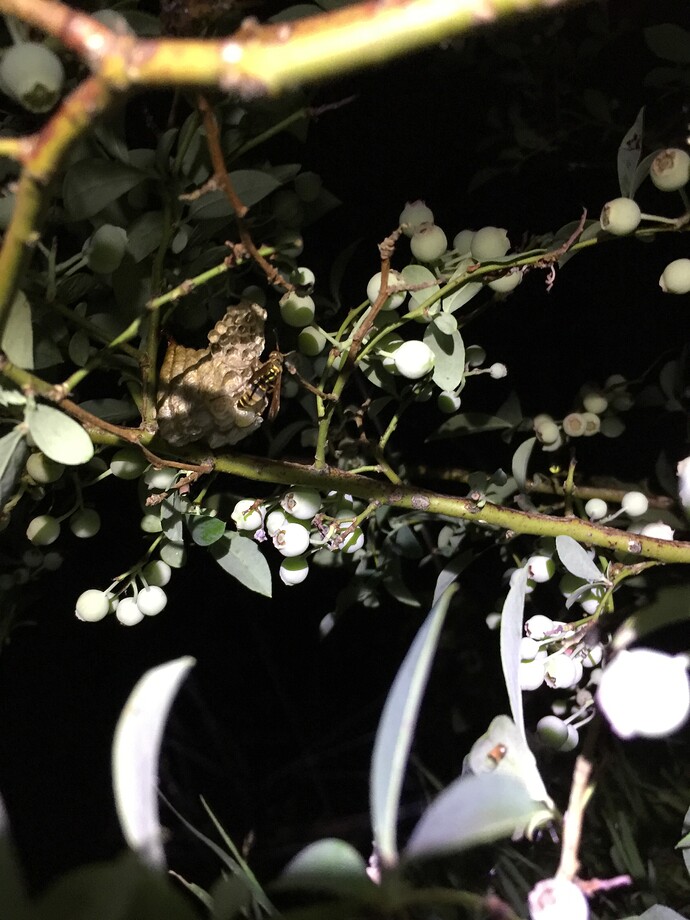 I’d test their aggressiveness before the fruit is ripe and weigh the risk. Paper wasps aren’t as bad as yellowjackets but can still be defensive of their nests. They will probably be most active during the hottest part of the day. I’ve never had one in a tree I was picking but have lived with a bunch of different species that made nests close by.

I’ve not used it for wasps, but there used to be a spray for ants and wasps that was just peppermint oil, its a nerve toxin to them… You can wash off the tree afterwards if you decide to spray them with that or one of the commercial pyrethrin sprays.

I don’t know how much it cools down at night where you are, but I’ve played with a couple of approaches. When it’s cool, before they get active, you can slip a bread bag over the whole works and bind it. Then cut it off and carry it away. Once I sprayed the nest with clear acrylic lacquer, and that held them back, but I wouldn’t want that on my berries! I wonder whether a good spray of mineral or olive oil would slow them down or just make them mad. Just ideas; I hope it helps.

Those are beautiful berries. I hope you can get your harvest without getting stung!

The guy on the radio around here recommends waiting till dusk, getting a wet/dry vac, placing the vac hose over the entrance to the nest, and sucking them all out. After you’re done, put something over the vac hose, then leave them to marinate in the hot sun for a day or two to make sure they’re dead.

Also, you want to make sure these insects are a problem. Have they actually stung anyone? There are many good pollinators that can look like problem insects. Perhaps this link may help explain better:

When an Abundance of Wasps is NOT a Problem | Gardens Alive!

If it was a yellow jacket or hornet nest, I’d be declaring war on those aggressive creatures, but I’ve found paper wasps to be pretty docile in general. I was once working on my hands and knees under some juniper rubbing my head against a branch for five minutes before I realized there was a paper wasp nest inches from my head. They were there and totally unphased. If you can leave them be, they are beneficial to your orchard

I would leave them alone and see how they react. I never seem to have much problems with wasps, yellow jackets, or red wasps. I have several huge nests in the shed where I keep my tractor and they have never been aggressive at all. Though for some reason they do seem to go after certain people. I have a big nest of yellow jackets about a foot above my hammock where I lay my head and they have never bothered me. I leave them there to keep other people out of the hammock.

wasps that was just peppermint oil, its a nerve toxin to them…

I’ll look for this. I also have a wasp nest, but it is 8-12" in both dimensions and hanging between an elderberry bush and a fence. I noticed when stuff started buzzing around me when I was still 10+ feet away from it. I’ve been avoiding it (and probably lost some Newberries to the birds), but want to eventually get in there for the elderberries in a few weeks.

Thanks guys. Yes Markmnt, if I do something it will definitely be at night. The nights are pretty warm right now, but they are a lot less active. I used a store bought spray last year on a nest on our house, it’s smelt like kerosene or something, went off like a fire extinguisher, and it really did the trick.
The guys in the blueberry bush or so mellow I didn’t notice them and till they are right by my head. The other nest in my kinkan tree are all jumpy and crazy, and one of them took a run at me. That tree doesn’t ripen in time for winter since I got it, so I don’t really need to harvest anything from there. But I do need to weed and tend to other trees around there, and I don’t like them taking a run at me.
Actually, may sound funny on a forum like this, but I don’t like bugs.
Over the hammock, no thanks !

If you can knock the nest off with a long stick I’m pretty sure the wasp will leave soon. Just knock it off and get away from area for a few hours. Stay cool at least while your knocking it down and then run.

If you can knock the nest off with a long stick I’m pretty sure the wasp will leave soon.

Where do they go? To wasp heaven or to build a new nest? If it is the latter, hopefully it’s in the neighbor’s yard and not just another one of my trees

I’m scared of stinging insects, so before I would do something like that (or pouring boiling water in a yellow jacket nest, like last year), I would get fully armored. That involves wearing a parka, full respirator, 2+ layers of tight to the legs pants, high boots that cover the socks, winter gloves, etc. And I’ll probably take off running anyways…

If you can get a hose there you can easily knock off the nest with a strong stream of water at a safe distance. I do it regularly here- even in mid-day, and treat yellow jackets as a pest, not an ally. On bad years they tend to swarm all types of fruit as they become ready for harvest. Any that nest in big apple trees can actually be dangerous if I don’t see them until I am up high, summer pruning in a tree. Making a swift exit down a tall tree while being stung is no fun.

When possible I use the hornet/wasp spray but I don’t use it around my fruit trees. The center of life for most bees/wasp is their nest and laying queen. When it is disrupted they don’t seem to have the ability to do much more than attempt to defend the nest area or where it was for a short time. When possible I think that Alan’s hose method would be a safer means of removal.

Where do they go?

I’m not certain but I think they hang around for a short period of time and then perish.

The hose idea is good, but my hose up there is super low pressure. I think I can manage the stick thing. So nock the nest on the ground and then just leave it there and that should be the end of it.

Just a word of caution. Don’t try the stick method with hornets.

I have a rock wall that yellowjackets like to nest behind. A couple approaches have worked for me. Ive noticed they always use the same entrance/exit so Ive had luck laying the suction end of a vac right at the entrance and they just get sucked in. If you do this when they are active and let it run for an hour or two you will get a ton of wasps like this. Another thing I have done which works better long term I think is take a paper towel and put it over the entrance with a fairly small hole in the middle, right where they go into the rocks. They will come towards it and land on the paper towel and walk around for a few seconds before going into the nest area. Spray the paper towel with concentrated encapsulated insect killer, about 1 inch around the opening, so they have to walk through it on their way in. They get this all over themselves and take it into the nest with them. They are tough enough that they dont die right away, but this will wipe out the whole nest over the next few days. I know its overkill but Ive had luck with pure CyzmicCS undiluted.
http://www.domyownpestcontrol.com/msds/Specimen-CyzmicCS-53883-261.pdf
Alternately, in a situation like this I think you could apply it directly around the opening to the wasps nest, if you have access to it when its cool out and they are less active using a syringe.

This is good advice. Hornets have a nasty attitude when irritated. Don’t ask me how I know

Just a word of caution. Don’t try the stick method with hornets.

Is that because it won’t kill them or because they could sting you if you get that close? Would the hose work? I’m not sure if what I have is hornet or wasp, but it is pretty big.

@BobVance
Hornets in my opinion are one of the most easily aggravated insects I know of and they come well equipped to take you off your game when they attack. They sometimes will attack you when you walk by their nest. I have been stung by them when I walked by 10-15’ from the nest. Once they are ticked off they come out of the nest in masses. They are big and fly faster than you can think about running. My method with hornets is to get a full can of hornet/wasp spray and then drive your truck within the spray range. Then roll your window down just enough to blast the entrance. Keep the spray pointed at the entrance and you will be amazed at how many roll out of the nest. Empty the can, then roll your window up and drive a long way from the nest. I did this two times successfully.

I’ve used the stick method several times as well. Now I keep a wasp spray can in my truck for when they show up in a tree far from a hose, but long sticks can work- just a bit dicey. Yellow jackets, in my experience, never attack in true swarms, so the worst case scenario is likely a couple of stings. Suck it up.