We planted our orchard!

Took a lot of work, what with the fence and all. But we finally got our orchard started this fall. We have 5 peaches left to plant but they’ll be in a different location on the NE slope. 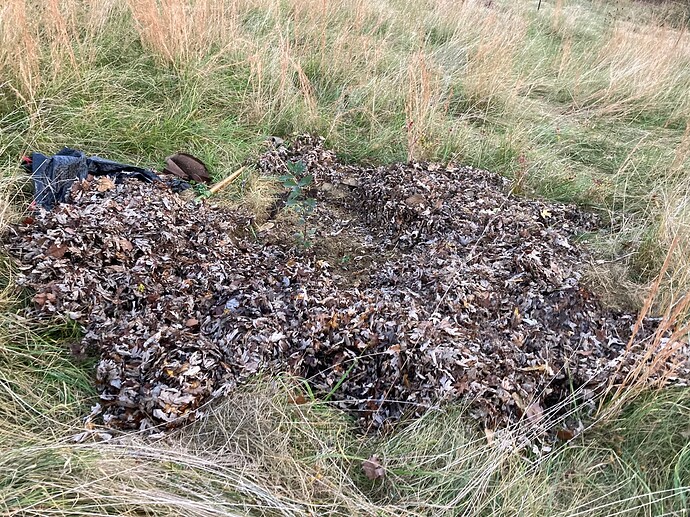 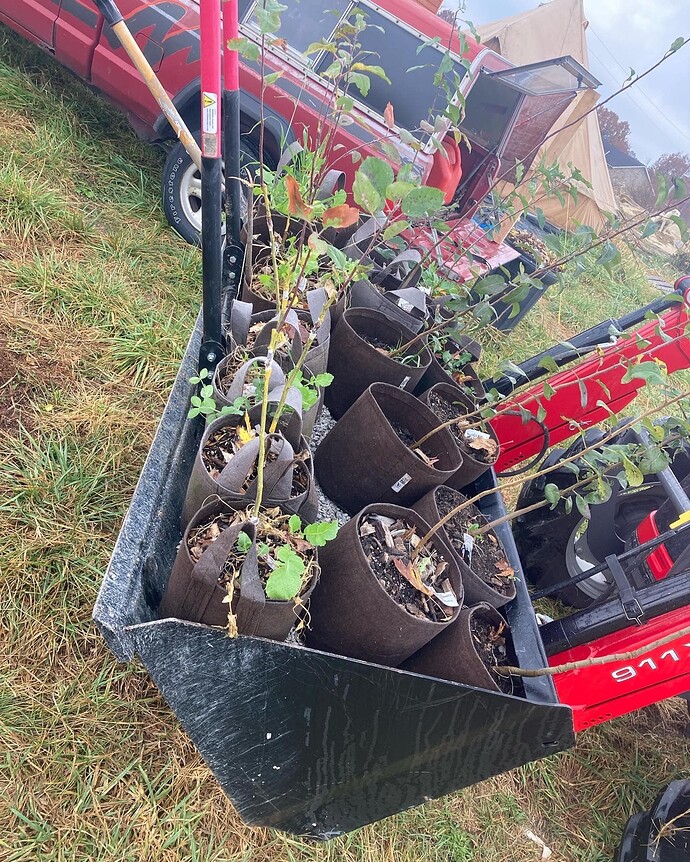 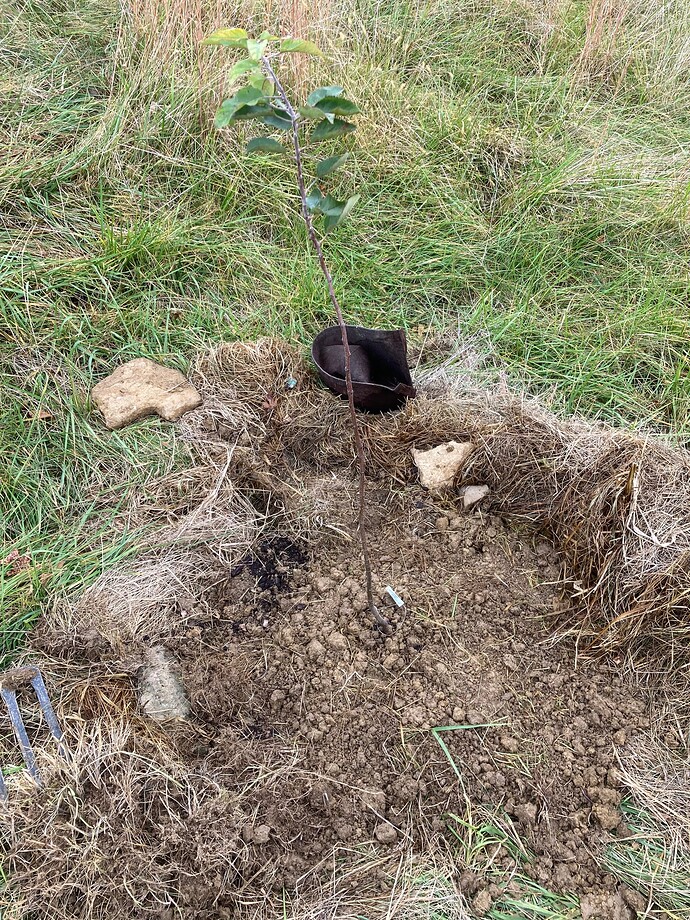 We’re still mulching too. Can never have enough right?

This is meant to be a seedling orchard, but we’ll have two rows of M111 and 20 seedlings. Mostly apple, the rest pears. Pears are on the outer rows near the fence due to growth habit, apples in the middle on a 25x25 grid. And I took one out of Michael Phillips’ book and we’re planting interstem trees in between the seedlings. 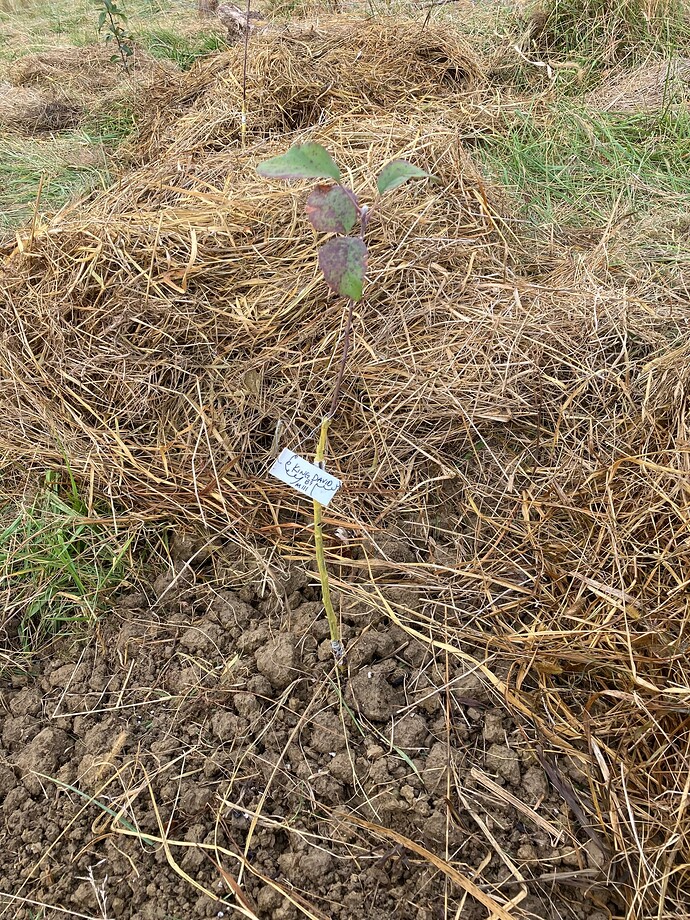 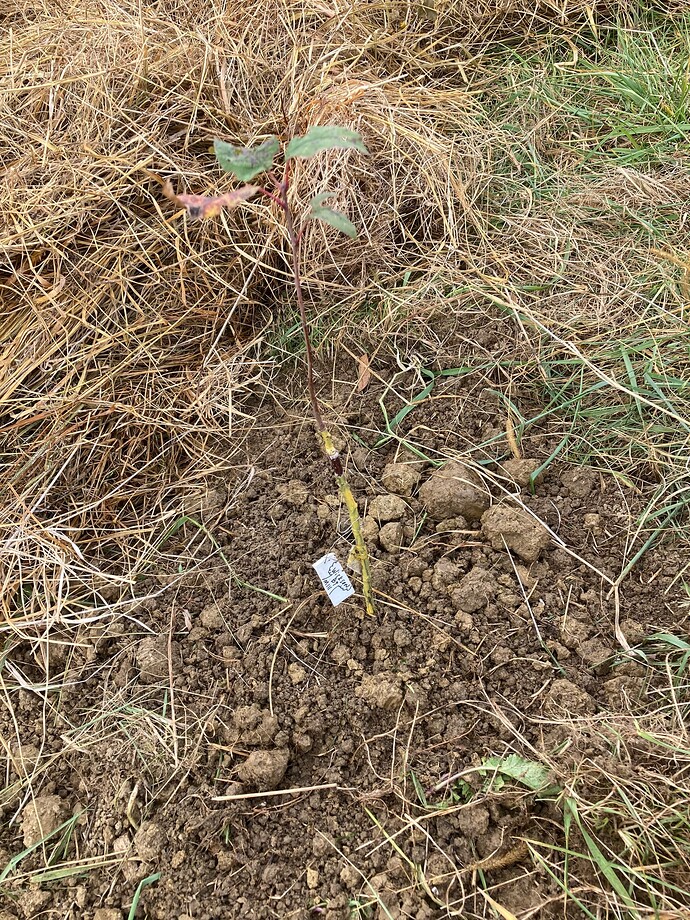 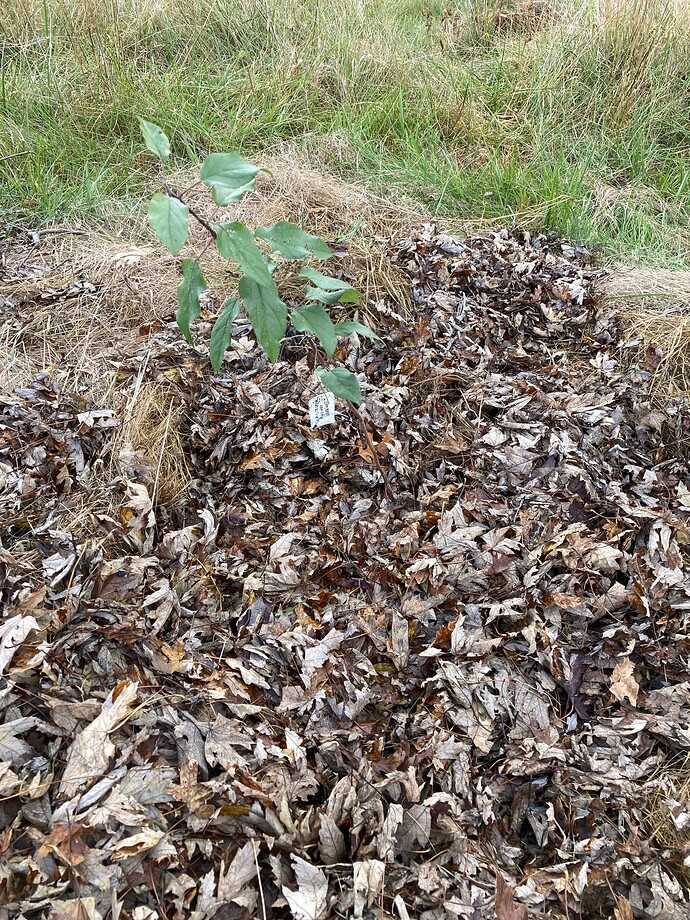 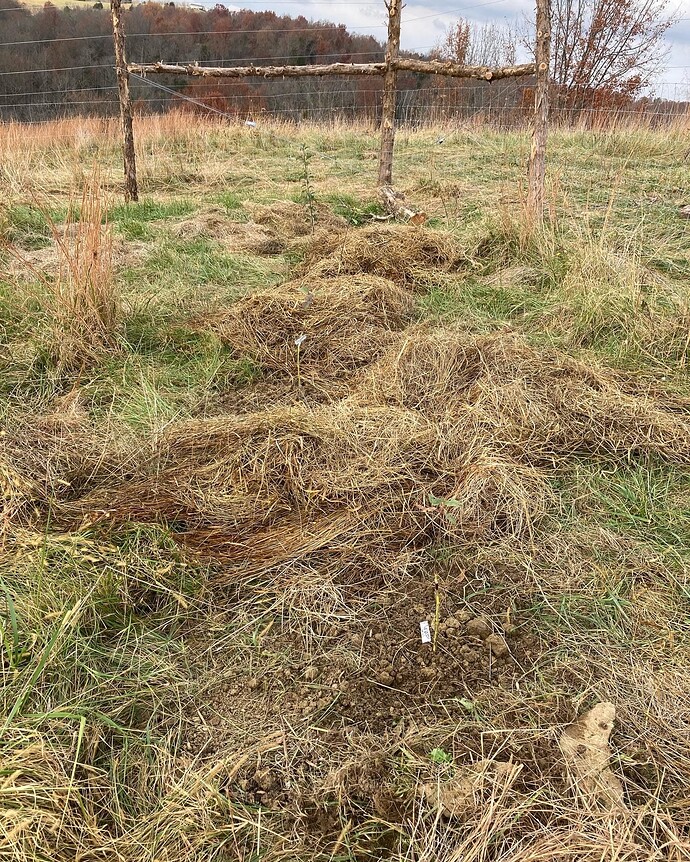 I sure hope these trees like rocks. These stones were all pulled out of the one planting hole in the picture 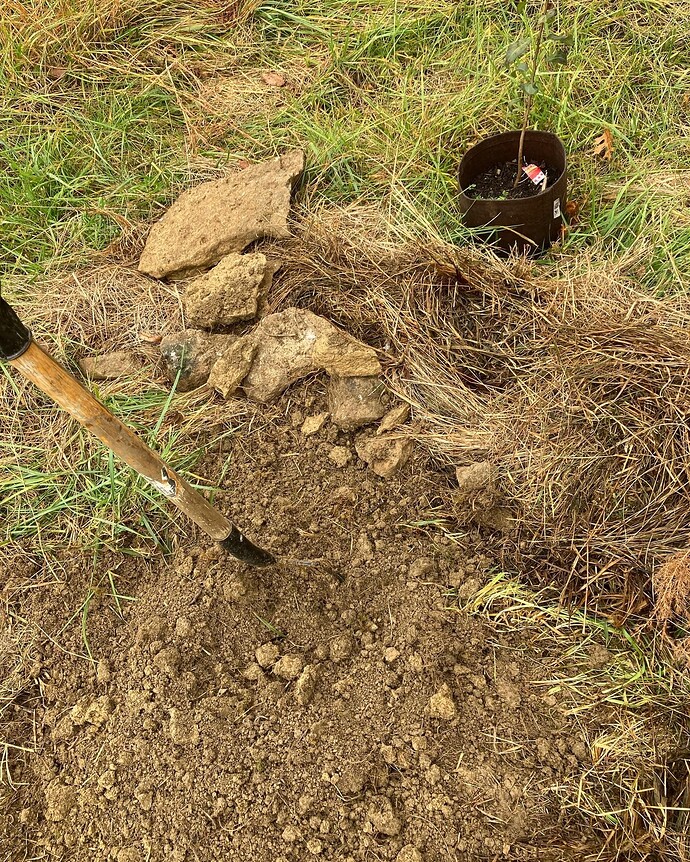 One last set of pictures just of the fence, idea also taken from the previously mentioned book. I hope it’s high enough and the gaps aren’t too big. The high tensile wires are spaced 1’ apart up to 8’. First gap is 6”, then on to 1’. 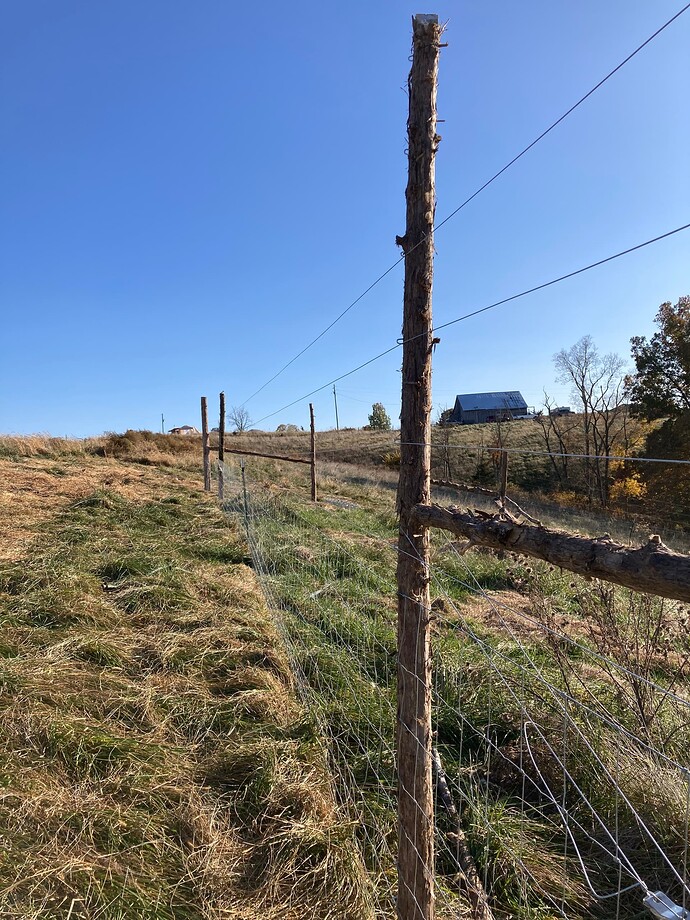 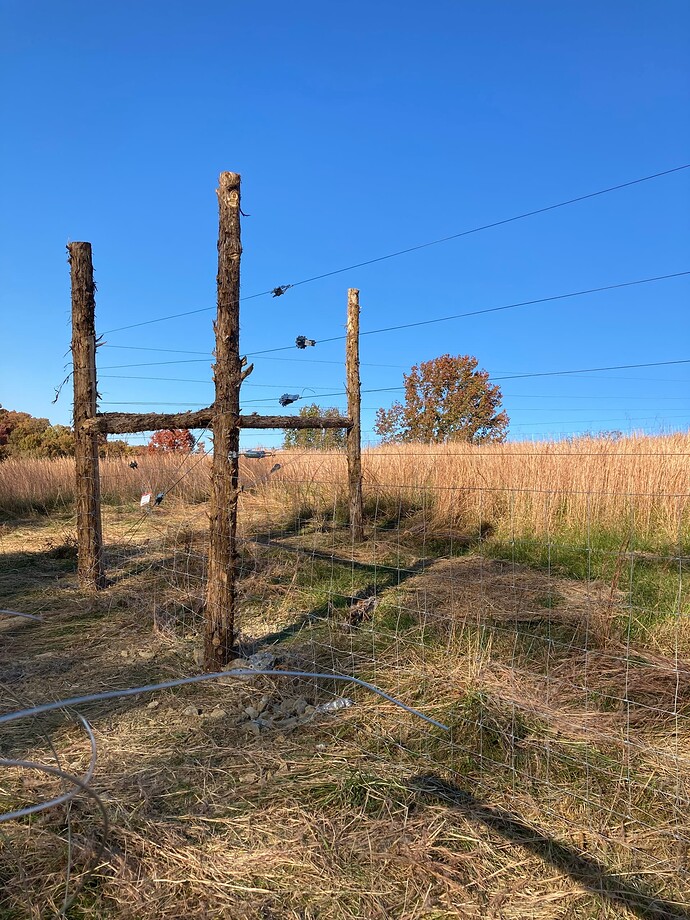 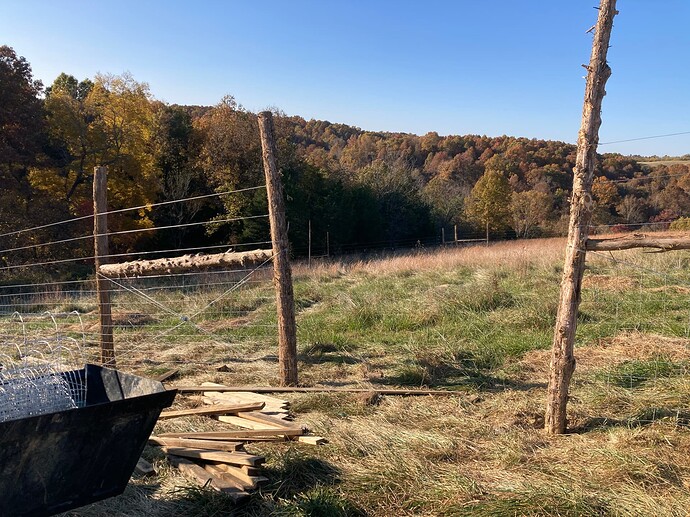 More seeds are ready for stratification, as well as several more M111 rootstock ready for grafting. I have two Arkansas black T-buds, one t-bud on m111 that I believe to be gold rush (while driving through Lenexa Kansas my wife and I took a walk in a park and there were two apple trees there. One I’m pretty sure was Gala, the other was loaded with spotless little green apples about two inches in diameter. I found a scion and brought it home and grafted it), and a fourth M111 T-bud Of black strawberry from @SkillCult. Thanks for all the scion wood and seeds Steven.

Hope y’all enjoy the photos. I’m pretty happy we got all this done this fall. A total of 23 trees planted. 5 interstem (golden russet, wickson, January russet, king David, and a pink parfait seedling) , 5 m111 (wickson, 3 cherry crush, and january russet), the rest are seedlings for rootstock or to see what plays out.

Tell us something about the land. Where is it located? Looks like nice hilly views. Does the tent in the photo mean you ‘rough it’ while you plant the orchard? Sounds like you are planting a couple crabapples (Wickson). Do you use then to encourage cross-fertilization? I envy you. Sounds difficult, but rewarding.

Wonderful! Did you till the dirt?

I put down a layer of mulch this year (6"+) over what will become our orchard and am holding my seedlings in our greenhouse over the winter before planting them out in springtime. I am a bit concerned that I didn’t till to establish the seedlings since we have heavy clay soil. I imagine myself raking back the mulch to dig out the dead grass layer this spring …

Ours is a heavier clay silt as well, tons of stone. I didn’t till either. All we did was scythe downy about a 10sqft area of thick grass where the tree would be and pile it in the middle. It killed the sod and made it workable. Broadfork and spade fork did the rest of the hole prep. A 3-4 foot wide hole was dug up, down to the depth of the fork times. Seedlings will push through it I think and establish themselves. Ideally I would’ve liked to to till the rows and cover crop it for a year, but we don’t have a tiller i and I don’t really wanna buy one. Or rent one. I wanted to leave the rest of the soil as undisturbed as possible. I began to over think it at first but figured the trees will know how to do what I can’t seem figure out so I kept it simple.
The plan is to use heavy mulch rings (hay and leaves) each year to kill the sod further and further away from the tree. It’ll fertilize and make the topsoil softer for the feeder roots. The clay and stone will help anchor them even if the roots aren’t too deep.

Not roughing it. The tent is really there for getting out of the elements if needed. We plan on building a farmstead so a house is being built now, followed by a second one.

We’re in northern Kentucky, edge of the bluegrass and the knobs region. It’s a heavier clay silt soil with an absurd amount of rocks called Eden soil. Used to be pasture on a 100+ acre farm that was subdivided into 10-20 acre lots. Ours is 19 acres. The topsoil seems pretty nice, but the subsoil is fairly dense. Probably was overgrazed, farmers don’t rotate cattle thy much round here. The grass is lush but sparse because it hasn’t been mowed in a couple years. This land is said to not grow much other than cows and hay, and of course deciduous hardwoods (apple trees). The surrounding area is dominated by hickory, oak, and the dreaded cedars (Arkansas black, wolf river, Akane, gold rush, and Williams pride are my core choices). But cedars are good to have around when I wanna build homes and fences.

The wickson is planned to be cultivar for cider actually. If it’s a good pollinator too then hey, we god good seedling stock too from it. This is a ton of work, but for now our focus shifts to the home building. Rent ain’t cheap. We’ve bought the land with savings between 4 people, as well as the home. Hopefully in a few years we are sitting on a retirement plan with no debt. The expense is all sweat equity.

my heavy clay rocky soil grows good trees as long as they have good drainage. I’m at the bottom of a hill so most of my plants/trees were planted in mounds or raised beds. once they get started the roots will find their way through the rocks. as long as you aren’t planted on solid ledge or granite your trees should do fine. your clay doesn’t look as dense as mine and your lands on a incline. they should grow well there. before you mulch next spring sprinkle some gypsum on the soil. it helps break up the clay and adds some calcium. a good layer of compost would help also.