What am I suppose to do with all these upright branches?

Here are a couple of pictures of my peach trees. It seems all the growth are done by those straight up branches, they just keep growing and growing. If I were to remove all these straight-up branches, would there be anything left?
What do I do now? 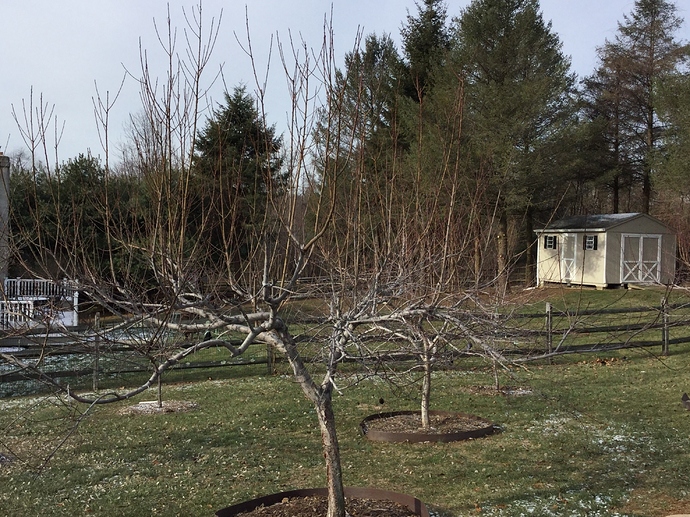 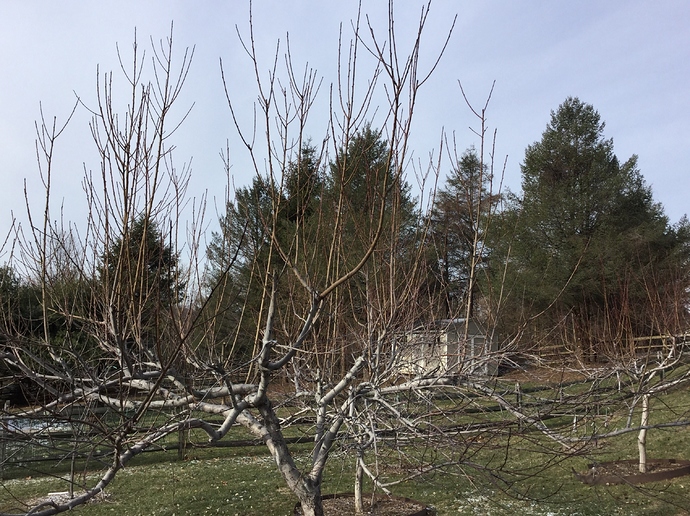 I don’t know the answer to your question so I too am interesting in seeing what the experts say.

What type of peach and are they good? Looks like a heck of a lot of scion wood you could trade or give away. Lol

If you prune the hell out of them,they would regrow the same way next summer so if you do than come early summer you have to shorten them again.The very aggressive ones i would cut them completely off at the base,don’t leave a little stump.

The basic form of your tree looks pretty good to me. I would head the upright growth growing along the perimeter and growing outward to the height that you can reach with a lopper. Upright growth growing toward the center should be removed. Most of the older spent wood and downward growing branches should be removed to make way for new fruiting wood. Dr Mike Parker in the video below has pruned thousands of peach trees. I try to make my trees look like the mature tree on the research farm:

The one in the picture is a mystery peach:-) , it was sold as Georgia bell, but it is not. The taste is so so but it ripes in mid July, earlier than all my other peach trees.

I also have Elberta, Georgia bell and red heaven. I like red heaven the most.

Tha’s exactly what happened. I pruned off some, more will grow out from the stub. I will try not to leave stump in the future.

Thanks for the video. It’s very helpful. Some of my main branches are growing downward, what should I do with them? I have a lot of pruning ahead of me, When is the earliest time I can start pruning?

Perhaps Alan will comment since he has a lot of experience pruning trees of many ages. All of my experience is with trees of the same age (4 years) . I normally prune my peaches late after I see some booms. That way I can combine pruning with thinning depending on the number of flowers that survive the frost. Your speed will improve with experience. Think about how you want the tree to look next year at this time.

Sarah,
I PM you with a suggestion.

Sara, peach trees bear fruit mostly on the last year’s growth, that’s why you want to constantly prune for growing enough young spurs. The logic is as follows: say, there are two spurs close to each other emerging from the same branch. If you leave them both for the summer, they both will blossom and produce some fruits. However, next year they will not be producing fruit, fruiting will go to the spurs which emerged from them (and the tree will be gradually becoming taller). That’s why you shorten one of the spurs somewhat and cut another one, leaving 2-3 buds (in fact, 2 are ok but the 3-read one is for the peace of mind). In the summer, the spur you left will bear fruit, and the spur you trimmed will produce another 2 young spurs from the 2-3 buds you left, which will produce fruit in the summer. In spring, you cut your last year fruit bearing 2-yr old spur, and all you have are the 2 young ones left - again. And you repeat the cycle: shorten one somewhat, and trim another one leaving 2-3 buds. Then - repeat next year

That’s the general logic behind peach tree pruning. Having said that, you can modify this technique according to your goals and preferences. Also, another aspect of it is that you don’t generally want the canopy to be too crowded with branches and spurs and you don’t want too many fruits on the tree, because they’ll be smaller and the crowded canopy is more succeptible to fungal diseases. Other than that - have fun with your tree, its “sceleton” is fine, and it’s up to you to decide what constitutes “too crowded” or “two many peaches” for you and how tall a tree you want. The attached image sort of illustrates some of my points, but the image suggests leaving two fruiting spurs while I suggest one). The same logic pretty much applies to apricot trees pruning, by the way. 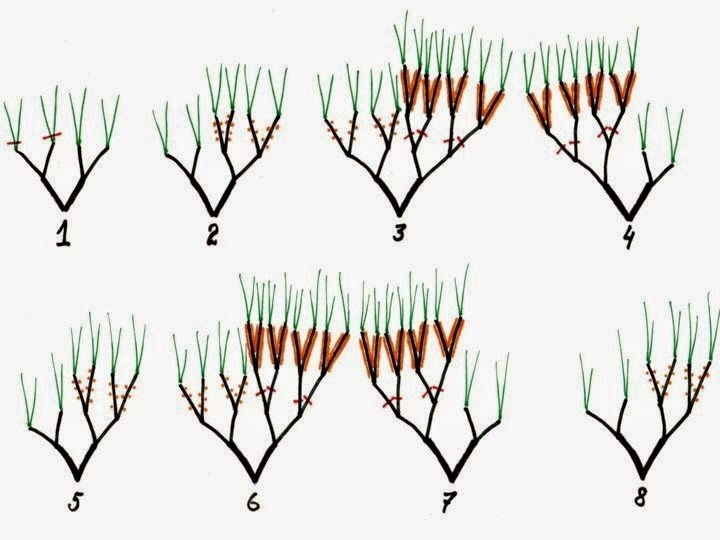 As for downward looking branches - if they are young last year spurs, they are likely to bear fruit this summer. You may remove those next spring completely or trim if there is a chance of getting new spurs facing up and/or out.

Kinddragon, thank you very much for your detailed explanation! It makes perfect sense. I will try your method this spring. Really appreciate it.