What Disease on my Lemon Tree? 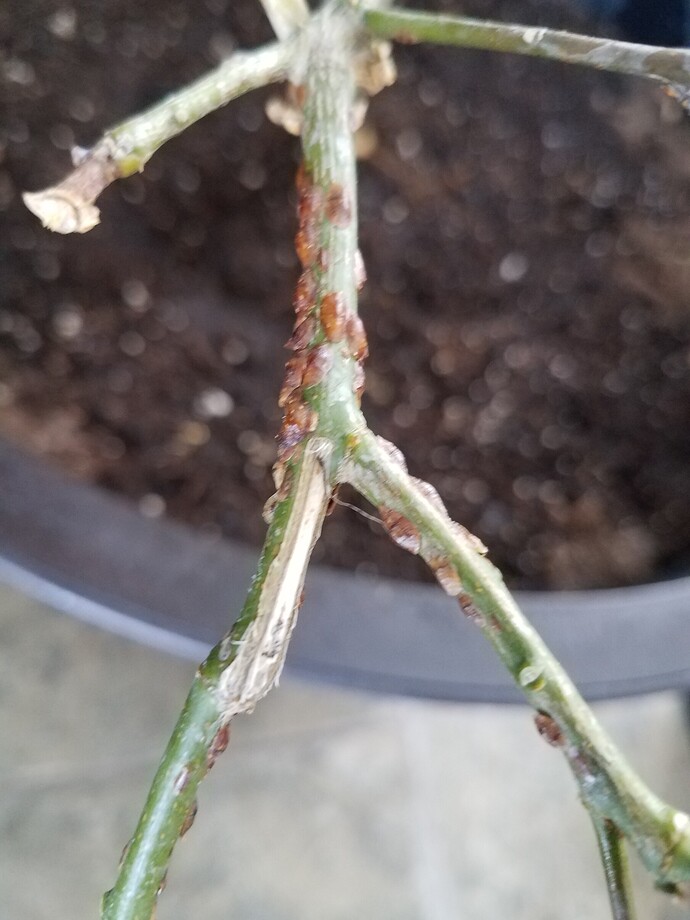 Agreed, scale. My citrus can get these bad if I keep them indoors for a long period of time.

Scale. Common pest of indoor citrus, along with spider mites.

So what do I use on them?

I take a towel and rub them all off. Neem oil works too, but if you just rub them off then apply neem you’ll probably have more success.

Rubbing alcohol will take them off, apply to a cotton swab or cotton ball, and rub gently, taking care not to injure the leaves, green stems or green petioles. Neem may assist with younger pests (mature scale insects are pretty impervious to any insecticide, organic or otherwise). but you have to be extremely vigilant. They are very hard to completely eradicate. I recommend watching your indoor plants, especially your citrus very closely, and get on this asap. Same with spider mites.

Yes it does at least at certain growth stages. I’ve used all season oil on citrus thinking that since they always have leaves a little lighter oil should be safer. It kills my scale. On a big tree coverage is the difficult part. It kills the ones that get covered but if any remain they eventually spread. I’ve also used several insecticides and mixed oil plus insecticide. The combo is more likely to kill everything.

Will they go away when the plant goes permanently outside? I cleaned them all off–as far as I can tell–and brushed it with Neem and sprayed with an insecticide, so we’ll see. I also cut off the die back. It looks much better even though there are no leaves on it.

I wouldn’t recommend planting citrus outside in your zone, Rob. They wouldn’t survive.

Yeah, I know that. I should not have used the term “permanently.” I was thinking in terms of being out for the rest of the year, and if that would take them out. In other words, is scale simply an indoor problem?

Oh, well, no. The scale probably was contracted from being outside, and proliferated indoors. So, you’ll have to watch and continue to treat while outside. You’ll have predators outside, though, that might help you keep scale and spider mites at bay. So, continue to monitor. And remember, stressed plants are more prone to pest attacks, so be sure your citrus trees have large enough pots, and have root growth room, are being fertilized very regularly (i.e., with every watering), and get plenty of sun or full spectrum light while indoors.