What I learned about storing apples this year

As I’ve mentioned previously, I’m a novice apple guy who bought a house in 2015 that already had two mature but long unkempt apple trees in the yard. The apples that year were small, diseased, misshapen, and bug-riddled. I ate four bites. Heeding the wisdom on this forum and elsewhere, this past year, I pruned in late winter, thinned and bagged fruit in spring, and sprayed 5-6 times with a mix of Spinosad and Captan. When the fruit ripened, I determined with 90-something percent accuracy that the trees are a Golden Delicious and a Jonathan.

We collected hundreds upon hundreds of apples this fall, picking from around Labor Day to early October. I focused on the Golden Delicious apples because that tree is 3-4 times the size of the other, because it had so many apples, and because the apples were unlike any I had ever tasted in my life (first time to eat a tree-ripened apple). I picked many of the Jonathan apples a little too late–overripe and rather mealy. We gave away several hundred apples to at least 11 families by my count. We also bought a new fridge, relegating the older one to the basement for apple storage.

Now to the topic at hand.
Lessons I learned:
(1) Apples picked overripe don’t unripen in storage. See middle apple in front row.
(2) Apples stuck in the crisper don’t last nearly as longed as apples stored in plastic bags. See front row of apples.
(3) Apples dropped unceremoniously in the plastic grocery bags that are open last longer than those in the crisper but don’t last nearly as long as those in a closed bag. See far left apple on back row.
(4) Apples that stayed in their sandwich bags in which they grew and then placed in another plastic grocery bag that is closed up pretty well last a long, long time. See right three apples on back row.
(5) Shriveled skin does not equal poor tasting fruit. See left and right apples in front row.
(6) Remember rules (1), (3), and (4) above 7-8 months from now.

I took the pic below today, so these apples have been in the fridge since sometime between early September and early-to-mid October, so 4-5 months. 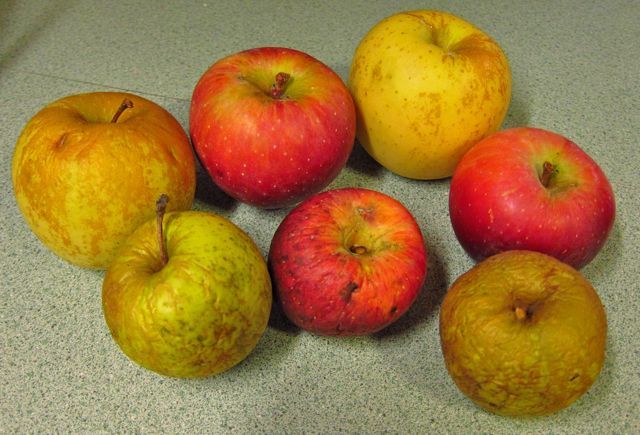 Well said, every word, and useful information too. Thanks.

Amazing how good Golden Delicious can be when they are tree ripened, ay?

those are both nice apples, I am a freshly picked GD fan myself, and also favor the Jonathan tartness. But both varieties store poorly, at least compared to many common Michigan varieties.

Amazing how good Golden Delicious can be when they are tree ripened, ay?

But both varieties store poorly, at least compared to many common Michigan varieties.

That’s what I have read elsewhere. I don’t have any basis for comparison, but nearly 5 months in my fridge hasn’t posed a problem for those apples that I properly stored in bags. I ate three of them yesterday. One of the Jonathans was perfectly ripe, as if it had just been picked.

Congrats on turning your apple trees into good producers.
And thanks for the useful info on storing.