What is this white stuff on my peach trees?

I started to notice this white stuff on my peach tree branches this summer (maybe fall), there are still some left on my trees. See the picture below. I googled it, some website said it’s woolly aphids. Is it true? What should I do ? 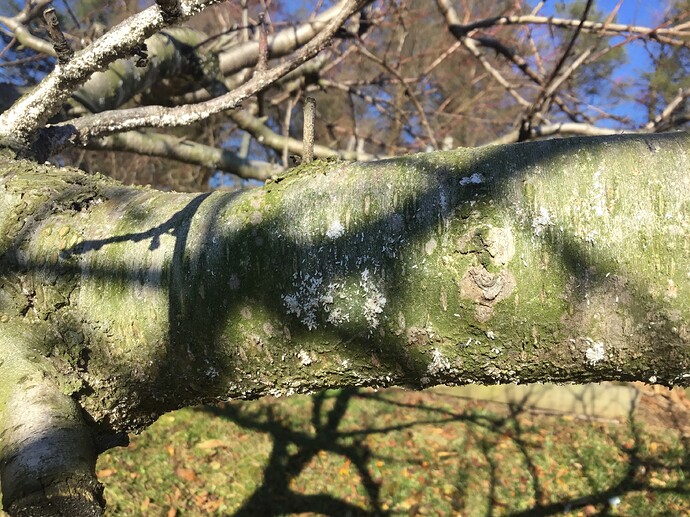 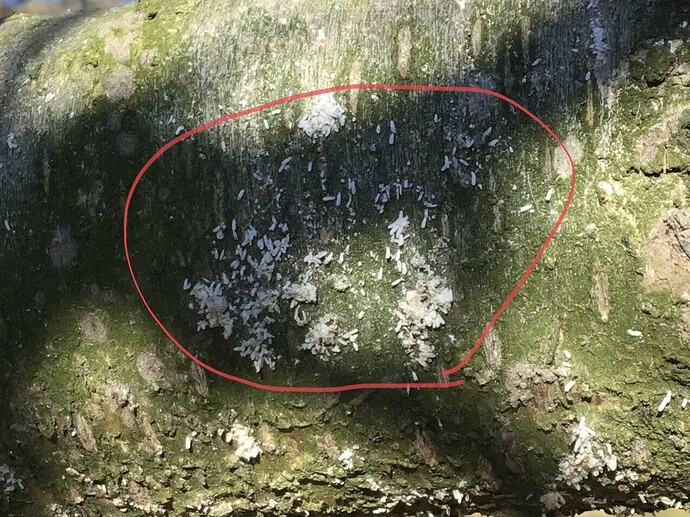 just add a blow up picture so it shows more detail.

Looks like peach scale to me, which has been running rampant in my region for about the last 4 years. Control it if I’m right and don’t let it kill your trees. Start with a 2% hort oil spray at first signs of growth. You can also knock them off with a power washer just before.

just add a blow up picture so it shows more detail. I don’t think it’s lichen, there are lichen in other places, it looks very different.

@alan I googled “peach scale”, it sure looks like what I had. I added a blow up picture to show details.
Yikes, it’s really gross! Now I am crawling in my skin. They just showed up all of sudden this summer, a lot of them!
The picture was taken today, so they are still there. Are they still alive? Should I do something now? It’s too cold to power wash the tree now.

Should I wait to spray the horticulture oil in the spring or spray now?

If scale insects, will emit liquid when crushed, unlike lichen.

Definitely lichen, use some lime sulphur spray, it will kill any moss or lichens and the winter wind and rain will then wash the tree clean. One of my older trees had a much thicker layer of this and even covered by moss. I became concerned that it would harbor spore that could damage my trees so I first used a soft copper wire brush to clean most of it off then sprayed with lime sulphur. I plan to spray it once a month until just before bud break in spring. Good treatment to prevent PLC and shot leaf on peach and plum trees
Dennis
Kent

I don’t believe treating them now will have much affect. It is the crawlers that are most vulnerable, so you best cut them off at that state of development in spring. I’d give your trees a 2% dose at first growth and 1% about a week later.

I use Centaur to control it in late spring, but it is only packaged for commercial use and costs over $200 for more than you could ever use in a lifetime.

Another forum member north of me has had similar issues with her peaches, so she recommends:
“ In the past I would spray Bordeaux solution every month from November to March. But this past year I alternated with Kocide and LimeSulfur.
The formula for Boredeaux solution (taken from UC IPM Online) is 1lb cup copper sulfate (Bonide Copper Fungicide - 7% copper sulfate) + 1lb hydrated lime in 10 gal water. I usually add NuFilm as a sticker.”

I could not locate Nufilm at a reasonable price, so rather I found my local Ace Hardware has Turbo sticker spreader, which seems to be a good choice.
So now I use her Bordeaux mixture and alter with lime sulphur every other winter month
Dennis
Kent, wa
Dennis

What in a your Bordeaux mixture targets scale? Especially during the winter months when almost nothing affects them in their armored state.

Like Alan, I believe this to be scale, “white peach scale”
The white rice grain looking ones being the males.
Females looking like a fried egg., stuck on the branch.
While it is often recommended to spray a oil in the “ crawler stage”
This is hard to get the timing right.
I have had good luck controlling other types of hard scale ,at anytime, using a white oil made from canola oil and soap,
It’s thick , will definitely suffocate ,kill even the adults.
Out breaks are often the result of killing their predators, from other insecticidal sprays. Save the predators if you can .

I’ve been fighting it on cherries for a couple years. This year it decided it liked schizandra and crandall currant.

I did beat it back from the cherries.

I’m not using much in the way of insecticides, so I’m not sure what could be stopping the predators from doing their thing.

So, it’s either lichen or peach scale.

I will go out to look at them under magnifying glass and take more pictures.

And try to squeeze them. If they are live scales, maybe some liquid will come out.

For those of you who think it’s lichen, I thought lichen looks more like this: 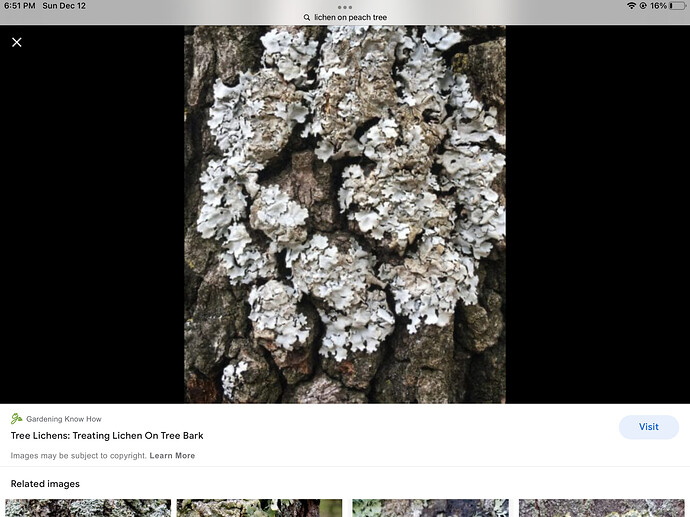 I may be the person referred to with the Bordeaux recipe - this is for PLC, not scale. (Also I see a mistake in my recipe- should read ‘1 lb’ copper sulfate, not ‘1 lb cup’.)
The pic indeed looks like scale, presently fully armored with an impermeable covering. Wear a glove and squish now. Hort oil in the spring.

I may be wrong about lichen vs scale, but if it’s scale the lime sulphur may be the best treatment that I would use. If you can’t find lime sulphur then a dormant oil may also work. The reason I would use lime sulphur is because it targets more than just scale but also scale. Just depends on what you can find!

Winter is the traditional time to prune and spray deciduous fruit trees and vines. Spraying is carried out at this time to eliminate pests and diseases which can overwinter and emerge in spring. Tw…

Why would you prefer it over hort oil? I can find no indication of it being used against peach scale in a quick search (different scales may respond in different ways to treatments), but hort oil is used even in commercial production for scales where conventional synthetics are used but is also approved for organic production.

Mainly because when I used Oil it showed no efficacy but when I use lime sulphur I can see the results are usually positive. Just read the citation I posted. If Hort oil works then use it, I have no good evidence to point to about Hort oil, from my experience so I quit using it, money down the drain for me!

I had peach scale for the first time this year, on 3 different trees. I used horticultural oil. It took spraying twice to completely kill it. Need to spray the entire tree.

Need to spray the entire tree.

And at the right time, when crawlers are active. But I won’t dismiss Dennis’s claim of success with Lime Sulfur just because I can’t find support of it from research based guidelines. It would be nice if someone else here tried it and corroborated his experience. It would be great to have a tool that is affective against fully armored scale that could be used when trees are in dormancy, but it would also be surprising.

In fruit growing, surprise is no rarity, including surprises that contradict the literature.