What kind of Hickory?

First here are a few more pics of the tree trunk, and bark up close and the top portion… 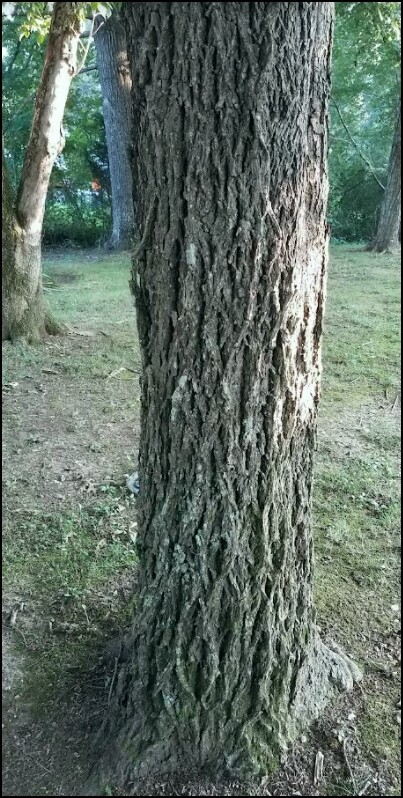 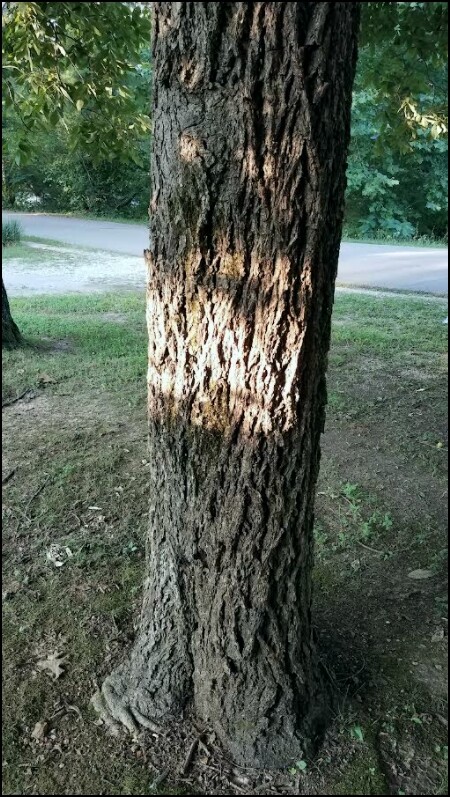 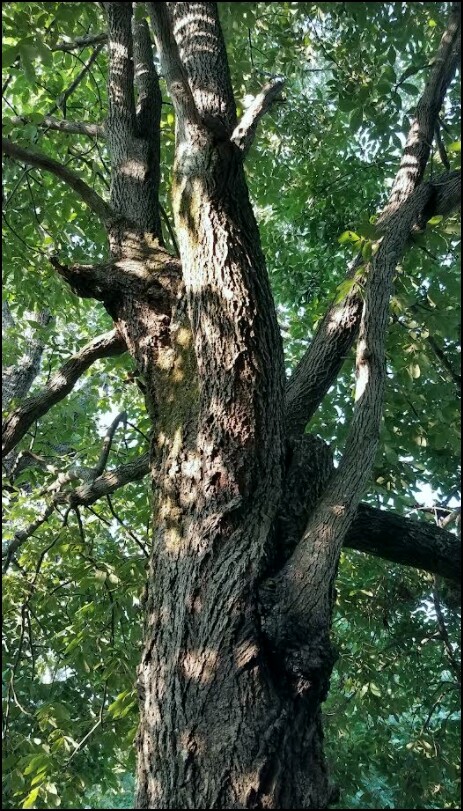 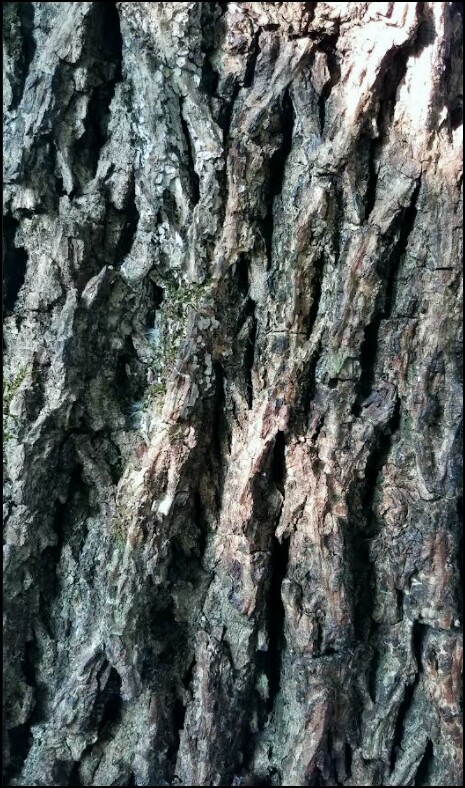 I think this is what you refer to as the terminal bud ? 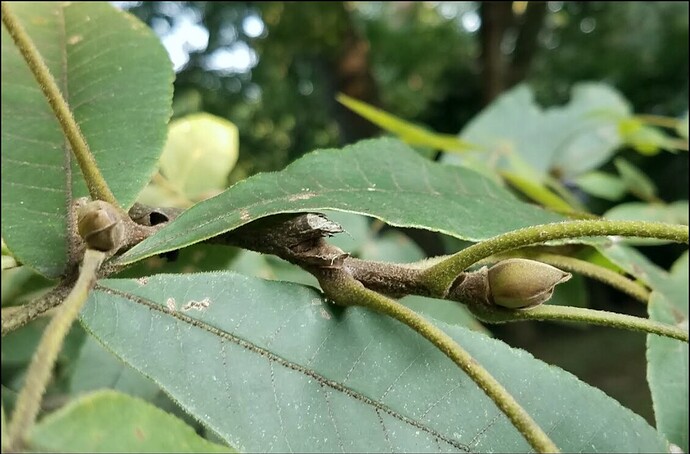 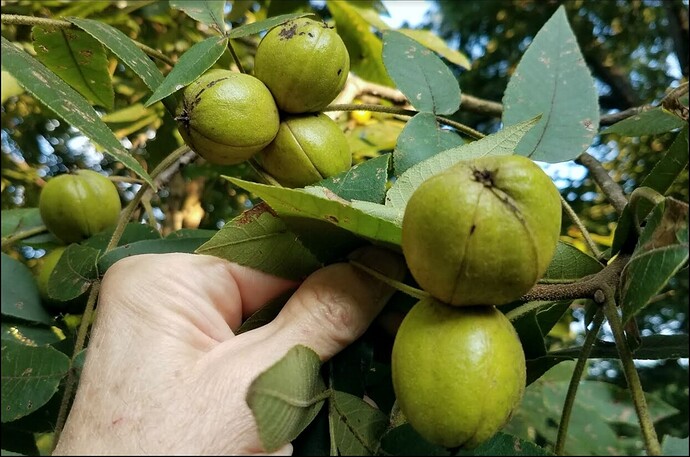 It is loaded with nuts and they look to be good size nuts… well until you take the shell off. It is quite thick (hear that is a trait of the mockernut). 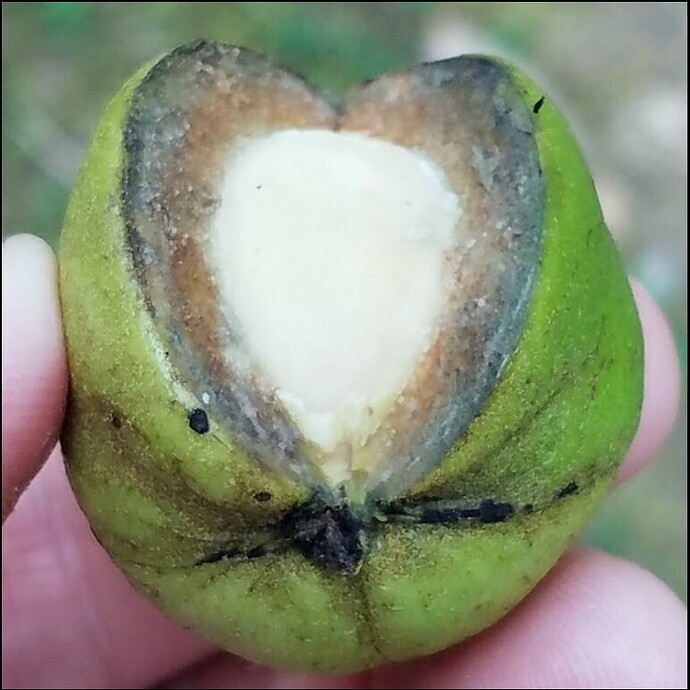 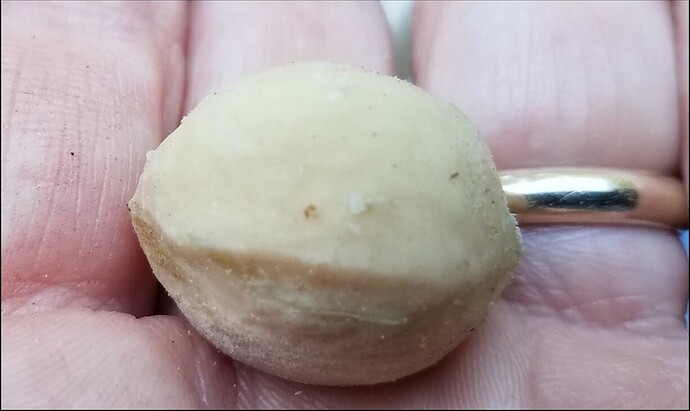 Once the shell is removed the actual nut is quite small. 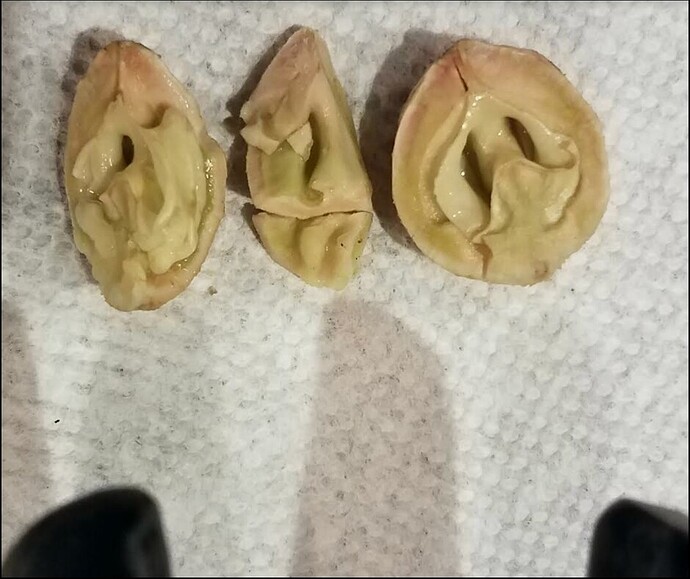 My old antique cast iron nut cracker made quick work of it, and cracked it nicely. Two tries and it was cracked nicely, but not crushed. Worked very well.

Don’t think the nut is fully developed or anywhere near ripe yet – inside that tiny nut the nut shell is quite thick, and the nut meat itself looks to be quite small.

What do you think ? Mockernut ? something else ?

It’s a mockernut. Carya tomentosa.
They’re rarely worth the trouble to attempt to crack - as you’ve already seen, thick shell with prominent internal ribs that trap kernel… most only yield small fragments of kernel that you have to dig out with a nutpick. But they may be the most flavorful of the hickories.
I’ll usually gather a few to crack and throw in the pot when I’m cooking down shagbark nutshells & husks to make ‘hickory syrup’, just for the rich flavor they confer.

“But they may be the most flavorful of the hickories.”

Mockernut has the distinction of some trees making outstandingly good flavored nuts and other trees with nuts that are bland and flavorless. I can show you a Mockernut tree on Natchez Trace that is the best flavored I’ve tried and I can show you another growing at my old place in Hamilton Alabama that is bland.

This other thread might interest you, especially with regards to shaggy barked hickories that show traits not altogether consistent with shagbark hickory ID.

What kind of hickory is this? General Fruit Growing

I’m trying to identify the hickory trees on my place near Yadkinville, NC, partly because I’d just like to be able to identify the trees on my property but also because I grafted a Grainger shagbark hickory this past spring, and I was hoping that I had shagbark hickory trees in my woods that would provide the cross-pollination. I feel confident that I’ve identified several mockernut and pignut trees, but there are several other trees (at least 4 and in different areas) which appear to be the sa…

Thanks @cousinfloyd … I read that thread…

Never knew there were so many different types of hickory trees.

I will collect and try some of these mockernuts… red hickory… and the pig nuts… while squirrel and ginseng hunting this fall… will keep my eye out for others… has to be a shagbark around here somewhere.

My BIL works with a crew that mows the Natches Trace… last year he said they found a pecan tree on the trace… storm had blown it over. He said it was loaded with pecans. They had to remove it.

If it truly was a pecan tree and was loaded with pecans… would there have to be others in that same area to pollinate it ?

He also has 3-4 huge walnut trees on his property and said I could collect all I wanted.

If it truly was a pecan tree and was loaded with pecans… would there have to be others in that same area to pollinate it ?

Pecan is not native over most of the Trace with exception of some areas in Mississippi. If they found a tree, it was probably from a nut planted either by birds or by some visitor who dropped a nut. Either way, there are probably more pecan trees in the vicinity that could provide pollination. Even if the tree was totally solitary with no other pecans with miles, it is still possible for some pecans to self-pollinate, especially if it is a protandrous tree.

I planted pecan trees on my land 21 years ago that are now bearing quite a few nuts. Birds have scattered enough of them so that I now have volunteer pecan seedlings over most of the property. Some of the seedlings are 5 inches diameter indicating they have had about 10 years to grow.

I’ll usually gather a few to crack and throw in the pot when I’m cooking down shagbark nutshells & husks to make ‘hickory syrup’, just for the rich flavor they confer.

Could you elaborate on the hickory syrup you make. How do you make it, what do you use it for, how does it taste, etc?

I’m amazed at how many pecans volunteer in my pastures. I know of a couple pecan trees in a yard nearly a mile away and about a dozen trees in another direction about a mile and a half away, but I really don’t think there are any nut-bearing pecan trees any closer, but nonetheless I’ve found about one seedling pecan per acre in my pastures. How many nuts are birds carrying that far just to drop them, and what percentage of those are germinating and growing and surviving in my pasture long enough for me to notice them? They’re mostly at least 12-18" tall by the time I notice them, and of course, they’re having to compete with the grass, they’re getting mowed down to 2-3" a couple times per year, plus possibly getting grazed down by my cows and/or goats.

It seems like I’m finding more pecans than I am mockernuts and pignuts, even though there are plenty of mockernuts and pignuts in the woods immediately surrounding my pastures, but maybe that’s just because I pay more attention to pecan seedlings because they’re potential rootstock for me. By the way, the trees I find volunteering in my pastures most often are persimmons. Callery pears and black walnuts are also pretty common. I also see mulberries, ash trees… Other trees like hackberries and red-cedars seem common in fence lines where they can escape mowing. I guess they’re not as tolerant of getting mowed down as the persimmons, etc.

I’ve never made it, but I can vouch that it tastes great, very flavorful.

jaunders1,
Historically, it was ‘hickory bark syrup’… folks peeled strips of exfoliating bark from shagbark hickory trees, broke it up into pieces, boiled it, strained off the ‘liquor’, then added sugar and cooked it down.
I decided to try using nutshells left over after I cracked and picked out nutmeats from my shagbarks and shellbarks - cleaner, less bug frass, bird poop, lichens, and poison ivy rootlets than bark!
So, I just fill a big pot with nutshells - and there will be some kernel fragments in there as well - I usually pitch in a few hickory nut husks I’ve kept just for that purpose… they lend a darker color. Fill pot with water, boil for a few hours - or all day - replenishing the water as needed.
I strain the ‘liquor’ through an old t-shirt, then add 1.5 cups white granulated sugar per cup of liquid, and cook at a low boil for an hour or more, then pour off into clean canning jars, screw on lids & rings and allow them to seal. Depending on how much the syrup has cooked down, some jars will have some of the sugar crystalize out over time - I like mine thick, the consistency of Karo syrup, but if you’re accustomed to most of the watery maple-flavored pancake/waffle syrups available in the grocery… well, you don’t need to cook it down much, and may not have the crystallization issue.
I made a batch this winter using only nut husks… it came out almost black… but the flavor was great! If you don’t have shag/shellbark nuts or bark available, but plenty of mockernuts or pignuts, you could just crack the nuts in a vise or pair of vise-grip pliers, and boil the cracked nuts and husks. I tried cooking nutshells in the Crock-Pot before, and it just came out a lot lighter in color than I liked… but the slow-cooker we have now actually boils stuff on the high setting, so works better, and doesn’t heat up the house as much as keeping a pot boiling on the stove all day - and I don’t have to worry about it boiling over or boiling dry as quickly.

Reminiscent of maple syrup, but tastier to me.
It’s good on pancakes, waffles, French toast, hot cornbread, ice cream… and you can whip it into room temperature butter to make a sweet, hickory-flavored butter spread. It’s been long enough since I did that, I’d have to play around with measurements to get it right.

Cuzn…
Bluejays and crows are infamous for carrying away pecans… and I have to shoot
several crows every year in the pecans 30 ft from the house - but you only get one chance! Woodpeckers carry a bunch away, too… there may be more woodpeckers ‘planting’ volunteer pecans around my place than crows and jays. It looks like they all probably drop quite a few… like you, I’m finding them popping up all over the place… what a problem to have! ;>)

Kill one and hang it so the rest can see and they’ll leave you alone for the season.

That’s what I do… much to my wife’s chagrin - 'cause they’re right there in the front yard.
She says it reveals my redneckedness.

I think 100 years ago there might have been 5 x as many “rednecks”…too bad the moniker has a negative connotation in so many places. Back then rednecks equaled ‘normal’ and ‘citified’ being the peculiar species. lol 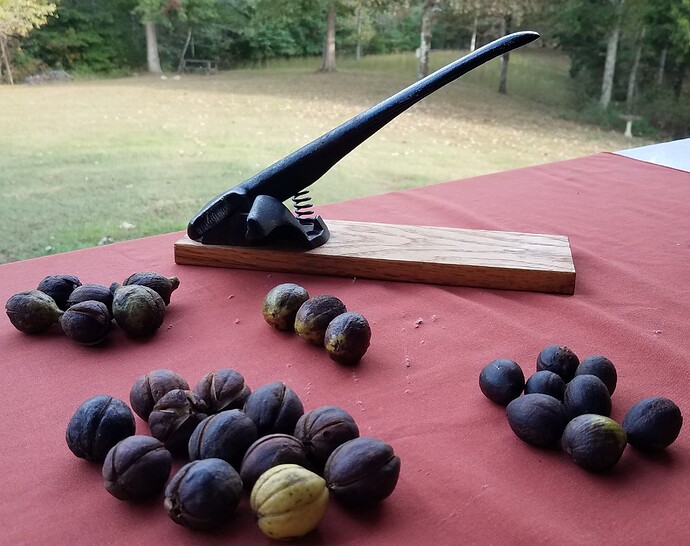 Taste testing a few hickory nuts from a few different trees here on my place… one pignut… one red hickory… others not id’d yet. 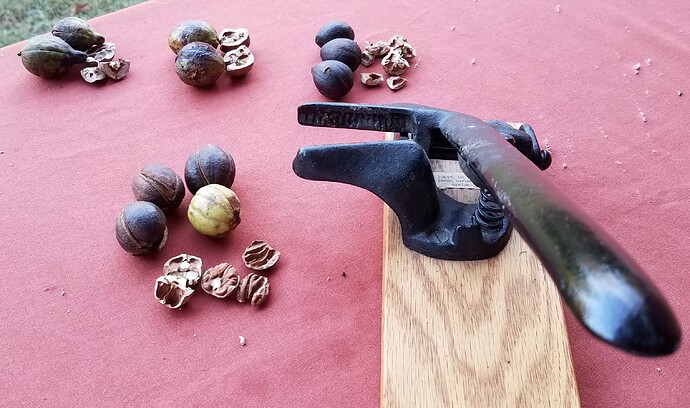 Well unfortunately… none of these tasted all that good. Better than a white oak acorn… but no where near a store bought pecan.

The three in the back are pignut and not sure on the other two… but they all tasted pretty much the same… not bad… but not good either… a little bitter but not much. You could eat them but not sure it would be worth the effort. None of those cracked well either.

The one up closer… is the one id’d as a red hickory. It cracked out much better… got some halves out ok… but flavor was not much better than the other three.

The mockernut at my MIL’s house taste much better than these… very similar to pecan. I will have to collect some more of those.

TNHunter,
If I’m munching nuts, I prefer a pecan. But, if Im cooking/baking… give me a hickory nut every day of the week

@Luky_P - weekend before last, kayak fishing a local river, I found 3-4 hickory trees that at least partially leaned out over the river and they were dropping nuts like crazy.

One was a nice shag bark… and the nuts looked huge. I collected one of those and tried it and it was very good… tasted much like a pecan, but a little different too… in a good way.

I know right where that tree is and may fish that stretch again this weekend and bring home a bag full, if I can find them… many landed in the water but hopefully some landed on the bank too. My luck Squirrels will have wiped them out before I get back there.

I collected probably 50 shagbark nuts in the yard that I’m
building something in. Delicious.