What kind of hickory is this?

I’m trying to identify the hickory trees on my place near Yadkinville, NC, partly because I’d just like to be able to identify the trees on my property but also because I grafted a Grainger shagbark hickory this past spring, and I was hoping that I had shagbark hickory trees in my woods that would provide the cross-pollination. I feel confident that I’ve identified several mockernut and pignut trees, but there are several other trees (at least 4 and in different areas) which appear to be the same species but are different in several respects from the mockernuts and pignuts. Based on the key I’m using to identify these trees I’d say they were shagbark or maybe southern shagbark, because they have somewhat shaggy bark and the leaves I’ve found on the ground underneath them all seem to have 5 leaflets, but shagbark and southern shagbark nuts are apparently supposed to have thick husks without ridges along the sutures, and the nuts I’m finding all have very thin husks with ridges along the sutures. But the only trees in the identification key I’ve mainly been relying on that are supposed to have ridges along the sutures are supposed to have buds that to me look quite different from the buds on these trees – I think they’re called imbricate, and the buds on these trees look more like pignut buds, which I believe are termed valvate – and are supposed to have at least 7 leaflets per leaf.

Here are some photos. The bark and twigs/buds are from the same tree. The nut might have been from a different tree (that appears to me to be the same species), but the nuts under the tree in the bark and twig/bud photographs looked identical to me. 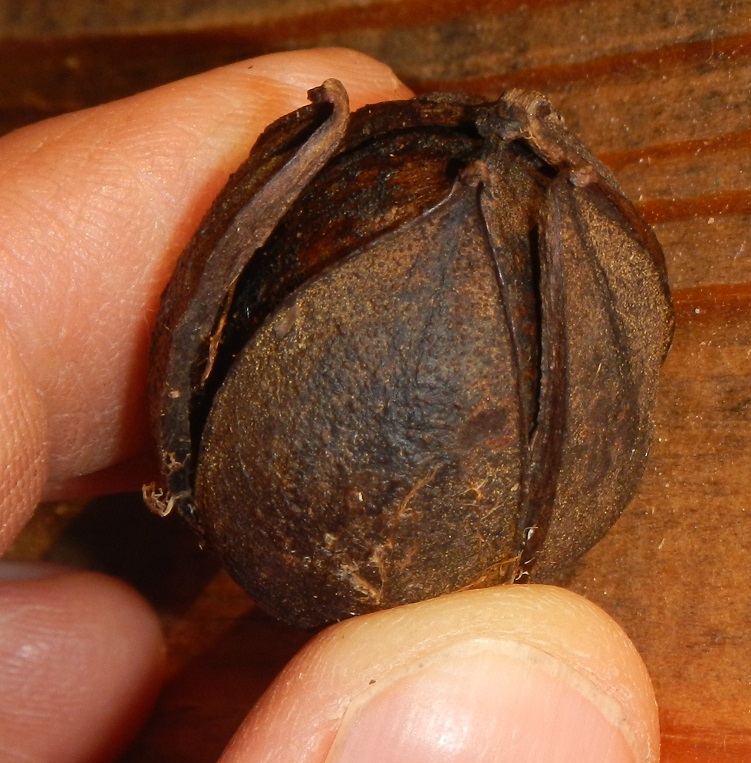 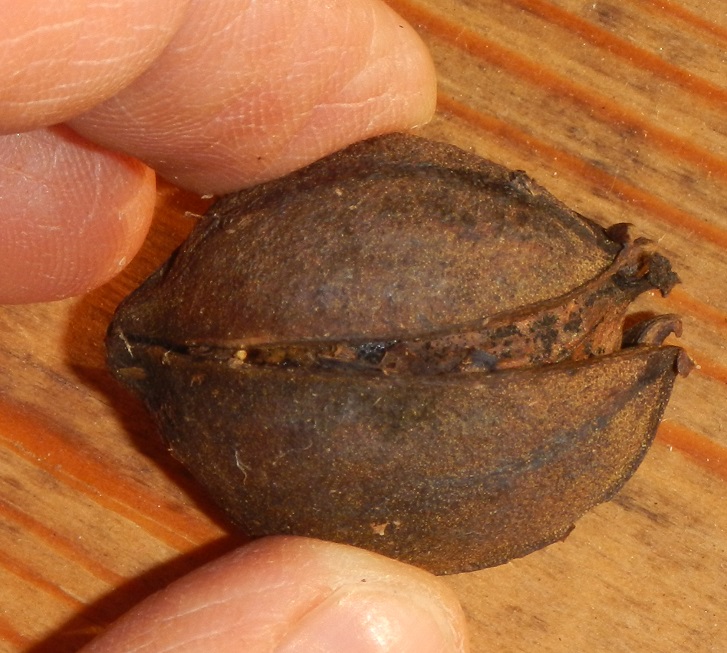 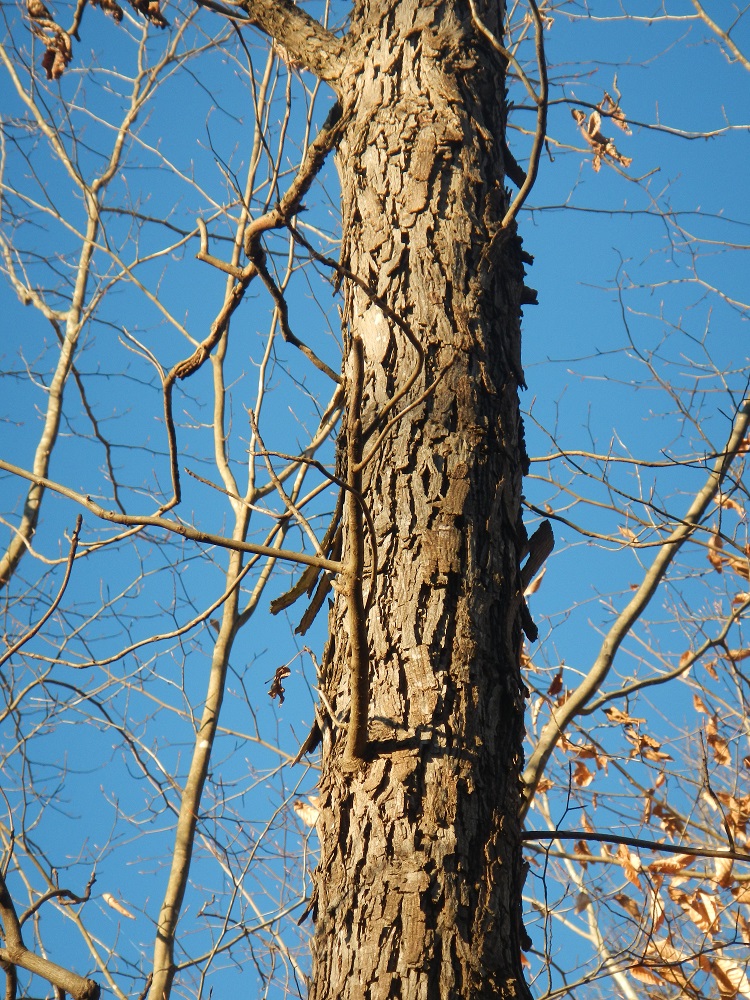 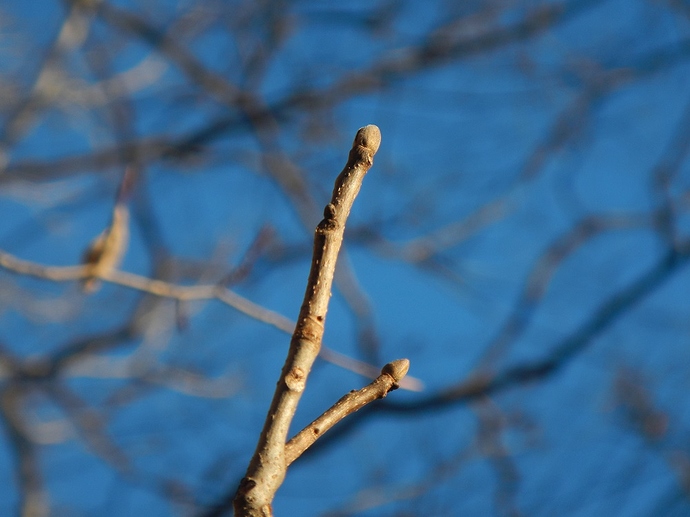 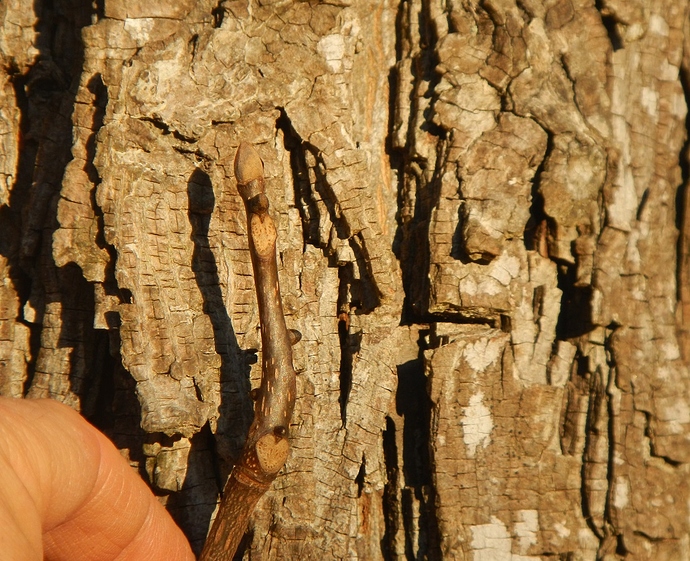 ?Mockernut Hickory or could it be a hybrid

I live about a half mile from Davie County (but the opposite side of Davie from the Yadkin). I’ve never found an arrowhead.

I’m confident I’ve identified other trees on my property that are mockernuts, but the mockernut trees have larger buds, much thicker husks on the nuts, bark that isn’t at all shaggy like in this photo, and more leaflets per leaf, so that’s why I feel the trees in these photos aren’t mockernuts.

I have wondered if it isn’t some kind of hybrid, but would I find four separate trees in different areas of my property that were all the same hybrid?

Looks like pignut, C. glabra, to me.
Definitely not shagbark.

Carya cordiformus or Carya glabra or Carya tomentosa, not sure which?

The trees I feel pretty sure are pignuts (1) have much less shaggy bark than the tree in this picture (as with the others that look the same as in these photos) and (2) they have distinct “pig’s snouts” on the husks which the nuts under these trees don’t, and (3) they lack the ridges along the sutures of the husks which these nuts do have. Do you think it could be a pignut anyway? Do pignuts sometimes have bark as shaggy as the tree in this photo?

Lucky, what do you think about the idea that these trees are all basically the same hybrid?

@BlueBerry, the buds seems completely wrong for bitternut, and bitternut trees don’t have at all shaggy bark either, do they? Everything about the nuts seems about perfect for bitternut, though: ridged sutures, thin husk, no “snout”…

As for mockernut, the reasons I think it’s not mockernut are, like I said above, that the trees I feel like I’ve confidently identified as mockernut trees have much larger buds, much thicker husks on the nuts, bark that isn’t at all shaggy like in this photo, and more leaflets per leaf than I’m finding on the leaves under these trees.

From my perspective it seems like either the information I’m reading from the University of Tennessee is wrong or there’s another species of hickory that just wasn’t included in that information or any of the other sources I’ve looked. But it also seems very possible that I’m just making mistakes that are misleading me.

I’m no hickory expert but I’ve never seen a shagy barked pignut or mockernut. I’ve got a lot of both here, assuming I ID’d them right.

I believe hickorys are highly variable .
Many do not read, and don’t fit in our books .
This may be carya ovalis ? Or a hybrid of it “x” C.glabra
Or as is said in grays manual of botany;

"Several vars.recognizied, some of these perhaps better considered as mere forms "

I spent the day today thinning around hickorys here, many of which I have no idea what kind they are…?
Highly variable !

Some links may help.?
http://bioimages.vanderbilt.edu/pages/compare-hickories.htm

bark & twig look similar to the C.ovalis on the farm here, but the nut/husk is not
right… mine have thick husks like shagbark, but brown nut, rather than white…crack out about like average wild shagbark
C.ovalis here gets ‘shaggier’ the higher up the trunk you go…lower down, it’s similar to C.tomentosa

hybrids? possible, but probably only if chromosome numbers are similar.

I believe hickorys are highly variable .
Many do not read, and don’t fit in our books .

My honeybees are really poor readers, too!

hybrids? possible, but probably only if chromosome numbers are similar.

But multiple separate hybrid trees in different places around my property that all have identical traits? Does it seem to make sense to assume that hybrids would be rare and variable when they did occur? My thinking is that, especially given that these are all native species, that if two species cross-pollinated so readily that they would cease to be separate species at all. Is that not the case generally (i.e. with other species besides Carya species)?

Not sure about chromosome number ?
But here is another link;

(“Manning (1950) noted that C. glabra readily hybridized with C. ovalis when the two occurred together, with hybrids confusing the distinctions between the species.”)

(“Manning (1950) indicated that “the two pignuts, Carya glabra and C. ovalts, are the most difficult of all species in the northeast to separate” and can only be separated on the basis of “mature fruit col- lected in November.” The length of the staminate catkins (pers. obs., Krochmal and Krochmal 1982) appears to be an addi- tional character to aid in and extend the period of identification of these two par- ticularly enigmatic species.”)

I suspect that’s probably about right. Maybe later in the day I’ll go get my “Manual of Woody Landscape Plants” by Michael Dirr and look it up.

the pecan hickories are diploid, with 32 chromosomes
the ‘true’ hickory group has both diploid & tetraploid members.
mockernut is tetraploid 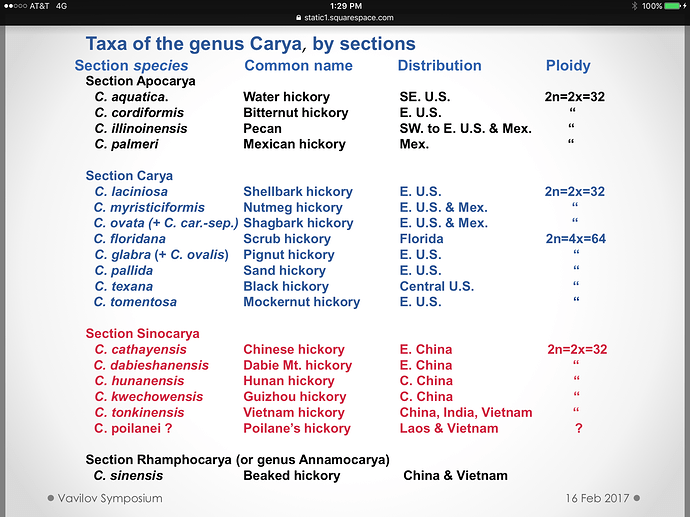 Dirr says there are 17 species of Carya in North America.

If it is Bitternut, the dormant buds will be yellow, which is a distinctive characteristic.

But, if bloom time is similar, many hybrids happen in the wild.

I’ve not seen discussions on this with regard to Carya, but the oak folks look at, and discuss at length, species introgression and ‘hybrid swarm’, etc. I’ve read some discussions on oak populations out west that are hybrids of bur oak with other western oaks like Q.turbinella, etc., but the bur oak ancestors have long since disappeared from the scene.

As to graft compatibility, I don’t know. First successful Carya graft I ever performed was a C.laciniosa scion onto a seedling hickory in the edge of the woods… probably mockernut. It took and grew for one year then died. Incompatible? I dunno.
I think there’s still a lot to be learned about rootstock compatibility with regard to Carya. There are some hickories that some folks claim won’t work on pecan… but other folks refute those claims. I’ve seen claims that James hican and Fox or Davis shagbark will work on mockernut understock… I’ve got a piece of James grafted into the top of a young mockernut that’s been growing for 10 years or more… time will tell if it lasts longer.

From what I can see it is possibly C. Myristiciformis. A picture of the leaves late next spring should settle it.

You can find pictures of Nutmeg hickory with sharp buds. I looked at dozens of Nutmeg hickory trees just south of Selma AL a few months back that had more rounded buds similar to this tree. There were plenty of leaves on the trees and an abundance of nuts to provide positive identification. I should also note that the pictures of Nutmeg hickory nuts show a limited number of types. I saw at least 7 different nut shape variants such as one tree that produced flattened nuts, one that produced “square” nuts, one that was longer than the diameter, and one that was short and fat as shown in typical pictures.