I am in northeast Texas and have had a nectarine tree for about 6-7 years. Every year it blooms and I think that this is the year that I am finally going to get some fruit and then the fruit ends up falling off. I figured out that plum Curculio were hitting the tree last year and this season I have sprayed surround several times in hopes of keeping the Curculio in check. We have had several rains in the last few days and when I checked my tree this evening found this. Most of the nectarines are larger than a golf ball but I can see that something is hitting them hard. There is a bunch of clear sap almost like a sticky jelly oozing out of most of them. Any ideas on the insect and what I should spray for them, thanks.
image|640x480 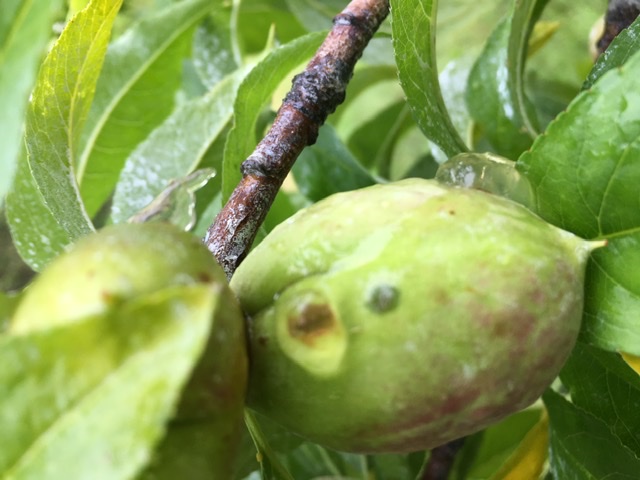 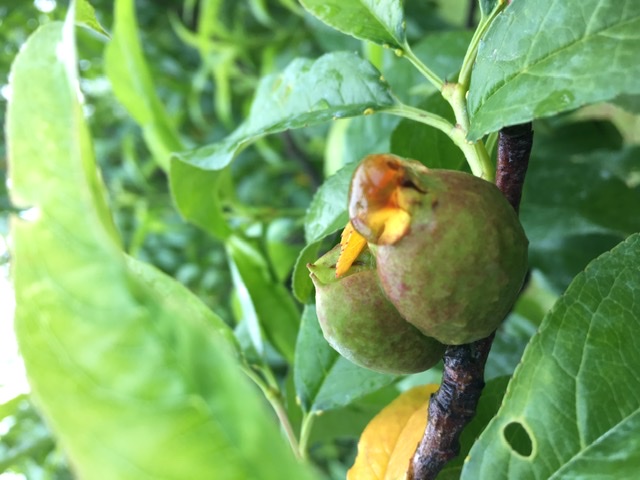 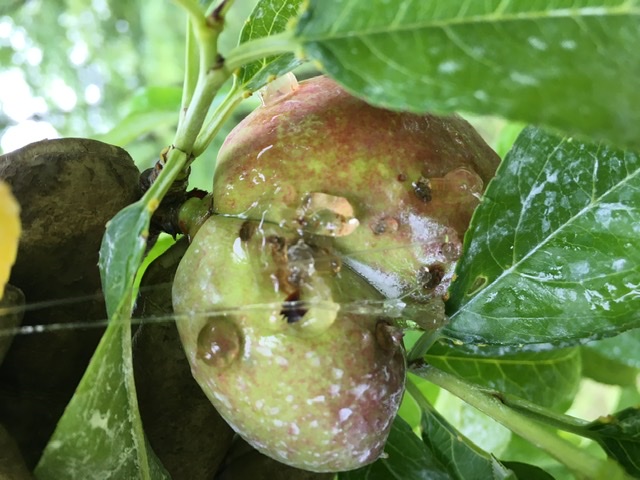 Looks an awful lot like curculio damage to me. Are you sure you got the Surround on before the curculio laid their eggs? Egg laying generally occurs in the two weeks after bloom. The eggs hatch after a week or so, and then the larva spend another couple of weeks crawling around inside the fruit before emerging and dropping to the ground. What you’ve got looks like that emergence.

Surround only deters egg laying. If you don’t have good coverage when the adult Curculio show up to start laying, it won’t do any good.

I agree, it looks like the curcs got in there. Surround takes quite a bit of practice to get effective control with, it is not like other sprays. Since it is only irritating them you need to constantly have a good coat on or you will get damage. See my spray guide at

where I wrote a whole bunch of tips on Surround spraying.

It has been an odd curc year for me, lots of rain but lots of cold as well so the activity overall has been lower than usual.

I sprayed surround several times during the season and felt fairly confident that I had sprayed before the curcs got to them because I was not seeing any bites but apparently I missed them. At what point/size do they stop hitting nectarines? If I wanted to try something other than surround what is the best thing to use?

You want to spray from shuck split (not long after petal fall) until they are dime-sized. Sometimes you get strikes even later.

You also would need to pick off / pick up all those damaged fruits, part of the problem is you probably have a massive army of curcs from all the curc breeding your nectarine has been doing. Even Surround will not help against thousands of curcs on one tree.

There are many poisons that can be used to kill them, I don’t use it though so am not particularly knowledgeable. See Alan’s s schedule for example:

Alan Haigh- The Home Orchard and Nursery Co. REPRINT PERMISSION FROM ALAN HAIGH REQUIRED Low Spray Schedule for Home Orchards in the Northeast Here’s my spray schedule for the scores of orchards I manage around SE NY adapted for home owners managing a few fruit trees. It has functioned well for me for over 2 decades, although J. Beetles and brown rot of stone fruit increases the number of sprays and necessary pesticides some years some sites. Stink bugs are also an increasing problem,…