Thanks Luis! I sure wish I had a proper farm, this is a small suburban backyard. If I ever get my hands on a few acres, I’ll go hogwild planting everything imaginable.

If the fruit drops off, it’s overripe. I contrasted fruitier breadfruit with the vegetable types we grow here, but all of them sweeten up at maturity. They must be picked underripe, fully grown but still green and hard. They’re ready to harvest when the fruit gets covered in white sap droplets, but before it darkens up. To harvest off a tall tree, you gotta stick a net and a knife on the end of a very long pole… It’s complicated.

Yep, Sunroot / Sunchoke / Jerusalem Artichokes are one and the same. With my sister’s help, I managed to get three varieties from OIKOS: Spindel, Red Fuseau and Supernova. So far, they’re loving the heat, but they were also targeted by the chickens.

The aerial tubers are referred to as bulbils, but I’m not sure if that’s a botanically correct term. The long root with small bulbils you mentioned sounds like Nagaimo, a type of Chinese Yam (Dioscorea polystachya, syn. D. batatas / D. opposita). I have it, along with a few other Chinese and Japanese Yams. Raw yams are slimy, cooked they’re vaguely like potato, very very yummy. Some of the yams in the Sunroot patch are purple-rooted types, Florida Ube and Dark Night St. Vincent. Haven’t tasted them, though.

Yep, that plant looks just like mine! Madeira Vine (I call is Basell Potato 'cause it’s easier for others to see it as a vegetable that way). Aerial bulbils, underground tubers, edible leaves and apparently fragrant blooms (mine hasn’t bloomed yet). I’ve tasted the leaves, a but like spinach but slimier (though not unappetizing). Raw bulbils were very slimy. Cooked, they were dead ringers for potatoes. I haven’t tried the roots yet, but I will once I’ve propagated it. Try it, I think you’d like it.

Thanks for the links! A chicken tractor sounds great, but it’d have to be a smaller one. The upper yard is a bit small. Past the breadfruit is a big o’le slope that ends in another yard at the bottom, I could close that off and keep chickens there, but it’ll take time. It’s dense with Guinea Grass, enough to keep me busy weeding for a long time. Chickens can mow a lawn down to the dirt, but Guinea Grass is too much for them to handle.

I am a little jealous. Beautiful breadfruit tree.

IL847, in any case you can grow yacon in the Midwest. Not the same as Caesar’s cornucopia, but yacon will produce here.

I love everything you do in your BYO its very impressive and its great you are spreading the word on breadfruit the tree to feed the world!
Yeah definitely adjust it and maybe some big wheels for your hills or just smaller and 2 person liftable, if you make it moveable you can use them to degrub and fertilize and you do not make a area for rodents to move in and you can use some plastic fencing to give them space to roam in the day but if you keep it a pretty small area usually they will take care of the big grasses and degrub each area much more effectively and then you would rotate them every 5-7 days.

It grew off a root from the neighbor’s tree, and quickly took over the patch of slope. It’s a grove! I gotta cut down the rest 'cause they don’t produce well at that density. There’s also a Pedalai tree hidden somewhere in the grove, trying to compete with its cousin for sunlight.

My grandmother has a Camansi Breadnut tree, and I’m thinking of grafting Breadfruit onto a seedling. It should be smaller, bushier and more stable that way.

Breadfruit is definitely a world-feeding tree, and a personal favorite of mine. I have an acquaintance over on the west side of the island who managed to import several of the Pacific cultivars, and I’m gonna see if he can get me some root cuttings. I’m also growing Maya Breadnut, and I’m hoping to get a fertile male-female combo (I have several seedlings, hopefully more than enough).

I’m going to try for a chicken tractor, and despite my previous statement, I’d like to test it over the Guinea Grass. Maybe the chicken’s grubbing is exactly what I need to kill it off once and for all. Even if they don’t eat it, they might scratch it down to the dirt.

A friend of mine delivered some cooking bananas the other day: Plantains and Pana-plátanos (I think the official name here is “Hawaiiano”, and they’re huge!). I have loads of bananas here, but haven’t gotten my hands on those yet, and I think they’re gonna bring me some roots for planting. Here’s hoping! The fritters were excellent. 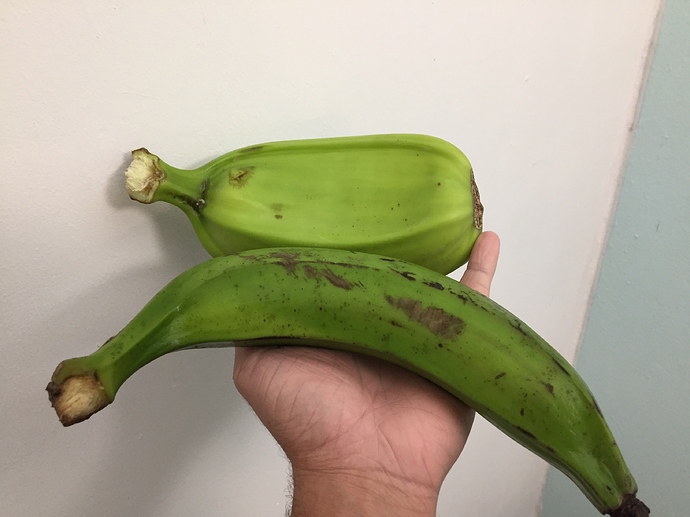 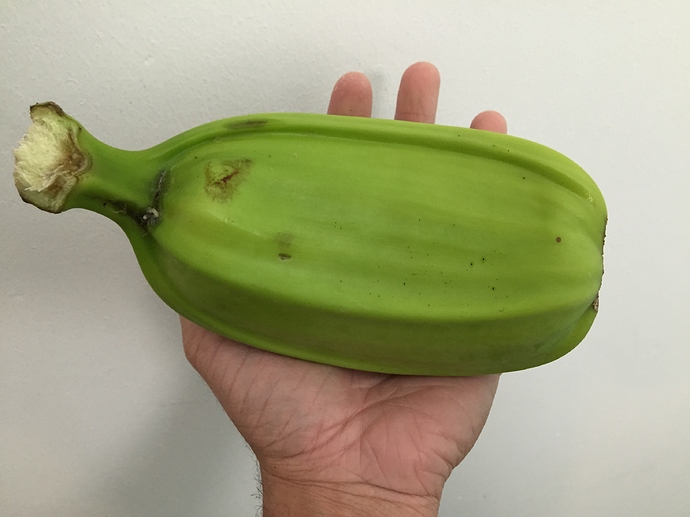 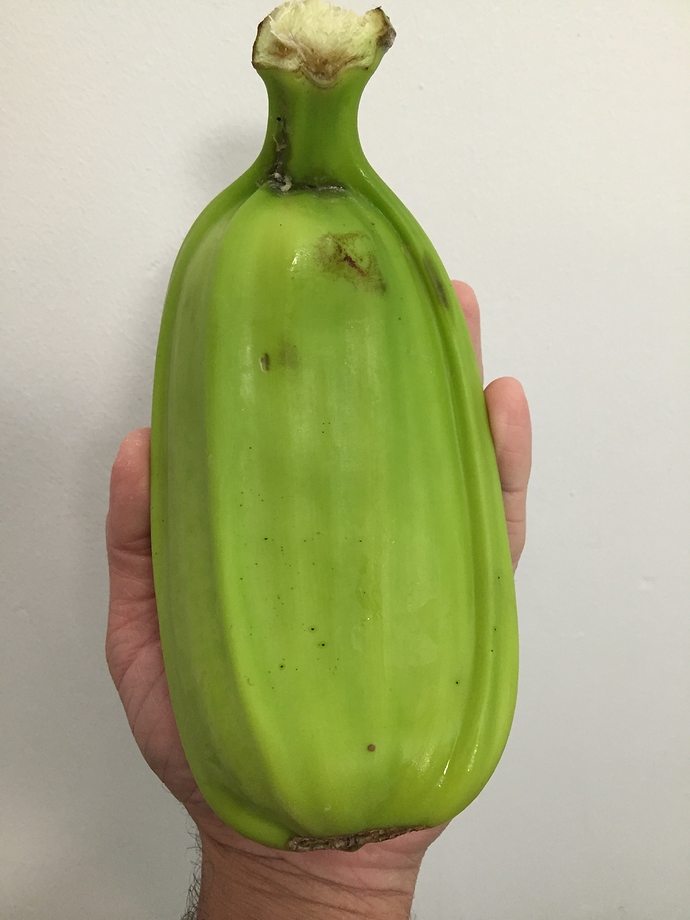 I am very jealous!

Hi Caesar, what is the name of the florida pistachio? I’m not finding that or chuta in searches? What part is edible? Thanks, Dan

It’s an edible variety of Jatropha curcas, originally from Mexico. The seeds are eaten as nuts, I’ve heard their taste likened to Sunflower seeds. I got mine as a cutting through another forum. The owner of the mother plant has eaten nuts off his tree for years, so I trust that they really are non-toxic. I wouldn’t grow them from seed just to make sure there isn’t any cross-pollination or genetic reversion to toxic stock, but they’re readily propagated by cuttings; I already took a cutting from one of my plants, and it was quick to sprout.

Our grocery store does carry yacon root but all are waxed. Can I use these waxed root to grow into a plant? Or should I buy it from seed company? My concern is the eyes might be damaged during the waxing.

No, the edible part of the Yacon is a storage tuber. The Tuber will not grow eyes or buds

I Hate squirrels. I have 2 oca left.

It grows eyes in somewhere else not like a sweet potato?

It has a Jerusalem Artichoke-like rhizome that is used for propagation. From that rhizome grow the stems, and the edible storage roots grow either from the stems or from the rhizomes as well (I’m not sure).

You might consider it more like cassava than sweet potato (cassava’s storage roots are also useless for propagation).

Did the squirrels eat the plants or the tubers? If the latter, you may have to start them indoors.

the tubers. I will be doing that next time.

Thanks, I think I got it now

Yacon does not make seed. It makes 4 or so large roots, and 4-6 bulblets, golf ball size, which when planted will turn into a new plant. These bulblets need to overwinter in your fridge, with you checking the bag every now and again for mold or dryness. In my garage it was too cold and I lost them one year. You can plant them before last frost but not much before, maybe 15 days before.

It is the season for the Chinese toona leaves. This time, I chopped it up and mixed with eggs and made scrambled eggs. 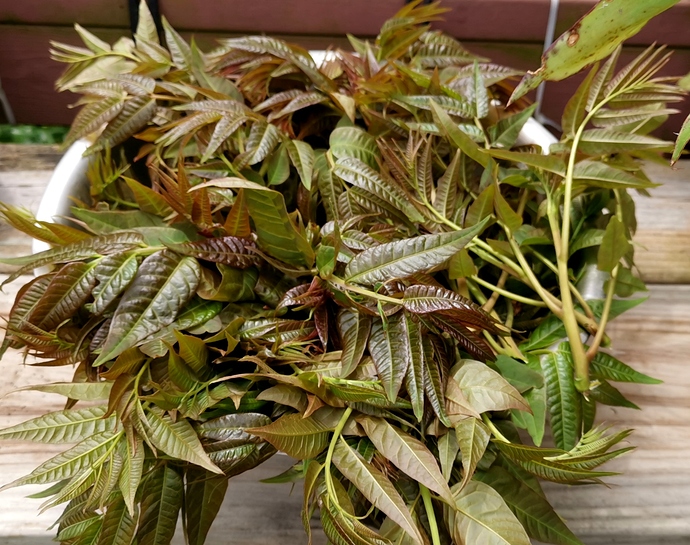 I’ve been looking at mine and debating cuttings some off to cook with as well.

How large is yours?