8 years. I have been trimming it every year to the height that I can reach, about 7~8 feet maybe. Harvest the shoots while they are young. It will grow more shoots

Not sure anyone here had this spring veggie before. But it’s very popular in Chinese community. It has been eaten as spring wild green for maybe thousands of years. 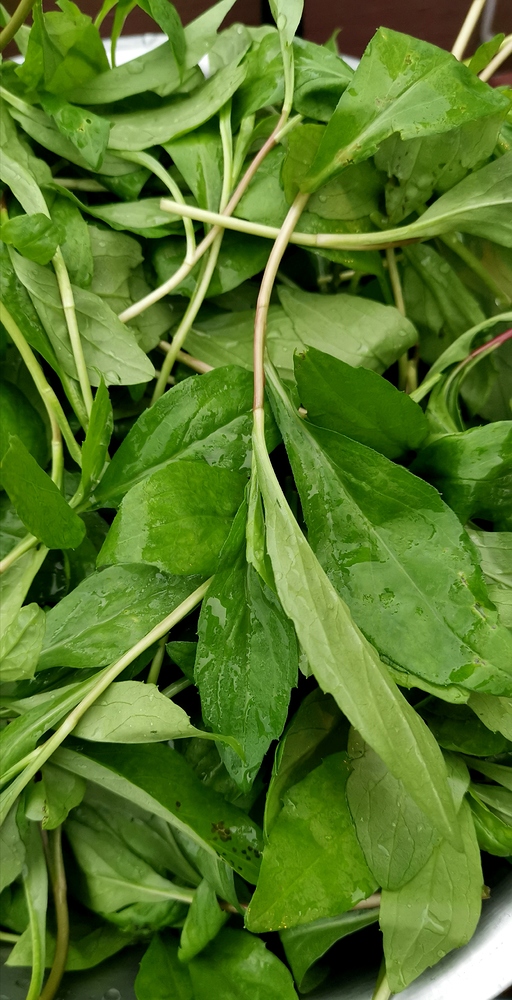 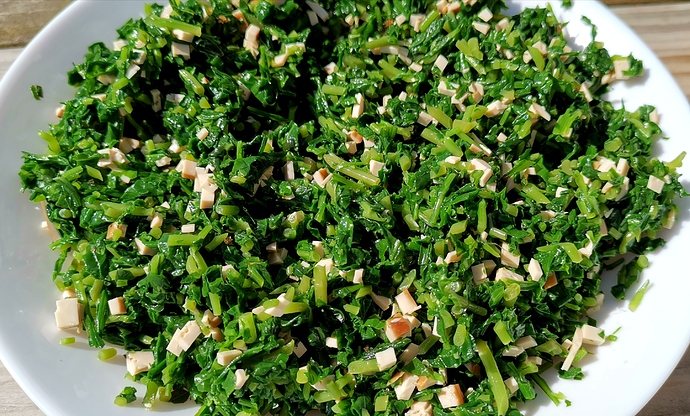 What is the name of this veggie? I don’t recognize this.

How do the Toona taste? And the Kalimeris?

First breadfruit of the season! I literally went out on a limb to get it, grabbing onto branches for support while walking on the old avocado trunk in the slope (if it had broken, I would’ve rolled downhill over the Guinea Grass).

First my mother cut it in half, then in slices. She cut the core off the slices and peeled off the skin. Then she cut it into chunks which were subsequently fried halfway. Then, as with their plantain counterparts, the chunks were flattened and fried the rest of the way. I stuffed my face with tostones and I regret absolutely nothing! Light and crispy on the outside, slightly moist & dense on the inside, rich & buttery flavor. Excellent with onion or celery salt, but I just ate 'em with plain salt. Better than french fries or cassava fries. There were loads more than the pictures would indicate, but I was too hungry to keep playing photographer. 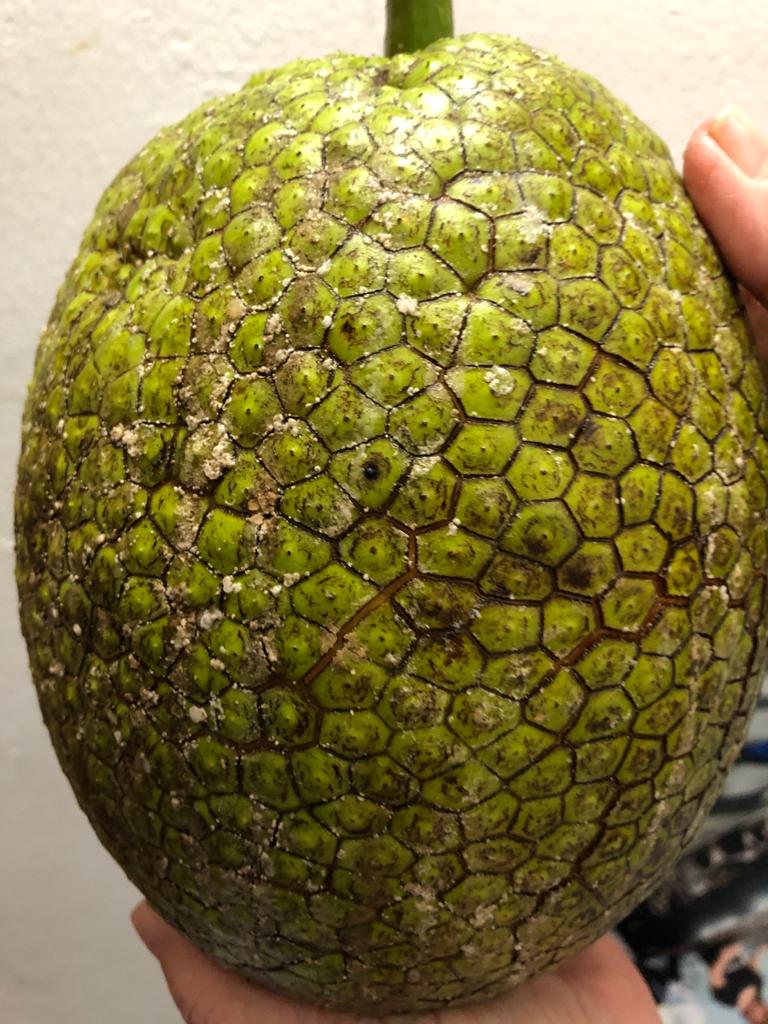 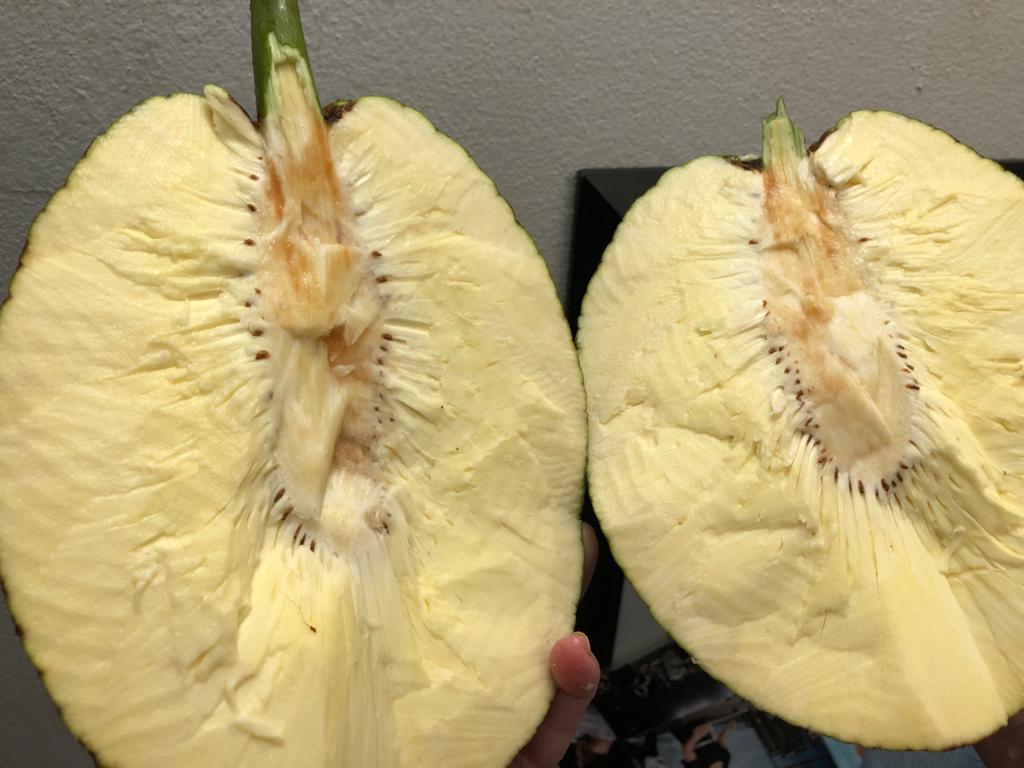 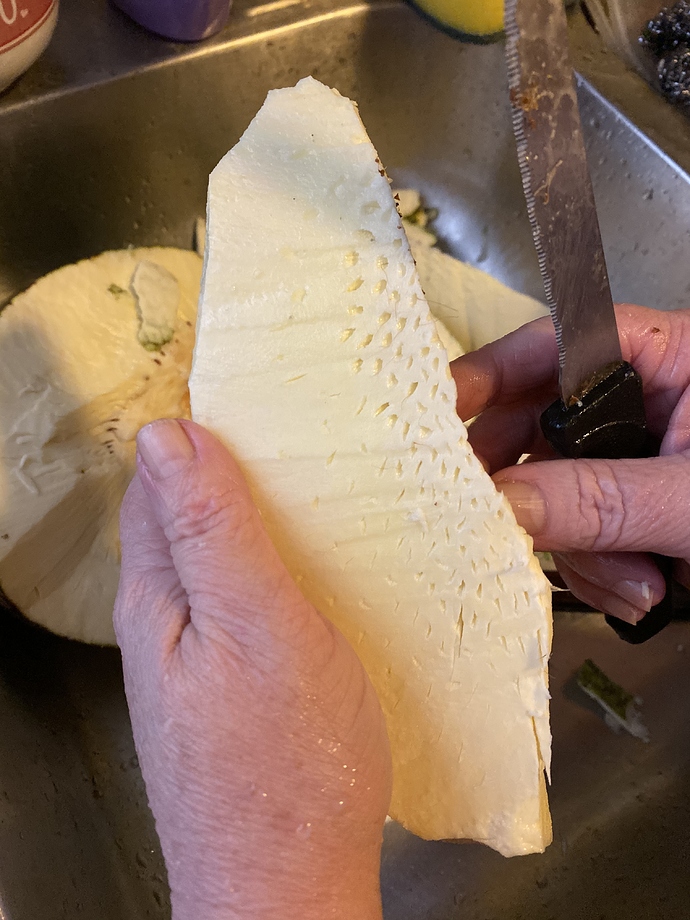 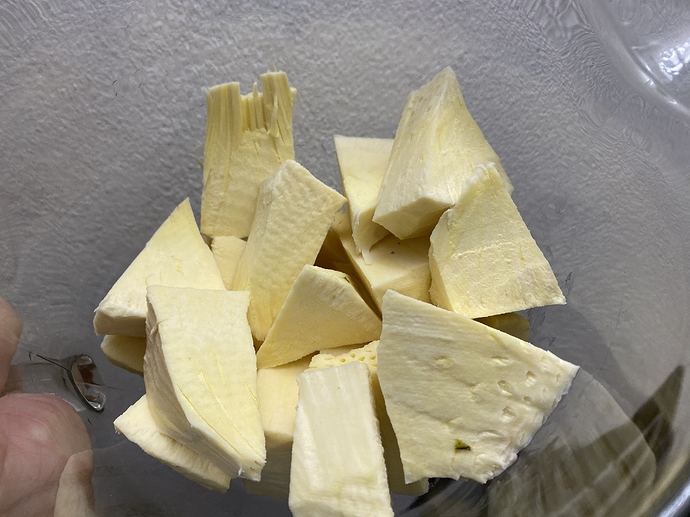 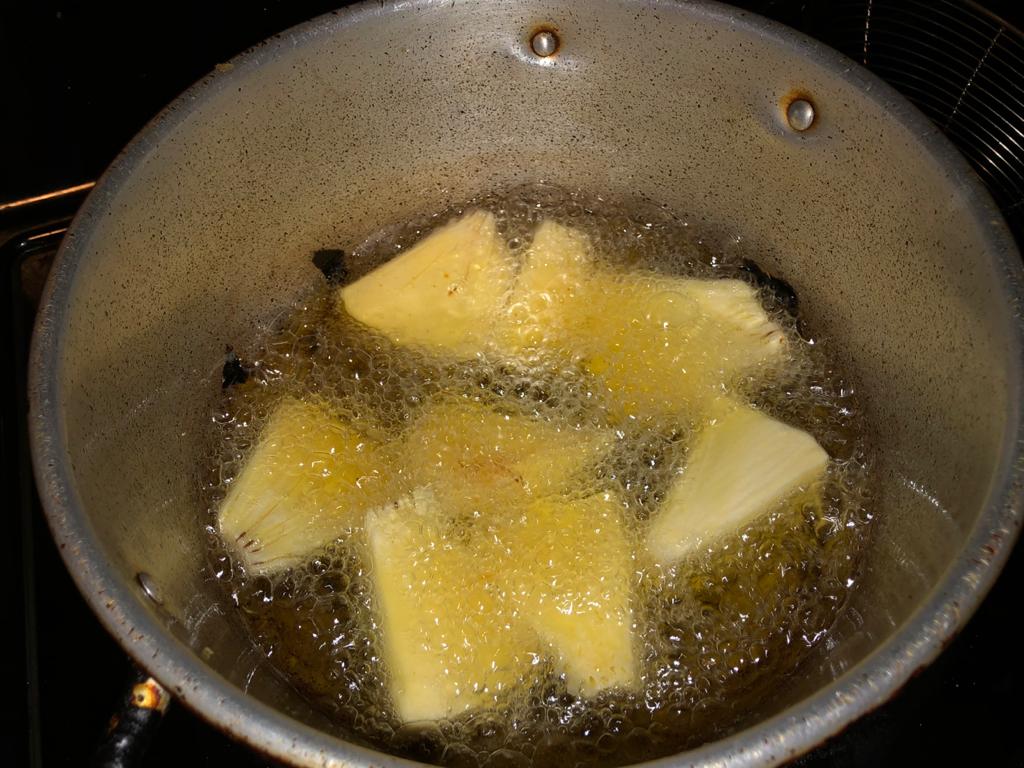 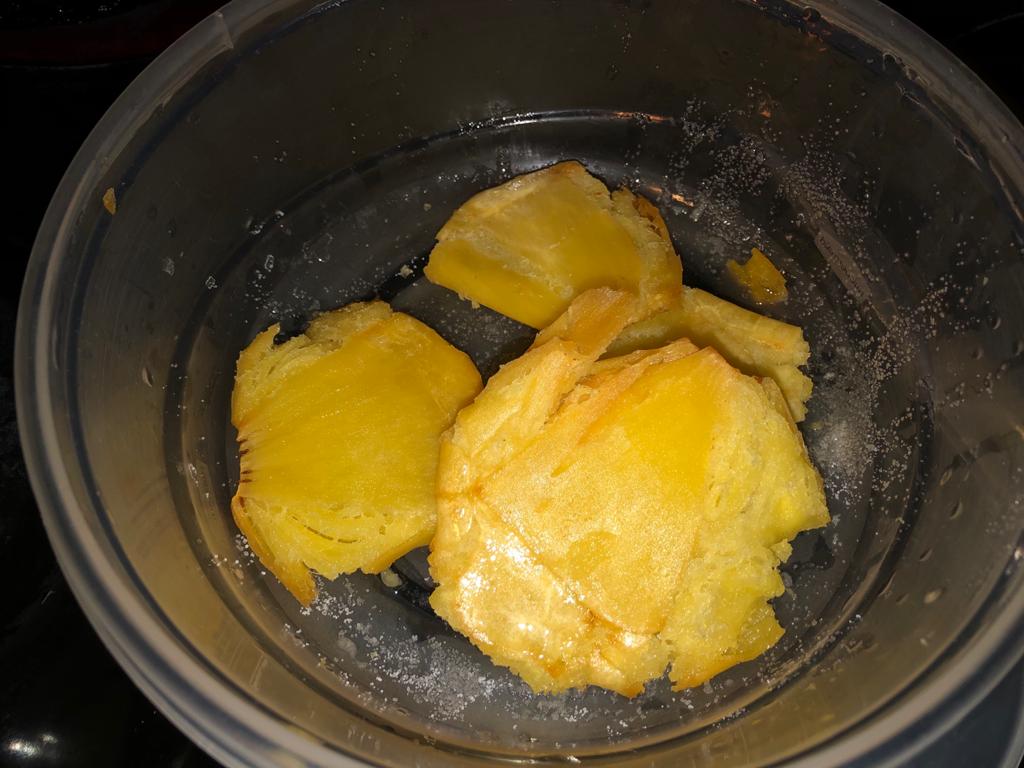 Chinese toona has very distinct aroma that is why it also is called flagrant spring. Only the tender leaves are edible.
Kalimeris indica also tasted very different than the common veggies in flavor or aroma., hard to describe it. It is also the terder green tip is good as veggie but the rest can be herb/medicine

I kinda wanna grow toona now, but I can barely fit another tree as it is, at least for now. Could you get half decent production in a container?

The first thing I though when I saw the Kalimeris leaves was “Gynura”. Not the same thing, but they’re both asters, so they’re related. Have you tried Gynura? Seems like a nice perennial green, but I haven’t tried it myself.

So far the Yacon doesn’t seem to mind my local heat, and the Sunchokes seem to thrive in it. They do seem to wilt when moisture levels go down, but perk right back up after a good watering. The sunchokes already have flower buds (I will be deadheading the flowers, to prevent a takeover).

I recently ordered some Dahlia seeds (hybrid and coccinea) to try my hand at breeding for edible tubers. Got 'em from Cultivariable’s breeding program, so I figure there’s a decent chance of getting something good. Anyone else tried Dahlia tubers?

I’m waiting for Florida Betony seeds in the mail. I tried growing Crosnes / Chinese Artichokes last year, and got a nice little plant to sprout, but it didn’t seem to like my climate even with good soil. The sun wilted it, the shade and water didn’t help much, and it eventually died back without tuberizing… Didn’t expect that. I’m hoping betony will do better for me, since it’s said to tolerate heat better. Apparently it has a milder, more neutral flavor, but bigger tubers.

I’ve also been meaning to try my hand at Triteleia laxa. Sierra Giant and Humboldt Star are said to have particularly big bulbs, but they’re not easy to find, so I’ll probably try the usual Queen Fabiola instead. Are they prolific bulb producers? I don’t expect extreme productivity like with a common vegetable, but maybe something that’s worth growing tucked into a corner somewhere, with an occasional harvest to soothe the snacking impulse.

Yes, you can grow the Chinese toona in pot and harvest its tender leaves. This plant is very adaptable. If it is planted in ground it can grow into a really tall tree. If you want to try, I can send you a small one in the fall or spring during the dormant season.
I found a link how to use it:

I used to have a Gynura plant， but I didn’t eat the leaves. I have read different articles about its toxicity and decided not to try. Kalimeris is in aster family, I think it’s called India aster. It has small blueish purple aster like flowers. Of course I grow it mainly for the leaves.
Here is a YouTube link on how to prepare this veggie in Chinese.

I have found Crosnes is very easy to grow. It is in mint family, as easy as grow any mint. I don’t think heat would be a problem. There might be different reasons that your crosnes did not grow up. If you want try again I have it, can send you some roots.

The sunchokes already have flower buds (I will be deadheading the flowers, to prevent a takeover).

In my country it is extremely difficult (ie almost impossible) to get Jerusalem Artichokes to produce any seed. So I leave the flowers for the bees and other insects. It does spread underground pretty well, this is where you may run into trouble with it being invasive.

Interesting about Gynura’s toxicity, I hadn’t seen that before. That’s one veggie I’ll be crossing off my list.

Thanks for the recipes, I saved them. That goose egg was huge!

The Toona and the Crosnes would be deeply appreciated if you can spare them, thank you.

Is the seedlessness a reproductive issue or a climate one? I don’t mind controlling a clump or a runner, but if seeds start sprouting elsewhere, that’d be an issue. It seems like it’d be harder to control than Guinea Grass (and that one’s a pain, often literally… Leaves that’ll give you paper cuts unless you wear long sleeves). I won’t deadhead the buds, just the spent flowers, to give the pollinators a chance.

I ordered the Triteleia bulbs, and some Huacatay seeds (Tagetes minuta). I’m gonna put the former into any available corners once they sprout. The latter I gotta figure out a place for in the planting scheme, but I’m keen on using them for pesto.

What Gynura you are talking about? I have both gynura procumbens and bicolor… i eat them raw and cooked.

Is the seedlessness a reproductive issue or a climate one?

To the best of my knowledge it is a reproductive issue. They are strongly outbreeding and have self-compatibility issues. We have a few different clones, even cross pollinating rarely results in any seed set, but we may not have compatible clones here. Viable seeds are very rare and difficult to germinate.

I often hear how difficult Jerusalem artichoke is to control, but I don’t have many issues. They grow tall so I find it simple to just pull up unwanted plants a few times during the growing season.

I was referring to both Gynura. And I checked the literature, pyrrolizidine alkaloids (which are toxic to the liver) have been found in both species. Unless your consumption is pretty low (and even then…), I wouldn’t recommend them as a foodstuff.

That’s a relief, I guess I don’t have much to worry about, then. Here’s the first bloom (variety: Spindel): 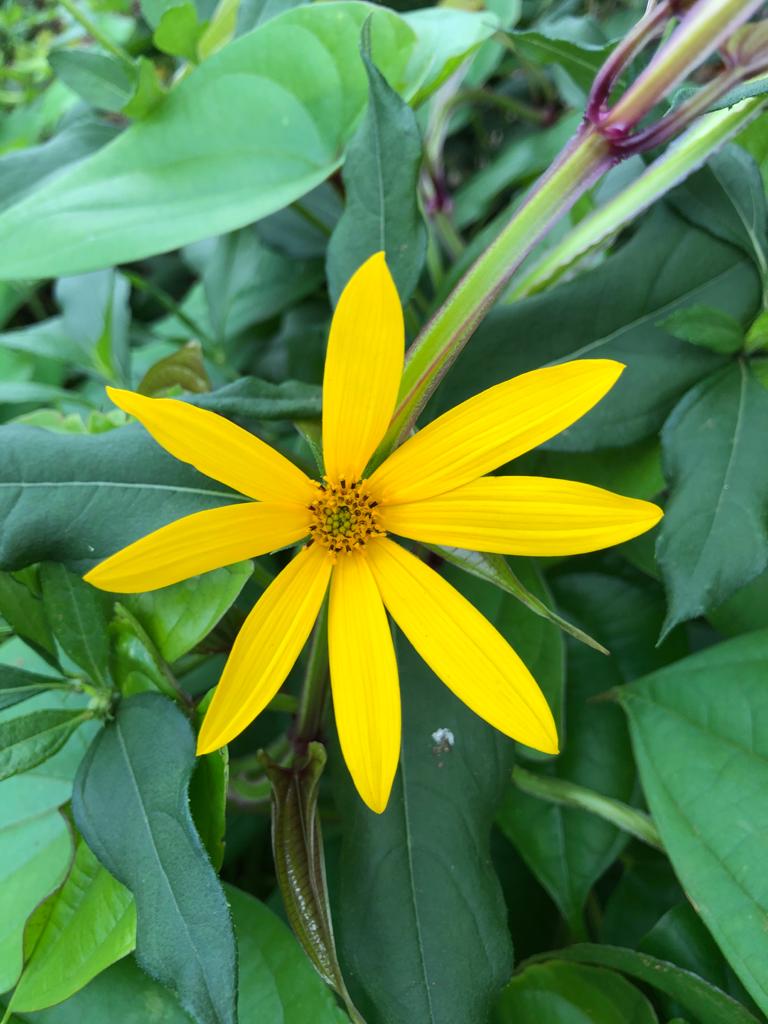 Edit: Forgot to update on the Pitangatuba (Eugenia selloi). It’s not really a veggie, but since I mentioned it here, I thought I’d give it closure. 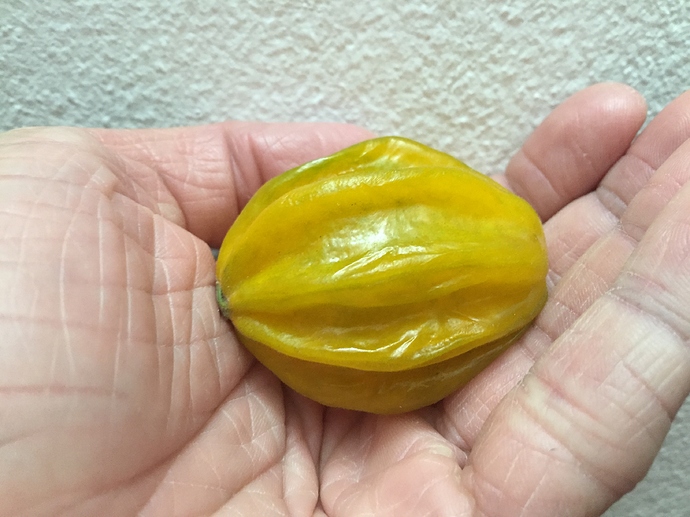 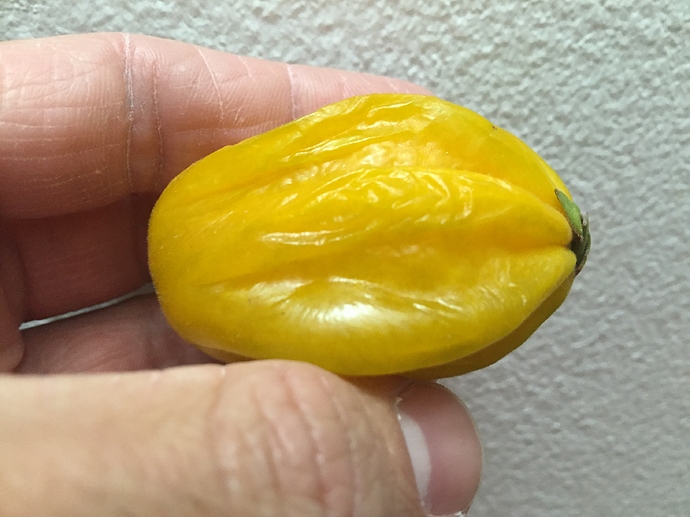 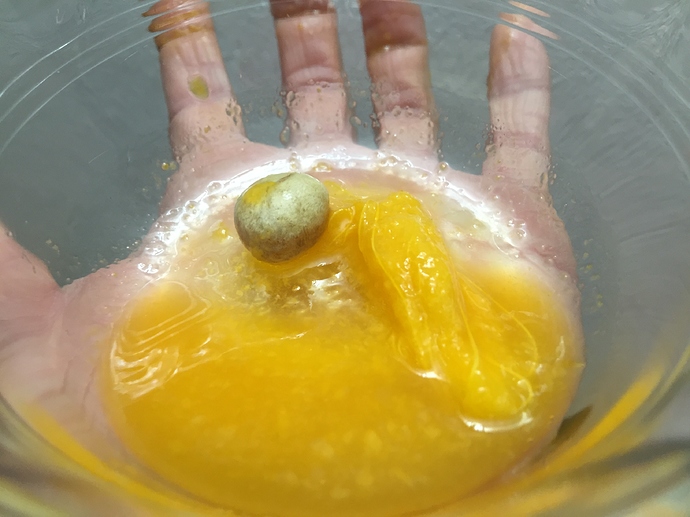 I had bagged it, and it dropped into the bag when ripe. Soft, very juicy, sour (but not extremely so). Nothing like Starfruit, it was much more flavorful. The vaguest hints of Citrus and Passionfruit, but not quite. Most of all, it reminded me of Pitanga (E. uniflora), but without the strange, resinous note. I liked it!

I have pitangatuba too… i love them! Regarding the two gynura species i love to eat them and both are consumed for so many years by humans with no problem described and many health benefits.

I have gynura procumbens (longevity/cholesterol spinach) and have consumed quite a lot of it over the past couple years. Its a good green and easy to keep going from year to year.

I’ve never tried it cooked. Do you just saute in oil/butter or have any further suggestions?

Hi! I eat both species raw… but i’m shure they are great in soups for example.

As long as you keep an eye on your liver function during your medical checkups, I see no issue with it. Lots of people eat Gynura without trouble, so it’s probably not that big a deal. I’m just overly cautious myself.

Maby I’m a bit crazy but i love to eat them…
I will start with another unusual vegetable, gotu kola leaves juice. I read it’s really amazing…

I have gotu kola. Can you eat it as a green as well? Or tea? Thsnks, D

Hi! I read that you can make juice, eat as salad or cook. I will eat it all this ways.