What varieties are your most fireblight resistant apples and pears?

This post is intended to help us all make better disease resistant choices in selecting varieties for planting in our area. I realize that there are many factors that go into what causes fireblight and any other contributions are welcome. Most people starting out growing fruit in my opinion can get overwhelmed with everything that goes into growing fruit so I’m mostly just trying to keep it simple on a topic. Fireblight really isn’t simple but at least I think it is a good place to start. Any and all comments are welcome even if it is that I’m a dummy for thinking about this topic is this simple. My long term experience is mostly with pears so that is what I’m posting. I added several more varieties this year with anticipation that these will also be resistant.

Apples:
-I’m not listing any because my experience is limited

my zone is 7b, west central Georgia
Apples I’ve grown are Goldrush, King David, Pink Lady, Liberty, unknown heirloom maybe Mammoth Blacktwig, another unknown heirloom, and Grimes Golden. Enterprise has never had any, and this is it’s sixth year. King David and the two heirlooms have both been struck many times. Too early to tell for the others. BTW, Enterprise always sets a decent crop, and its flavor is good. It does have thicker than usual skin, though.

Too early to tell for the others

I added several apple scions that I expect to be fireblight resistant but I just haven’t had them long enough to make any recommendation but I’m sure others have and can add to the list.

My Liberty appears to be quite resistant and I suspect that it hasn’t been serious challenged yet, although I’ve had it for 15+ years; none of the apples I’ve grafted to it have been touched either. The only thing that it ever seems to get is a little powdery mildew.

Mark. Liberty appears to be a very hardy apple and I hope to at least get a couple next year. The scions you sent me are growing well. I have one designated tree for the Liberty and several others of it’s scions grafted around my orchard. I have had a great grafting year and all the scions sent to me by you and others has taken. Thanks again, Bill

Bill,
Your suggestion is a good one and will benefit a lot of people. If you don’t mind, I’d to suggest we add the zones and the states where the trees are grown as we know a location is one of the factors. I also included the number of years my trees were planted. You never know when fire blight will show up.

For me, the following trees are fire blight free for now.

If you don’t mind, I’d to suggest we add the zones and the states

My zone is 7b, Alabama

Good to hear. My Hood should have a few blooms next year.

Dallas, Texas 8a
Pears: Dabney,Magness, Ayers and Moonglow for top quality. I’mwaiting to hear how the Harrow pears will do here I suspect well most years. Can’t comment on Apples.

Here in Dallas my #1 choices are

Great, I have both. Thanks

Out of my 40 or so apple varieties Goldrush, Sundance and Williams Pride have been tops for me in FB resistance. I recommend these 3 to a friend new to growing apples, they are grower friendly and have provided me clean, fine tasting apples.

Several post have reference the Goldrush and Williams Pride as being FB resistance but for some reason I have not even considered Sundance. Looks like a really good choice. Below is a clipping form Orange Pippin Fruit Trees about Sundance.

Just finished walking through the Apple orchard and flagging all the trees with Fireblight Cankers that need to be removed. Some cankers are from last year and some may be from a previous year. My big FB outbreak occurred 3 years ago and I have worked hard to get it under control ever since. Every canker is a source of infection next year and even just 1 canker may contain enough bacteria to infect about an acre of apples. Stark Grand Gala was the worst and I will probably remove those trees. The 2 other Gala varieties were pretty clean. 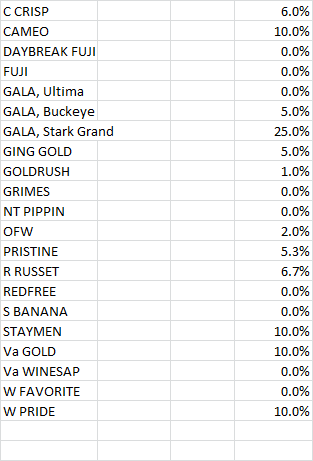 My grimes golden has been hit with over 50 strikes of fireblight (or possibly a combination of fireblight and blossom blast). I’m pruning daily. Goldrush has also been hit multiple times. Enterprise continues on with no strikes. Pink lady, liberty, Arkansas black, and two unknown heirlooms show no strikes so far.

Wow. Pink Lady is kicking butt for you down there. Impressive.