What vegetables do you plant the earliest?

The question I always find myself pondering is what vegetables do I plant the earliest? Typically I would plant potatoes on March 17 St. Patrick’s Day 2019 which is a Sunday, and lettuce , spinach, turnips, mustard, collards, cabbage, carrots etc. very early in april or late March. I’m questioning my past decisions and believe I could actually be planting earlier lettuce in February around the same time as maple sap starts or earlier but what are your thoughts? Lettuce survives 10 degrees with no problems so I’m suspecting I’ve been missing some good green harvests. When we grow lettuce the Kansas sun makes it bitter quickly so once the 80 degree days get here the greens growing is over. We use the cut and come again approach to growing lettuce and get as many cuttings as possible ( potentially 4+ cuttings from the same plant) before it gets bitter. We harvest greens the last time around april 14th or may 1st and plant tomatoes or peppers. Many people are using a cloche, hoop house, greenhouse, cold frame etc. to grow lettuce (below are a few photos from amazon items). What are you doing and why? 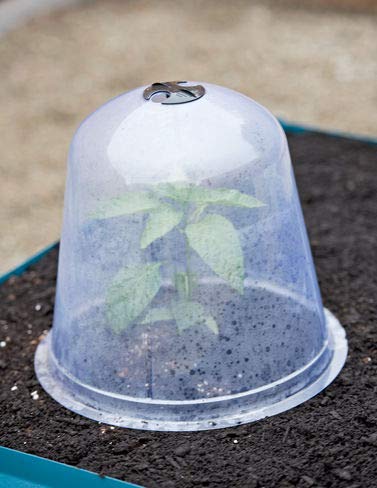 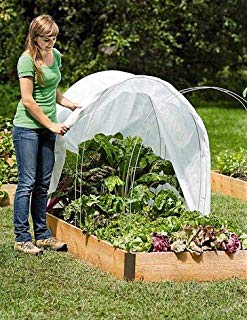 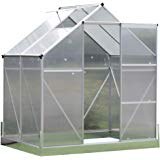 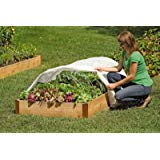 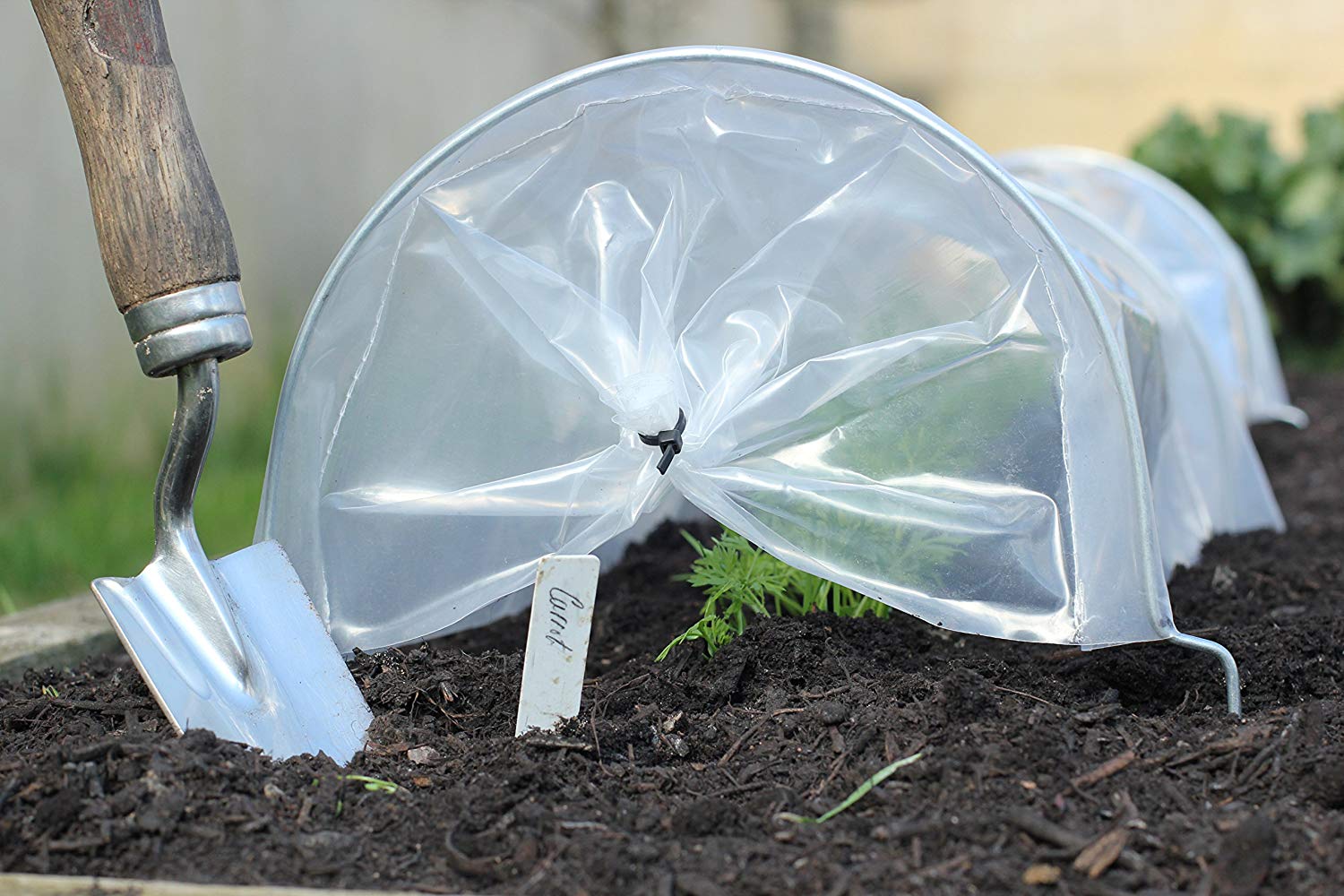 I find that using a row cover invites slugs

Yup, onion plants (sown in Jan) would be pretty safe to put out in Mar in my zone. This year I experimented sowing onions in the hoop house to see if they’d produce good xplants. We’ll see.
Cabbage and Brussels Sprouts are also pretty tough (also sown in Jan indoors)

I get in everything I can as soon as the ground is thawed enough to work, maybe middle of April to early May… I buy a few starts of lettuce and spinach just to have them out there while the seeds germinate. Then I keep planting greens every week or so. Warm weather stuff can’t go in until late May but occasionally it would have been OK earlier, and sometimes I have to wait until June.

I quit starting plants because we just don’t have the space for it, and when I was working I was short on time. Might be fun to start again, but retirement seems to keep me as busy as working did!

peas and arugula too. specially arugula, pops out of the ground at very low temps.

specially arugula, pops out of the ground at very low temps.

Cool, I really like it a lot and the home grown is better than the store bought. On lettuce, I never seem to get it right. The store bought is better. I was thinking of planting arugula early. I’m also having a hard time growing broccoli and cauliflower for winter crops. I did harvest some after freezing temps, it wasn’t very good, but the plant seems immune to even freezing. I did put a cold frame over it, that helped a lot. Seems best though to plant early spring. So going to try again, also I want to try Broccolo too.

I let the arugula flower and collected seeds. Easy and only needed a few stems to have plenty of seed.

When all the kids moved out, there was ROOM!!! That’s the good news, the bad, hauling flats up and down steps.

On lettuce, I never seem to get it right. The store bought is better.

Tennis ball and Genovese Red are the most reliable for me and everyone likes them but me. I want to grow a nice crisp heading iceburg - which alludes me…still…not giving up. So the store bought organic is the next best thing.

We do all right here with leaf and cos lettuces, and some years we can get a decent bibb. But we have relatively cool weather (usually) and our soil is fairly alkaline. I don’t like iceberg so much anyhow so that’s OK. Spinach is pretty iffy for me, but I had really good luck with mizuna and Lady Murasaki this year. Want to try more “asian” greens. My attempts at rocket (arugula) bolted really quickly. I probably look like I’m flogging this source but here it is again!

Normally, I can plant the following around mid-March:

In theory I should be able to go even a bit earlier than that, but the last three years in a row have had very cold Marches.

This past spring, we got 4 inches of snow about three days after I planted my onion transplants. They were fine, though.

I’ve had very good lettuce some years, but other years, we seem to go from too cold to too hot almost overnight.

now, the problem with arugula is, when we get those 80+ temperatures for a day or two in early april in michigan, it bolts. so the season is very short. The fall planted does not bolt.

Our last frost date here is around April 20. I’ve had some success direct seeding peas, radishes and spinach into raised beds in late March. That being said I’m not sure how much benefit there is to doing it that early vs a week or two before LFD because it seems like with the low temperatures growth/metabolism is slowed to a crawl and things seeded 4 weeks before LFD vs things seeded 2 weeks before LFD seem to mature at about the same time. I would say that seeding too early creates more of a risk in my climate because if the ground stays wet too long - even in raised beds - the risk of root rot becomes a big problem.

If I was going to seed more than 2 weeks before LFD I would strongly consider building a temporary low-tunnel to better control the growing environment… not sure if it would we be worth the added effort though unless you have very long rows.

I hold off on the peas if the ground is cold and wet [as it always is]. Experience has shown me that no matter when I plant them, they will always set fruit at the same time; the later plantings just catch up to the earlier ones and are more vigorous.

Generally, for early planting, I do transplants, not seeds. Peas and spinach are exceptions.

Lettuce transplants really well. I do grow iceberg types and usually get them to head. Iceberg has gotten a bad rep because the supermarkets strip off the green leaves, down to a white ball. I appreciate it now that I grow it.

the fall planted does not bolt.

Mine did this year without even getting one harvest. It is the only time I tried fall planting it. I always planted in the spring and get 3 or 4 harvests before bolting. I guess I will try again a little later in the year. Yeah yesterday I took the seed pods I let dry since summer and harvested a hundred seeds or so. I was worried I didn’t keep enough seed pods, but they were all loaded and I only harvested about 10% of them.
Thanks for letting me know it can work in the fall. With this experience I was going to give up on fall planting as they bolted so quickly and it was very late in the year too. Maybe it’s varietal? I have three different ones, I can’t remember which cultivar I used?

The fall planted does not bolt.

I’ve had the same results with cilantro - I’ve grown it all winter in an unheated (and actually well-vented) hoophouse. I’m experimenting now with dill. So far so good. Been harvesting shoots & drying. Cilantro goes into a pesto.

Well for cool season crops ,I try to start in the fall, so I am not sure if this is “early planting” ----“or late”?
Planting greens etc.every 2 weeks / every month ? Starting in fall , until late spring ,seams to work the best.
Every year is different. With wildly different temperatures from one year to the next , it’s hard to tell when " the best time to plant " is .? ?
By planting a little each month , I try to hedge the odds.
One of them usually does really good. With other plantings befor or after to extend the season.
Many years dime size lettuce going into winter is the first I pick in spring.
Other years it dies, and later plantings do better
It’s hard to guess what the weather will do ?
So I just keep planting----- a little at a time…

I want to grow a nice crisp heading iceburg - which alludes me…still…not giving up.

Thanks. I had trouble with that forming a head too. Well, it formed this distorted looking bunch of leaves. I’ll have to keep trying it.

It was a rough year here, it rained about half of the days through summer and must have been cloudy for more than a quarter of the rest so the lettuce didn’t grow much and got all sorts of diseases by fall, and then there were short periods of sunny hot weather that stressed it out more. I grew Cardinale for the first time and it seemed to do as good or better than the rest with heat and disease, I didn’t try to grow any heads but it is also a crisphead.