What would you do with this Misty Blueberry?

First, I neglected this a bit by not staying on top of the ph. I measured a couple of days ago and found it around neutral.

That said, I have nine including three other southern highbushes. While I have one Pink Lemonade that is struggling a bit, even it is not nearly as bad as this one.

The tree was looking fine coming out of winter. I fed it some MicroLife Hybrid 20-0-5 (label below), 1/4c around Valentine’s day but it never really improved. Instead small branches would begin to die back.

A couple of weeks ago I had given it a half dosage of Miracid. That only seemed to speed up the issues. But, again, only on this plant. I’ve treated all of my bushes the same. Only this one looks like this. 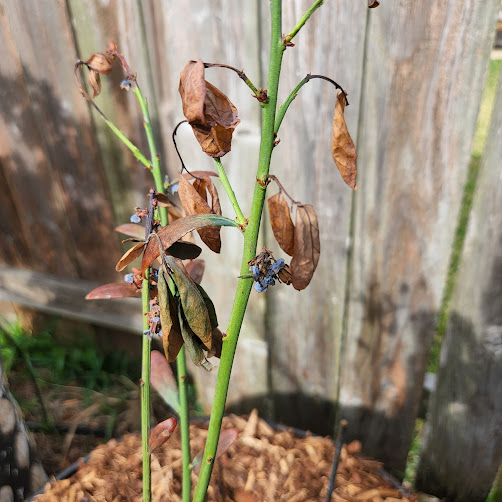 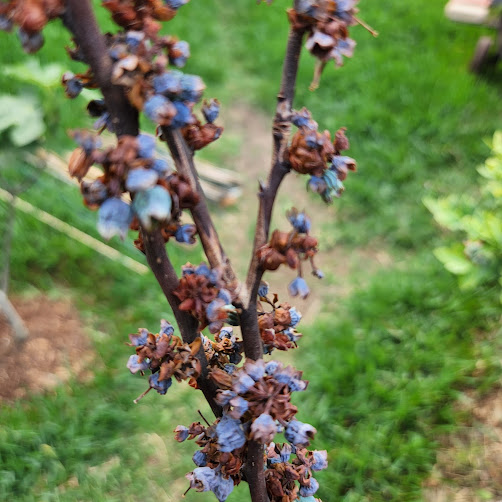 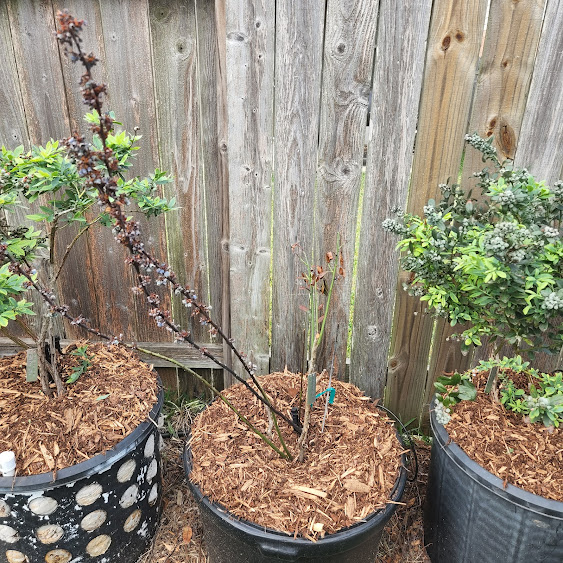 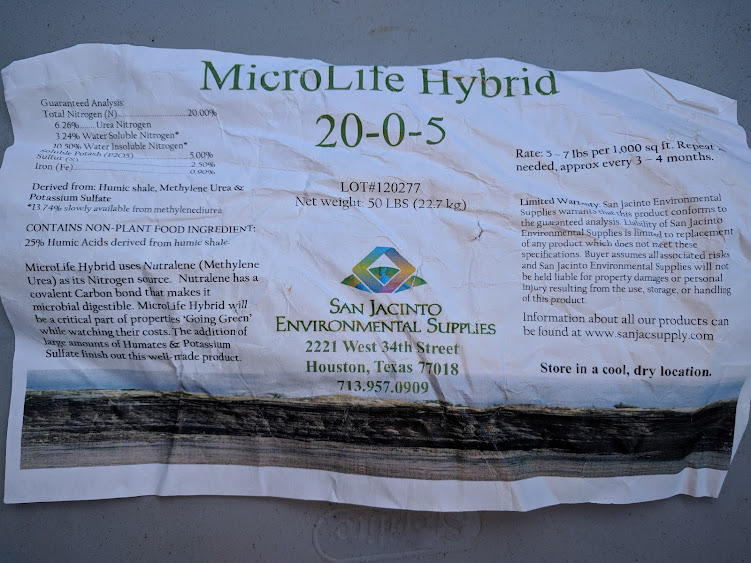 The nitrogen source which is new to me. I do know blueberries can only use Ammonium or urea sourced nitrogen. So not sure what this nitrogen source is? Nitrate forms can kill blueberries. They can handle small amounts only, normal amounts can kill plants. But I suspect it may be something else or all your plants would be like this. It looks burned though. I doubt this plant will recover, but I would try.
Don’t feed it anymore until it recovers, if it recovers? I would flush soil with excessive water. Try to get the fertilizer out. Unless it’s been wet for a long time as that could cause this too.

So, the Misty blueberry above has died. I kept pruning off dead stems several inches below the discoloration until there was just nothing left.

Now, my other Misty and a Sunshine Blue are struggling. It seems like I have a situation that continues to spiral out of control. So, before I lose any more blueberries I’m reaching out the community again. 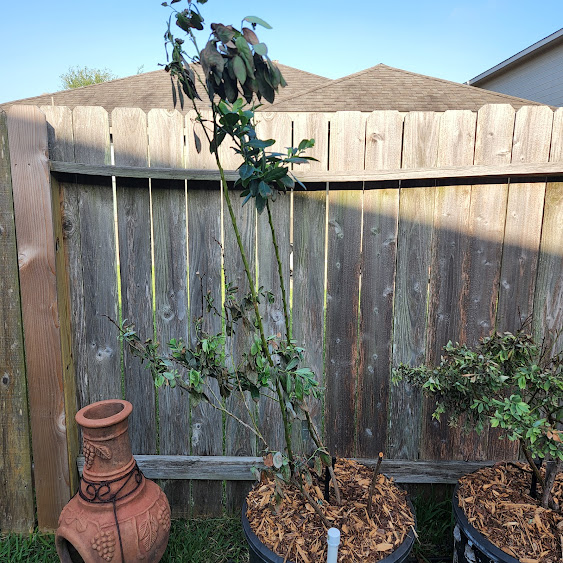 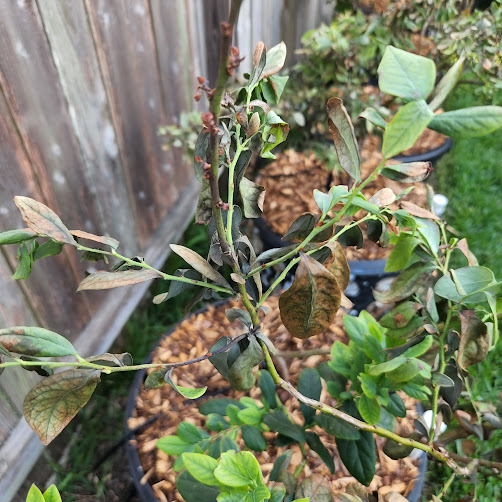 The two pictures above are from my second Misty. This, too, did have issues similar to the first Misty in the original post. But I have not noticed any additional “discoloration” since a severe pruning on May 5.

The second pictures shows the new condition which I think is possible drought stress. I’ve been watering them every three days during a recent heat wave (temps in mid 90’s). This is what I did last year, though, and I did not have this issue. 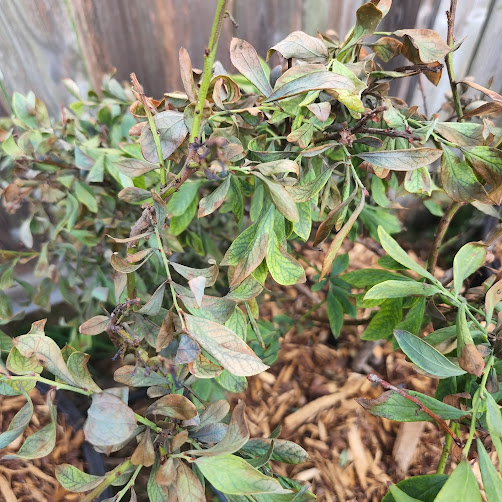 The picture above is of my Sunshine Blue. Again, looks like drought stress but they’ve been watered pretty regularly. 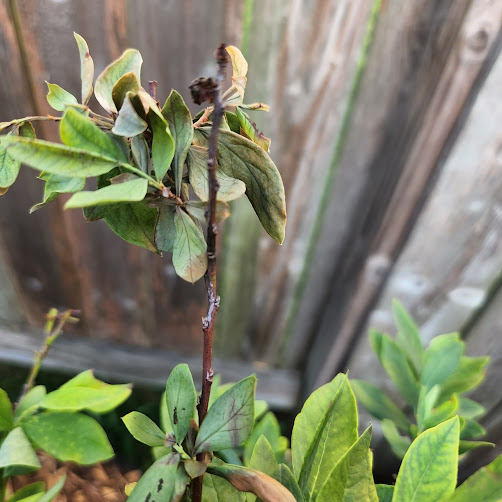 Same bush; perhaps a sign of the same issue of the original Misty but I honestly don’t know anymore.

Both of these bushes were fed the MicroLife Hybrid 20-0-5 from the original post on April 23. On April 29 they, along with all other blueberry bushes, were given ammonium sulfate at a rate of 1/2tsp per gallon. I recently removed all berries so the plants can put resources into stem/vegetation growth.

I’m desperate to save this Misty as it is my last one. I did attempt to root cuttings but they are all browning and I’m assuming none will take.

I have one more Sunshine Blue in good condition along with five rabbit eye varieties. All appear at the moment to be healthy. But, whatever is going on appears to be slowly moving from tree to tree. So, perhaps it’s some bacterial infection? I clean my gear after each cut with 70% iso alcohol. I try to be sanitary.

I have considered down potting both plants, as well, thinking it may be easier to control. But, maybe that would stress it out more?

What would you do from this point?

Do the leaves look like they are dying from the outside edges first?That could be Leaf Scorch.
There is some possible chlorosis going on.What is the potting soil made up of?Also,the pH of it and the irrigation water?

for a proper post mortem take a look at the root ball. Most bushes I have seen die like that had a mat of roots that never managed to branch out. One particular blueberry was planted in the most perfect and fluffiest of potting soils; it died in the third year and when I pulled the plant what came out was still the exact same shape as the pot it came in.

All bushes are in a 4:2:1 mix of peat, pine bark fines (from Landscapers Pride), and perlite. I did forget to mention a couple weeks ago I gave them a half cup of Espoma soil acidifier. Last year they got a full cup. I’ll be adding another half cup Fri.

They all have at least 3 inches of pine bark mulch.

They are watered with rain water which is neutral.

The soil acidity, I’ve been trying to figure this out better. According to my last test they’re all neutral. But the water collected from the bottom of the pots (they’re all SIPs) is very acidic; around 4.5.

It does seem the dying is from the outside first. But this is only on the Misty and Sunshine Blue. The second sunshine blue, along with my Climaxes and Pink Lemonades all appear fine and healthy (again, for now). And they are all given equal treatment.

If it matters, the bushes are lined up south to north dog-legging to the east. If bush #1 is the southernmost, then #3 died first, and #1 and #2 are the most recent-impacted. Our winds have been from the south so seems to me that if this were bacterial spreading via air, then #1 and #2 would be fine while anything north of #3 would be struggling. I’m sure that info is helpful to someone smarter than me.

pull the dead bush, look at the roots.

Bush pulled. To me, they seem fine. Some tore off still inside the pot; one pretty decent one (maybe 1/8" thick) stuck inside. I’m not sure what to look for here but they’re definitely not root bound. The soil is damp but not soggy. I can’t even wring any water out.

I fiilled a SOLO cup halfway with soil then added enough rain water to just cover it. Sat for 15 minutes. Using MColorpHast™ Premium pH Strips I tested the rain water at approximately 5.5 and the soil/water combo at 4.4, 4.7. 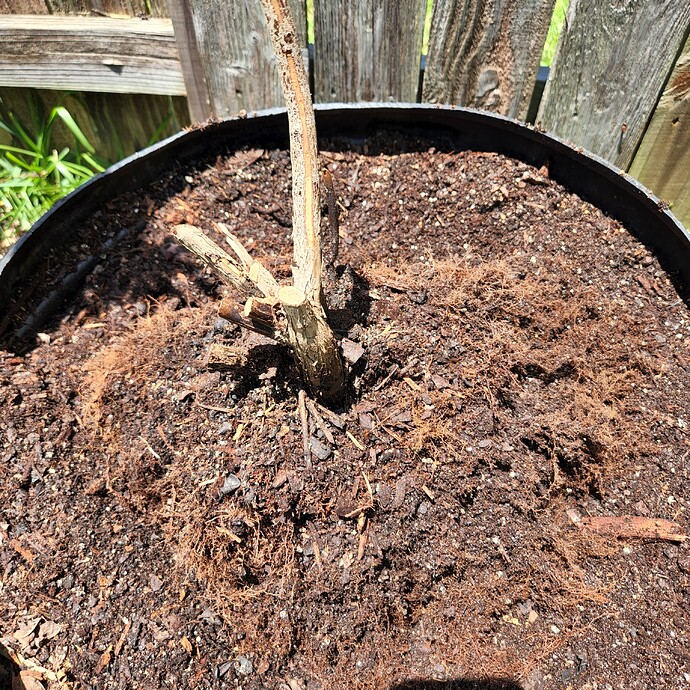 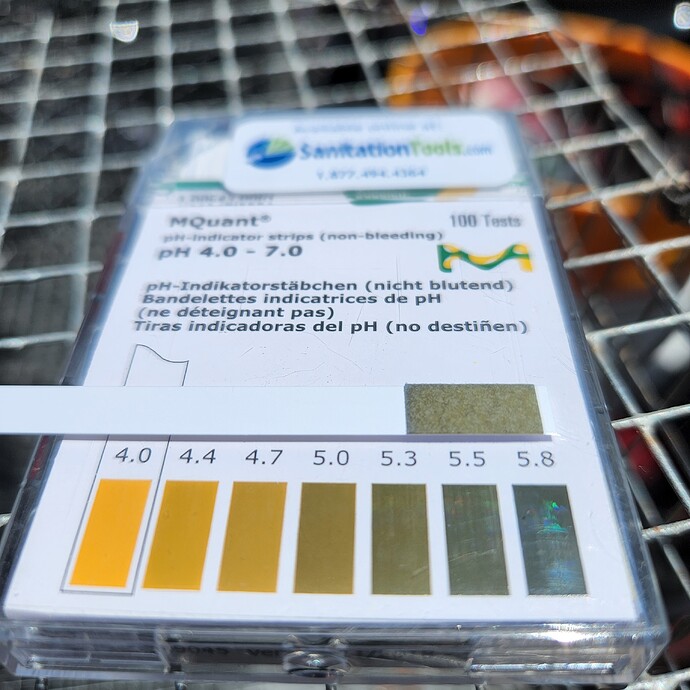 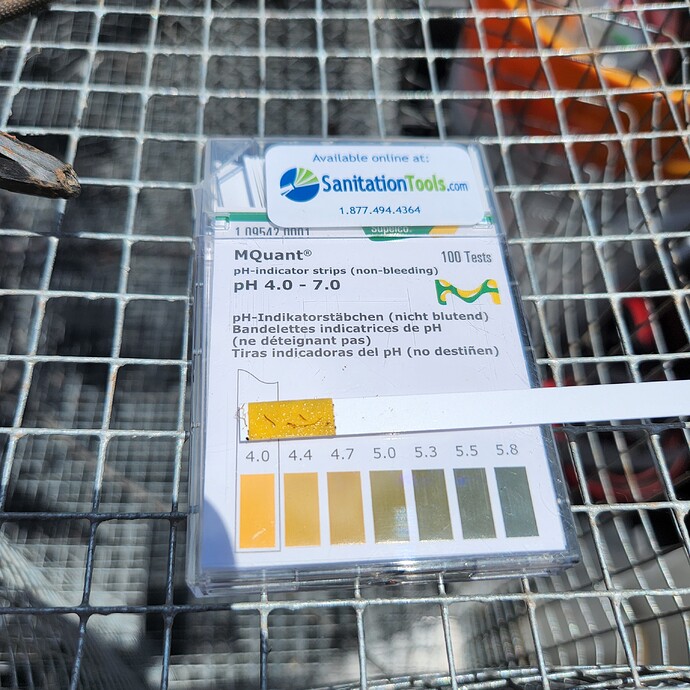 It dawned on me at the beginning of the year I put down pine bark mulch. I used two bags. I don’t recall exactly if the struggling bushes used the same bag. Is it possible I brought in a disease or fungus?

At the moment my four rabbiteyes appear fine. But I am not optimistic it will remain that way.

I almost get the feeling that you might be killing them from too much care.

Your blueberries should be doing okay with just a bit of soil acidification, I use Ammonium Sulfate to both acidify and fertilize and mix in some peat at planting. Otherwise they don’t really get any extra pampering and get watered with drip irrigation along with my tomatoes and other veggies in the row.

Seems like you are using a lot of different fertilizers and maybe not watering enough to keep the soil consistently moist?

I understand what you’re getting at. But I assure you that is not the case. I’ve done very well taking care of these blueberries for the two previous years. I’ve done nothing different I didn’t do last year.

When stems started dying off I’d prune it immediately. Then when that didn’t seem to help I decided to be more patient, see if the dying stems would suck up whatever is going on. But, then it’d just continue to spread.

So, now, yes I am getting more aggressive. Because patience has cost me two plants and potentially two more.

They are watered with rain water which is neutral.

As you found out with your pH test, rain water is almost always acidic. Based on your soil test being below a 5 pH, I’d agree with Dimitri that you are probably killing them by caring too much. I’d recommend watering them thoroughly with tap water (assuming it is a higher pH), and using that to flush out excess acidity and fertilizer. As much as it might seem counter-intuitive, let them do their thing and see what happens, other than maybe another soil pH test in a week or two if you desire.

I bought a few TINY blueberry plants this year and they were looking very rough to start. I think they just needed time to acclimate after being transplanted, but in the last week I noticed they have much greener leaves and look healthier just from me giving them time. I wish you luck, keep us posted on any developments!

Edit: just wanted to emphasize that a pH in the 4s will kill your plants just like having it too high will stress them. That’s why I recommended tap water.

When stems started dying off I’d prune it immediately.

Part of the stem dying is that a small portion should be kept on to protect the remaining living tissue. It might not look as pretty but it’s better for your plant.

The base of all stems are now brown. Scratch test shows there is no green on the two SH’s mentioned above.

Some of the stems are sitll green well above the soil line and, in some cases, up to the tips.

Is there any chance at all these will come back or are they gone for good? Or should I attempt to root cuttings?

All bushes mentioned above now dead and now one of my pink Lemonades is showing symptoms. 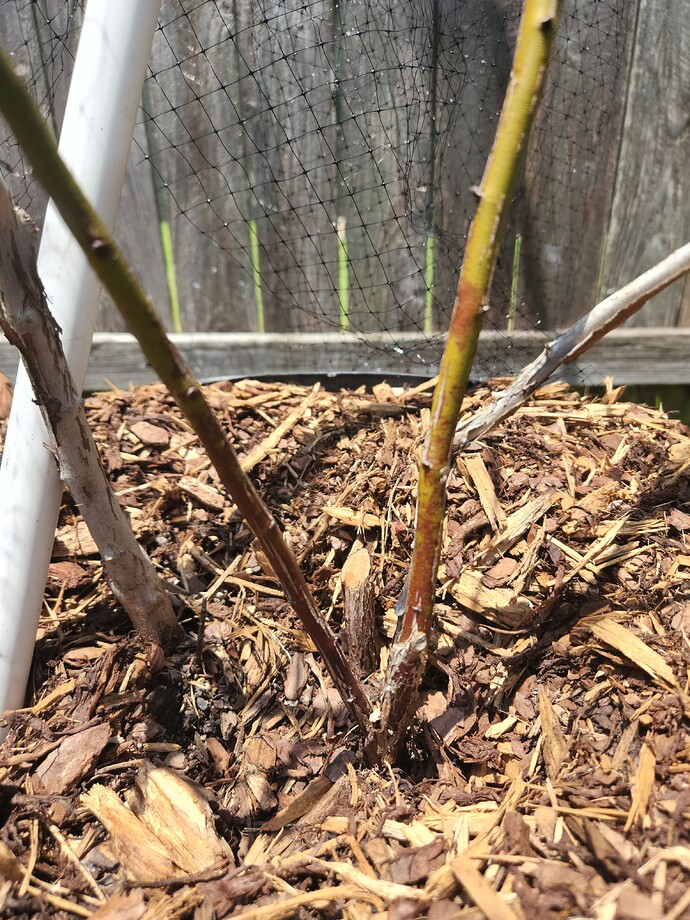 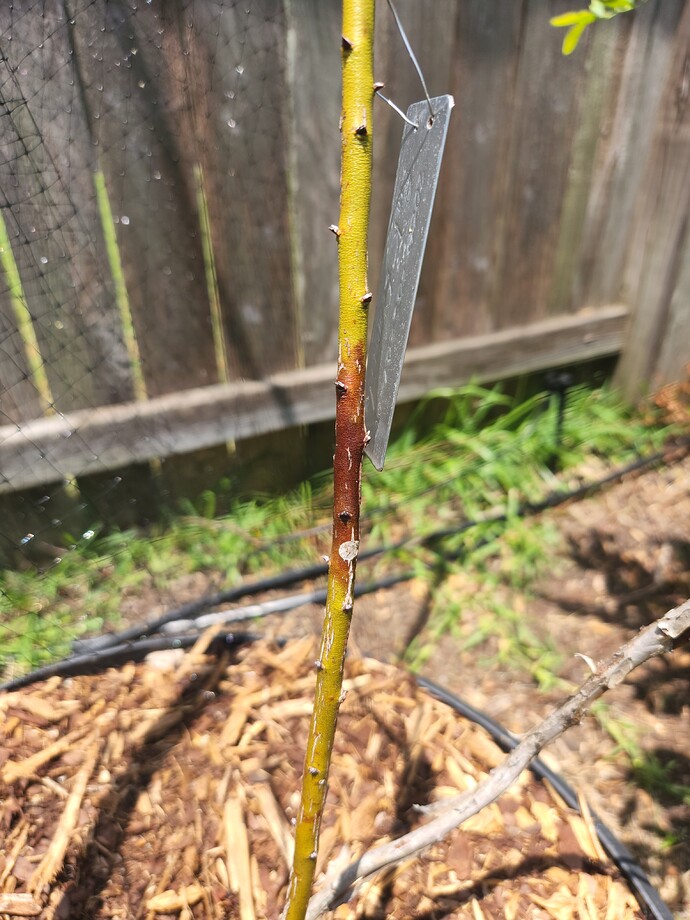 Glad I found this thread. Hi, I grow almost 100 blueberries in containers and every year a handful would die the same as your. They were all in the same great growing condition but yet some would die off out nowhere with no warning……someone has got to have an answer to this phenomenon in blueberries as I am still searching for an answer to this day haaa.

@Natdcfruit
The highbush roots do not like to be dry or wet. They prefer damp (not wet) loamy soil in the root zone and less than that near the surface. A bit of ground redwood bark in the soil is a plus. Also, several cultivars do not respond well to Nitrate nitrogen. Some hybrids (e.g. Monrovia Sunshine Blue) perform just fine with irrigation water in the pH 7+ range but the majority prefer pH 5ish.