I want Tasty Jade, which Johnny’s carried, but they replaced it with Nokya. Except Nokya isn’t in stock yet. I called, and they said they expect it by April, which is OK with me, I’m not planting cukes then.

They have another similar cuke, but it costs like $1/seed. No way.

Outside it is -10 F, but inside Flavor Delight is happy for spring. 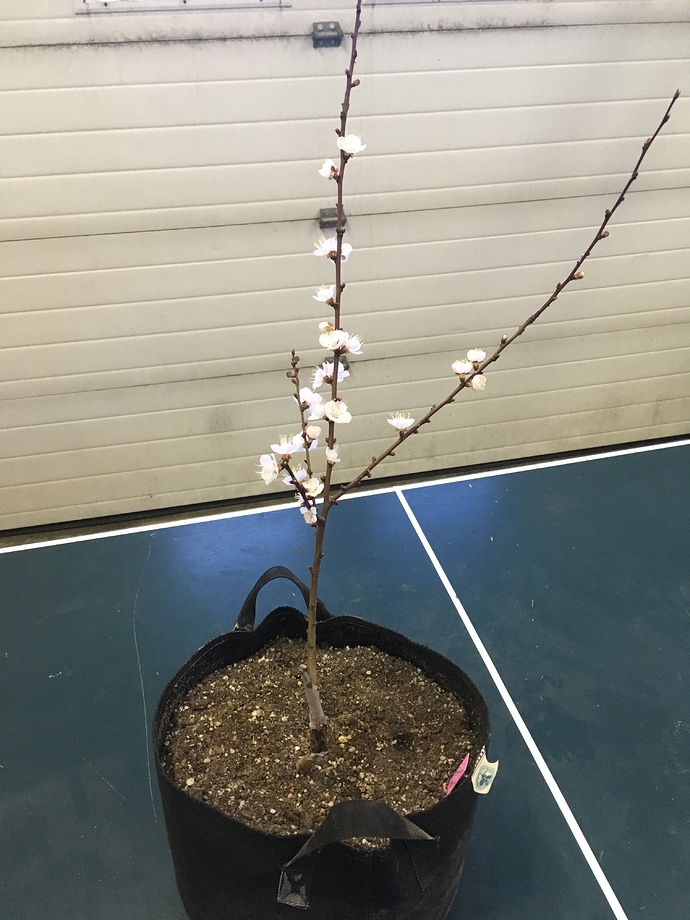 I looked it up online, looks interesting. I found it here: 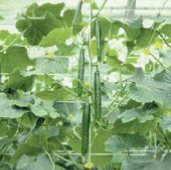 54 days. Cucumis sativus. (F1) Plant produces high yields of glossy 12" long green cucumbers. One of the best Asian cucumbers on the market. Cucumbers are crisp and bitter-free. It is an excellent slicer and perfect for salads and gourmet dishes.

I don’t know how good these sites are, but they do have the seeds in stock.

Received and planted my first—and only trees ordered for this spring. A Santa Rosa Plum and an Indian Free peach. Both are to replace fatalities and Failure to Thrive trees. I got them from Grow Organic and was very impressed with the trees. 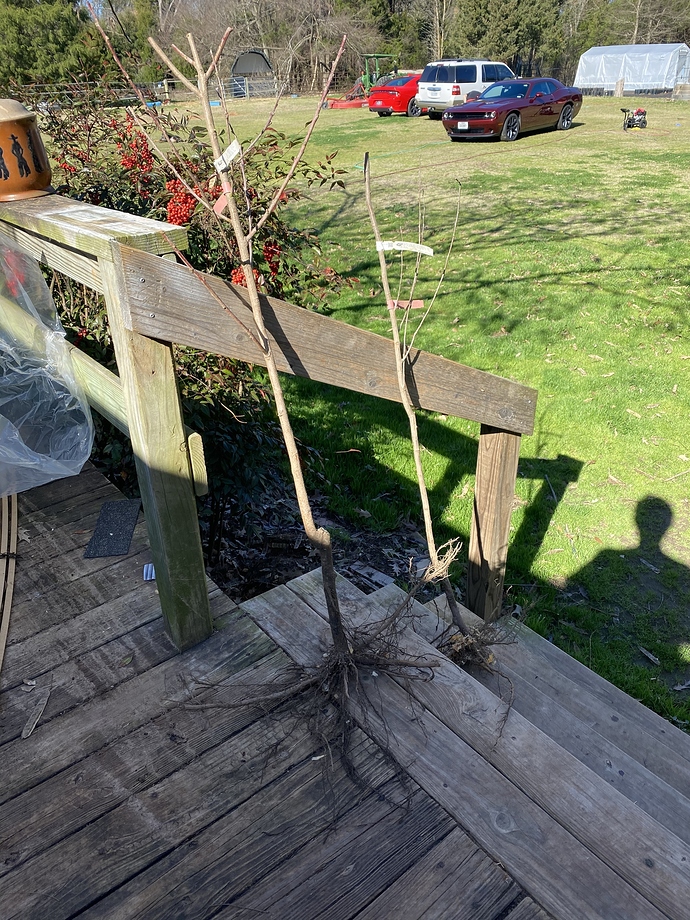 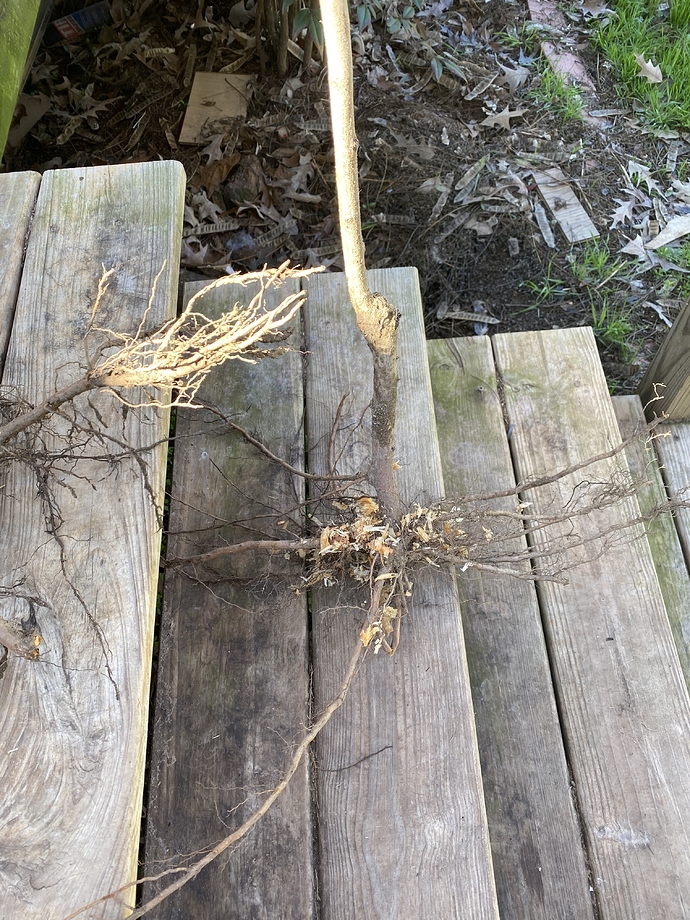 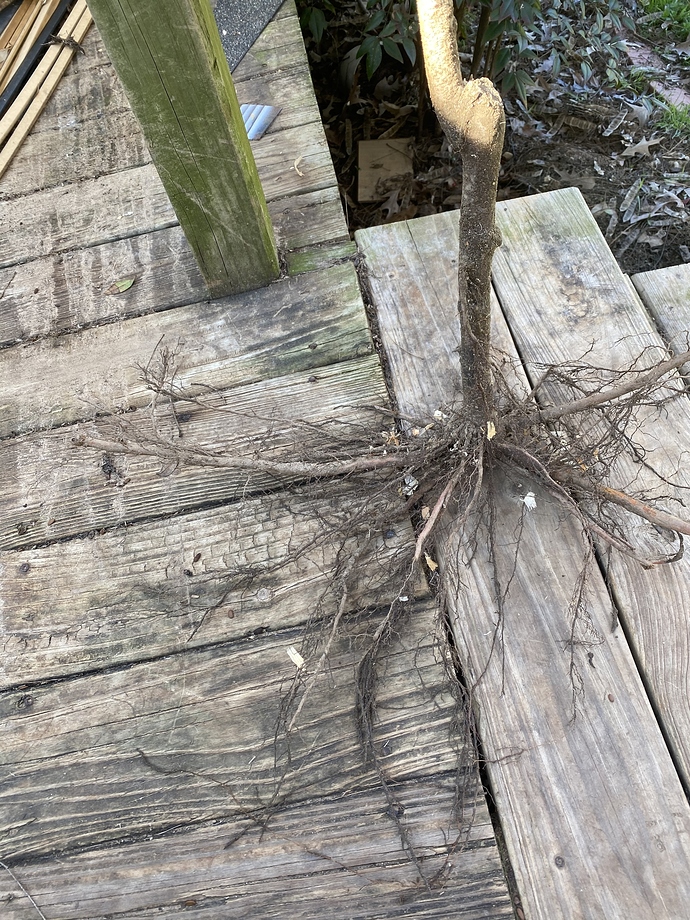 Thanks. It’s a good cuke, I’ve grown it for years. Parthenocarpic.

Johnny’s sez the new one Nokya has more PM resistance.

Glad to see these trees are very strong with nice root system. I also bought a few trees from Grow Organic. But mine got delayed by Fedex. Should be here tomorrow I hope.

Your right. It is Late Santa Rosa. I hope it it through more late frosts than some of them. Maybe…

The roots looked fantastic. The size of the trees are nice too.

Pruned 2 of my figs this weekend. Figured I’d start a few cuttings. Around here, most figs will root if you just look in their direction. Last year they had no problem growing after just being stuck in some dirt outside. Hoping to achieve a bit better growth with a head start indoors. Adriatic JH and St. Rita 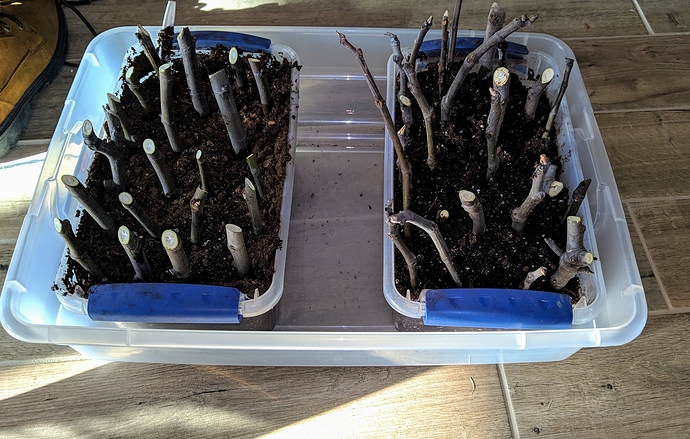 Not much going on so far this year. Pruned my raspberries, blackberries, and elderberries. I moved my Juliet cherry to a different location so make room for my new garden area. It will be big and covered with black plastic for weed control. Went through my seeds last night to see what I need to order this week. Other than that, looking forward to spring and growing some fruit!

What phase of the moon do you plant you set out your tomatoes by?

What phase of the moon do you set out your tomatoes

I try to sow tomato and other above ground crop seeds in the first or second quarter (before the full moon). I also try to sow them during a good sign for such seeds, that is, Scorpio, Cancer or Pisces. These are called the ‘water’ signs and are supposedly more fruitful.

For below ground crops, I try to plant them during the third quarter moon (right after the full moon). I try not to plant anything during the fourth quarter. The best signs for planting root crops are Capricorn, Taurus or Virgo, which are called the ‘earth’ signs.

The theory of planting by the phase of the moon is that during the first two quarters, energy (or gravitational pull of the moon) and water is being pulled up, so that encourages seeds to burst their seed pod and sprout better.

Conversely, during the last two quarters, energy (or moon’s gravity) and water is being pulled down. So, with root crops you want them to start off with them being ‘pulled down’ so that they establish their root type growth. The reason for planting them in an earth sign, is because they do most of their growth underground, or in the earth. Supposedly (not quite sure if I’m explaining this right), you don’t want to plant taters during a water sign or they may have a tendency to rot. My grandmother claimed that if you planted something like carrots or radishes during the waxing moon, you’d get more above ground green growth, and not so much root growth.

Now, to directly answer your question about setting out seedlings. Since the tomato seed has sprouted and grown into a plant, you’d want to help it establish a good root system when it is set in the garden. So, because you want good root growth, transplanting in the third or fourth quarter would be best. The better sign would be an earth sign, but a water sign would be okay. I’m not as picky when transplanting, but it prob would be best done in the 3rd and 4th quarters.

There are the ‘fire’ signs, in which you don’t want to plant anything, as they are more barren. During this time, it’s better to cultivate or weed, so as to help prevent weed growth. Also, a good sign to harvest crops (or fruit), as it supposedly helps delay rotting a bit.

There are also ‘air’ signs, which aren’t as barren, but aren’t ideal for sowing or transplanting. Flowers tend to do better sown during these signs, in the first two quarters.

Ok, now you know my methods (or madness). Just call me hippie earth boy. Guess I got it from my grandma. I don’t follow it to a T, but do try to plant and transplant in the correct half of the moon.

Here is a site that explains it better than I can, there are others if you want to look them up.

Moon Phase Gardening | Planting by the Phases of the Moon

2020 Moon Phase Planting Guide. Planting by the phases of the moon is an idea as old as agriculture, popular in folklore and superstition, but there are scientific ideas to back it up.

You can get almanacs that show what sign the moon is in. You can also get some calendars that will show the signs and moon phases.

I was going to spread more mulch today with my day off, but it’s snowing. I’ll have to just enjoy the sights and scenes. 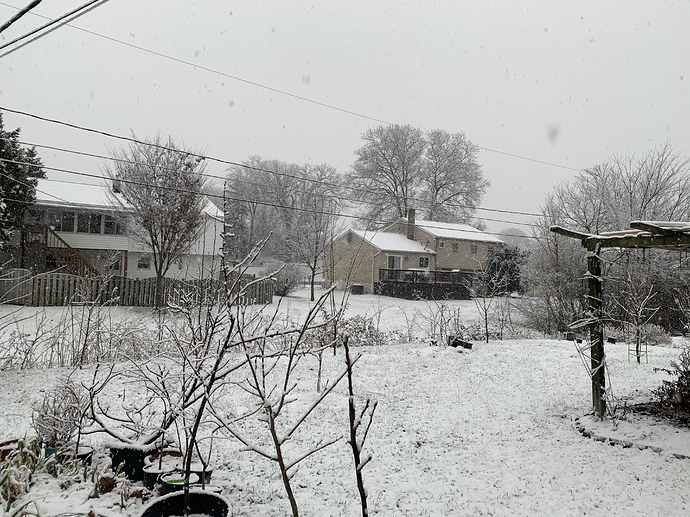 It is Sunny here in Omaha. We may get some snow this late Friday.

I’m in NC and I just received an order of bare root trees from www.thetreestore.com and I must say I am impressed. The trees are small but All the trees look well cared for and alive. I’ll have to order from this place again. 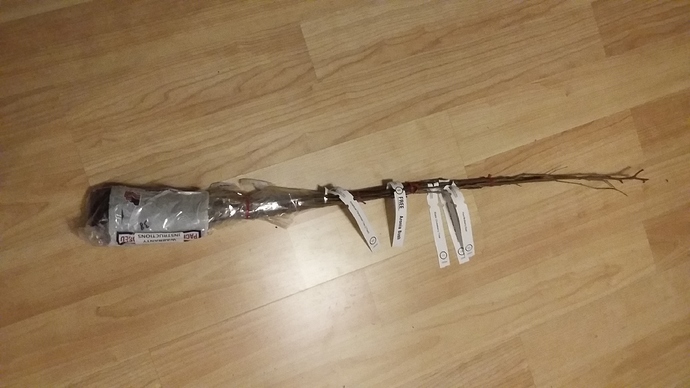 Glad that this winter has been warm. Will see 70F this week. I will put these little guys in the ground this weekend.

I’ve used The Tree Store before and got good plants.

My only issue is that they don’t have a larger selection of fruiting plants.

I got my tree now. I have to agree with you. The roots of these trees are fantastic. Look forward to a nice start.

Today was the regular Wednesday market in the center of town. These were the apples out today. They are changing all of the time. 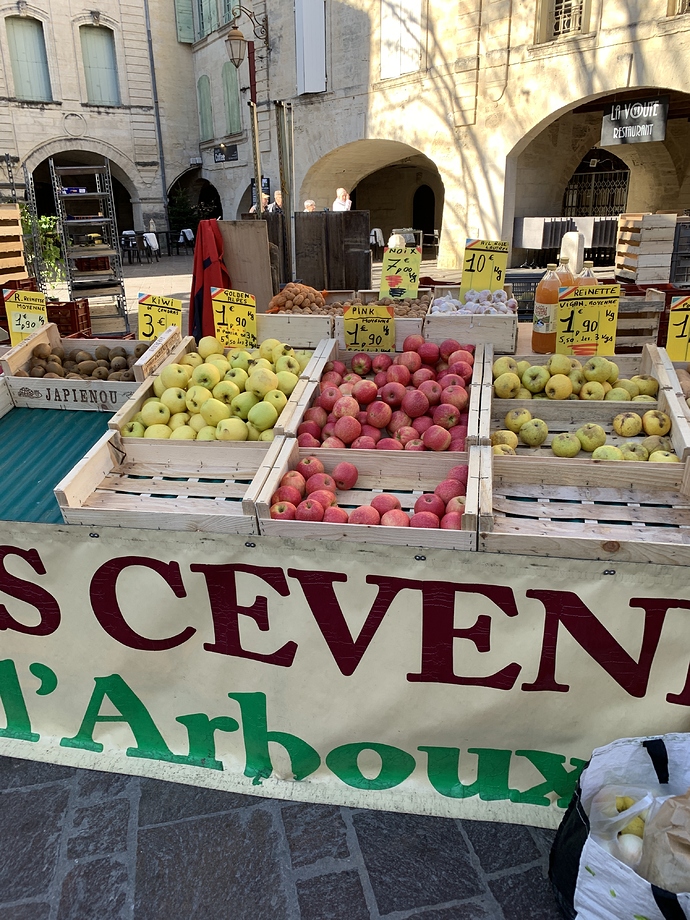 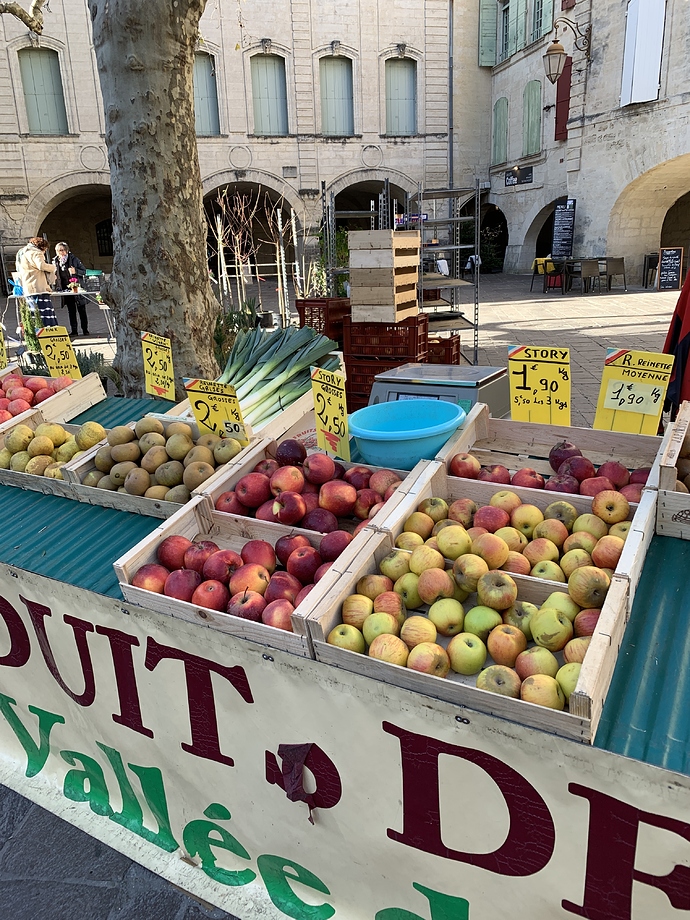 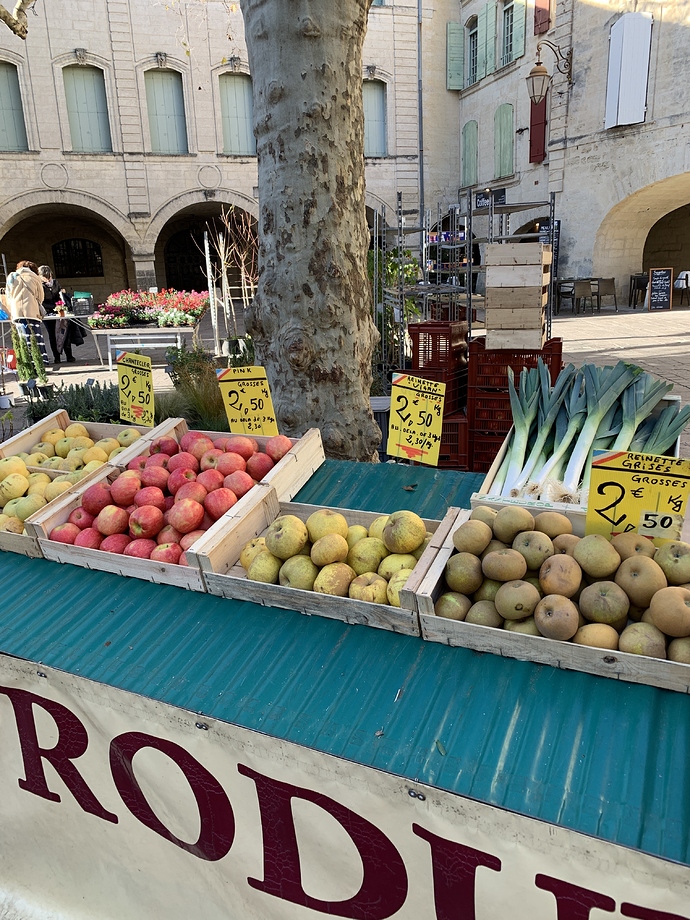 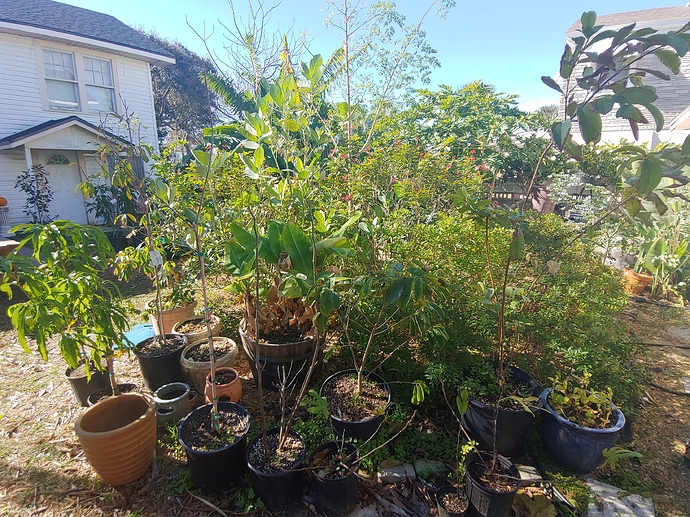 20200107_110751_HDR.jpg3292×2469 4.8 MB
I took the plunge and cleared out my overgrown perennial bed!! This spot gets probably the best sunlight in the yard and I couldn’t resist making room for edibles. Transplanted the thryallis and jatropha the best I could no sign of a freeze here in the near future(I know I am fortunate but we pay our dues in summer) so hopefully most will make it, was not too attached anyway. A good chunk of two days later after a lot of weeding, raking, aerating, and adding compost as well as raised bed soil I have myself a new bed!!! I was running out of space because I made the rookie mistake of underestimating the size of my bananas and papayas which have taken my yard over (they are producing so there are far worse problems to have)! I plan on planting annuals here near the end of February although I do have some potted fruit trees that need a home. I ended up with a lot more space than I thought I could manage so I am thrilled! Check it out! 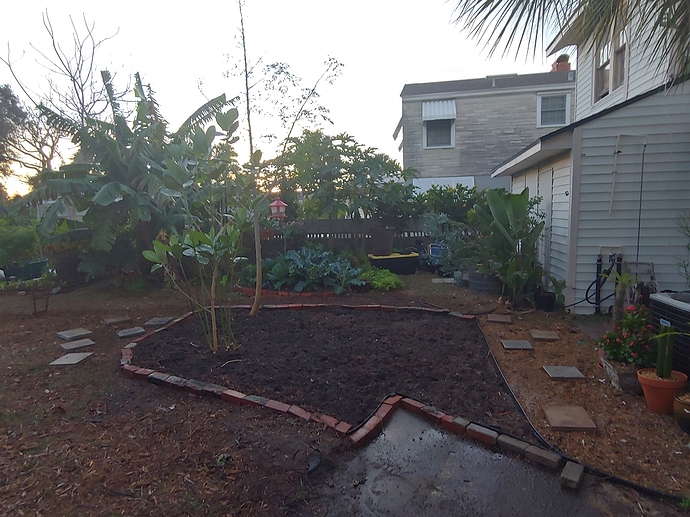 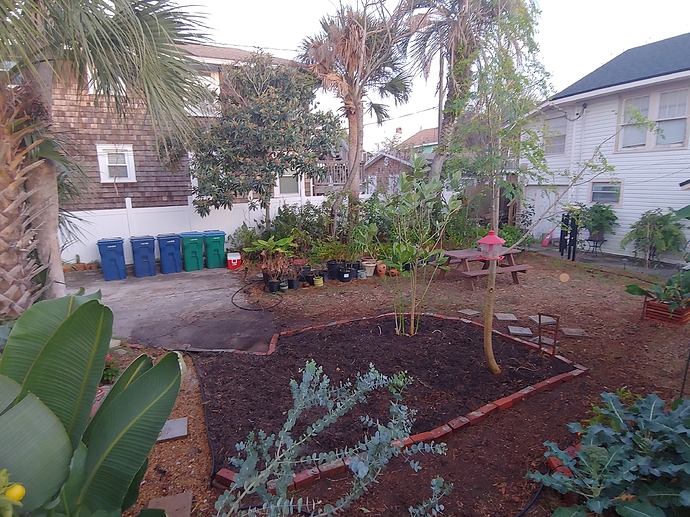