Yup best I can! Make my own compost only buy natural fertilizers. Only really have pest problems in the spring and only thing I spray with is soapy water and neem oil occasionally.

Preparing holes for the mulberries I ordered. This is about a day and a half or so after some heavy rains. Glorious, black clay. This is why every tree I have must start out on a mound. This area is just a bit lower than the rest. I’m wondering if one of the mulberry trees could even withstand this site even with the mound. 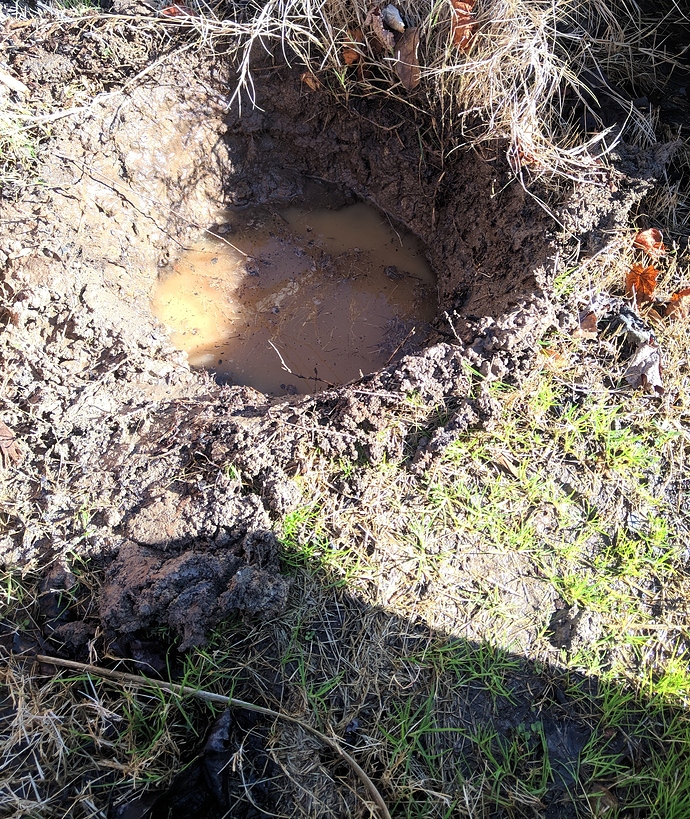 I took a potted Australian Finger Lime and put it into the ground today. It was really struggling - it seemed to burn in our afternoon sun, so I put it in a shadier spot, but it never really thrived. Hopefully in ground the conditions will be better for it. It’s now in a corner that will be partially shaded in the summer from a pine and a nearby fig, but will get more sun in the winter while the fig has shed all its leaves.

Well that didn’t get any better. 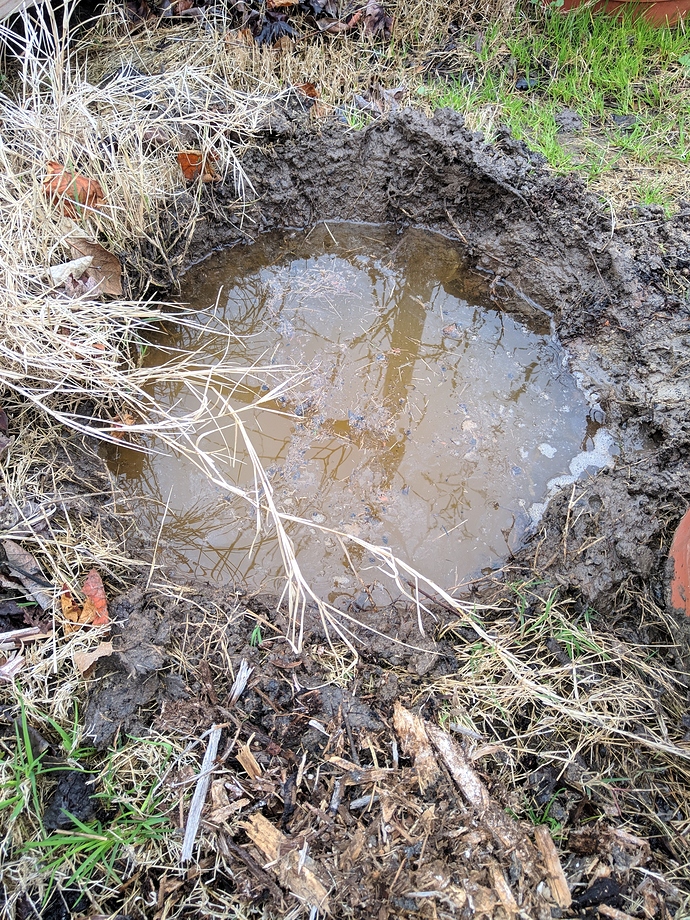 Looks like you may need to raise it up.

I think I may have to throw it some floaties if the water stays this high!

Might as well throw some fish in there and call it a day. 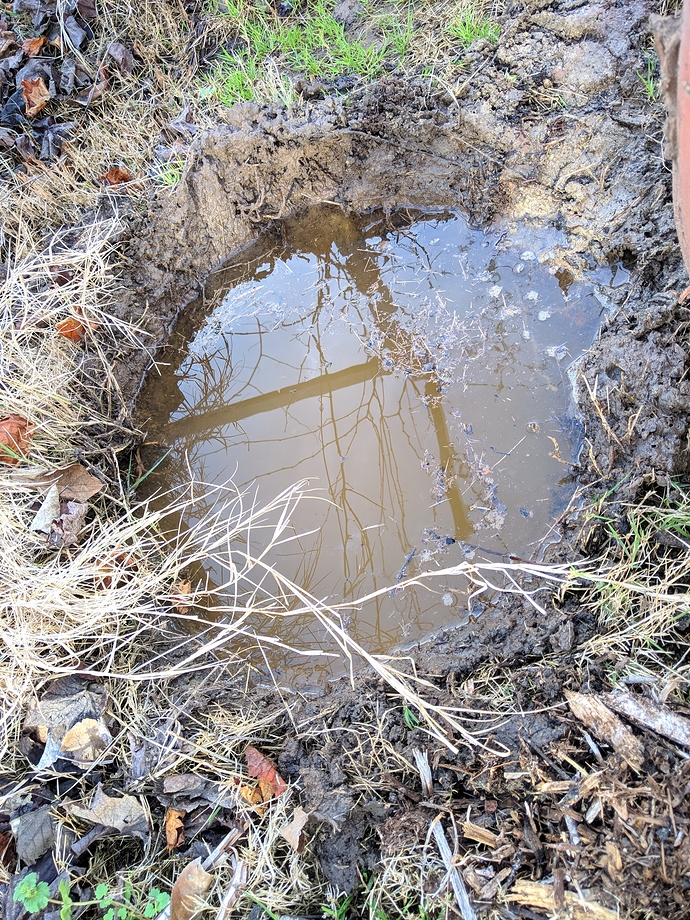 Rooting a few Valdosta and White Pakistan mulberries. First time trying this method of rooting. I usually just use Solo cups, but I’m out. I’m used to rooting figs and pomegranates, so no idea how well these suckers will do. Needed to prune the trees and hated to throw away good cuttings. 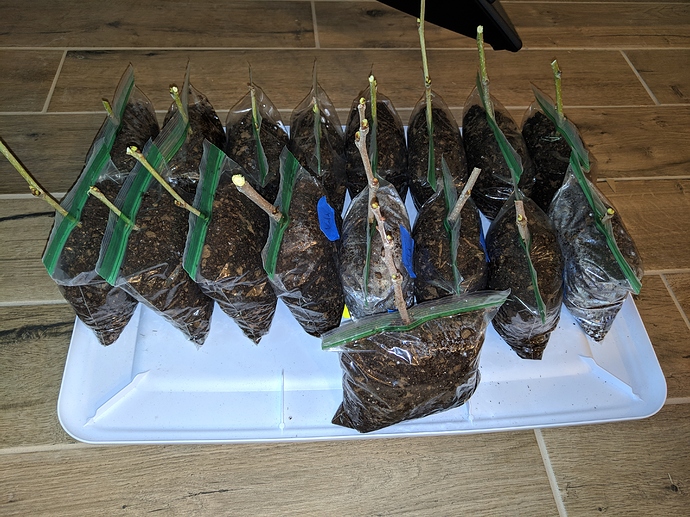 Chad, you may have to try Lotus in there, at least the seeds are edible! Can’t laugh, I have the same soil in places.

Crazy weather, was pulling weeds and cutting out a Wisteria today since it was around 60, and had the first Bumblebee out flying, it’s way too early. Hope it found cover, down to low 20’s tonight.

Ah yes, good ole North Texas black gumbo soil, very familiar with that. Not good for growing things or house foundations. But you did say your Freedom blackberries have done well?

Here, I 've got to find a place to put 6 potted apple trees, got a few possibilities. I may have to put them in an place that I renovated as a garden plot: applied about 200lb of lime, lots of fertilizer over the last couple years. The problem is, it also tends to have standing water during rainy periods. So I’m thinking of plowing it up, then mounding up two rows for the trees.

Last week I cleared out a fence row where weeds and wild blackberry canes had taken over. Took down some barbed wire fencing and T-posts.

Also weeded out an area next to it that has some grape vines still alive. My next project is to rebuild the shoddy grape arbor my wife built a couple years ago that has since collapsed, and try to re-route the vines.

I was considering maybe ordering some new vines for that area. I was also considering getting some currant plants to put in that cleared out fence row. I think it would be a good area, since it would be in the shade of a big old apple tree most of the day. I’ve heard currants do well in shady areas.

Oh yeah. Those blackberries made me gallons upon gallons last year. I amended the clay with a bunch of compost. They’ve taken off for sure. I’ll pull them up the day I find a seedless blackberry though! This clay eats mulch each year. Slowly improving it bit by bit.

It’s going to be one of my bigger mounds for sure. I’m curious. I had a fig tree planted in a sunken pot with large holes punched out near the bottom portion of the sides near this location. I ended up digging it out to plant elsewhere and noticed none of the roots ran out of the holes after 2 years. I’m wondering if the water kept them in check. I’m placing one of the new mulberry varieties I have coming here, so keeping the roots contained to a small area wouldn’t be a bad thing.

Oh yeah. Those blackberries made me gallons upon gallons last year

How old are your plants? Did your floricanes survive the winters? Mine didn’t last year, and some have already croaked this winter. Not too optimistic on getting berries on them this year.

They’ve been in the ground 2 years as of this month. I don’t see my winter being cold enough to kill the things. We only hit 15 or so degrees once every couple of years, if that. The primocane berries do take a bit of work to get though. I have to prune twice to delay the berries until cooler temps.

Ok thanks. Was your primo crop bigger than the floro crop? Mine are two years old in April. My Freedom had a huge floricane that I never pruned, so it was huge. I didn’t trellis it either, so it got about 12ft long. It didn’t make it thru last winter. I think what killed it was it woke up in March, and then we had a very deep freeze.

Last year, though, there were several primocanes that came up, and I got a little fruit off those. I tipped these canes at about 2ft, so I have lots of laterals. It suckers like crazy compared to the others.

I also have Traveler, another primocane bearer, and its florocanes did a lot better, I got more fruit off it last year. I also tipped those at about 2ft.

Ouachita and Osage gave me a small amount of berries last year, Osage less so, but had a better flavor than any of these four. It has some huge canes (1 inch thick) this year, so I’m looking forward to more off it.

I’m planning on ordering the newest variety, Caddo, this year. It’s supposed to be a very good berry.

Ok thanks. Was your primo crop bigger than the floro crop?

No. I didn’t get even close to same amount as the floricanes, but it’s nice to have fresh berries that late into a year. Out of my 5 plants, I think I may have ended up with a gallon baggy, if that. Not bad, but not great. They do like to wake up early, that’s for sure. The growth they put out is just ridiculous. I barely fertilized mine with some 10 10 10, but you would have thought I hit them with a bag of urea fertilizer.

I’m growing Ouachita, Osage, and Natchez as well. One of them gave me extremely small blackberries, but I can’t recall which one. I might end up pulling a couple of them up and planting the mulberries I have on the way in their spots. Prime Ark produces plenty of blackberries for me. The rest are dedicated to juice due to lack of freezer space. That juice is so great…tough choice, but I’m running out of room. I’m ready for the season to start back up. No idea what to expect, but I’m having a hard time imagining there will be more berries than last year.

It was pretty cool out today, but got a little work done outside. Weeded a couple more of my apple trees, they had an obscene amount of weeds around some of them. This was on top of weeding three yesterday.

I noticed some dark areas where the rootstock meets the soil. I’m thinking it’s a bit of root or crown rot? Having the weeds around them may have contributed to that, by not allowing it dry out properly? Also looks like some of the stocks have been shedding a bit of bark. It doesn’t look too serious, but doesn’t look good either. I think clearing the weeds might help them by airing that area out a bit.

On some of them, I did a trunk wrap from the ground up to about 3ft. The material resembles panty hose and is supposed to help prevent sunscald and insect issues. I wonder if it’ll keep rodents from chewing thru it to get to the bark?

On that note, I had a couple of apples damaged about a year ago because of rabbits chewing on the lower part of the tree by the graft union. I put tree wound compound on the damage then, and it looks like some new bark has grown through the compound, which is encouraging. I was thinking then I might have to try bridge grafting to save the tree, but maybe I won’t have to.

And so it begins.
First Washington Navel Orange of the season. Surprisingly sweet, with still a hint of tartness. They will reach their peak in another month, or so.

Note: check out how thin the skin is this year, bearing witness to the milder than normal winter with no “real” cold. Most years there’d be another 1/8 more thickness on this rind. 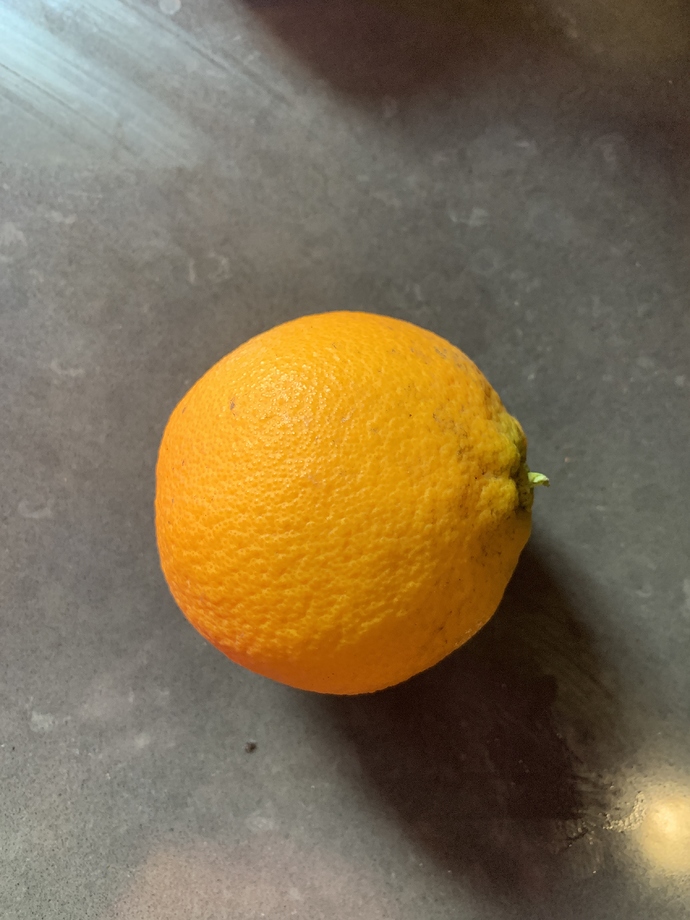 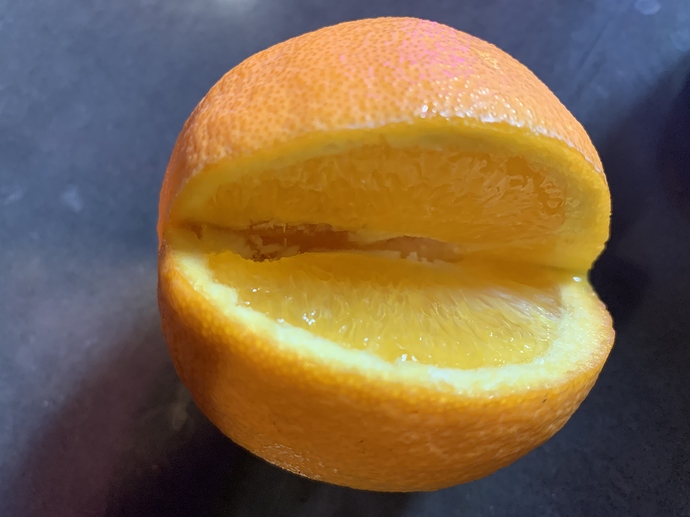 I don’t know. Usually there has to be a designation of BIO for them to be organic. I posted many pictures posted of apples to carrots that are BIO. They must be labeled so.

Sounds as though you might have water table troubles. If so, may I suggest you try Geneva 30 and Malus Fusca (Oregon crab) as root stocks? Both are tolerant of wet feet. It would make for a stunted Goldrush since it is already of modest size when grown, but you might succeed in the long run.