Thanks.Yeah, we get a lot of rain, mostly in winter and spring. We average about 36in per year here. Summers can be wet, too, but last year was an unusually dry one for us. That meant a bigger and longer tomato crop, since the plants usually get disease ridden by August.

Anyway, we have three trees on G30, they all have flourished, no matter where they’ve been planted. I wish more of my trees were on it. When I bought my trees years ago, I was more focused on the variety instead of he rootstock, so I may be paying the price for that now.

I can’t move some of my bigger trees, but there are 3 or 4 that I’m considering moving because of water issues. They have struggled to get established, excessive water may be a culprit, but it also could be the rootstocks and or the soil quality.

Regarding Goldrush, I have a potted one I grafted on M7 a couple years ago, and five other varieties, so those are going in the ground in a couple of months. I have other M7 trees, and they seem to be a slow grower the first couple years, but last year has really took off. They seem to tolerate wet feet okay. They do produce rootstock suckers, though.

Bought oranges today that are called ‘Chocolate’ do you all know about this variety? I am probably slow! Mrs. G 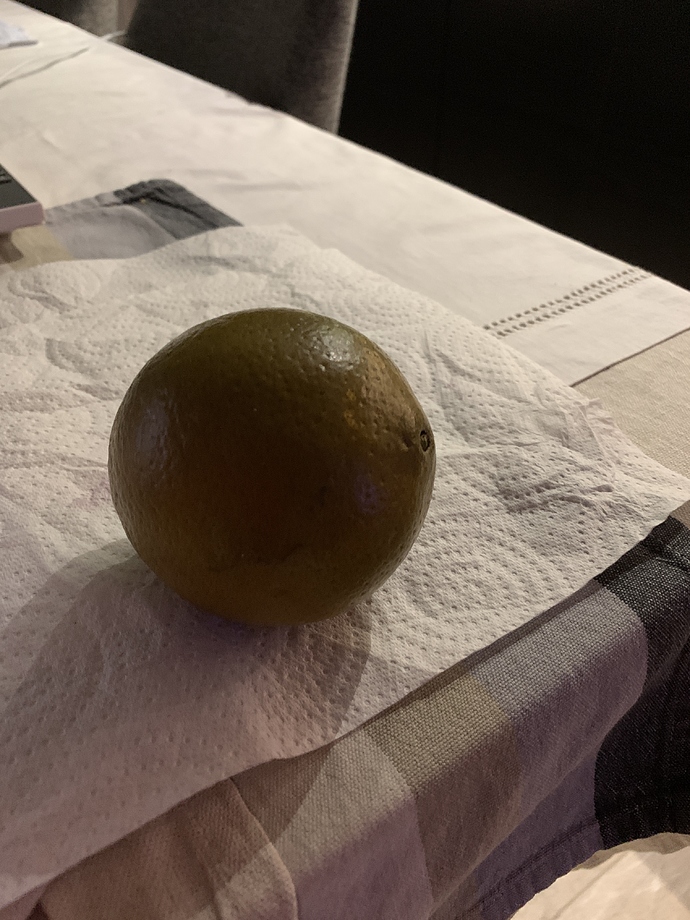 Are they actually brown on the skin or are they dark green?

They are a greenish brown I will slice one open and send another pic. They are just so unusual, I didn’t want to cut them or peel them yet.

Mike I finally peeled one tonight. They peel like a navel orange. They are very light orange in color here is picture I took of the rind and a couple of wedges. It was tart with sweetness, but not sweet like a navel, Cara Cara or Blood Orange. Blood Oranges are on their way. I saw a few last week, but they were too small. About the size of tennis balls! Heres the picture! Mrs. G 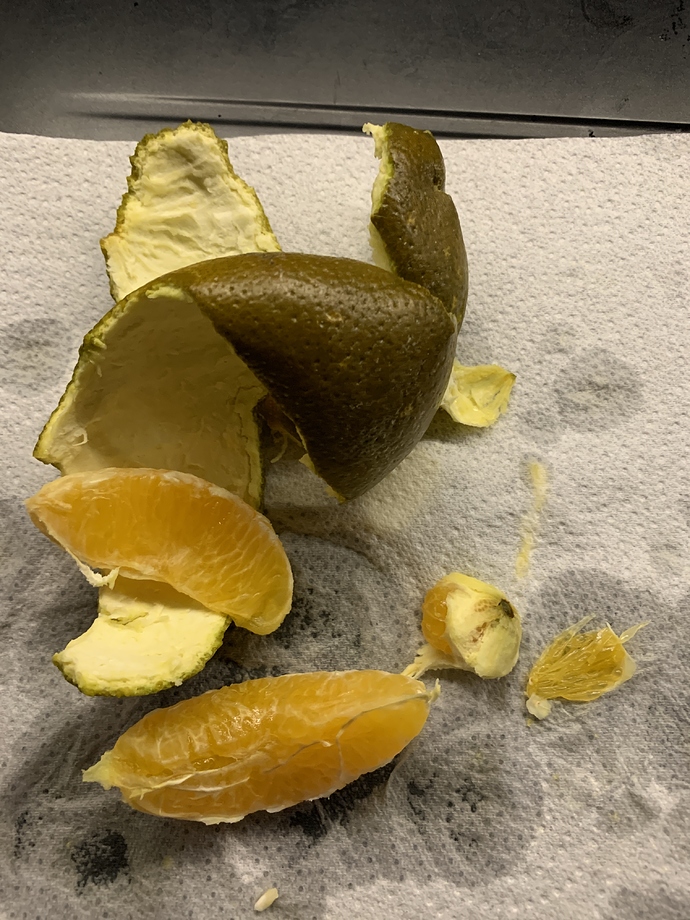 As you can see the seeds are flat, I believe making them non-viable.

M7 is notorious for its root suckers; Geneva 30 notorious for producing few in the stool bed - & a couple spines. I haven’t had much incidence of spines. G.30 has averaged 3 or 4 shoots a season from one root. You might try it, being pretty easy once you understand the steps.

I got Geneva 30 from Raintree. Lately they have also offered Malus Fusca. Might be worth asking…

You might try it, being pretty easy once you understand the steps.

Are you talking about propagating rootstocks from suckers? Like in a stool bed? My G30 trees haven’t really grown any significant suckers.

I got Geneva 30 from Raintree

But, along that line, one of my trees on M7 is an almost 5th leaf King David. I was out inspecting things recently and saw what looks like a 4ft tall root sucker! I’m pretty sure it’s from the rootstock as it’s red and speckled looking like apple wood does. It’s maybe an average of 1/3" thick.

Could I cut this sucker off at the base and cut it in four one foot long pieces, and then somehow try to get them to produce new roots for use as a new rootstock?

Like maybe dip the bottom of the pieces in rooting compound, plant them in pots or maybe in the ground to let them grow their own roots. After a year in the ground would they develop enough roots for use for bench grafts?

Thank you for posting the extra pictures. Glad you mentioned the taste as well. Interesting orange for sure.

You can start cuttings that way, by dipping them in rooting hormone, putting in a pot (or ground) while being careful not to rub off the hormone - make a hole wider than the diameter of the twig and press around it. I’ve done it with the top part cut away when grafting.

To stool with one, after getting it to root and planting it in ground, let it grow a season to gain strength. At the end of winter cut it nearly to the ground. It will send up shoots from the roots. As they grow, put a cylinder of hardware cloth or the like around it & pour wood shavings in the cylinder. (Avoid walnut shavings.) Leave some leaves above the surface of the shavings. Month by month, add shavings so they get & stay a couple inches deep. The shoots will push roots in damp shavings. The next spring, wash or gently rake with fingers the shavings free of the shoots & roots. Cut the shoots at ground level and you have made your own root stocks. New shoots will grow as did at first. 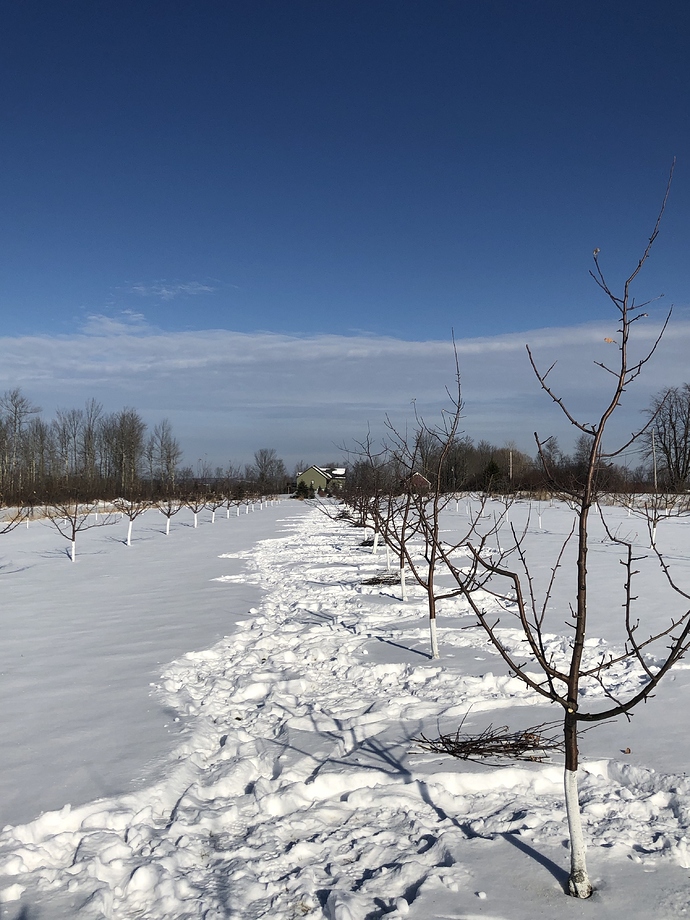 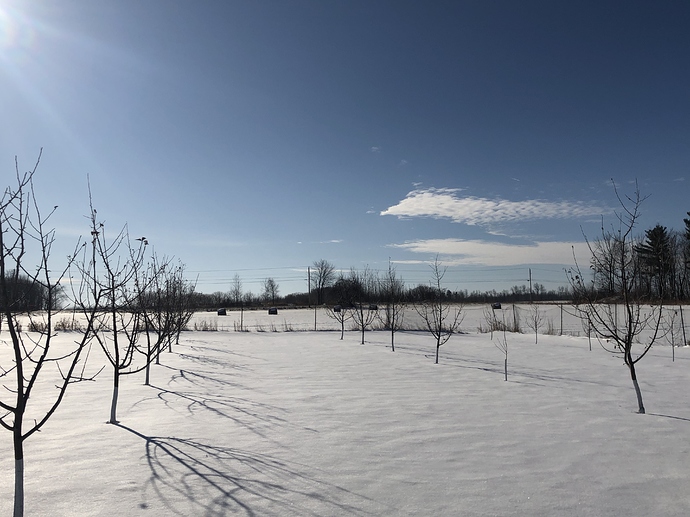 Mother Nature’s best way to say “Cheer Up and Happy Lunar New Year” to everyone. 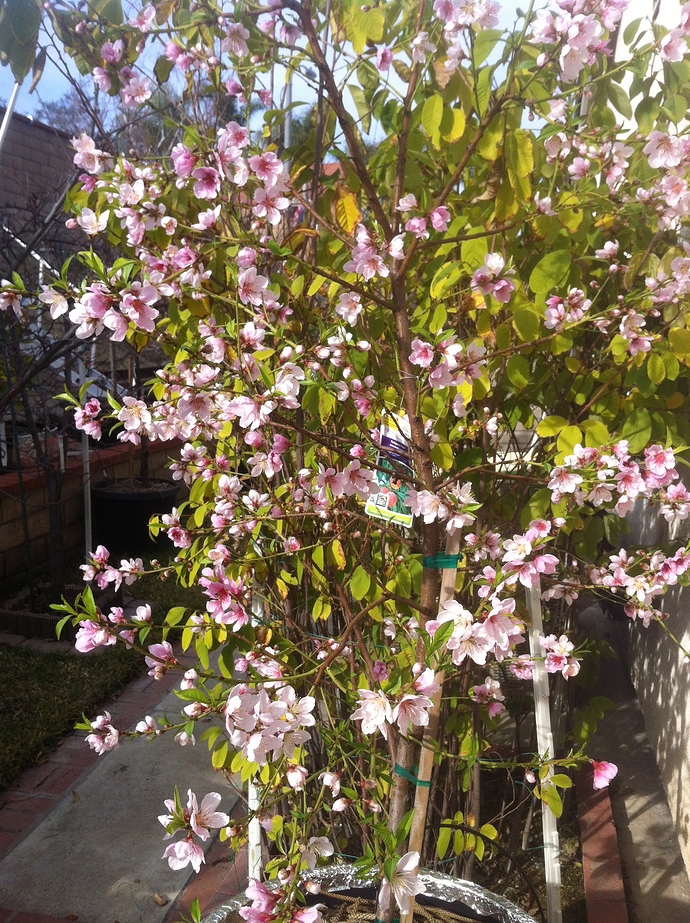 Flordaprince Peach ( with cherimoya leaves in the background)

Last apple of the season, White winter pearmain. There were two crops. The first crop was at the end of August with green skin. The second crop picked today had red skin. I really don’t know why. 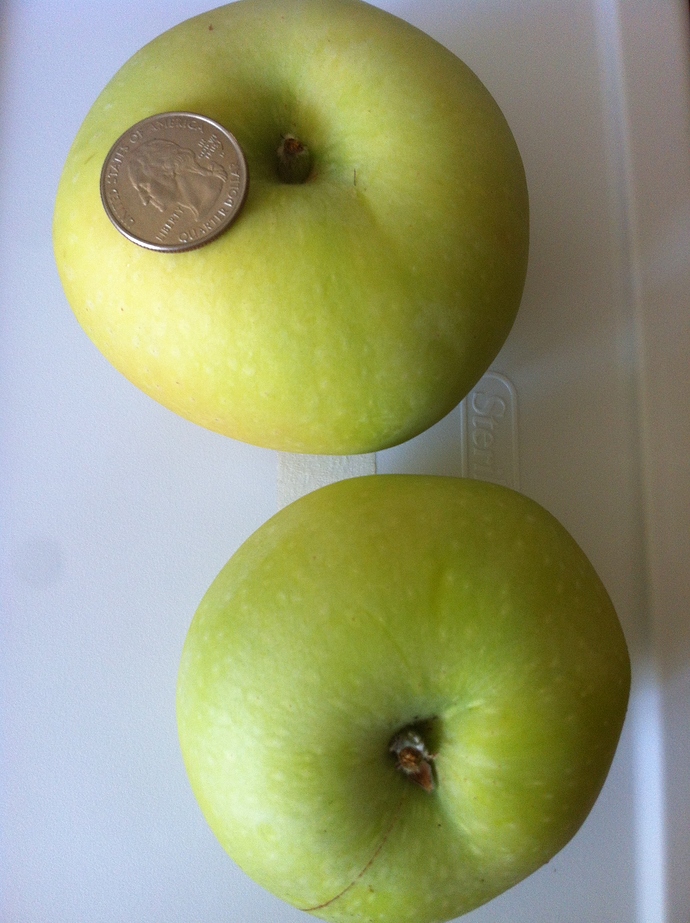 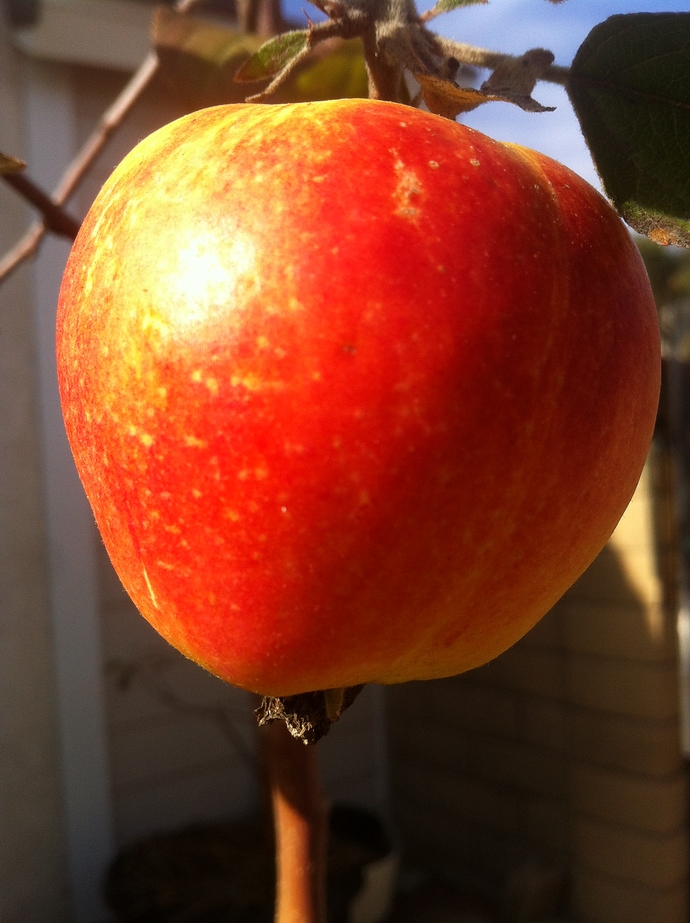 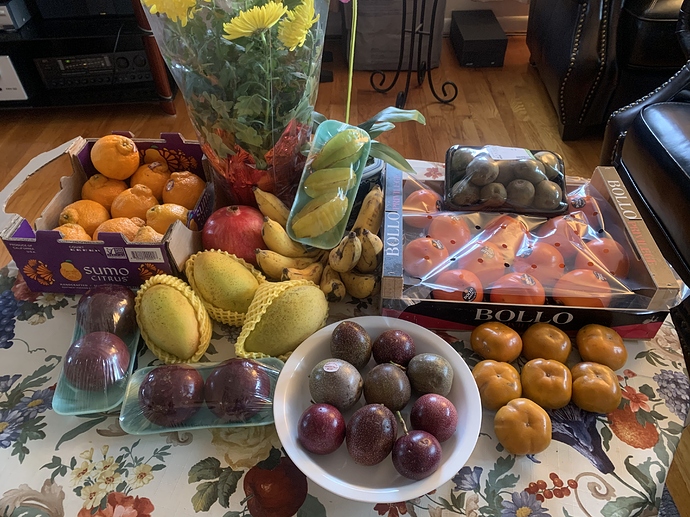 The holiday means a lot of interesting things that I don’t get to eat very often in the States are available at the markets. I definitely treated myself this year.

@mamuang do you recognize these bananas?
Here are some unripe ones at the market. 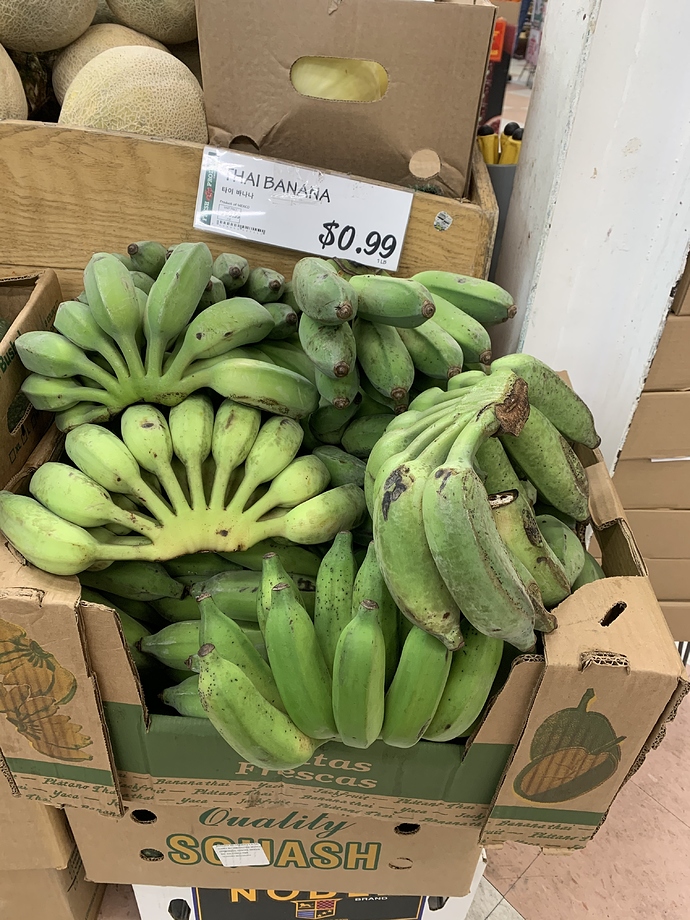 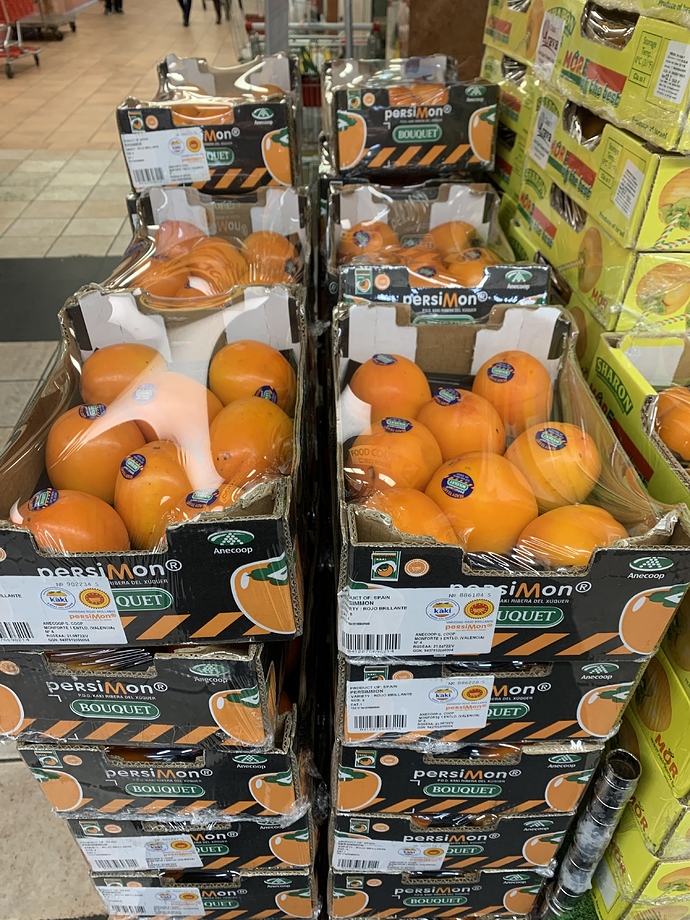 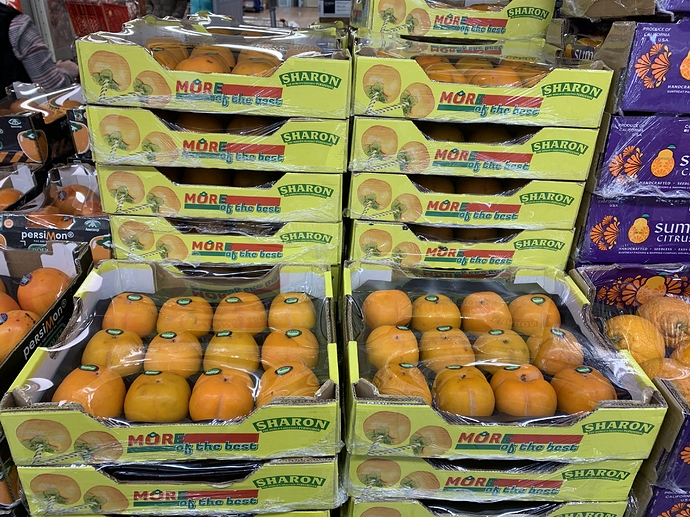 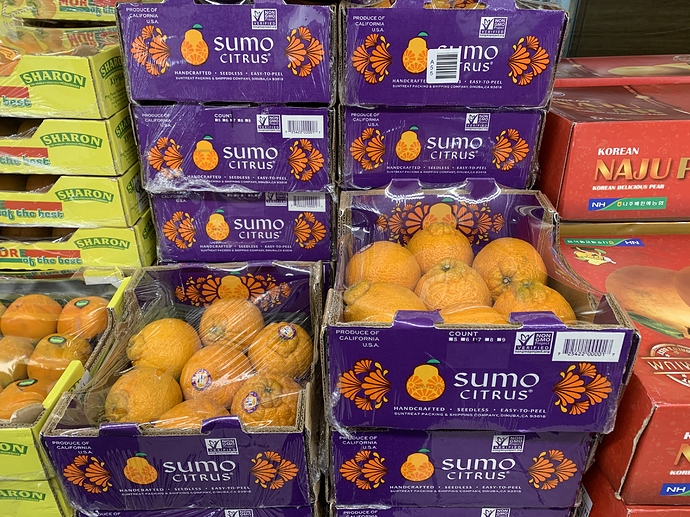 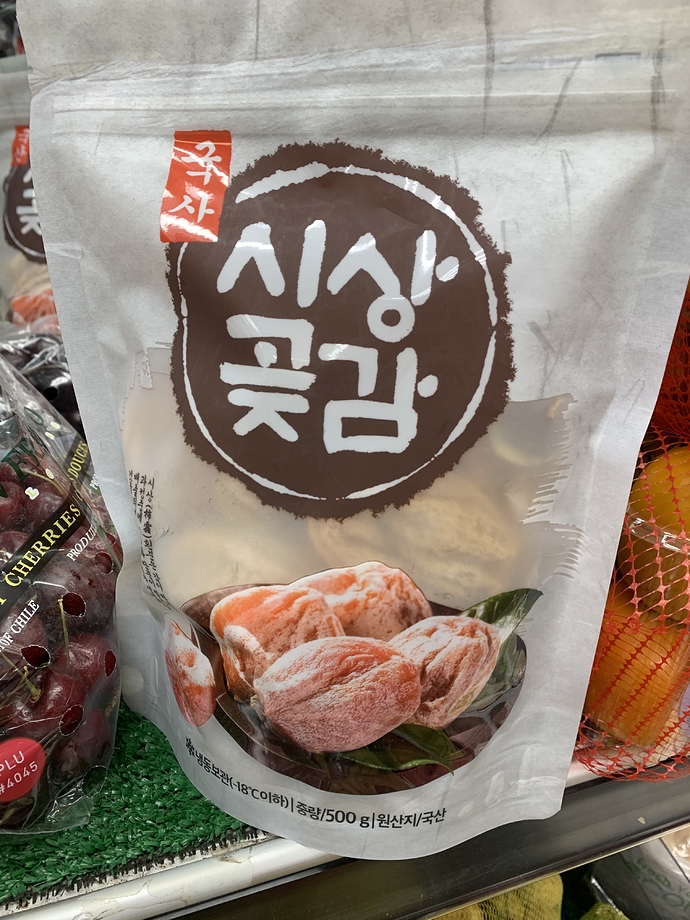 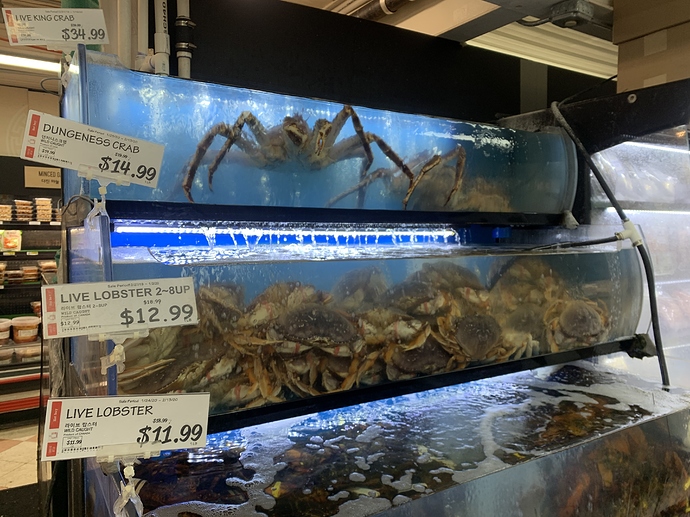 Drew,
Was the store you shopped for these fruit an Asian mega grocery store like HMart?

Yes, those bananas are called Nam Wah (น้ำว้า), probably the most common banana variety in Thailand. I believe @Richard grows it. It is supposed to be very nutirtious. Very ripe Nam Wah is often the first fruit for Thai babies and toddlers

Those fruit look delish. I would help you eat them all but Star fruit. I am not a fan of Star fruit to begin with. Once I’ve learned it is not good for those with a kidney disease (I don’t have it as far as I know), I drop it off my fruit list.

A Vietnamese store near me carries very beautiful and large pomeloes at $5 a piece. I was tempted. It has soursops, too. I have never eaten soursop.

May you and your family have a happy and healthy New Year!!!

@PharmerDrewee I second Mamuang’s curiosity, what’s the name of this store? And where is it located?

I just gained 4 acres of undeveloped land to use! Anyone able to identify those buds? Wild plum and pear maybe? 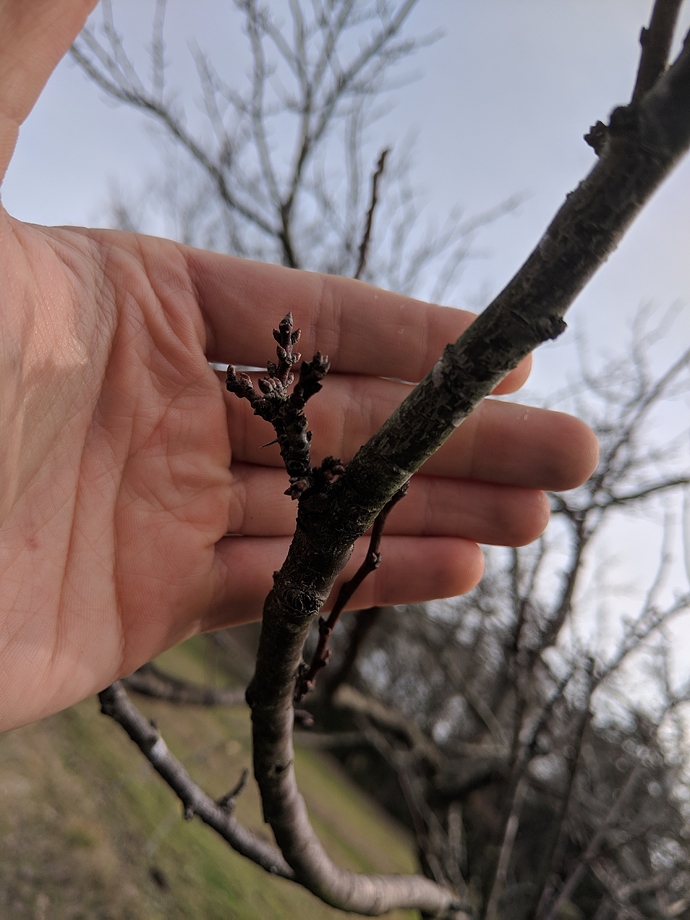 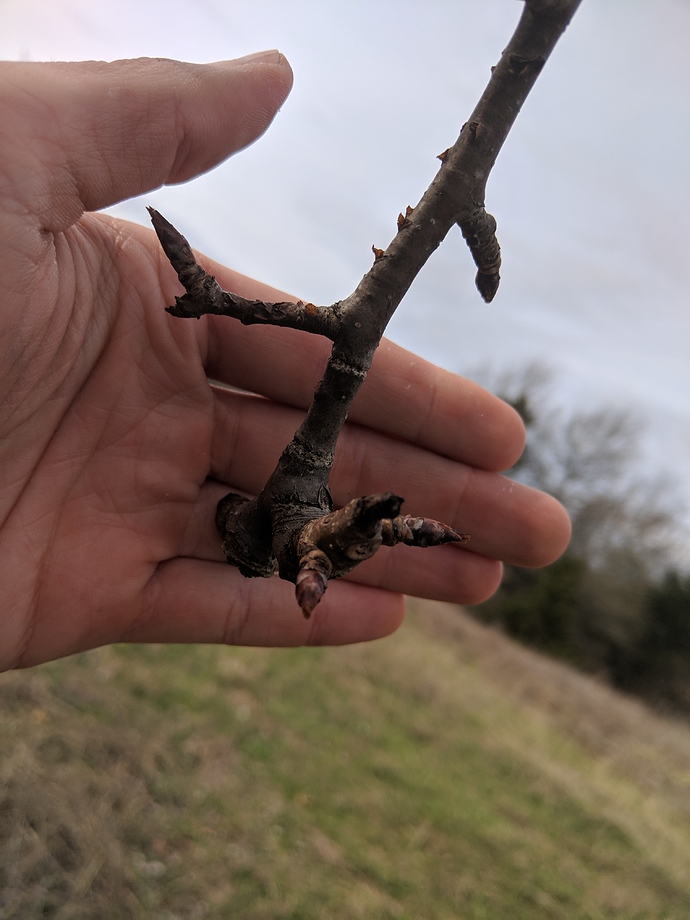 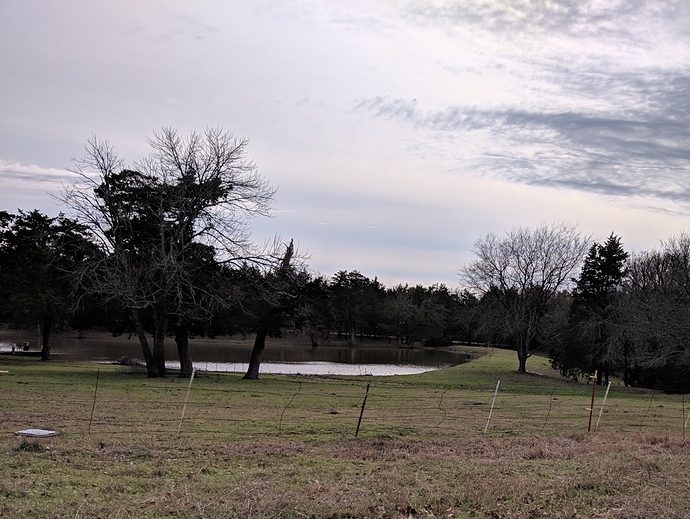 Tippy, those bananas are the most popular variety in Viet Nam too. I don’t ever see the common grocery store ones over there at all.

Never knew that the starfruit could cause kidney issues. It’s not something I eat very often. I just appreciate the aroma. There are much tastier fruit out there. I like the green pomelos that have a clear yellow/white pulp. They are so sweet and good even though most of it is the rind.

Soursop is not very good to eat fresh. It is just that, sour. People use it to make smoothies or soak it in sugar to make candy in Viet Nam. The related custard apple and atemoya are the preferred relatives of the soursop for eating fresh over there.

There were other fruit such as longan, rambutan, and mamey sapote but one can only eat so much fruit before the stomach gets upset. These are also so commonly available throughout the year now that I don’t crave them. Mamey sapote is only good for making ice cream and smoothies too in my opinion. Surprisingly there was no fresh durian available even though it was everywhere a couple weeks ago.

Pruned the American hybrid grapes and muscadines today. I’ve read that folks have luck with hardwood cuttings of Champanel and Black Spanish, but the muscadines are a no go. It’s too bad. The amount of cuttings I get off the 9 muscadines is about 4 times as many as my 4 hybrids just in this second/third year. I can only imagine how this is going to be next year.

Also cut back the elderberries(which seem to be waking up already), rest of the figs, and autumn olives. A few stray pomegranate limbs became cuttings as well.

Allowing my students to choose three to start this coming Friday. Should be fun. 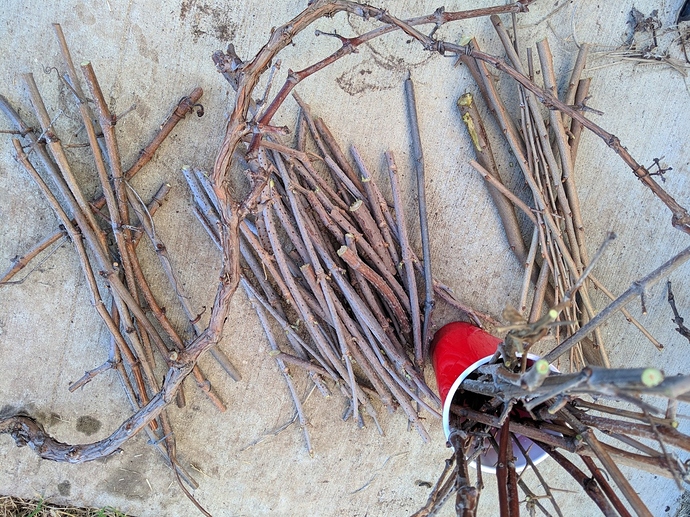 This muscadines weeping water/sap/whatever it is still weirds me out a bit, but the vines did fine last year after doing the same thing. 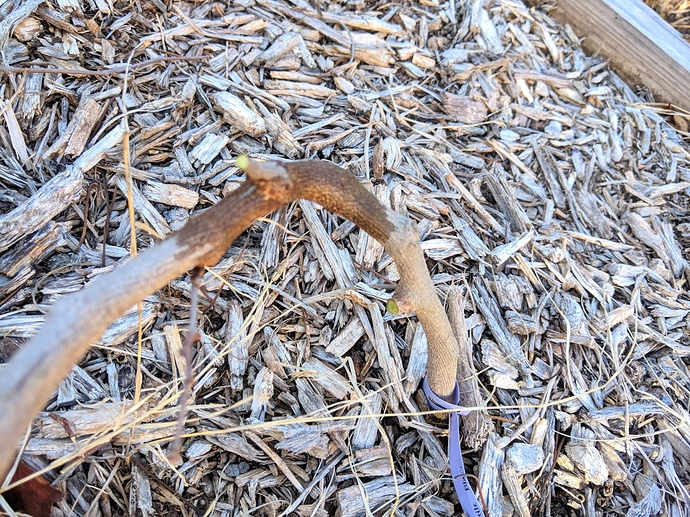 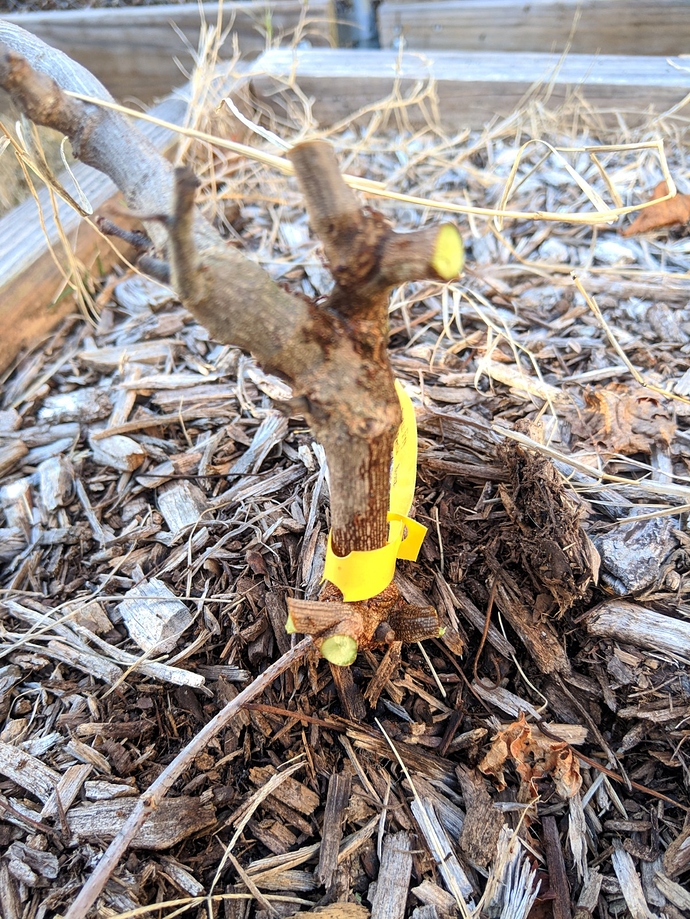