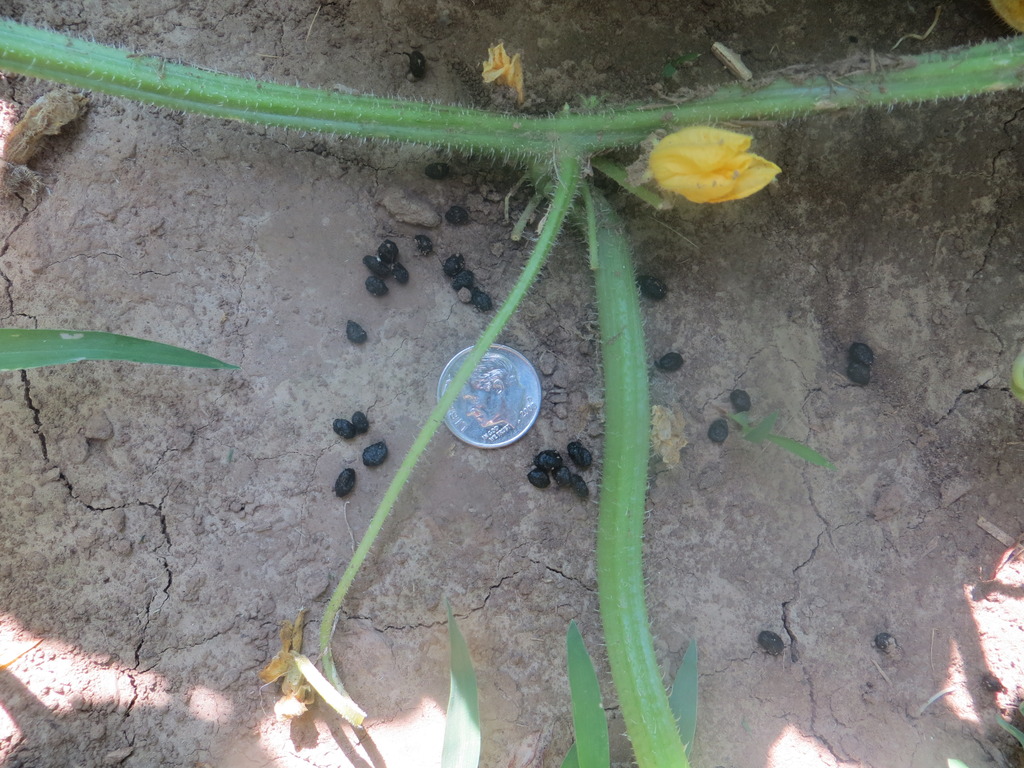 I noticed quite a bit of this is several places under my cucumber plants. Before now, I’ve never had more than a couple cucumber plants, but this year I went nuts - and they went nuts!

So now it’s more or less out of control out there, and as I’m trying to sift through the leaves and make a path to step, I just now started noticing these droppings.

The closest thing I can come up with to be descriptive is that they appear to be roughly the size of a black peppercorn.

They’re separated (not clumped) and so I didn’t think they’d be a toad, I wondered about mouse (or vole) but not sure what a field mouse dropping would be like compared to a run of the mill mouse that might get into the house… (And our cats do spend a fair amount of time in the fenced in garden area, even after dark…)

From what I can tell I haven’t suffered any damage to fruit or foliage that I’ve noticed anyway.

Maybe it’s just a kind of toad/frog that drops different that the ones using the floor of my out buildings?

I’ve spotted tomato horn worms by first noting their droppings. Those look more like a rodent. But my certainty is low.

I think I’m kinda hoping for the rodent angle - maybe they leave plant stuff alone and dine on bad bugs (until our 3 cats probably eventually dine on them) Ah, the cycle of life!

it pooped a quarter? Yikes!

Do they stick to your teeth?

I think that is a dime, still would have hurt.

it pooped a quarter? Yikes!

This one only does dimes, but even at that I may plant more cucs next year…

Do they stick to your teeth?

I kind of think so too, and again no real damage to any garden crops being done that I can find anyway.

It may be that it’s something coming in to dine on bugs. I have a small row of pole beans right by the cucs that have been loaded up with JB’s. I’ve not sprayed anything in the garden for them, just been knocking them into a pail of soapy water (but they’re winning).

I needed two or three more cucs to fill out a jar of pickles so went out to get some more and all three cats are lounging under the cuc plants. Probably just coincidence but ya never know.

Ya know, it just never occurred to me that it could be a rabbit, I mean the rabbit droppings that I notice seem a lot bigger than this, but heck after doing a search on the net it sure seems like it could be… they’re darn thick around here and our cats catch them regularly. Small ones anyway.

The fencing I use has 1 7/8" spacing which I do imagine a baby rabbit could squeeze through. Maybe before next garden season I’ll go around the bottom with poultry netting just in case.

Maybe before next garden season I’ll go around the bottom with poultry netting just in case.

I just had to do that with my nursery and about to do that to my vegetable garden. When you put up the poultry netting, make sure it sticks out at the bottom a good 6 to 9 inches. That way the critters can’t easily burrow under the netting. 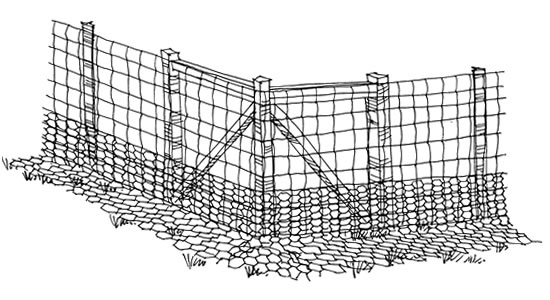 When you put up the poultry netting, make sure it sticks out at the bottom a good 6 to 9 inches.

I have a neighbor that’s wishing he’d done this. He lost all his chickens to what he thinks is a fox that got under the fence.