Maybe, maybe not, however the wording indicates that you are agreeing not to propagate any plants bought from them. Since I propagate, I like to read the fine print on all plants or company policies before buying. I have not seen this type of wording very often from nurseries. So, again, if they only mean patented varieties, the wording of their agreement needs to be changed.

And as far as them being able to enforce their terms, the point is, if I buy a plant that does not have a legally protected patent on it, I do not expect the nursery that I buy it from to try to tell me what to do with that plant. That’s unacceptable to me, personally. Some people may not mind it and only want the amount of plants that they buy from the nursery. Others may just ignore the “agreement” and propagate if they want to. I’m just highlighting their stance on propagation so that people can make informed decisions before buying.

not sure if i have mentioned before, but i created a haskap Facebook group, everyone is welcome to join if interested… it’s called something like honeyberry haskap growing and info.

Update on HoneyberryUSA’s posted policy on propagation. This is now posted on their site:

“Any propagation of any plants under Plant Breeders Rights is strictly prohibited without a license agreement with the breeder or designated authority.”

I appreciate the clarification in language (and definition link), but it is difficult to decipher which plants they believe would fall under PBR since I don’t see any tagged as such. They have certain patented varieties now linked to the patent it is associated with, which is great, in my opinion. They went the extra mile there, but PBR is different than a patent, so I would be interested in knowing which plants they have for sale that they consider to be under PBR. It would be nice if they would label them as such.

I’m not trying to be a difficult potential customer, I just like to know what I am agreeing to before I buy anything from any company (not just this one).

Expecting the vendor to keep customers informed of which cultivars are on or off patent is simply not a reasonable expectation. About the only vendor that I can think of that tells you if a selection is on patent is Starkbros and thats because they release there own patented cultivars.

I’m not sure who you shop with, but most of the nurseries that I shop with list the PP# or PPAF# along with any plants that are under patent somewhere in the description. As a matter of fact, I actually can’t think of any nurseries that I shop with that don’t list the PP# or PPAF. It is a standard practice. Even HoneyberryUSA had PP#'s to patented varieties listed before they changed it and added a link to the official patent page (which is what I meant by “they went the extra mile”).

Also, Starkbros sells patented varieties that they do not hold the patent for. For example Double Gold Raspberry is under a patent held by Cornell University and Starkbros sells it, lists the PP#, and the fact that Cornell U. holds the patent. So, I’m not really sure what you are referring to when you stated that they tell “you if a selection is on patent… because they release there own patented cultivars.”

I will have to respectfully disagree with you. I believe it’s quite reasonable to expect nurseries to list PP#, PPAF, PBR or PVR on specimens that they sell, especially since they expect you not to propagate said specimens.

We have a malicious insect. So look out for him: Oberea pupillata
They dry up the twigs and can even cause the whole plant to die. 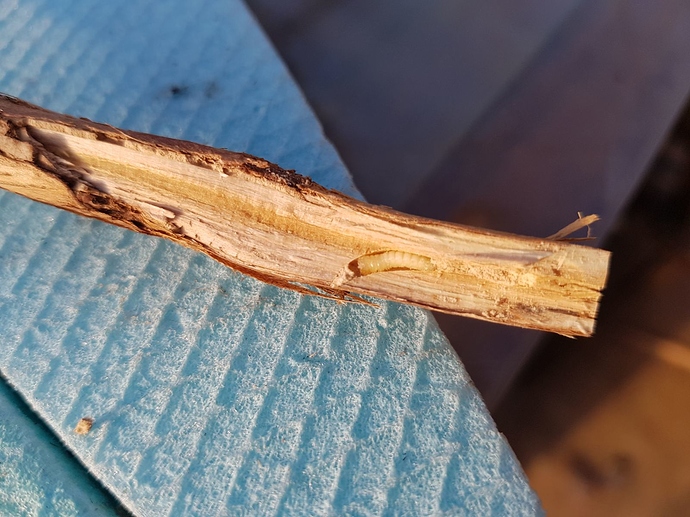 Do you have any information about combating this pest? 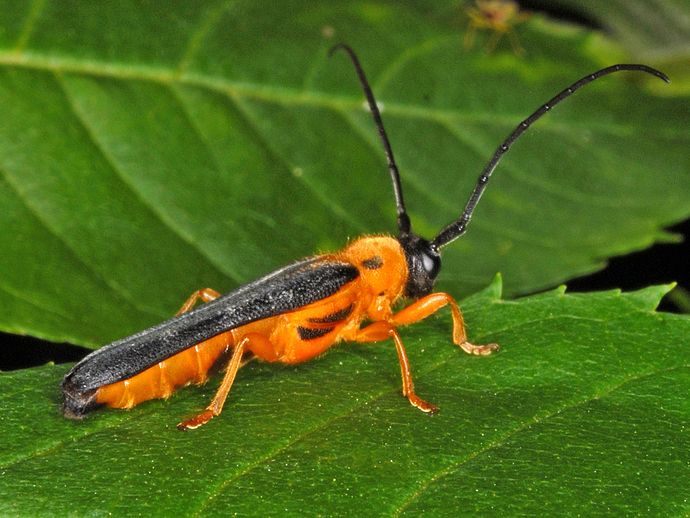 Beetle of the longhorn beetle family, which can cause the death of the whole honeysuckle plant. Adult beetles have an elongated body, 16-18 mm long, head and chest are as wide as the elbows. The antennae are shorter than the body. They are colored yellow-orange, the head, antennae and trusses are black, two black ellipsoidal spots are on the sides of the shield. The elbows are black with fine gray hairs. There is a yellow spot at the base of the trusses. The stain is sometimes elongated to the end of the trusses.

The eggs are brownish, matt, elongated, slightly curved, 3.5-4 mm long, 0.75 mm wide. The surface of the chorion has a specific structure, bumps and grooves arranged in spirals that allow the capture of symbiotic fungi. They serve hatched larvae as a source of food.

The larvae are, as with all longhorn beetles, elongated legless, reaching about 2 cm in length, the head is long, narrow, running almost the entire shield. There is a large cavity on the underside of the head allowing deep head tilt. The butt is composed of 7 cells, it is equipped with bumps, which the larvae when moving on the walls of the hallway.

The pupae are loose, yellowish, little sclerotized, on shields with thorny bumps, hidden in a solid cloak chamber directly in the host plant.

The first adults hatch at the end of May, in highest numbers at the beginning of June, they are active until July. They leave the wood with a typical round trip hole. Males hatch about three days earlier. In sunny weather they fly around host bushes, most often between 10-12 hours. They hide under the leaves in bad weather and at dusk. A sexual nutrient is required for sexual maturity. On the underside of the leaves they eat the main vein towards the petiole. Feed often turns to strong side veins. When eaten, they often bite the petiole close to the blade so that the leaf falls off. Adults live about 20 days, females several days longer than males.

They dome 1 - 2 days after hatching, the male is firmly attached to the female’s back with the feet. Females are fertilized several times by different males. Eggs are laid 4 - 6 hours after copulation, in hatches of 6 - 8 eggs, a total of 42 - 56 eggs. They increasingly consume food during the period between laying. They lay eggs in the trunks and sprigs of healthy honeysuckles. Before laying, the wells dig into the bark to the bast, deepen the well into the wood with a false hammer, and push the egg between the bast and wood, 3 - 6 mm away from the well.

The larvae hatch in 12-14 days. When hatched, they are about 2 mm long, reaching 2 cm in length. Fine sawdust is poured from the holes created by the female during laying. The larvae initially eat the bast, creating an irregular cavity just below the bark. They wade through the wood into the pulp and eat up the corridors. Larvae in twigs thinner than 1.5 cm progress downwards. Corridors are 8 - 15 cm long, in the thicker branches are shorter. Up to four larvae can develop in one branch. Attacking is manifested by the fall of leaves. At the end of development, the larvae form chambers just below the cortex. The larvae hibernate; at the end of April, depending on the temperature. The whole development takes 2 - 3 years.

The host plants of the honeysuckle are various species of honeysuckle (Lonicera sp.). It inhabits the environment from lowlands to foothill areas, depending on the occurrence of host trees. It is more or less widespread in much of Europe except the British Isles, Denmark and Scandinavia. In some years it is more abundant especially on the honeysuckle cultivated crops grown as ornamental trees in parks, as hedges, along roads or as fruit trees. Significant antagonists are predatory imagery and larvae of cyanobacteria, predatory robbers. Under the bark, predatory larvae of common snakes are commonly found. In the larvae, parasitic parasites or lumens.

Importance and possibilities of regulation

Honeysuckle valerian attacks both weakened and healthy trees. It can multiply to a high frequency. Infested branches and trunks of honeysuckles can break, shrubs are subsequently attacked by wood decaying fungi and whole plants can die.

Protecting honeysuckle against honeysuckle val is as difficult as against all wood decaying pests. From late May to early July, imagery can be captured with cellars early in the morning or before sunset, or with an entomological net between 10-12 and 15-17. When sawdust is detected (in July), cut and burn the infected branches. Registered insecticides with a profound or systemic effect can be applied to the infected strains. In 2019 insecticides with the active substance alpha-cypermethrin and deltamethrin are registered against wood-destroying beetles.

is this a native pest or another invasive?

looked it up . its another invasive from eastern europe.

So, is in North America (yet)?

sadly according to invasives.org. it used to be a minor pest until people started planting ornamental honeysuckles in their landscapes then they exploded.

I just wanted to report that despite my honeyberries blooming about 4 times over the summer they are absolutely loaded with flowers right now. All the bushes are in bloom, some for the first time-I am very pleased.

Thanks @Viktor for all the great posts. Loved the bee video! Bumblebees love them here in Canada too and I think they do a great job bringing them in early before the other fruit trees start flowering.

I have tasted Honeybee, Borealis, Tundra, Aurora, Blizzard and Beauty. By far Aurora is best for fresh eating with Blizard 2nd (Blizzard and Beauty just lack some complexity/acid compared to Aurora). Here in 4b Canada (USDA 3B) winter ends so abruptly that pollination is not a big deal as they all overlap with flowering times, Aurora in particular produces flowers for a LONG time. I have pulled out Borealisa and Honeybee cause they suck for taste. Tundra is only good for baking with added sugar, too tart for fresh for me but I am keeping for pollination.

You 100% need to net to allow them to ripen on the bush otherwise the birds will get them all 1-2 weeks before they are actually ready to be picked.

@ DavesMead. Any chance you could post your mead recipe? Do you add your fruit in primary or secondary and how much per gallon? Favorite yeast? I’ve done Joe’s Ancient Orange Mead with great results (need to remove more pith next time) https://www.homebrewtalk.com/forum/threads/joes-ancient-orange-mead.49106/. Would be really interested in trying a mead with my fruit. Have you tried Tundra in your mead?

As a preface, I’m in zone 6a. I have Auroras and Tundras planted together. I see flowers on the Auroras, but not on the Tundras. Also, the Tundras seem to be not as leafed out (if that’s a phrase) as the Auroras. Does anyone know if this is normal for this time of year in zone 6a?