Where did they go?

I planted 100 of these crocuses in November. Three have come up. Three. A 3% success rate. The bulbs were solid and healthy and even had small shoots already starting.

You can see two blooming, and one more green shoot a couple inches away.

I put chicken wire over top of the soil after planting, and buried that in 2” of mulch. I see no evidence of holes anywhere, so I don’t think they were dug up and eaten. What could’ve happened? 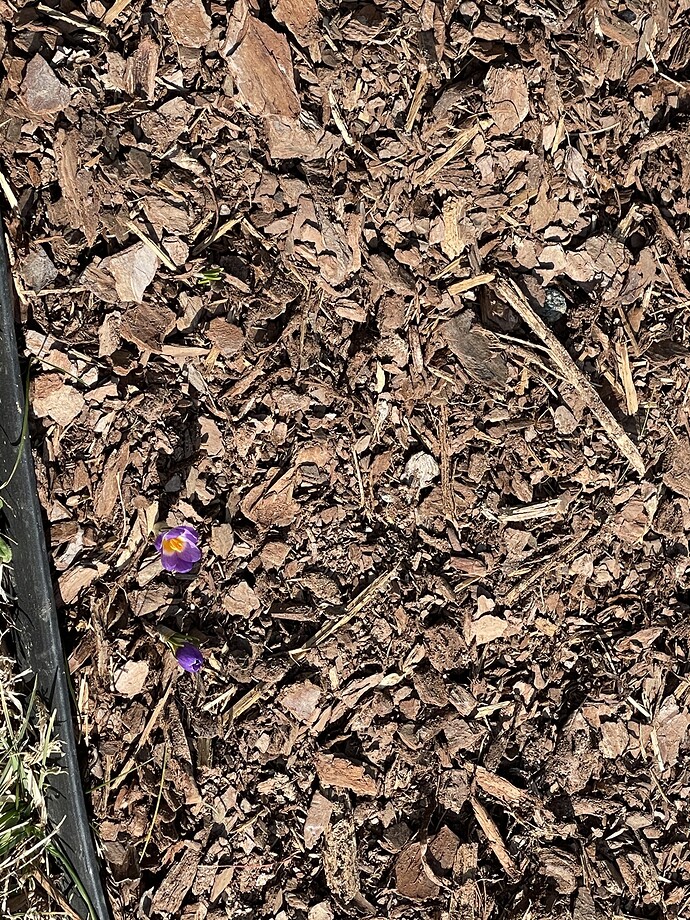 Pocket gophers here raise hell with any of my bulbs. They tunnel below ground and eat roots/bulbs

That’s possible, but I don’t see any nearby burrow entrance.

Did you plant all of the kind or were they mixed? Some of mine are blooming and others are just starting to come up.

I’ve had bulbs come up later than expected the first year after planting. They either aren’t getting as much chilling or just taking more time to settle in. Hopefully, more of your bulbs will emerge over time but maybe not as much all at once as they would in a normal year?

But if voles are around… well maybe they are gone.

and buried that in 2” of mulch

They are working really hard trying to grow out of that 2 inches mulch, some may exhaust its energy

The daffodils nearby don’t seem bothered by it.

It’s early yet. Even within a given variety and a given bed, I see a spread of a up to a few weeks of when they come up.

All the same kind in this bed.

I could definitely be true, but I’ve even brushed the mulch away to see if there’s any sign underneath, and I haven’t seen anything.

Ok. Now about 40 more have popped.

They ended up doing very well, they were just very late to emerge. I imagine they will “adjust” this year since they were made in the ground.

I planted some crocus bulbs a couple years ago, and within 24 hours the chipmunks had dug up every last one!

It must be too cold here for daffodils. Can’t get them to grow here. They did great and multiplied when we lived further down the state.

Daffodils do well up here as long as we get snow cover before the brutal temps hit. If there’s no snow cover and it hits -20, they’re toast.

Interesting. I suppose every time it’s gone under -15 or so here there probably has been some fluffy stuff on the ground.
Never have lost a daffodil that I am mindful of…not even in pots.
Oh…take that back…those really good smelling ones “Paper-Whites” do die in pots here.

If/when it hits -15 there, is it typically about now (mid-late January)? Sometimes at home it’ll hit -20 in early-mid November. That can be problematic. Another issue is that we will get a rare December/January thaw (very rare lately). The ground turns bare, then we get a number of weeks straight of -20 and lower. That will really raise heck with a lot of growing things.