Which apples do you have ripening now?

Perhaps it’s due to the warm weather, but I have a big ol’ tree full of what I think are Golden Delicious that are ready for picking here in northern VA. I’ve been eating 3-4 per day from the tree for the past 2 weeks. I think now, though, they are about ready.

This is my first experience eating tree-ripened apples. If this is a Golden Delicious, it’s far better than any I’ve had from the store. Crunchy/crispy, and midway between tart and sweet. We fried some for supper last night and ate them with biscuits, bacon, and eggs. Man, they were good.

We have a second, smaller tree that I think is a McIntosh. They’re turning red, but they’re not ripe yet. Perhaps in 2-3 weeks.

What do you have ripening now?

Right now is peak Kidds Orange Red season. Its a great apple, similar to its child Gala but more crunch and more aromatics. Pomme Gris are just coming in. Wagener are mostly finished, I really am liking that apple. I’m trying to figure out when to pick Hunge, I got one a bit late and one too early. I think the early one is a fluke and they are still a few weeks away. It has a unique flavor and could be a really nice apple. Mother just finished. It has a really nice rich flavor but its hard to hit the right picking window and they turn bad fast.

Golden Delicious can be awesome, it gets maligned mainly by the far too early picking done on the commercial ones. I don’t have GD but I have a couple russet sports and they are some of my favorite varieties. 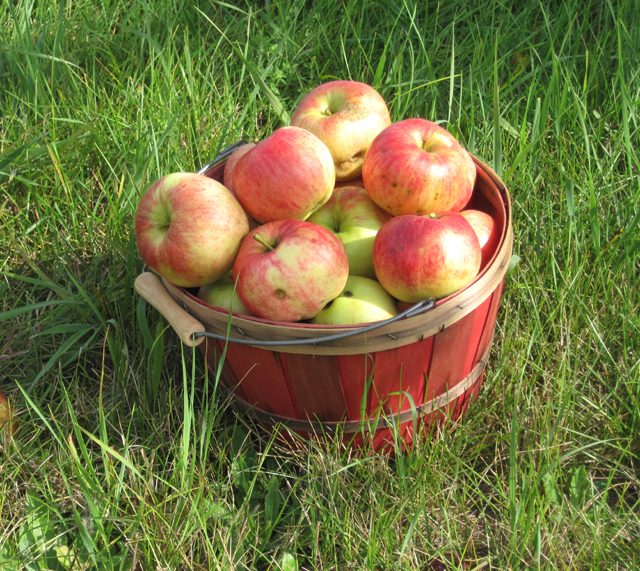 Dudley Winter - 4 to 8 oz rather sour but great if it’s all you have! Plus some wild apples, much appreciated this “short of fruit” year.

Here’s a quick pic of a few we picked the other night. All of the apples have russeting–some more than others. I love the flavor that the russeting imparts. 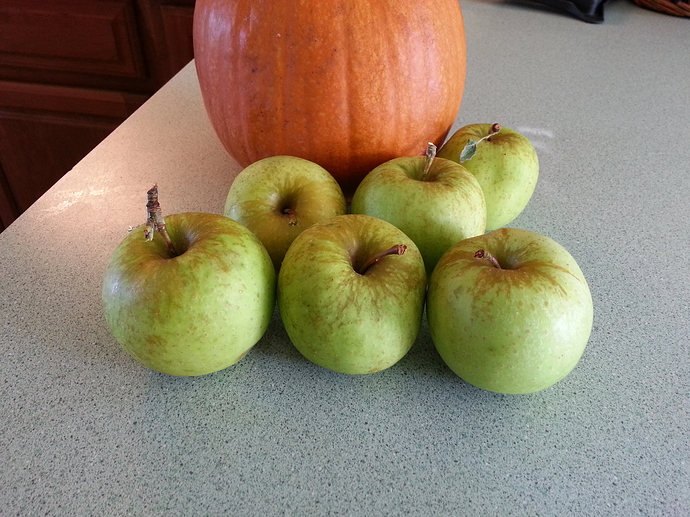 @scottfsmith Am very interested in your Hunge reports, hope you report again after you think you’ve eaten one at its peak. I used Hunge this Spring for eight bark grafts on one very large limb of a big, old apple tree I’m topworking (or maybe it’s frameworking) for a friend.

@UnderDawgAl,
What variety are they? I have very similar looking mystery apples.

I am 99% certain that they are Golden Delicious. They certainly are good.

Ate a St. Edmunds Russet, Chestnut Crab, Red Baron today. SER was quite good, subscid with a firm pearlike texture, but hard to compete with Chestnut, measured one at 17 brix.

They do not have a classical conical shape of yellow delicious, but who knows…
Here are mine apples, they were ripe in the beginning of August. The taste is similar to Golden delicious and is quite good. I never liked store bought Golden Delicious though. Mine stay green when ripe, they get completely overripe when they get yellow. 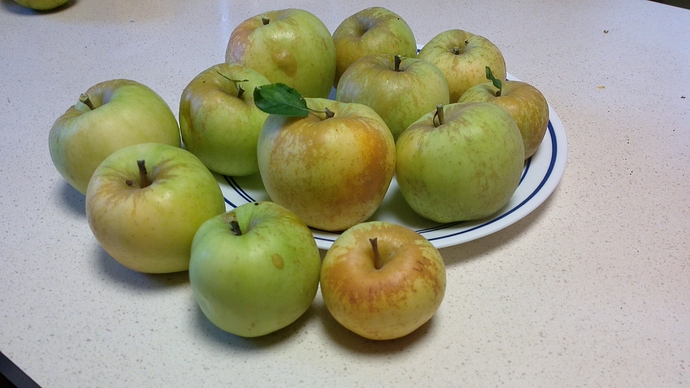 Are you telling me you grew those apples in the Deep South? They are flawless. Huzzah!

No Matt, they are from Nebraska, zone 5b.

antmary, those look just like mine. Heck, I don’t know what they are, but the tree shape fits the description in Tom Burford’s book, and the time of ripening matches up with the calendar for the orchards around here–hence, my guess.

We had friends over today to pick 15-20 pounds of them. We all ate a few off the tree while picking. I’ve been missing out all these years on tasting real apples.

I just picked a king david off my 2nd leaf tree on G-222. It was very tart and not much sweet. Overall, the flavor was lacking. I ate it because it was what I had, but I can’t see getting motivated to gobble these up if I had a bunch, or other options. I was really expecting greatness based on the comments by others including applenut out in CA. He has mentioned that his are dark red and ripen really late in oct and nov, and he is in a hot area like mine, maybe even hotter, although drier. My specimen was a medium red on the sunny side. It fell off in my hand under almost no pressure. The seeds were fully dark brown and loose in there. Anyone else in the southeast having similar king david experiences? Maybe mine will improve as the tree ages. I still have liberty (coloring up pretty well), goldrush (getting a little yellow on the sunny side), and arkansas black (fully green still) hanging on the tree to look forward too.

Jonathan apples from U-pick orchard. They are sweet and sour, and are good for cooking.
Honeycrisps from the same orchard were really good too. 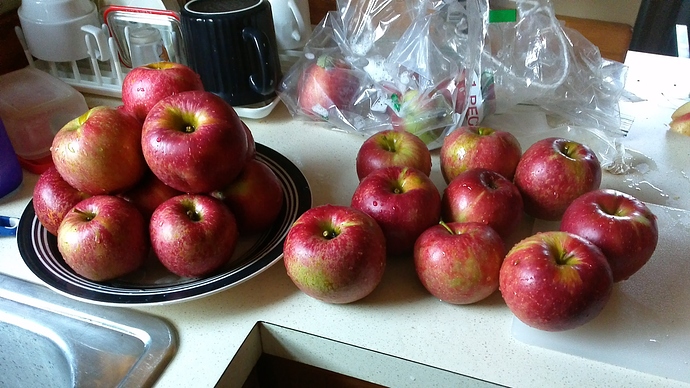 I was out on a country road today and I saw an apple tree in an hedgerow and stopped to, ya know, check it out. I wasn’t the first to do so; no fruit in easy reach, plus some poison oak all up in there. Another ‘very sweet but complex’ flavored unit with zero tartness…oooo, so good. That must have been the thing so many years ago in this area, 'cuz my rescue tree is like that but definitely not the same. Gotsta get some scions this Winter, like, ninja style. I put the ‘mal’ in Malus.
This makes three found trees that I’ve partaken of in the last 24 hours; one quite tart, two very sweet, all unknown. I might try to preserve some fruit for the Home Orchard Society major gathering (though, re: the tart one, I literally ate the last apple on the tree) . I also might meet up with an expert of theirs this Friday. It’s a pick day at the USDA repository in Corvallis (first visit for me) and the leader of the pack is a known seeker of ‘lost’ apple vars. I might be able to get samples to her. I also might see more types of apples in a day than most folk do in a lifetime.

Oh man. You’ll have so much fun at the Corvallis USDA repository. Taste everything you can get your hands on. Bring a notepad. You’ll have a blast.

Seedy if it has no tart whatsoever then its a “sweet” apple. They were once very popular for cooking but have pretty much vanished today. There are dozens of old sweet varieties that were popular. I am growing a bunch of them for cider, most cider apples are too tart and you will get a juice with too low a pH if you don’t add some sweet apples.

I really should plan ahead and take a bag for myself. I guess there is a tasting day and a cider-pressing day coming up at HOS HQ but I can probably snag a few pour moi. Also, (probably too late) there evidently is a Hazelnut picking day at the Repos just to clear away the nuts, and the staff even marks the best ones. Oooeee…I could make new friends with a hundred pounds of free hazelnuts.

Very interesting. I’m going to keep looking. I see essentially abandoned trees all the time around here. Some are pest and disease magnets, and sometimes those disappear (??). Others seem to be fairly free of problems. I hope to collect up some scions this year now that I have room on good rootstocks.

Matt, I wasn’t sure if you were directing that toward me or antmary. If me, then the answer is more or less yes, if northern VA counts as the deep south!

For the record, I only sprayed my two trees about 5 times–each time with a mix of captan and spinosad. Next year, I’ll use Actara to see if I can get the plum curculios before they get the apples.