Which is the best low chill cherry for N. Florida? Zone 8b

I’m looking for a low maintenance, easy to grow and reliable cherry tree for pies and fresh eating (I like sweet and tart fruits).

I found low chill cherry trees on GrowOrganic: Minnie Royal, Royal Lee, Royal Crimson, Lapins and Stella. Which 2 would be good together or any other recommendations for 500 and lower chill hours?

Don’t waste your time. No one in Houston has successfully grown “low chill” cherries.

a low maintenance, easy to grow and reliable cherry tree

Thank you, I needed a good laugh today. Cherry trees are anything but low maintenance and easy to grow.

I do know a couple near me that has two cherries they do absolutely nothing to, not even net against birds. They get cherries every year. It blows my mind, as I know that’s the exception rather than the rule.

GrowOrganic shows Stella semi-dwarf needing 400 chill hours which is well below my 600 chill hours where I live in Bonifay, FL. If I decide to spend $25 and try it should I put the tree in evening shade during the summer 6 hours sun or full sun 10 hours?

Most chill hour maps put me around 600 but I found one site that put me at 200 chill hours (tomorrowsharvest.com chill hour map). I know it might change from year to year but that’s a big difference? Am I in 600+/- chill hours at Bonifay, FL 32425?

Sweet cherries aren’t successful in the humid south from posts I’ve seen of people who tried. You may have better luck with a sour cherry or the bush cherries

Thanks, I’ll look into those.

They are hybrids were developed by Dr. Meador in New Hampshire.

Fruit quality is poor, like a bad pie cherry. I ripped mine out.

Tried all the low chill cherries over the years. None bore fruit.

Grew Katy ; Goldkist Apricot and maybe two fruits a year. Ripped them out.

“Trialed Minnie Royal and Royal Lee for 4 years…they looked great every spring, suffered every summer and went dormant early every fall. The most cherries ever produced was 6. They simply can not take the heat and humidity of the Houston area. They do better with the heat if there’s little to no humidity”

I’m also in 8b North Central FL. It’s a bit of a zone push but you may want to check out Cherry of the Rio Grande, Eugenia involucrata and Barbados Cherry, Malpighia ******** if you haven’t already. I’m thinking we are just a bit too cold for either but with a little protection on the coldest nights they may work. Good luck!

Thanks, have you heard of anyone growing avocado in your area? Thought I could dwarf one in a winter green house but just started looking into it.

I’m growing cherry of the rio grande. Nice ornamental. In 7 years got only a hand full of “cherries.” As cold hardy as citrus. Grew a while back as well. Not enough fruit to worry about.

I think you would struggle with cherries. You also need to think about spraying and protecting the crop from birds. For sweet cherries you will need to spray for brown rot with a fungicide like Captan or Indar. Insects will attack the fruit so you will need an insecticide mixed in with the fungicide as well.

Tart cherries are easier and have much less trouble with brown rot. In some cases you may be able to get away with no spraying or very limited spraying. But I think in your conditions tart cherries would require some spraying for insects and cherry leaf spot.

Birds love cherries. In most cases you will need to use bird scare tape or net the tree ( nets are better but more costly and more work). You probably should look at some of the threads dealing with growing cherries under Eastern conditions. They talk in depth about the problems you will face. Here is a link to one of them.

Interesting sweet cherry article shown below. This article is interesting to us in Kansas because bacterial canker is a problem here as well like in the east. https://www.canr.msu.edu/uploads/files/Research_Center/NW_Mich_Hort/Training_Pruning_Varities/SweetCherryVarietiesEasternUS_2004.pdf “Sweet Cherry Varieties for Eastern U.S. By: Robert L. “Bob” Andersen, Professor of Horticulture, Dept. of Horticultural Sciences, N.Y.S.A.E.S., Cornell University, Geneva, NY 14456 Briners - Sweet cher…

I have had about the same luck with cherry of the rio grande. But a handful of fruit is more fruit than you would have had if you planted a low chill cherry. And the taste was actually good. I still have not given up. It took 4 to 5 years before it produced anything, and my hand full of fruit came this year. So maybe I will get that amount each year.

@figerama I do know a guy closer to you than me that grows cold hardy avocado. I don’t like them so haven’t tried. It’s possible but I think you would want to get the right variety and still may need some coddling on the coldest nights. But it’s definitely doable.

I’m just north of Gainesville, FL in 8B but not on the coast. You can measure your chill hours here:

I put in a Lapins Cherry and a Royale Crimson last year. They will be three this year. I messed up the transplant on my Royal Crimson and lost half the roots. It suffered, I nursed it back, and then canker got it. Burned out the canker will see if it lives long enough to give me some fruit.

My Lapins also suffered transplant shock for about two weeks. But has grown great every since. In my area we will just go over about 400 chill hours so I’m definitely pushing it. Hoping every now and then we get an extra cold winter.

From what I’ve read these low chill cherries have three problems. First the high humidity hurts pollination. Second you must spray (but that is true even for peach trees) for fungus. Third you have to get the chill. Pollination is the biggest obstacle because the humidity makes it harder. And Bees tend to go to other flowers before the cherry.

Now I will say this. We also put in a Barbados Cherry. Got a lot of Cherries first year in ground. Grows very well. Tastes isn’t really good. But it blooms for like 9 months so it was a good bee attractor. Well something was pollinating them. Problem is we lost it during the first short freeze of the year. I’m talking only maybe and hour or two at 32 degrees. You won’t be able to grow a Barbados except in a pot in zone 8b or up. And the fruit isn’t worth it. Three seeds, uggh.

Back to my sweet cherries. I planted mine in full sun. And yea they don’t like the heat at peak of summer either. Leaves wilt like every day. Though the trees as they got stronger seemed to endure it better. The lapins was doing very well. Also the June Bugs were a huge problem. They loved the leaves. So you have to deal with those as well.

Fungus started to set in. Captan worked well to control it. I’m going to rotate Captan and Chorlliphil something and spray every two weeks. If you grow peach trees you can deal with the cherry fungus issues as well. Pretty much the same.

In your zone as long as you are far enough away from the coast you should get the chill hours. I have hope of getting cherries but everything I’ve read says it probably won’t work. But I do baby my trees.

The other thing I’ve read is not to give Nitrogen to cherry trees. Too much nitrogen and they won’t fruit. I think A LOT of people make this mistake. I’m only going to do seaweed and kelp so that there isn’t much nitrogen given. I do keep the area around the tree mulched. And I dunno when I painted the trunks white the trees seemed to respond pretty well to that. Will probably add another coat this year. It really does help keep them a bit cooler.

Sucks that the lowest of my low chill got damaged so bad. I will probably add another Royal Crimson or add one of each of the Minnie and Royal so that I have good pollination potential. I also have one son that doesn’t mind hand pollinating. Only time will tell.

But if I can’t get them to fruit probably no one will. Put a lot into them so far.

For sour cherries I"m looking into this 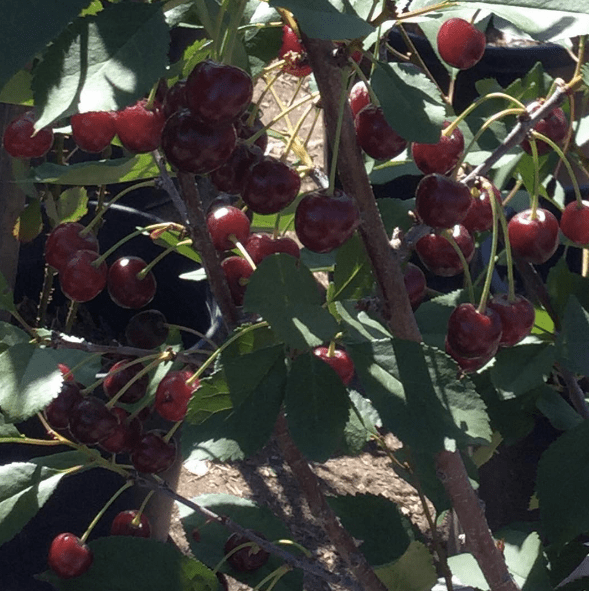 Seems like this could grow about anywhere. Not sure how it compares to what we usually think of as a sour or tart cherry here in America. But this is the most interesting thing I"ve found so far in terms of a viable southern sour cherry. I just want a pie cherry.

I will keep you guys posted on my low chill cherry results from North FL. I’m at the southern edge of 8b in the Alachua area. We’ve had about 193 hours between 32 and 45 degrees F so far. So I should hit the minimum chill requirment of 200 and 400 hours. We will see. I figure if I get a few cherries this year it will only get better once the trees get bigger with more blooms.

Also when you water your trees do not spray them with water on their leaves. This will help pollination chances and minimize fungus.

Thanks so much for your input, please keep me posted, good luck. And I love me some cherry pies as well.

Persia (Iran) and California both have Mediterranean type climates very different than Florida. When you look at Mediterranean fruits like morus migra, pomegranates, apricots and figs you never hear good reports about their performance in the humid south except for certain figs.

It kills me that people come on here where the nice lady clearly asks about growing cherry in North FLORIDA 8b <----- and they tell what won’t grow in Texas or what will grow in California… I live in 8b (blountstown) have property in Chipley and Woodville as well. I would love to grow cherries I ate them at a neighbor’s house in Arkansas as a kid. I have tried black Tartarian and lapin as a novice arborist a couple years ago and they died. I blame myself, despite having much better luck with other fruit trees. I have FUYU (na) persimmons, I have kumquats, date palms, figs, granny smith apples, Anna apples, Florida king peaches (which i have never gotten to produce) several types of blueberries, banana trees, pomegranate, Meyer Lemon, Satsumas, and a few grape varieties (some that i was told won’t grow here). I was considering trying cherries here again, I did a lot of research and had heard that if you plant them on a mound of soil on top of the ground you may be able to get them to grow and produce here and be happy. I was going to make a big mound of the type of soil they prefer and plant them on this amended soil on top of the sandy soil that I have in my Chipley location in one of the higher elevation parts of Washington county If I am able to afford it this year. If there are others in 8b FLORIDA who are actually planting I would be interested in hearing their process of planting and their results. I will share mine as I go, I just found this site and signed up for this post.

I canceled the Royal Crimson Cherry and decided not to grow peaches since they might take more work to keep alive then I willing to give them, I can live without them.

I know without a picture it hard to tell but, I’m A Dude.