This volunteer white flowering plant appeared in my perennial plot. Can anyone tell me what it is? I noticed it last fall growing in some hens-chicks I’d purchased, and which weren’t doing all that great. So I thought I’d let it go and see what it was, assuming it a local weed/wildflower of some kind. It was just a small plant. To my surprise this is what it became. I’m guessing it came with the hens-chicks, or maybe via bird. It certainly is hardy and early blooming (our apples are just now in full bloom). Rather a nice surprise. Sue 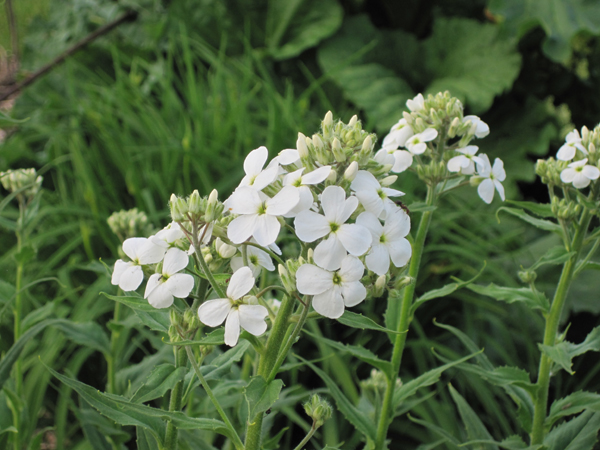 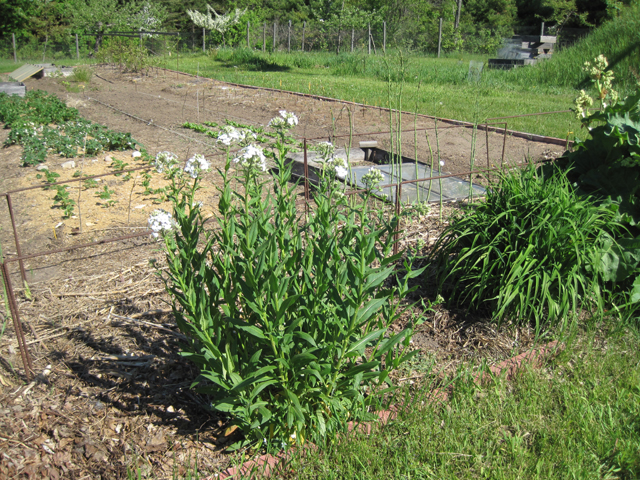 Looks like phlox to me. The hardy, semi wild kind.

Phlox was my first impression.

It’s called dames rocket. It looks very similar to plox but leaves are alternate rather than opposite, toothed rather than smooth, and flowers have 4 petals rather than 5. The flowers can be white, pink, or purple.

It is becoming a very invasive plant in the U.S. and is native to Eurasia. Some states like Connecticut and Massachusetts have made it illegal to grow or transplant. It is restricted in Wisconsin for having the potential to cause significant environmental or economic harm.

If you like it but don’t want it to spread much then be careful about letting it go to seed.
One thing I do like about them, though, is that the flowers are edible and quite tasty and flavorful (for a flower).

They’re all over the place here in MN, we have purple and white ones blooming in large swaths right now. The paper just did an article about how they are not native and people should not be planting them. I think they’re lovely, and I’m sure the pollinators appreciate them.

Thanks! Yes, that’s it - Dame’s Rocket. I do have a young tall phlox coming along nearby so it will be interesting to see their similarities and differences later on. I like this one for its early bloom - a large bumble was having a great time when i took the photo.Plus it handled the 24 deg freeze earlier in the week just fine. Looks like it’s a keeper for me. Sue

I guess this is not phlox either. I found it growing in my yard.