Who let the Figs out!

I did bordeaux spray today. I want to follow that up with oil a day or two later (overkill, perhaps). My thought is the oil (lime/sulfur oil bonide spray) will help seal it all in. Maybe I’m wrong.

I always try to give my lilacs a little lime/sulfur. It seems to help with powdery mildew.

I always try to give my lilacs a little lime/sulfur. It seems to help with powdery mildew.

Yeah I had that last year. I use lime sulfur on all of them in the fall, and copper with Nu film in the spring. In the spring with a low dose of lime sulfur and nu film I hit my grapes. I have had fungal issues with them. Spraying works 100%. One year I had clusters half covered with some kind of fungus. Spraying with lime-sulfur stopped it in it’s tracks and the rest of the clusters made it. Impressive!

Speaking of problems one the guavas looked very yellow. Appeared to be over watered to me. Came that way. It looked the same for days, but seems to be recovering now.

I have an unknown pluot seedling that started to leaf out so I moved it from the garage to the porch and have been bringing it in at night. I’m going to attempt some small grafts on it. 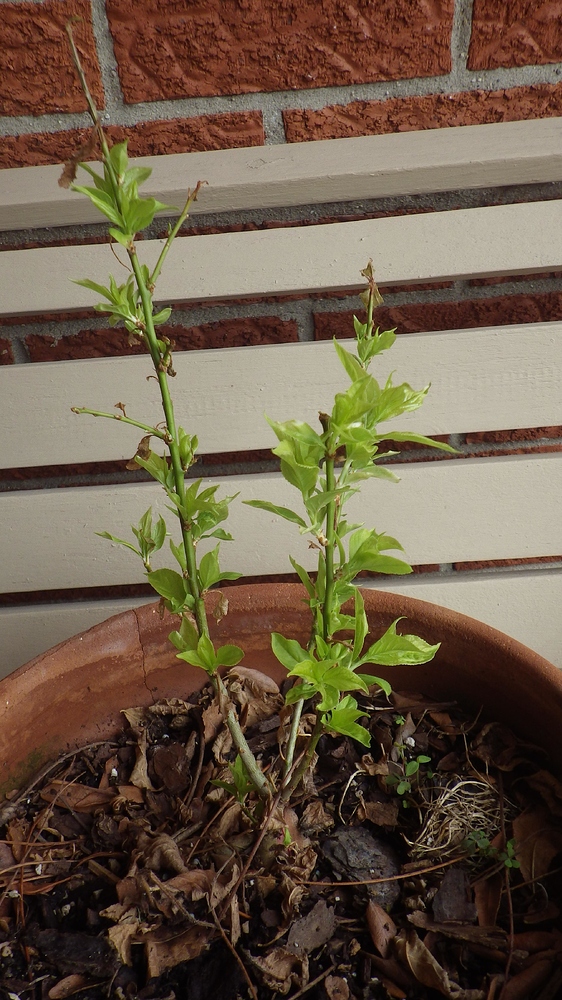 Mine has to wait one more week before they can go to summer camp.
My due date @is usely April 15. Some are still in the garage.These tree’s look different come summer. 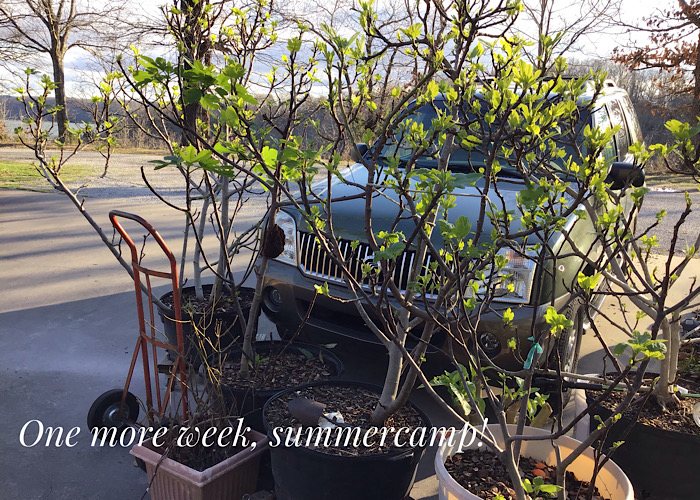 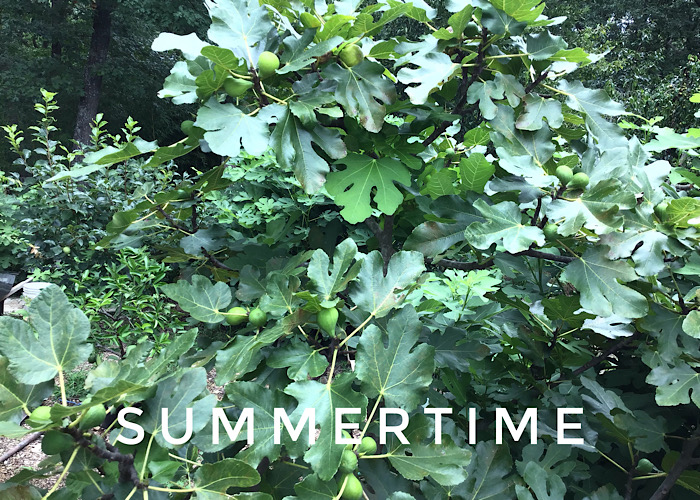 Mine are outside for last few days. 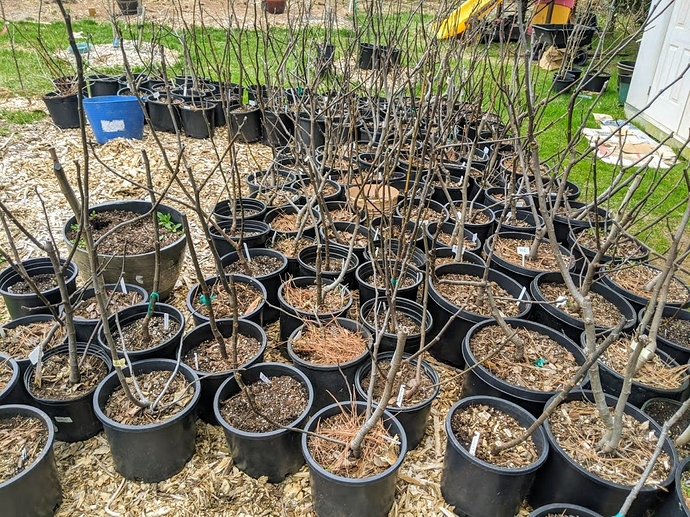 I know, the solution is netting. But I had to dispatch 2 squirrels last summer who got themselves wrapped up terribly in the netting…

I am just starting to get into figs and I only have 2. I have had them out on warm days but took them in a night or 2 here and there if the temps were going to dip to the low 30’s just in case. I have one with green tips and the other is quite a bit smaller but pushing some tiny leaves now.

Great to see how everyone has their figs. I don’t know about pot size or what to expect for them to look like in a pot but these pics are giving me an idea now

Some pics of my figs 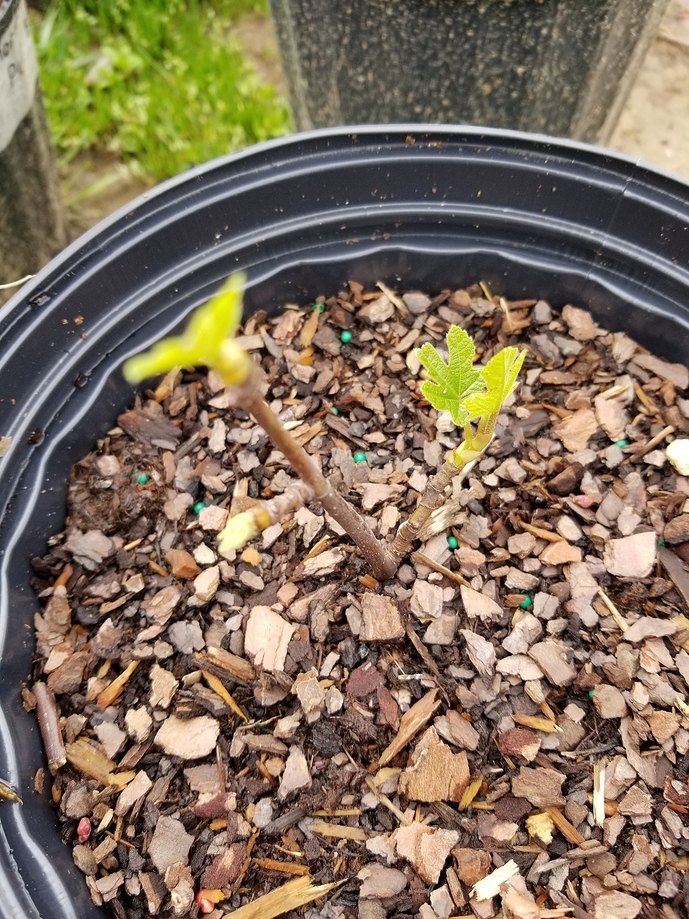 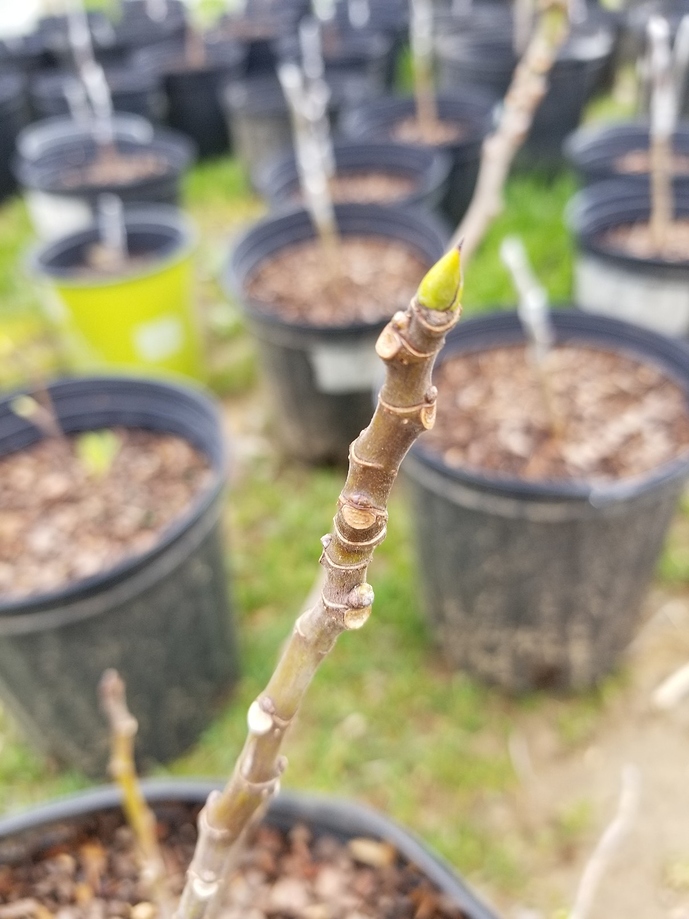 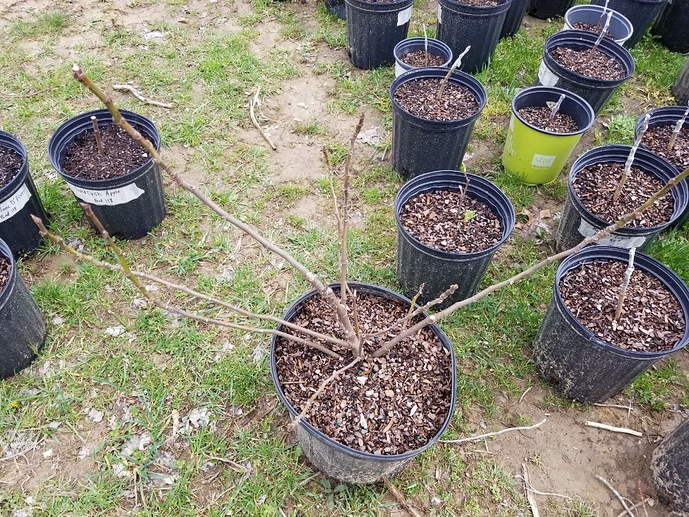 @tonyOmahaz5,
7 days later with artificial lighting 12 hours a days in an unfinished basement. 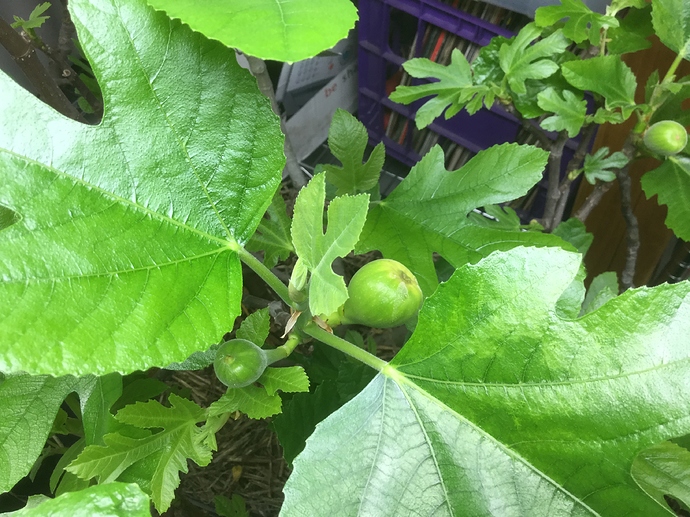 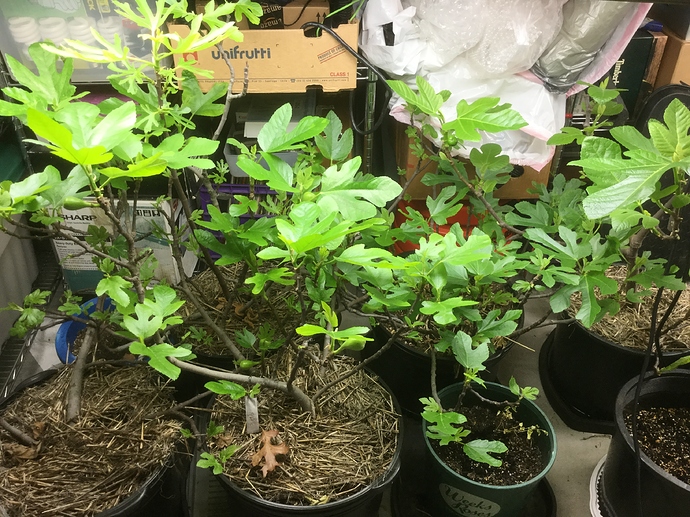 I will have to move them back in on Thursday evening. Friday Am rain and ice and at night is dropping down to 24
Degrees. Oh well more exercise for me outdoor instead of lifting weight.

Tony
My figs in the garage will be out on the driveway today.

Figs in the basement have grown so much. Can’t move them but until much later.
My husband took these pics comparing to his hand and thumb to them.
The hand was with Improved Celeste.
The thumb was with Drops of Gold.
. 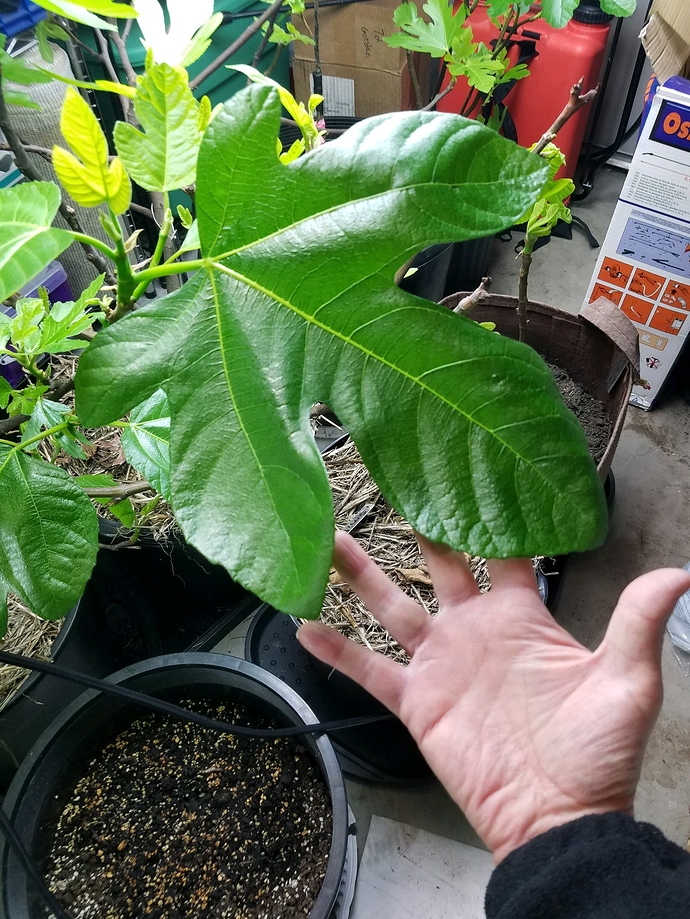 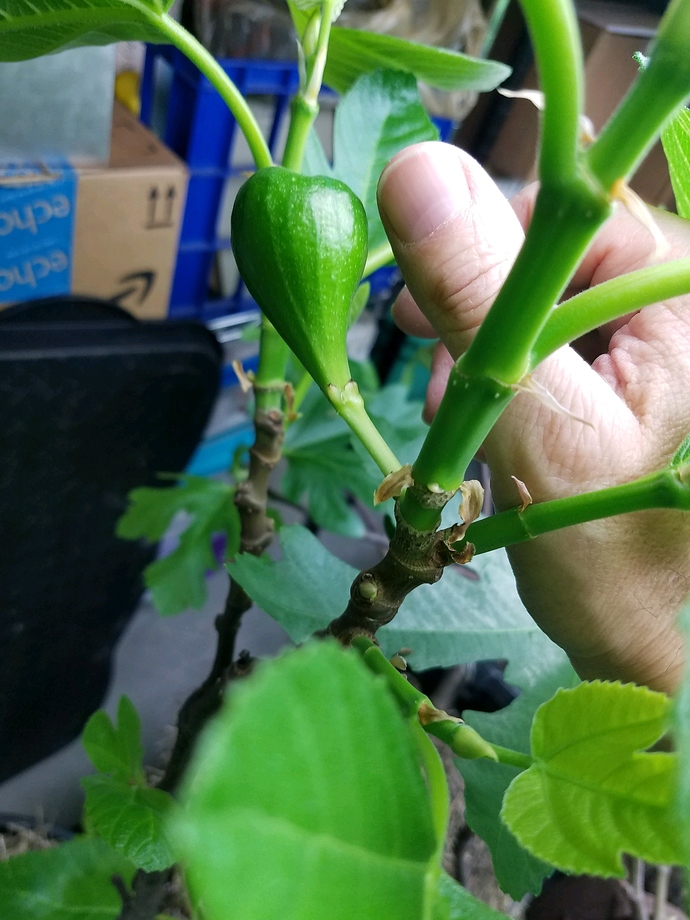 Yours are much further along than mine. I’m still dragging pots out. I did about 2/3rds yesterday.

Does anyone do any significant pruning on their potted figs when setting them out?

When do you start fertilizing? I generally wait until leaves are half-full and night time temps are in the 50’s

My potted figs were back to the shelter for 2 days now. I will bring them back out on monday. A warning trends in the 60s to 70s again. Hopefully this will be the last musical chairs.

I usely prune heavy when uppotting/repotting, fertilizing when fig are just starting coming out of dormancy.

I finally moved the outside today, @tonyOmahaz5. I should have taken a picture but I was too exhausted. About 100 figs in pots and ten persimmons. I need to cut back.

The Northeast is a little cooler this year than the Midwest. We got great weather the last few weeks.

No kidding, the coolest, worst spring since I moved to Delaware in 2011…

I’m down to just 3 plants to take out and looking at the upcoming weather here in SE Michigan it appears we are expecting to drop to 30 degrees and get snow Friday going into Saturday.

Think I can get away with just moving things into an unheated garage instead of through the house and back down into the basement?

If they have not leafed out much, they should be fine.