I’ve been interested in the Geraldi mulberry for a while, hoping I could make other mulberries dwarf.

As this pic from last year shows, it doesn’t. New grafts from 3 varieties grew 5-10’ in the first year, while the Gerardi only grew to 5-6’ in 6 years. 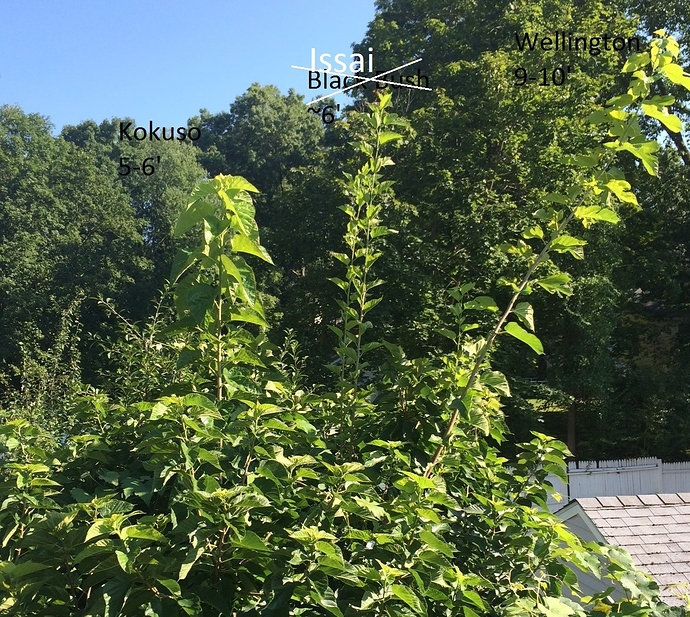 So, this spring, when examining grafts, I noticed something interesting. The Gerardi is chock full of flowers/fruit. I vaugely recall it having quite a bit last year, but I never paid enough attention to see how it compares to the other varieties.

What I found:
1.) Gerardi has many more flowers/foot.
2.) The flower density varies for the other cultivars as well, particularly on the basis of:

I measured how many fruit were within a length of 3 cell phones (later found to be 15"):

I measured several branches on each, though I didn’t have the patience to do more than 2 on the Gerardi. I was going to have to take off my shoes to count any higher…

This pic is of the Gerardi. I didn’t take counts from any of the others grafted onto it, under the hypothesis that the low yield may be due to the the others being new grafts. But the Kokuso and Oscar stats come from established trees ( 2013) and a IE graft from 2014. 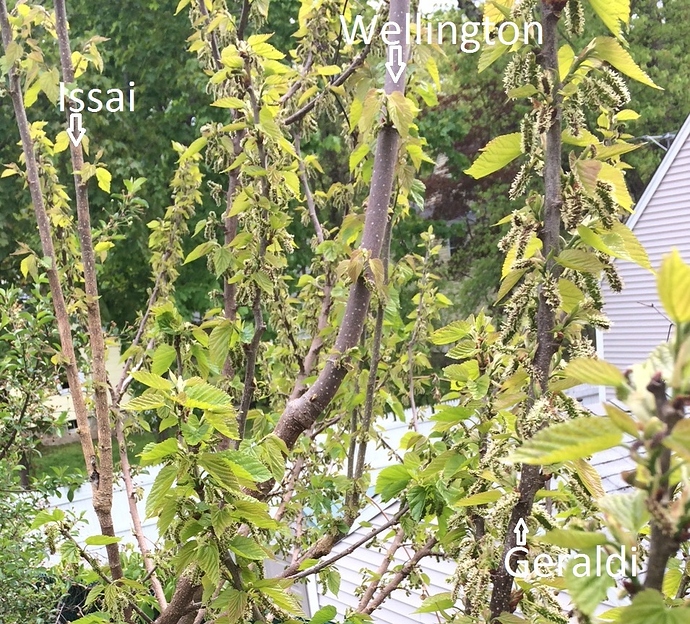 One would think that all this would be something I notice in the fruit yields. But in truth, I get very little fruit- only the birds know how much each tree makes.

But, if one was to net the trees, Gerardi is better in 2 ways- more fruit per volume and it stays small enough to fit under a net. From my recollection, it doesn’t taste as good as Oscar though (not very space efficient, with fewer fruit per node and more space between nodes). Maybe I need a really sunny year where the tree gets enough energy to make the huge number of fruits sweet enough…

What does PGR mean?

What does PGR mean?

Something about plant hormones, short internodes and slow growth causes the plants to make more fruiting buds. My dwarf Pixie apricot also have short internodes and it had an amazing amount of flowerbuds this spring (all froze and died, so no fruits). Maybe you should try to thin the fruits to let them get more sugars?

Do you mean a chemical was applied when it was grafted? I planted it in 2011 from Whitman farms, so I would think the impact of anything from then would have worn off. Much of the fruit you see is on wood which was grown in 2016.

Maybe you should try to thin the fruits to let them get more sugars?

That’s an interesting thought, but I get very few of them, with the birds eating 95%+. I’d just be making tastier bird food. Maybe I can net a couple branches and thin one of them?

I don’t understand how a growth regulator could forever alter the genetics of a plant cultivar. Maybe this is some science I am not familiar with.

I have come to find that mulberries taste best when there is a dry rainless stretch for several days around ripening time. Rain around picking time dilluted the flavor.

Maybe I can net a couple branches and thin one of them?

I think that thinning just 1-2 branches might not work, because the plant may still be overloaded. I would thin the whole tree (it is small, right?) and I would cover a couple of brunches for protection if you cannot cover the whole tree.

gerardi’s bear the most berries per unit size of tree(and per unit length of branches) ime.
the “everbearing(faux) nigra” seems to bear more densely, but berries are smaller.

it is small, right?

Small is relative. It’s not a 3x3x3’ bush like some of my honeyberries or currants. A dense 6x6x6’ bush (like Gerardi) has about 10X the volume as one of those. And there are a lot of fruits to thin

I think that thinning just 1-2 branches might not work, because the plant may still be overloaded. I would thin the whole tree (it is small, right?) and I would cover a couple of brunches for protection if you cannot cover the whole tree.

I may put that on my someday project list. Mulberries are nice forage, but I don’t see myself going to the effort of protecting them, let alone thinning them on a regular basis. So while I’m curious, even if thinning made them similar to Oscar (sweet, decent eating), I doubt I would regularly do it.

This year, maybe I’ll try to protect a branch to establish a baseline and get a better sample of the fruit when it is really ripe. In the past, I’ve often had some lighter spots on it still, in order to find one the birds didn’t eat.

@BobVance, no. I mean a PGR could have been applied when the scionwood was first propagated from seed.

I’ve been interested in the Geraldi mulberry for a while, hoping I could make other mulberries dwarf.

You grafted various mulberry varieties onto Geraldi rootstock. Did you graft Geraldi scion onto a fast growing mulberry to observe the effect?

. Did you graft Geraldi scion onto a fast growing mulberry to observe the effect

perhaps @BobVance has a different answer, but afaik burntridge and whitmanfarms grafts theirs to regular russian albas(which are fast-growing), but seems to have no boosting effect on gerardi’s laggard growth

You grafted various mulberry varieties onto Geraldi rootstock. Did you graft Geraldi scion onto a fast growing mulberry to observe the effect?

I’m not sure what the rootstock is, but I haven’t tried grafting it onto any fast growing mulberries. I was trying to make better varieties grow slower, not make more of a berry I’m not super fond of.

But, now that I’m looking at it, it wouldn’t hurt to toss a Gerardi onto one of the other trees and see how it does. I think I have some wood left, so I’ll do that once the heat breaks this week.

@BobVance, no. I mean a PGR could have been applied when the scionwood was first propagated from seed.

You mean when the original Gerardi seed was planted? Do PGRs change the genetic structure?

You mean when the original Gerardi seed was planted?

What I was referring to was the application of a PGR to a population of mulberry seeds during germination. Then after planting, a selection is made.

Do PGRs change the genetic structure?

In the process described above, PGRs can have significant effect on phenotype.

It will be interesting if somebody root Gerardi cuttings and then graft on them the other mulberries. If Gerardi’s own roots grow as slowly as tops it should be a perfect dwarfing rootstock. It looks like Gerardi as intersterm does not work well.

To followup on this thread, the mulberry is becoming a monster. It seems that grafting other varieties on has produced a tree which is growing in all directions at a rate I can’t contain. It’s now up over 12’ and 12’+ wide (not a good thing when it is in a row with 5’ spacing…

I hacked it back in one dimension already to protect my jujubes (they rank far higher than mulberries with me), but have waited until winter for the rest. 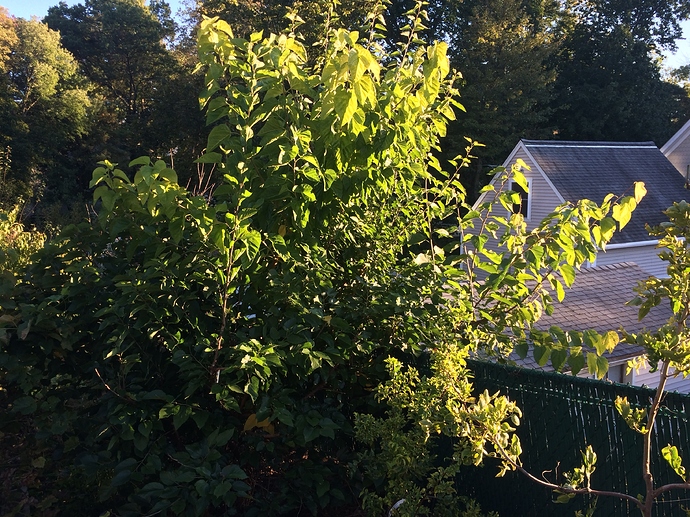 So, I’m going to remove all the non-Geraldi from the tree this winter.
Hopefully that will let it stay contained, as it used to be before I added the other varieties. If anyone wants scionwood, I’ll have it coming out my ears this winter.

Any size is available, even 1.5" thick 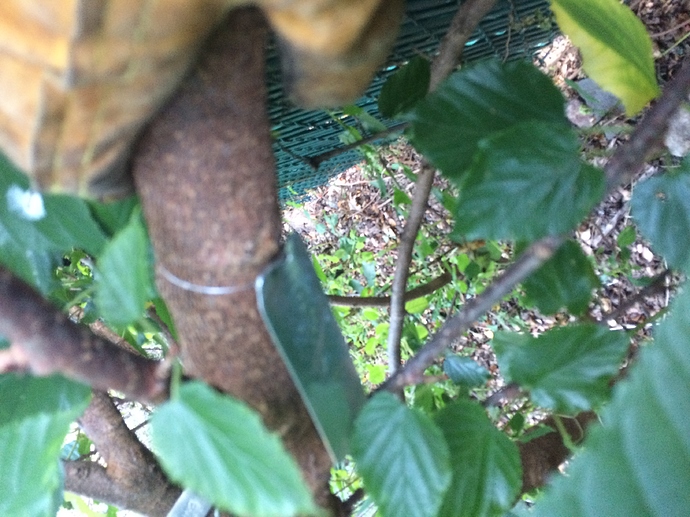 Another year, and another update to this thread…

Even though I cut them back to a few inches this past winter, the grafts on the Geraldi have continued to grow wild. When I noticed that it was shading a tree 2 rows over (a heavily laden Golden Russet apple), it was time for more significant pruning. 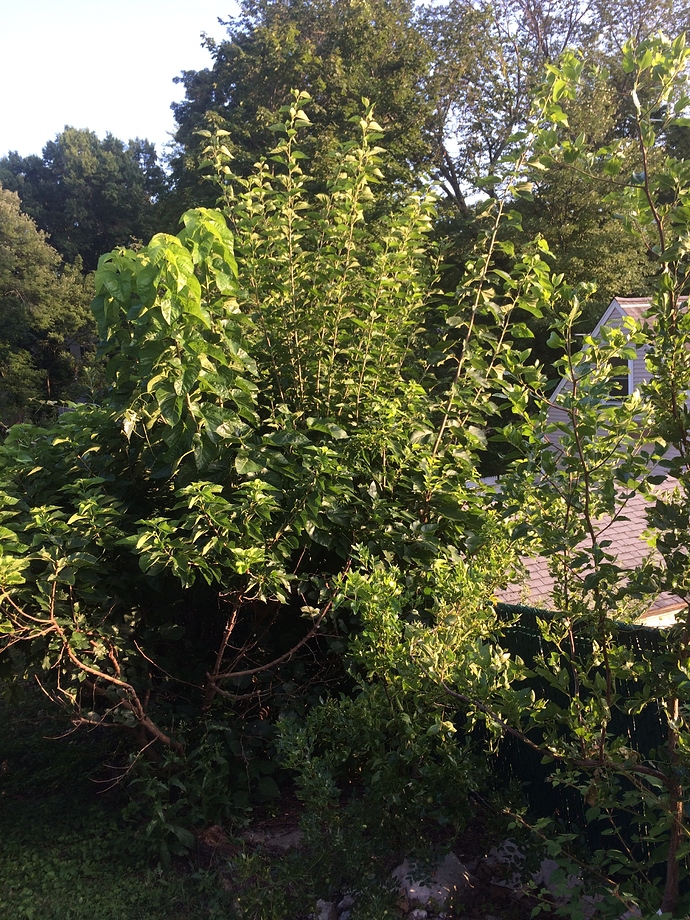 So, this time, rather than cutting it a few inches above the grafts, I cut below them. Now, there are no other varieties grafted on. It’s a pure Geraldi, other than the rootstock. For the first time, I saw a small branch coming up from near the ground and noted that it has different leaves, so this wasn’t grown on its own roots. That means that the Geraldi should be dwarf no matter what it is grown on. I kind of expected this based on other varieties not being dwarfed when grafted on Geraldi, but this is good confirmation.

The rootstock (lobed leaves, rather than mostly round): 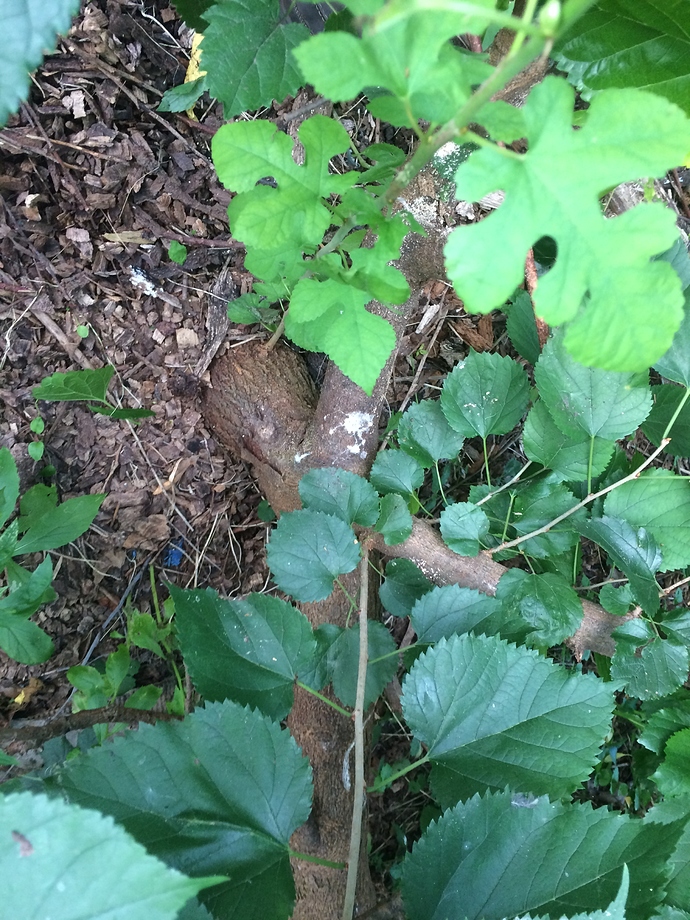 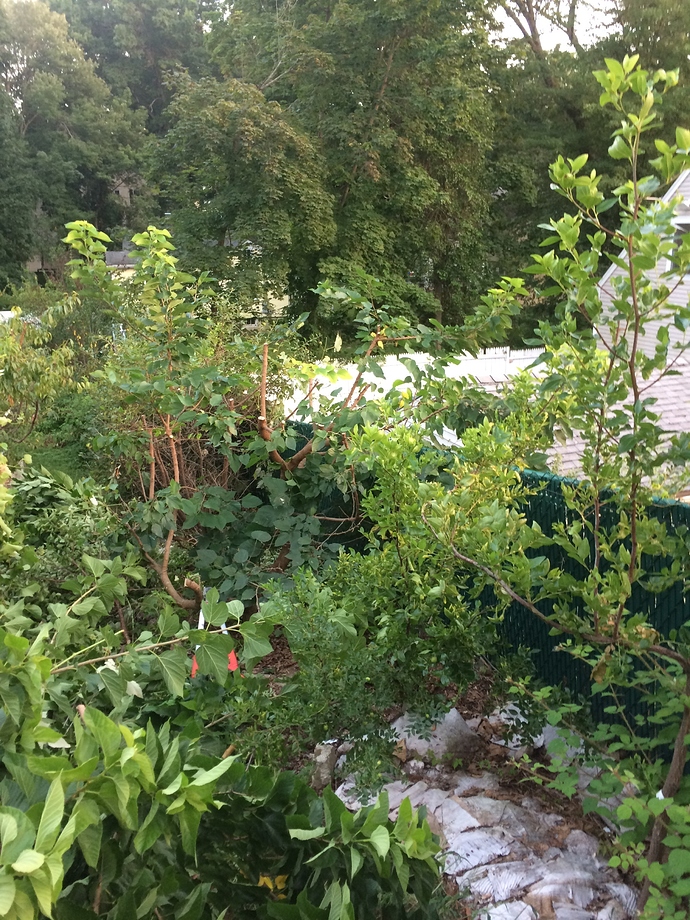 That means that the Geraldi should be dwarf no matter what it is grown on.

That’s good news for me since I grafted the Geraldi scion from you unto a Russian rootstock. I bought some from Burntridge. I would like to keep it small. I got everything to take except the Taiwan wood, the rootstock died on me, it was not from Burntridge. I got all the scion to take I tried (except the Taiwan wood) and had ton’s left so I stuck them in a pot. About 10 extra pieces from you. Most just died but 2 did root. I took them and planted them out at my cottage. Not much light there, but plenty of room for them at least. I have no idea what rooted, and if they are the same or not? It appears it is possible to root mulberry cuttings. This is the 3rd time it has worked for me. Low percentage of takes, but some takes all the same.

I’d like to know more about this process. If the result is phenotypical then at what point does it transfer to a change in genotype and shown in subsequent generations? What are some good sources for this information?