Here is a recent find from my farm in Ohio. It is an average to smaller nut, but it has a thin shell and cracks out some halves without too much effort. Some of the early nuts were not filled well, which allowed them to be cracked out whole. I’m keeping my eye on the tree to see how the rest of the nuts look as the harvest progresses. It has been a wetter than normal year and the tree has been partially defoliated by leaf fungus, so this may contribute to some poorly filled nuts. 105 nuts per lb and 40% kernel. 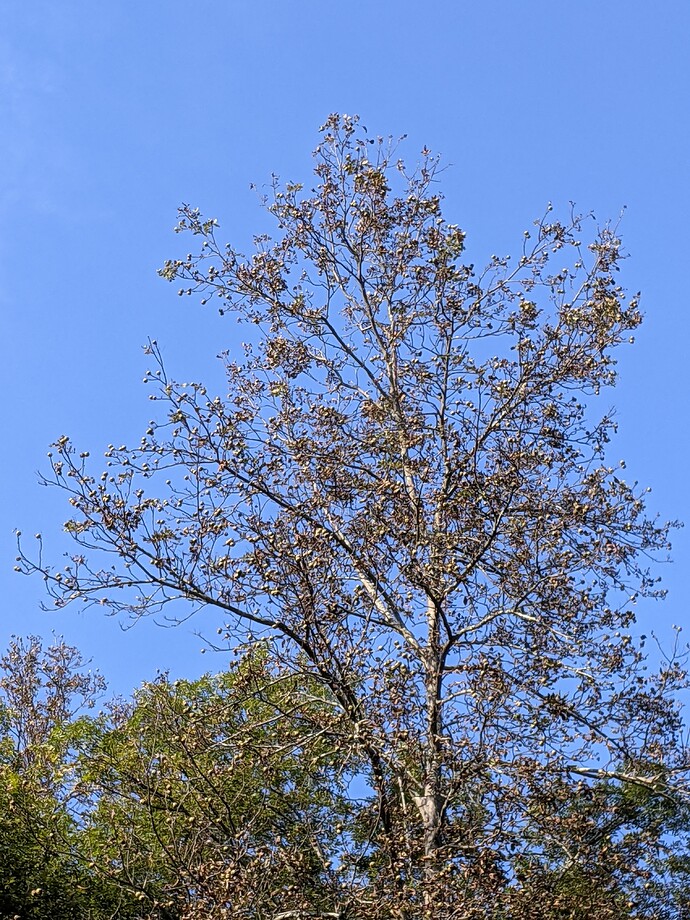 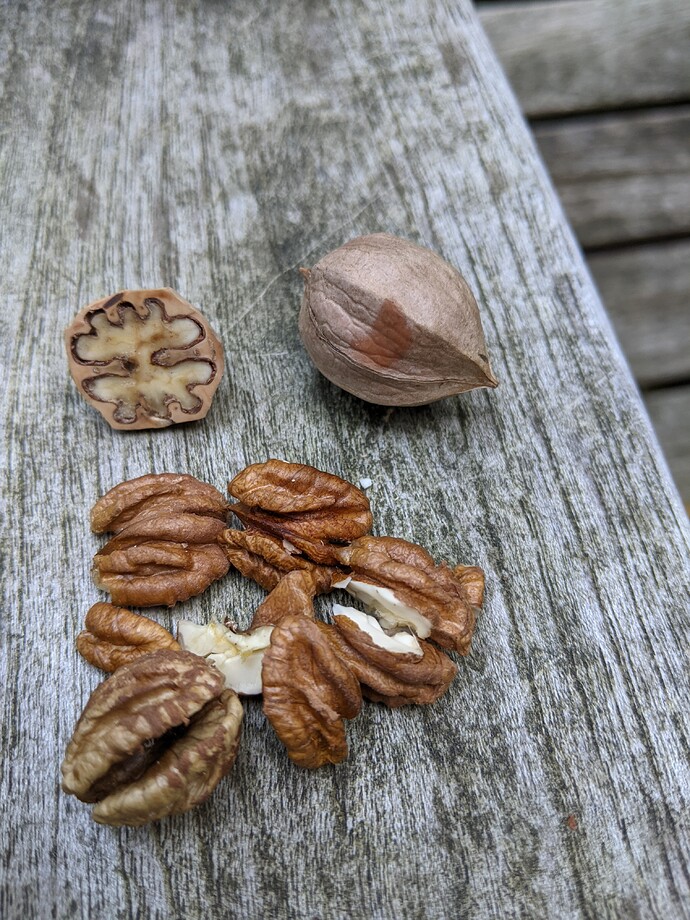 I have a Red Hickory in my field, and several Pig Nut trees (all over my place). At my MIL a nice Mockernut Hickory.

I fished a local river this weekend and noticed several hickory trees that were at least partially over the river, that were dropping nuts like crazy… one was a nice Shag Bark and the nuts were huge. I collected one and the outer husk came off easily revealing a very nice looking nut inside (looks pretty much just like yours above). Just now remembered it, it is in my fishing vest. I am going to crack it and see what it looks like.

Well mine did not crack out as nicely as yours… but it tasted excellent.

Especially since I pulled mine out of the river… perhaps some dry/cure time would help the cracking turn out better.

It’s rare to find a hickory that cracks out in half’s like that .
Looks like a good find .

Could be a “hican”

Not a hican.
From that cross-section, I wouldn’t have been all that optimistic, but the proof is in the pudding! Looks like it really cracks out well!

Good size shagbark hickory nut with a smooth cavity. The shell isn’t very thin, but it cracks out some halves. Tree appears to be somewhat resistant to anthracnose, retaining its leaves late in the season. 84 nuts per lb and 32% kernel. A wild selection from eastern Ohio. 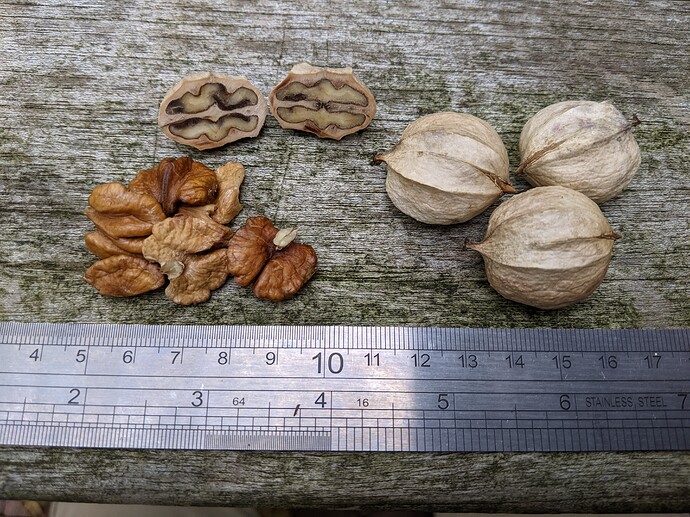 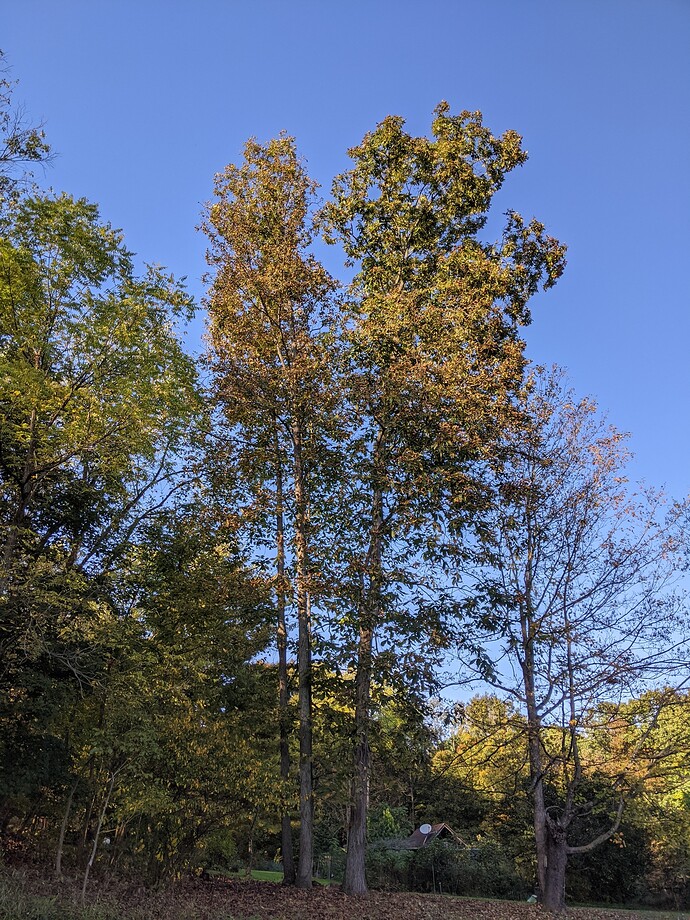 A less impressive but respectable hickory that consistently cracks out quarters growing on a healthy tree that appears to be resistant to anthracnose. 90 nuts per lb and 34% kernel. 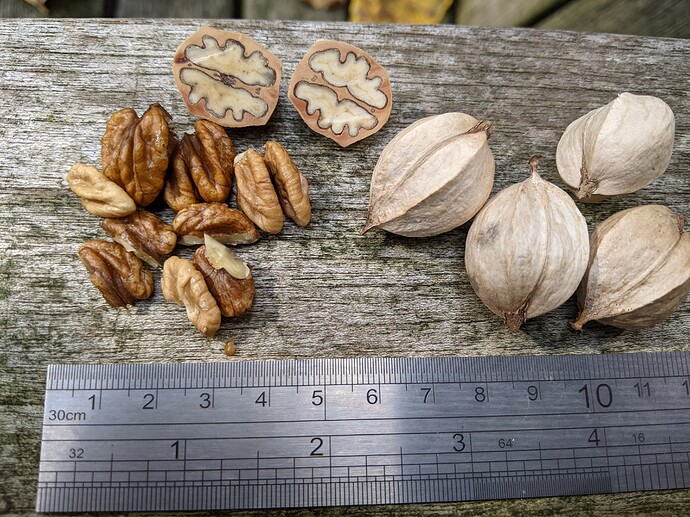 Tie a ribbon on that tree it’s a gift and so you can find it for grafting wood ! @Barkslip this variety looks valuable to me but I’m not an expert on these what do you think?

I think the kernel shape or cavity shape is pretty awesome looking. I wonder what the nuts crack like after they’ve dried for a month. I’d like to know the cracking % after that, thanks.

Nice (LITTLE) shagbark nut. Most are, unfortunately so…