Will Prime ARK Freedom be the first blackberry to ripen?

My PAF bloomed ahead of my Natchez and it sure looks to me like it will likely ripen well ahead. Looking forward to the taste test. Below is a few pictures taken this afternoon. 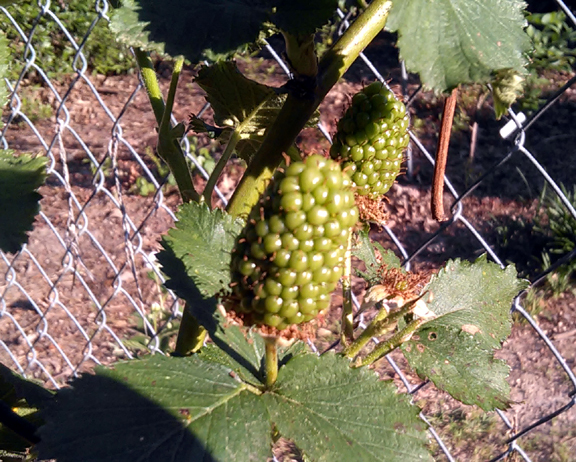 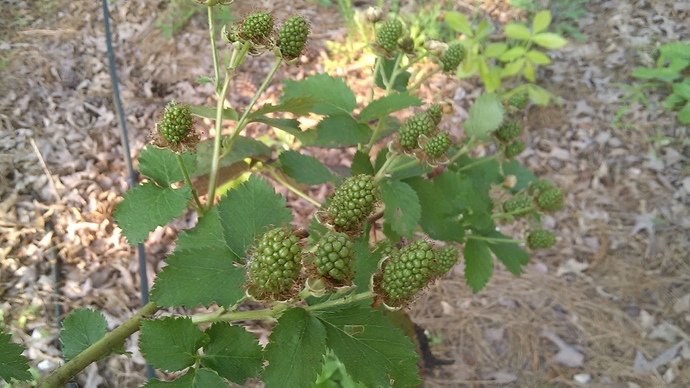 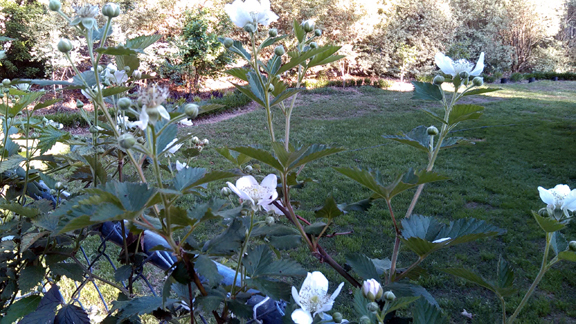 A testimony to how warm your Spring is compared to mine

Is that nice looking, spacious, wide open yard yours or the neighbor’s, Bill?

The first of my PAF are starting to show color. They still have a bit to go before they’re ripe enough to eat. I hope they’re good because mine have been bug and disease magnets. I’m hoping the new canes are healthier. You can bet that I’m really looking forward to this crop! Yours look great!

We started picking wild blackberries from the yard a few days ago. I tried, but didn’t succeed, in eliminating them. There are still a few thickets where I don’t want them, though.

My PAF have also had some issues but I think especially with there complexity it will take me another season or two to decide if they will work for me. All my varieties have things about them that I’m not pleased with so I don’t have what I consider as a good alternative. If the PAF ripens two weeks earlier than the Natchez I see that as a big plus with pretty much avoiding the higher temps that damage some of my other varieties. Two weeks earlier also means less watering during the critical ripening period. Cane borers continue to be my single worst insect pest but this appears to be improving.

The fenced area is my back yard were Bugs likes to hang out. As of now she hasn’t been a problem around my fruit trees. A few days ago she was eating a large dandelion so I have been careful not to cut those. Bill

The few berries I have on my new Prime Ark Travelers planted in west central Louisiana are looking very similar to your photos above. I have read that Prime Ark Traveler floricane crop ripens a few days (2-3) ahead of Prime Ark Freedom so it may be another possibility for you.,

My blackberries eventually got cane and, more importantly, crown borers and crown gall. Now I’m trying some persimmons where they used to be.

Here are my PAF. I lost a lot of berries because they bloomed before the pollinators appeared. Still seems to be a fair crop. They are putting out new canes that are impressive in size. I’ve already had to tip most of them at 4-5 feet. I read somewhere that the canes need to be thinned to one every 8 inches. Does anyone really do this? 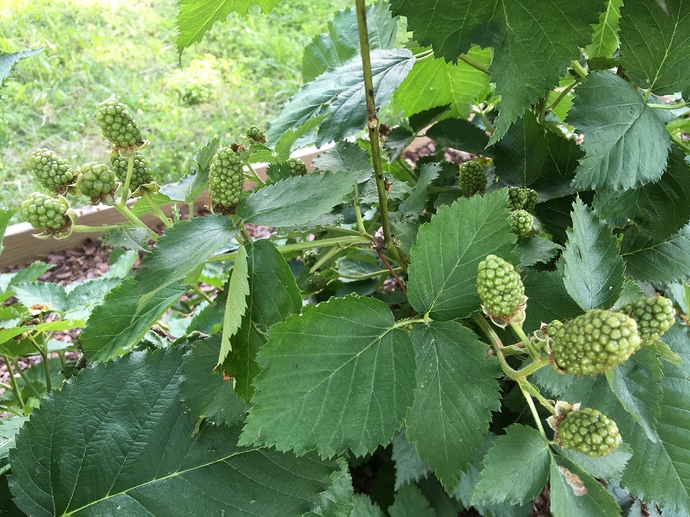 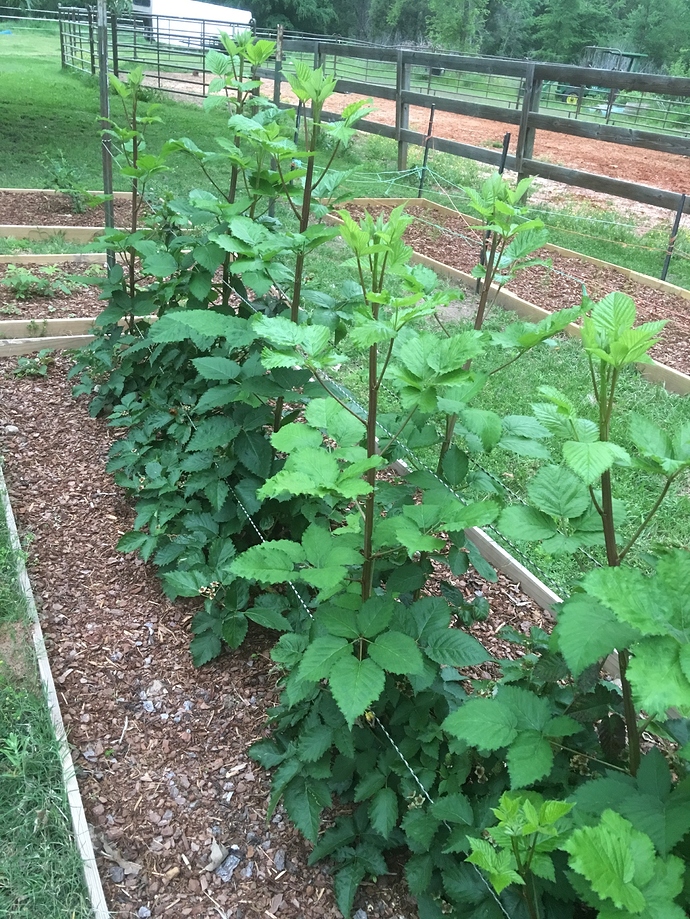 Katy, yours are looking really good, and healthy, too! They look so much better than my floricanes that are suffering from both rust and blossom and end blight. The only good thing I can say about that blight is that at least I’ve figured out what it is. The bad thing is that it appears there’s nothing I can do about it until this round has finished fruiting. Then those canes will be out of there in a flash! I’d have a heck of a lot more berries if it weren’t for that. It’s so frustrating to see the buds form and then dry up. Last year when it started, I thought it was the heat and drought causing the problem. At least I have a good set, anyway.

This year’s primocanes are FAT, strong, and appear disease free. Yea! Yes, they do get thinned so that they aren’t fighting each other for water and nutrients.

I also lost my earliest blooms and berries, but not for lack of pollinators. They were blooming and setting when the new year started. Freezes in January and February took out the earliest ones. I don’t think I would have had the rust problem if they’d gone dormant and lost their leaves. If they don’t drop them this year, I intend to strip them in December.

My first berries for the season are getting redder by the day. It won’t be too long before they are BLACKberries instead of red berries.

Thank you Muddy! My canes never went dormant either. Those leaves have just about dried up now and just leaving the healthy new growth. The new canes are FAT! It surprised me but I’ve never grown berries before. I have another “patch” of supposedly PAF but I suspect that it is something else as they are still blooming with only tiny newly set berries. If they have primocane berries this year then I guess they will have to be PAF but they are so different. (I bought them separately from different sources.) I’m jealous of yours getting red…I go out everyday and look but not yet.

I’m eager to know how they taste.
katy

Muddy/Katy. Just guessing but looks like your PAF will start ripening 2-3 ahead of me. Bill

If my plants ever get that thick I most likely will thin a little but I am still learning how to manage these and I’m not sure what the correct method is. Bill

I’m not sure what the correct method

I think each cultivar is different. For me I have had good luck keeping canes down to 5-8 canes per crown. I noticed that if you have too many canes berries are smaller. This might not be true for all cultivars? Simple physics, the crown and it’s roots have to support all canes. The more canes, the more available resources are split up. Remove say 20% of canes, the smaller ones, the ones that didn’t make full height etc. And resources are concentrated to existing canes. I don’t leave or remove a specific amount, I at least remove one or two canes, if not more from each crown.
I’m going to have a great blackberry year. Most all did well and are growing well right now.
I don’t have PAF, as you mention via observation you can figure out what pruning you need to do with this cultivar.

Bill, mine were tissue cultured plants that I set out last year. They never really thrived the way other members’ did. I thought it was our drought and extreme heat of last year that were causing their problems. On hindsight, it was more likely that those many cane borer strikes, which kept causing me to cut them back below the eggs or migrating larvae, both weakened them and created injuries that allowed the blossom and tip blight to get a foothold.

The new canes are stronger and healthier than the originals. Each plant has sent up from zero to eight new shoots. It’s odd, but one plant of the five originals that was never hit is the smallest of the lot. It looks healthy, but dinky in comparison to the others.

they are BLACKberries! Yes!! I expected see them starting to turn partially black, but I guess the 90 some degree weather probably helped speed those berries on their way. The first of them were completely colored up and losing their gloss today, Friday, April 29th. I’ll be picking those first few tomorrow.

For me, yes, the PAF are the first cultivated blackberries to ripen this year. They began ripening ~ one week after the initial wild blackberries. Barring loss to a sharp eyed bird, I’ll be munching on them by time most of you read this.

The only variety I have to compare with the PAF canes is Apache. The new Apache canes come up in the same vicinity as the floricanes. The PAF primocanes, on the other hand, start to come up much earlier and farther away from the floricanes. Mine have arisen up to 3 feet away from their mother canes this year. I’ve pinched some of them that managed to reach 6’ tall before I realized how rapidly they were growing. Because of that difference, I question whether such new growth is immediately connected to a shared crown with the PAF. I suppose that if I were curious enough about the answer, I could remove soil until I could see for myself. If I had a loose sand based soil, I’d be inclined to attempt to check it out. Since that area is hard clay, I’ll be leaving well enough alone.

The PAF fit some important characteristics that I’m looking for. They are early ripening, large, and the few I have tasted appear to be as good or better than my Arapaho, Natchez, and Apache. The cane borers continue to be my biggest obstacle in getting a dependable crop. I’m attempting to grow these organically so my approach might be much different than others. If you have ideas on dealing with the borers I would love to hear your methods.

Methods I’m trying
-I want a thick and narrow row of new canes each year so I can remove the swollen ones (cane borers) as I see them and have some remaining going into the winter.
-Last summer I had about six canes of Natchez with the familiar enlarge sections from borers. With a small drill bit I made a few holes in which I injected with Captain Jack. Most of these plants appear to be doing well but the real test will be in a few weeks. In past seasons these with damage just don’t mature the berries correctly. If this helps it would be a big help but only on a small scale.

Mine have arisen up to 3 feet away from their mother canes this year. I’ve pinched some of them that managed to reach 6’ tall before I realized how rapidly they were growing. Because of that difference, I question whether such new growth is immediately connected to a shared crown with the PAF.

It is connected but is a sucker, so thus a new crown. These are good to trade! Well when one isn’t patented!

If you have ideas on dealing with the borers I would love to hear your methods.

I have borers for the first time, and read that chemical control is not ideal. The advice from some University was just to remove all infected canes, even if all are infected. Remove all.

Bill, thought I’d let you know that I’ve been eating the PAF blackberries.

Birds got the first two. So, I wound up draping row cover over them and clipping it to the wires with clothes pins here and there to keep the winds from blowing it off. Makes picking a bit awkward.

Thanks for the update. Good to know your getting some berries after all the effort you put into these. I was looking at two of my PAF yesterday and a few are turning red. I also covered these two plants with my blueberry cages. Ripening this early I might get two uses from the same cage. Bill

I removed several canes last summer hoping to reduce the borer population. The PAF has some characteristics that I really like and I’m hoping that I can figure out a way to at least get a decent crop from them each year. Thanks, Bill