I have a couple of piles of wood chips in my yard which are shavings/Chips from having stumps ground out.

Would these make acceptable mulch for my fruits? Any issues with “robbing” N?

I’ve been using the same material as mulch. Works great, although less uniform and more dirt mixed in than with straight woodchips. N robbing isn’t really a thing unless you’re mixing the woodchips all through the soil. And even then, it’s really more N banking than robbing, as it will eventually be released as the woodchips break down.

Same experience as JC here. In my case they were black cherry stumps we had ground out.

Since this was brought up, I generally read comments in our UC extension articles about sanitation. Remove fallen leaves, fruit, etc.

What does this group think about parts of fruiting plants being used as mulch? For avocados, many say to let the leaves lie… perhaps there are times when we chip the trunk/branches of a fruit tree, or should that not be done?

Always OK? Never OK? Only where we know it’s not being removed due to disease?

Would these make acceptable mulch for my fruits? Any issues with “robbing” N?

I am using it for last three years and still have a fresh load on driveway. As long as you do not mix in soil these will be fine. Just let these decompose naturally.

hardwood mulch is not the best mulch material. 75% of the nutrient uptake on a tree goes to leaves and branches that are less than inch and a half in diameter. When this type of mulch decomposes it returns all those nutrients to the soil. Hardwood mulch (and God forbid bark mulch) is mostly carbon; decomposing bacteria will leach your soil of nitrogen as it tries to digest it. Not only that but hard wood (and God forbid bark) is full of antifungal compounds the tree create to protect themselves, which creates problems for your soil fungal activity.

Respectfully disagree. The authors of the glossy pamphlet with the pretty smiley lady fail to distinguish the type of woody mulch being used on the studies that formed part of their meta study.

I have used hardwood mulch. It creates a dead zone above the soil that while it offers the benefits of mulching, it has the specific detractions that I mentioned. Now I exclusively use green woody mulch. On one hand I have to apply it twice a year because that’s how quickly it decomposes, but on the other I have cottonwood; I can generate more than I can use.

I can dig with my hands around my trees. The chippy/branchy mulch quickly gives way to the decomposing layers with all sorts of squirrely critters around. Bellow is a very soft layer of compost and the previous mulch full of mycelium, unlocking all those minerals the green woody mulch has. I could keep on digging into the dark moist soil bellow with my fingers, but I wouldn’t want to disturb the worms and the feeding roots from the tree. It is still interesting to notice how some apple varieties are more likely to send shallow feeder roots than others.

The short version; hardwood mulch (and God forbid bark) creates a dead layer with some benefits but not as good as the superlative environment green woody mulch creates.

ive only used coarse hardwood sawdust i got from a firewood business for 5 yrs without any issues i applied at least 3in layer around all my trees and bushes every spring. i originally inoculated them with wine cap mushroom mycelium and had shrooms for 5 yrs. now i get my woodchips from a arborist which is a mix of fir, spruce, hardwoods and cedar. breaks down slower than the hardwood did but does the same thing. as long as its not tilled in i havent witnessed N rob. been mulching like this for 7 yrs now.

Yeah I love hardwood chips, and sometimes you get mushrooms too. If you’re worried about possible problems, compost it first. I feel that is not at all necessary. I have never seen any type of issues with hardwood mulch. Mine had a large portion of small branches in it. . I know it was my tree and I kept anything big for firewood.
I grow all my potted plants in mostly bark, not hardwood but pine. My plants love that stuff.
Tomatoes and peppers thrive in the bark mixes, best stuff ever. I use a 3-1-1-1/2 That’s Pine, Compost, Potting soil and 1/2 part diatomaceous earth the size of perlite, not the powder.
My figs love the mix, my driveway farmer fig forest with a few pomegranates in the back. Notice they all are mulched with hardwood chips. 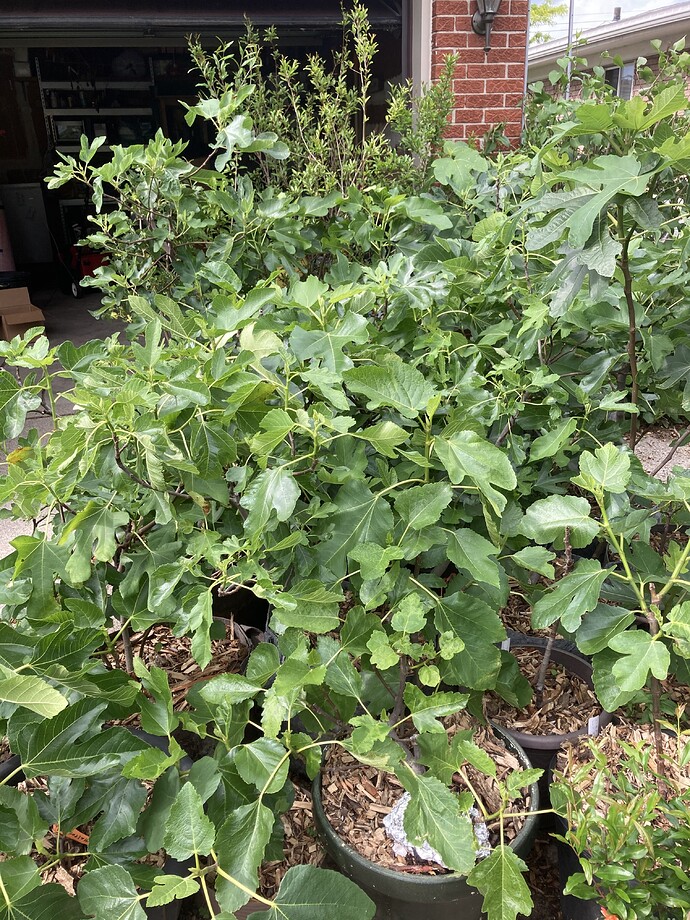 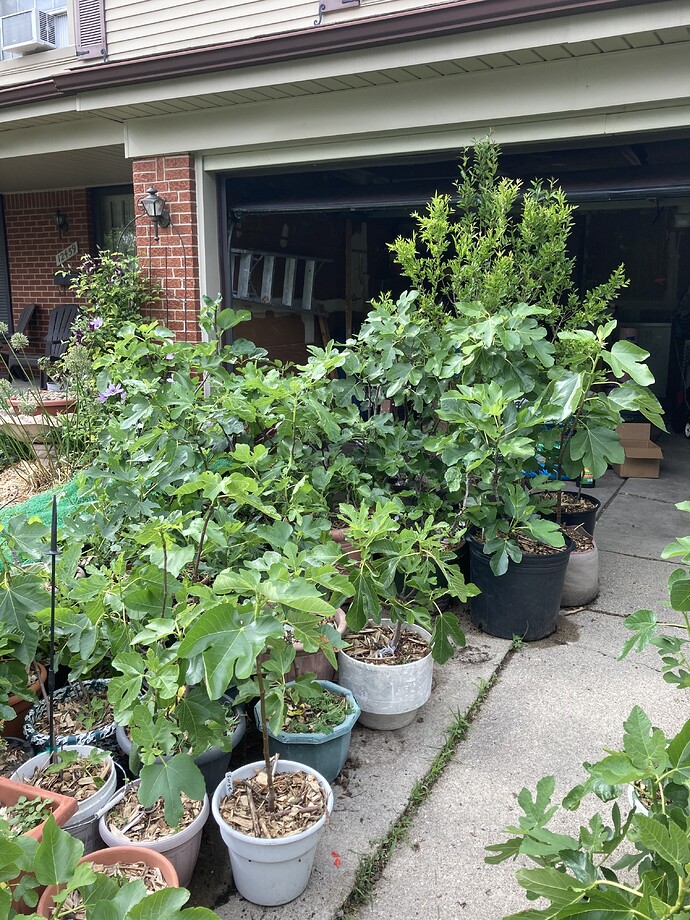 My gooseberries, red and black currants and black raspberries love the mix too. 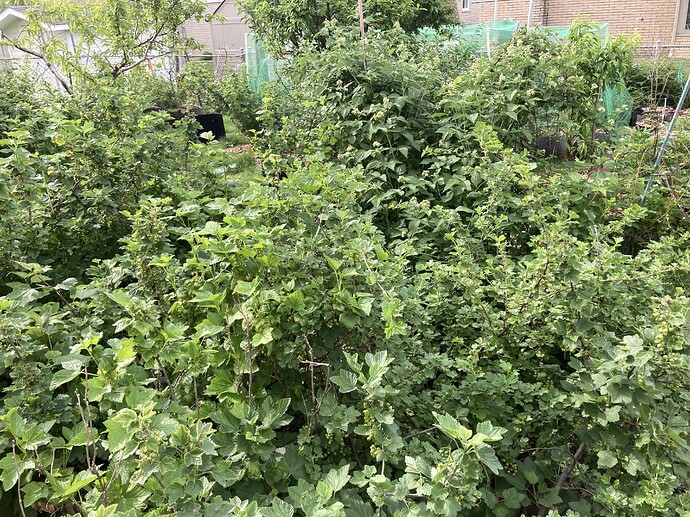 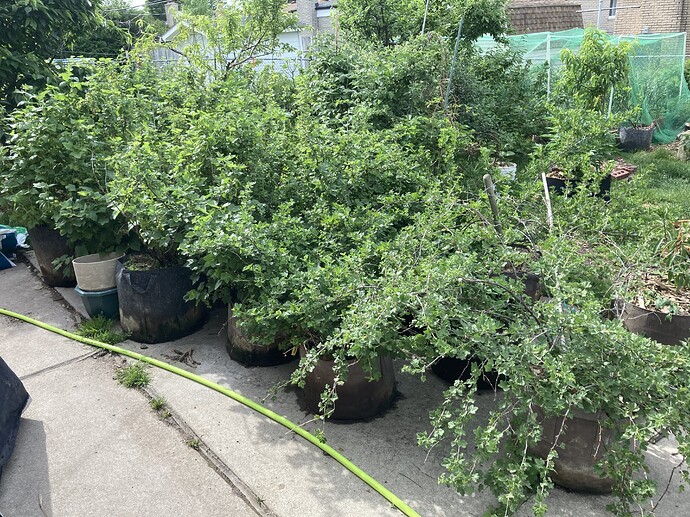 And yes these are all mulched with hardwood chips 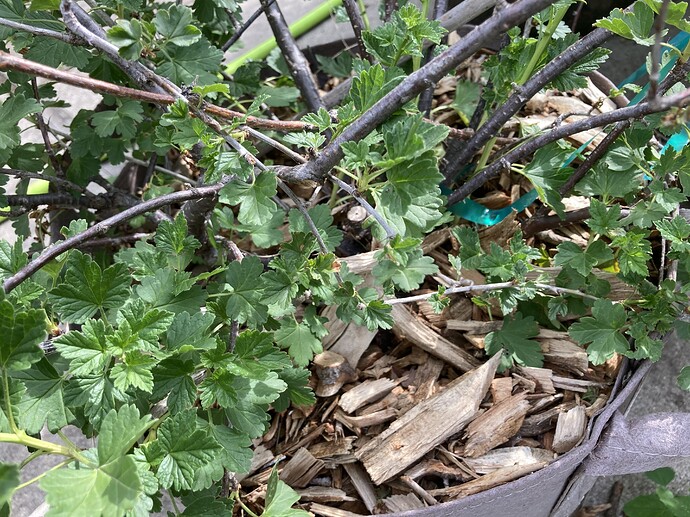 Been doing this for eight years or so. Photos taken for this post five minutes ago. Zone 6a 5/26/21

Great for mulch. If you have some leaf fungus or systemic fungus you may want to dispose of it. But otherwise it’s fine. I hate taking anything out of the yard except harvest. I know many good fungi can suppress pathogens, and if you compost correctly you can kill all of it. So if in doubt throw out or compost instead. I know some compost everything, even blue jeans, anything organic.

Great for mulch. If you have some leaf fungus or systemic fungus you may want to dispose of it. But otherwise it’s fine. I hate taking anything out of the yard except harvest. I know many good fungi can suppress pathogens, and if you compost correctly you can kill all of it. So if in doubt throw out or compost instead. I know some compost everything, even blue jeans, anything organic.

Time for the soil your undies challenge! Yes, it is a thing; shallow burry an old pair of cotton undies in your garden, wait 8 weeks, then dig them up to see what’s left. If your soil is particularly healthy it won’t have any problems breaking your undies down. If a good portion is retrievable you may want to bump up the organic portion of your soil by a lot.

Would not recommend Cedar chips.

ive used them but not exclusively. i think some occasionally is ok but strait up all the time would probably burn your trees as the oils would get concentrated. smells great in the yard after putting some down. 5 of your salmonberry cuttings took. waiting until they get a little bigger before putting them out.

I read about the blue jeans from Lee Reich the famous horticultural writer. He believes you should compost diseased plants too. I enjoy his books, I really like the one on pruning. I though have my own methods. Although I use a lot of his advice. He’s not just a writer he is a retired agricultural asst. professor agricultural researcher at 4 different universities.

I too don’t always use wood chips. I use whatever i can get at my favorite price point (zero). I use grass, pine straw, mostly leaves, this year I used wood chips because it’s all I could get for free. Since with the chip drop site I can now get wood chips whenever I want I will be using more once these completely compost in a couple years.

My neighbor had a big pine cut down last fall. They chipped everything but the main trunk. The tree crew gave me the chips. The plants I put that around look better than ever. Increased vigor and leafyness but not too much. The weeds are also dark green and super vigorous unfortunately. I have sandy soil so water and nitrogen are usually in short supply and vigor suffers. Its mostly chips but has some bark, smaller twigs and pine needles. I’d like to get some more.

when i used to work at the university i got lots of pine needles. they work great as well esp around the blue and ligonberries.

fresh evergreen mulch keeps out alot of soil borne pests and funguses when its put down fresh. cedar mulch does it best but need to limit how much you put down or the concentrated oils could injure or kill your plants. i use it occasionally but its mixed with other woods in arborist chips.

It’s a good Salmonberry.
believe me
I’ve tried many.