Writing on cuttings with a sharpie?

I’m trying to root a bunch of cuttings this year and, of course, want to keep the varieties straight. I received a couple of young figs in a trade and noticed the variety name are written on the original cutting with a sharpie. Seemed like a great idea, but it’s there a downside?

I’m about to start about 50 pomegranate cuttings, that includes 7 varieties and I’d like to just write the variety on each cutting to keep then straight. Thoughts?

I now do a lot of writing on the wood itself - when labeling grafts outside I just write on the wood and draw an arrow to graft if there are multiple ones of different varieties. The only thing to watch for is some permanent pens are better than others. There is nothing worse than having all your labels fade. I now use a special brand of permanent marker I bought from some garden website, the sharpie brand was OK but fading more than this special brand.

Scott
PS I found the brand I use on Amazon, its Garden Marker.

Thanks Scott. That’s good to know the makers are an okay option. Once I see which ones make it I’ll make regular labels when I pot them up.

Thanks Zendog and Scott. This is now on my to change list. Bill

This is another marker that works well for me.It’s the IDenti Pen by Sakura Color Products.Much better than a Sharpie.I picked it up at a local crafts store.This one has a 1mm and a .4mm tip. Brady 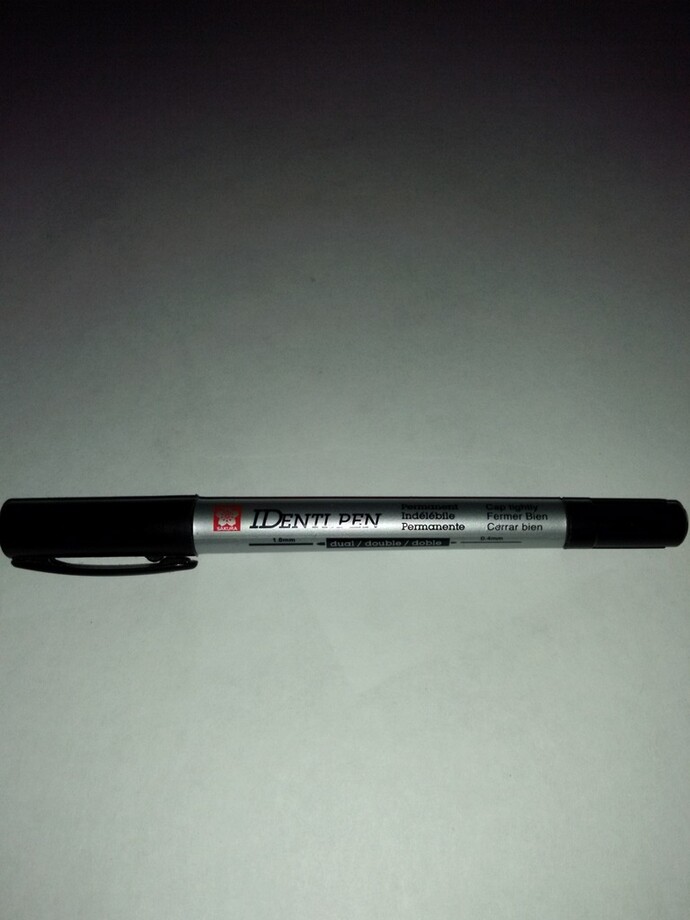 Thanks Brady. Next time I’m by a crafts store I’ll take a look for one of those. I like the idea of having the .4mm tip.

I just finished setting my pom cuttings up and used the sharpie for these. Since some were quite small, I used hash marks (1 for variety A, 2 for variety B, etc.). I’m trying toilet paper rolls and rolled up newspaper in seed trays to extend the depth so there isn’t a lot of room.

Fingers crossed some of these will take. I cut the ends at 45 degrees, scrapped up the bark a bit and painted on clonex to the bottom inch. Time will tell. 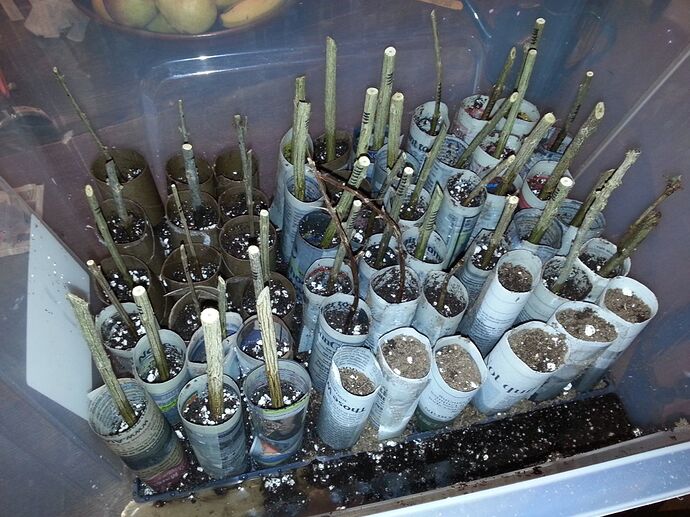 Looks like a finer tipped garden marker by artline is available a lot cheaper. The number is 47341 and in black EK-780

I’ll have to look into some of these. I was always of the belief that nothing was better than a Sharpie. I let my little ones play with some markers in the house, but Sharpies are off limits. I used to always carry one at work and times I accidentally got the ink on my clothing it never washed out or even really faded.
I guess some inks may be more susceptible to UV degradation than others. I’ve seen those identipens before…I’ll have to pick one up.

Got the artline EK-780 in the mail the other day. They were such a good price that I bought 2. The tip is so fine I can write on popsickle sticks. Highly recommend these!

A further plug for these markers: in my recent pruning I noticed nearly all of the markings on the bark I made last spring are still legible. I eventually put up permanent tags, but the marks on the bark are WAY better than the old masking tape with sharpie I used to do – I would have to hold those up to the light to look for a faint mark or two to tell me what it was. Also no worry about the tape coming off, the mark is on the wood!

I write directly on the containers with White-Out Pen. It’s physical and doesn’t fade for at least a couple years.

I finally sprung for this model.

The silver one writes on fig cuttings fairly well.

The gold one kinda fades into the green background and gets lost in the camouflage. 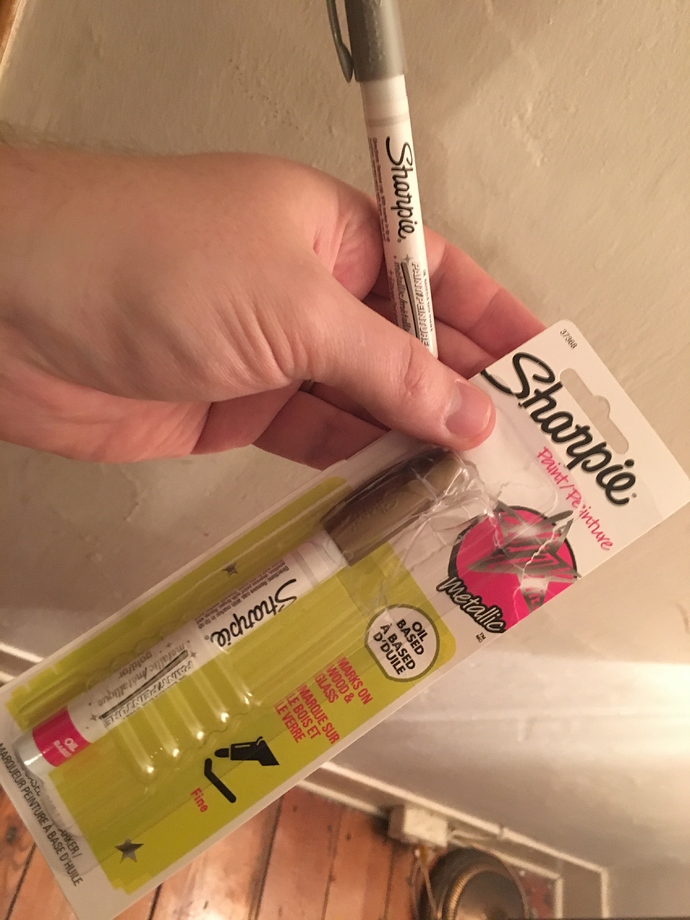 This is the marker I use: Sakura of America Identi-Pen. In my experience, they are vastly superior to Sharpie. I usually cover a stick with parafilm and use this marker to write on the parafilm. The writing easily holds for one year, after which a permanent tag is in order.

There are grease pencils that can be used to write on just about everything. Shepherd Pecan Farm uses these pencils to write on metal tags. Shepherd told me he has tags that are 40-years old that look as good as the day they were written.

This is one of his pencils but there are many brands to choose from. This particular pencil has string that you will unwind to expose/sharpen the media. 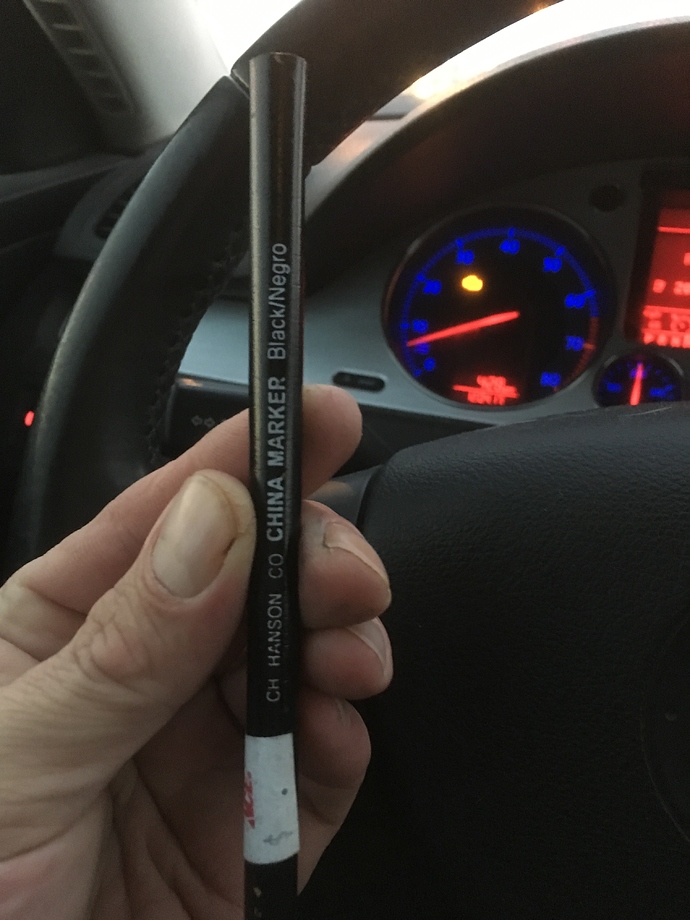 Stan’s marker is obviously better for easy writing on thin objects. But a place and a time for a grease pencil sure seems like a winner.