You should grow crandall currant

Hello everyone,
I like occasionally writing up my experiences with some odd fruits that I’m trialing. Today’s is the crandall currant. I am growing white imperial, gloire de sablon and pink champagne currants as well as a bunch of different gooseberries (invicta, black velvet, hinnomaki yellow, hinnomaki red, poorman, jeanne, jahns prairie) and am mostly growing them because I have a little plot of land on the side of my house that only gets 3-4 hours of light. To my knowledge besides some fruits like alpine strawberries, only ribes species will reliably fruit well with that amount of sun. With that being said, I always expected these fruit to be “second tier” in that the flavor for fresh eating was not expected to rival a great raspberry/blueberry etc. All my bushes are on their second year in ground other than the pink champagne currants which are three years old so while I don’t necessarily know what the mature fruit tastes like, I’d assume they aren’t going to change very drastically.

I really wanted to write a post on the crandall currant because I feel like I read a fair amount about currants/gooseberries on this site and the crandall currant is not mentioned much. I nearly didn’t buy this one because most fruits that aren’t mentioned much on this forum usually are lacking in flavor, vigor or productivity etc. In my and my familys’/girlfriend’s opinion, the crandall is the best fresh eating ribes fruit we have tried. It is still too early to say because none of my bushes are fully mature yet but if the trend continues, the crandall currant will also be the most productive ribes by a very large margin.

Heres a little close up of one of the branches of my crandall currant. This is actually after we had picked several berries off of this branch but all branches fruit this heavily if not more so. 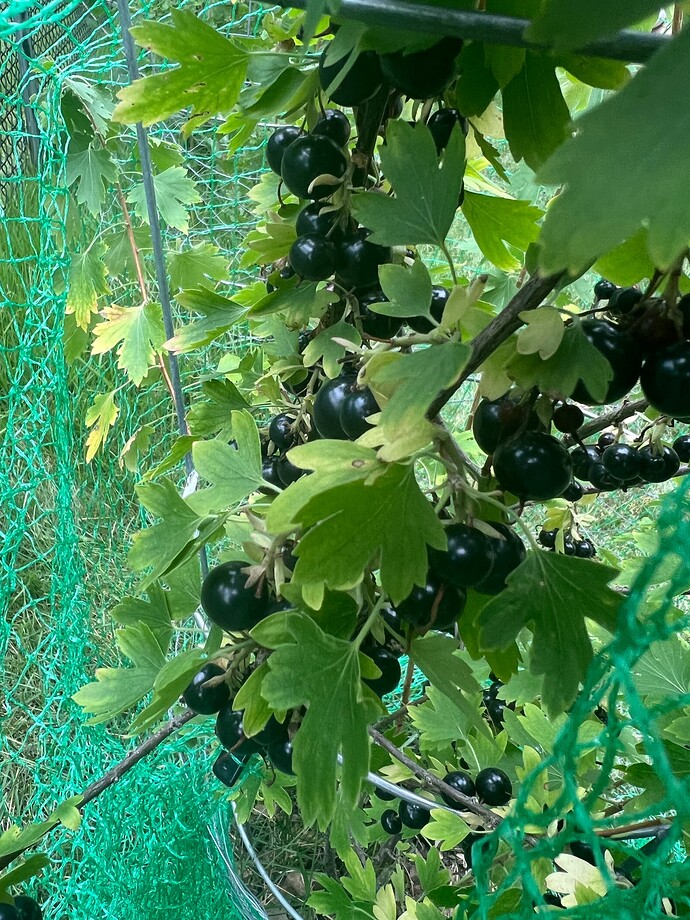 @Adamsmasherz … thanks for the detailed review.

I tried jostaberry and red currants down here in the hot/humid south east (southern middle TN) in both full sun and part sun (morning sun only) locations… and they could not hack it here.

They just refused to fruit… or grow… and had awefull foliage issues here which made them decline rather than develop.

@steveb4 has told me about the Crandall clove current and that others have had success with them in hotter climates. I have them on my try next time list.

Think that down here… i would still only plant them in a morning sun… evening shade location.

Ps… if you like Loganberry… down here they do great in a 3-4 hour morning sun location. Produce lots of growth and fruit.

Some good observations and I agree with too. Yes I do have to support the bush due to the large berries. I once pruned to the strongest upright branches and they still fell over.
I disagree it is the best tasting. Many gooseberries if left to hang can loose all tartness and are delicious at that point.
Rovada red when big produces very well with the largest berries of any other red I have grown. I think it is the best choice for a red because of size and ease of harvesting. Most reds are a total pain to harvest.
I like to make a very pulpy syrup with regular black currants and the flavor is so complex and rich. Adding sugar tames the flavor to something very special. Nothing like how they taste fresh. Although it is an acquired taste I developed for them. So some may still not like them. This year was very dry and the fruit on Crandall is extremely good. Not always this good. I’m harvesting right now.
All fruit is amazing this year. My blueberries are so good the feedback from friends has been very favorable. Sun Gold cherry tomatoes are outstanding this year. A ton of positive feedback. I can’t even count the times I heard best tomato ever or best blueberries I ever had. Same with the hard neck garlic. It is just outstanding this year. The largest bulbs ever and extremely tasty. The cloves are large and juicy.

Have not tried Crandall. (But I am trialing a bunch of others…jury’s out on most of them, but Titania black has disappointed in meager cropping and isn’t much for fresh eating.)

Have you tried honeyberries? They should grow ok in part sun. As should cranberry bush viburnum.

I planted several varieties of red and black currant as well as josta berry and several varieties of gooseberry several years ago. The red and black currants never produced here but the randall thrived. My only remaining currant is the randall. Josta berry also succumbed to randall. I still have the gooseberries because they are nice bushes but they also have never produced. I have never had a bird bother the crandall currants. What I don’t pick and juice gradually become dried raisens on the plant. Crandall makes a wonderful tart pie and also a very good juice.

The plants take hot desert temps in full sun but we have no humidity.

Currants do not work here, in a couple years they die from borer invasion. Good luck if yours live.
Dennis

Do you know how Crandall compares to Consort? I have a consort and so far i find the bush not that productive at all. It is also stinky as Heck. I don’t find the taste to be that great either.

I have an imperial white, incredibly productive. It is our favorite currant; among dozens of varieties of preserves we can make the white currant jam wins.

I also have a Rovana red, we love it as well. It was gifted to me as a potted old and tired plant that was not producing. After pruning the roots to liberate then, pruning just about all the old and tired branches, and planting it in the ground, it took off very well. Great producer.

I’ve also read that crandall can tolerate heat better through some of the reading I did online. When you look up clove currant some sites even state it can grow in the heat of Texas. If you do end up growing it, let us know how it fares by you. In zone 5, I give it no winter protection and have no winter die back so it seems just as cold hardy as other ribes.

Unfortunately, Loganberry is only rated in zone 5 from what I’ve seen. Have you read it can survive in zone 5? If it can I would definitely considering getting myself some plants.

Totally fair, I hope that my gooseberries taste as good or better than my crandall in future seasons. This year I let them grow and sampled them to the point that they started to dry up on my bushes. Maybe the bushes are just too young to continue supporting the fruit this late into the season. You mentioned you’re still harvesting your crandall, are you still harvesting your gooseberries? If so, this gives me hope that eventually my gooseberries will be able to hang long and potentially taste much better.

@BlueBerry I have some honeyberries growing in full sun right now, this was my first year harvesting them. I actually would say that they’re up their with other top tier berry fruits like raspberries/blueberries (at least the latest versions like Aurorora and the boreal series). I’ve read they could tolerate shade but not to the level of ribes, have you grown them in only 3-4 hours of sun?

@don1357 Unfortunately I have not grown a true black currant. I am more interested in fresh eating than Jam making/flavoring etc, and my family usually does not like fruit with a “spiced” flavor to it like black currants are reported to have. Up until August, my family was eating the pink champagne, gloire de sablon and white imperials that I grow. They unanimously agreed that the white imperial tasted the best for fresh eating…until they tried the crandall at which point they also unanimously agreed that the crandall blew the white imperial out of the water.

Do you know how Crandall compares to Consort?

These two are different species with many differences from eachother.

I am done harvesting gooseberries. But some can be left into September. They may hang longer once mature. Good point. My poor man will stay on till the first fall frost. Each plant is different. I like letting them hang till no good just to know the next year when prime time is for harvest
One year I didn’t think poor man fruited. In the fall when prepping for winter I finally saw the berries. Wow! They were very good.

@Adamsmasherz … i got my loganberry from OGW and just checked their zone recommendation… they say 5-9.

I am growing them in 7a here in TN.

I was mostly thinking of how well mine have done with morning sun only when i mentioned them.

I have them in one location that gets very good morning sun only… 4 hours or so… and they do fabulous there. Thrive and fruit like crazy.

And in a second location that still only gets morning sun… but less… 3 hours… and they are doing great there too.

Growing them in z5… sounds like it would be on the edge of what may be possible.

I’ve ordered two Crandall currants over the years and they never survive more than a few weeks after shipping. Could just be bad luck.

These two are different species with many differences from eachother.

Hence me asking how they compare

Hence me asking how they compare

I was trying to emphasize that they are both unique from eachother. They have differing growth habits, leaf shape and flower aesthetics, different favor profile, differing insect & disease susceptibility and differing uses. They’re different enough that it’s more useful to just address what a ‘Crandall’ is like without any need to bring up traits of a different species for comparison. In fact if I’m not mistaken they’re distant enough relatives in the Ribes genus that they would not even readily hybridize with each other.

Back to your request though, I think what you’re wanting to know is if ‘Crandall’ is good for fresh eating. The general consensus seems to be that most people who’ve had them do enjoy them fresh. This compared to the various “black currant” cultivars of which ‘Consort’ is one; which are all at their best cooked even if some are mild enough that some people will eat them raw.

I think I will try them given that information, I had always read zone 6 but they aren’t particularly expensive to acquire so I will definitely trial them next year. Thank you!

Where are you ordering from? Did you get them bareroot? Interestingly, I noticed that the gooseberries I got bareroot actually grew more aggressively than potted plants. Could just be coincidence though.

From what I’ve read online (as I’ve never tried true black currants), black currants have a spicy/musky flavor. It is suppose to make excellent jams and pies but many people dislike them for fresh eating. This is nothing like my experience with crandall which has a wonderful concord grape sweet/sour flavor.

Could be that the bare root ones got fresh soil whereas the potted ones had nitrogen depleted soil surrounding their roots.