Peach Bud/Bloom cold weather hardiness is a topic that has been touched on in many other posts but I would like to revisit it again. Which peaches did best for 2017 for Bud/Bloom hardiness? I live in Zone 7A and it is extremely rare to get below 0F so I assume Bud Green Tip forward to full bloom is the risk period for my area,

Olpea in an another older thread published a bud hardiness rating to the trees he grows which I published again below (all credit goes to Olpea). 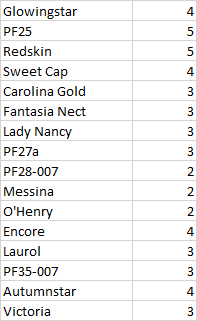 The ratings are as follows:
1=very poor (almost a blank tree),
2=poor,
3=fair (not super happy, but something I can live with)
4=good (very full crop-would require some thinning)
5=excellent (almost as if the cold never touched it)

What other trees offer good bud/bloom hardiness? Some trees that I would like to hear about include Intrepid, Veteran, PF24C, Jefferson, Monroe, PF1, PF5D/B, Autumn Flame, PF 8 Eight Ball, Fingerlakes Super Hardy, Evelyn, Hale Haven, JJ Hale, Crimson Rocket, Elegant Lady, China Pearl, Challenger and Polly. Any other hardy or not so hardy peaches that people would like to share?

Even though I am not a commercial grower my goal is to have reliable fruit production for decent peaches throughout the season, not necessarily the best peaches. Getting frost tolerant peaches is a big part of the puzzle for me.

As always thanks in advance to the feedback and knowledge shared on this forum.

I’m not sure how @Olpea feels about reliance but they do fine here for me.

CoralStar 6b up here in Ohio are my best peach year after year. Surprised to see them as a 1.

I have CoralStar planted - I should get peaches this year (2018) assuming the stars align. How is the quality of the fruit?

Big, sweet, holds up well after picked and taste really good. I Love a peach that requires a roll of paper towels to eat.

When does it ripen for you?

I start picking towards the end of July into mid August.

Thanks Spud. Just as a disclaimer, that test winter was only down to -10F, which many wouldn’t consider a test winter. But it is here. It seems like -12F will wipe out the peach crop on all but the hardiest varieties here. I doubt you will have any bud kill issues with temps at only 0F, so you’re right, it sounds like spring frost is the thing to watch for in your area.

I’m not sure how @Olpea feels about reliance but they do fine here for me.

I grew a Reliance quite a few years ago. I also bought one for my mother. They were both very productive. I just didn’t feel like the quality was as good as some other peaches which ripen around that time (+5 Redhaven)

CoralStar 6b up here in Ohio are my best peach year after year. Surprised to see them as a 1.

The trees did produce very large fruits of high quality, but just not very many (like a dozen fruits per tree).

Alan has mentioned Coralstar produces well in his area. I don’t understand why it’s been such a consistently poor producer for me.

Some trees that I would like to hear about include Intrepid, Veteran, PF24C, PF 8 Eight Ball, Challenger

I’ve got those but they were all too young for me to feel comfortable evaluating. Veteran has a long history of supposedly being cold hardy. As I recall, Chickn tried a Veteran peach off a tree last summer and really liked it (He grows some nice varieties tomatoes btw. Shared one with me. Still remember it. Delicious.)

Bob Purvis has this to say about Veteran from his Website:

“Veteran: From Canada, 1928, has withstood -29F in central MN and borne a crop. Tree has a spreading growth habit and medium vigor. Fruits are sweet, large, moderately firm, mostly yellow in color. Flavor is outstanding; a favorite for home canners. Veteran ripens 24 days after Redhaven. Ours were ripe Aug. 12-14, 2014. (Note: I do not have Redhaven growing here.)”

I grew PF1 for a good many years. I would rate it fairly cold hardy. Very early on, I recommended this peach (ashamed to say, one of my worst recommendations ever - I was too new in the business and excited about any peach which produced something wet. I still feel bad that Mamuang and Bob Vance ended up planting PF1 from my recommendation on an old forum.) I ended up planting more of them myself when I started the orchard at the farm because it was the only peach for that window. I finally realized they are really a crappy tasting peach (compared to a decent home grown peach) and cut them all down.

I’ve also grown PF5b. It’s also fairly cold hardy, but perhaps not quite as cold hardy as PF1. I also removed PF5b because of taste. We get loads of rain here generally in the spring, and very few early peach varieties obtain acceptable levels of sugar. I’ve culled a lot of early varieties for this reason. In climates with dry spring weather. PF1 and PF5b might taste quite good, IDK.

It’s true reliance are not the best quality of peaches but we can grow them in places where other peaches won’t grow. It has not been -20f here for awhile but some day it will be again. Reliance can take cold few if any other peach can.

For anyone interested, here is an old post on Nafex from a commercial grower in northern IL. He eventually gave up on peaches because they wouldn’t fruit often enough at his locale. Look under dmnorton:

Lastly, here is an old bulletin from NY ag experiement station. It lists not only cold hardiness, but many other attributes of the peaches they tested. While not all their evaluations have proven true here, there is a lot of good info on some of the older varieties which are still available (i.e. Halehaven, etc.)

One more cold hardiness paper I came across. I’ve grown quite a few of these cultivars on the list and would generally rate the ones I’ve grown off this list as very productive and mostly later blooming (Saturn blooms early but has been very productive for me.)

I notice the method used to determine hardiness is to actually cut the buds open and calculate dead buds vs. live buds, which I think would be the most accurate.

I rated hardiness simply by going through the orchard after everything had a chance to reach full bloom and then observe the trees for how many blooms they had. So a tree like, say, Blazingstar, which produces a ton of flower buds might lose 80% of them and still show lots of flowers during bloom. Whereas, a tree like Coralstar, which produces a low amount of fruit buds for me, nevertheless lose less flower buds during winter, but still produce less flowers during bloom, because it started with less.

On the chart, the only meaningful info is the columns of Jan. 10th. The other two columns were after another winter freeze of -12F, which killed basically 100% of the fruit buds on all cultivars.

I did notice, I’m not the only one whose had problems with Coralstar. The paper said that Coralstar was one of the varieties blank (or nearly so) after a frosty spring in 2010.

"In 2010, ‘China Pearl’, ‘Encore’, and
‘Blazingstar’ were the best performers, while ‘Saturn’,
‘Challenger’, ‘Sureprince’, ‘Coralstar’, and ‘Crimson
Rocket’ had no or minimal crop (data not shown).

Olpea,
I’m sure your aware but reliance is a July peach for me. Contender and flat wonderful also fruit pretty regular for me but are both later. All my peaches have some canker and brown tot problems. One reliance peach is over 20 years old and crops nearly every year.

I’m sure your aware but reliance is a July peach for me. Contender and flat wonderful also fruit pretty regular for me but are both later.

It sounds like something’s probably mislabeled. I’ve grown all those peaches. Contender is later (+21) (ripens a couple days after bounty Bounty here), and Reliance ripens (+5) in late July most years (but we’ve had an early bloom last couple years, so yours has probably ripened earlier the last few years) but Flat Wonderful ripens before Reliance. I grew Flat Wonderful for quite a while and it ripened (-14)

Many thanks @Olpea, this is the kind of stuff I enjoy reading.

In my yard, PF 24 C is cold hardier than Autumn Star. It is a good tasting peach to me.

@olpea, don’t feel bad. My PF 1 issue was that its taste was not consistent. It would have been a wonderful multi-grafted tree for me, had it not died of an unknown cause.

Flat wonderful has characteristic flat peaches and purple foliage but it’s 2 -3 weeks later than reliance and contender is at least a month and a half later than reliance. They all came from Gurneys. My yum yum nectarine was from there also but not done wonderful.

Thanks Olpea. I am going to plant Veteran in 2018. It consistently comes up as the most reliable peach along with Reliance (which is not reliable for me - lose blooms to frost).

I went ahead and ordered Pf1 and PF5D (I assume an improved 5B?) knowing that the folks on the boards don’t care for the taste. I hope they are not worse than store bought peaches which are horrible in my area. I already have Desiree in that window so hopefully between the three I will get something edible. I will save Earlistar for an other year.

Thanks for the recommendations.

The link to the peach rating from the NY AG station is interesting - the hardiness ratings and the fact that many varieties are not available anymore - at least through the Internet.

I tried to find Prairie Dawn, Brighton, Envoy, Triogem (listed as a standard variety) as they were listed with a hardiness of 4, it would be interesting to hear from folks who grow or have grown them and see how they compare to more recent varieties. .

Here is a link to a later list of peaches, 1986 that has that has an expanded list of varieties.

Off of this list I am going to try Redskin and Madison.

Thanks for the links!

I looked back and see I started fruiting Flat Wonderful in 2012 and fruited it through 2016 (5 years). It ripened consistently two weeks before Redhaven (-14) for me, which matches the U of K table.

It’s possible one could pick Flat Wonderful a little later because they hang on the tree like glue (Reliance drops when ripe.) But since you and I live fairly close to one another, I can’t imagine Reliance ripening a month and a half before Contender (which would be 3 weeks prior to Redhaven) or three weeks prior to Flat Wonderful.

I strongly suspect your Reliance is really something else. I know I’ve received many mislabeled trees and generally my first hint something is amiss is when they don’t ripen when they are supposed to.

I’ve got 3 of them currently olpea ordered at different times that are identical trees. They all came from gurneys