Since I’ve had a lot of my tree fruit fried by recent freezes, I’m hoping for a good berry crop this year.

So, I’m creating this thread to hear about y’all’s berry plant progress and harvest for this year.

Regarding our plants, with the strawberries, they started blooming at the first of April. I got the patch weeded and fenced in then. Because of the blooming, I covered the majority of the patch during a couple cold nights, but we still lost some buds. There was a 28 degree night that I did cover, so we lost quite a few more. But, It looks like they’re still pushing out new blooms.

This will be the first year we ought to get some berries from the Flavorfest plants I planted last year. I am also about to plant a row of Seascape berries, which are everbearers, so we might get some from them later in the year.

It looks like our raspberries did pretty well over the winter, although I had to do quite a bit of pruning. I got the patch weeded, and fertilized last week, it looks a lot better.

There are quite a few decent size canes, nothing over 4ft, but we ought to have a decent harvest. Plus, it looks like we’re getting a good number of new canes as well.

Our blackberries had quite a bit of winter kill, especially the UArk varieties, so I had to prune out a lot of dead canes. But, I will say they did better than last winter. There has been some new canes, but the hard freezes we had looks like it hurt some. But, we should get a decent floricane crop.The Triple Crown row looks pretty good, although I had to prune out a few canes. It should give us a big harvest.

The three gooseberries bushes look pretty good, the larger one (Oregon Champion) is already showing fruit buds. The next largest (Jeanne) also has some buds. Hoping the other two plants give us some fruit this year, they’ve never produced anything significant since they were planted (2017).

Anyway, hope everyone has a bumper berry crop, so let’s hear how they’re doing.

Back in 1992 I had already had ripe strawberries a week before ‘Derby Day’…from Earliglow.
First, second and third week of May.

I have EG, and there are a few with little red berries on them now. I lost quite a few strawbs when I didn’t cover them one night it dropped to 28. But they seem to pushing out new leaves and blooms.

Deer have been making incursions, so I put a fishing line fence around the patch.

Tomorrow I’m putting in a row of everbearing Seascape strawbs, if the ground’s not too wet. I got them from the county extension office last month.

Well there you go! (I know we must be 2 or 3 days earlier than your part of the state.)

Well, provided that the Derby has been delayed, I think it’s safe to say we’ll get a lot of berries before it’s run this year…

@subdood_ky_z6b, good thread interesting to see differences between climates! My red currants, gooseberry, honey berries and strawberries are all flowering, black currants and saskatoons are slightly behind, raspberries and blackberries juat starting to leaf out

I heard they are doing a virtual Derby this year. Secretariat is favored to win.

My red currants, gooseberry, honey berries and strawberries are all flowering

That sounds odd to me with you in BC, I guess you’re in kind of a temperate location? How long have your strawbs and gooseberries been blooming? As I mentioned, my strawbs have been flowering for about a month, but the one gooseberry just started this week.

raspberries and blackberries juat starting to leaf out

My rasps are just about fully leafed out, some of the canes look a bit odd, in that they are not all covered with leaves, guess it’s winter damage.

My Prelude canes have several fruit buds on them, even looks like some are about to bloom. Since this is the first variety to bear on floricanes, I guess that’s not a surprise. It’s also really shooting up some new canes, I bet there are about a dozen now. Killarney, Nova and Caroline are starting to sprout new ones, too.

Black rasps aren’t as vigorous, but have a few new canes at the crown, but they don’t tend to sucker as much.

My gold/yellow rasps are also really pushing a lot of new canes.

Blackberries are starting to set fruit buds on some floricanes, but not many leaves yet. Freedom, Traveler and Osage are the ones showing buds. Triple Crown is lagging behind a bit.

How are your tree fruit doing?

you and I are pretty much in synch. (Southeast Michigan, just north of Windsor, Ontario here).

Everything you said is true for me though I can add my asian pear is just beginning to open flowers (the european pear is lagging behind) and my Toka plum is flowering but the damson rest of the tree is not. Kiwi (hardy Argunta and polygama) are just beginning to push leaves.

I prefer my mint julep’s without the mint or the sugar.

SE Michigan? Aren’t you close to @Drew51 and @thepodpiper, then?

@Chills yeah my hardy kiwis are just starting to push leafy buds, grapes at budswell, asian plums in full bloom euros not quite open, peaches blooming as well(what didnt freeze of due to multiple freezes after warmup/budswell). Euro pear opened to individual flowers but still tight bud, most of my grafts are looking to have taken but still early days. @subdood_ky_z6b yeah im at 54.5 deg n latitude but relatively close (63km south or 120km west) to the ocean on a major river valley so temperate rainforest country for sure! Is quite interesting to see how more southern locations have a more spread out spring! We seem to wait and wait and then everything blooms for a month and you could mow your lawn twice a week. I do enjoy the long days and finally getting some heat again (18c high today low of 6c…supposed to get into the 20s later this week!)

Well, we’re in the Ohio River temperate rain forest (well, it seems like it most of the time). Two days of rain, one nice day, can’t do too much outside those days. We average about 36 inches of rain a year.

We did our first lawn mowing about three weeks ago. Grass grows like crazy here, we should mow once a week, or it starts to get too tall. But, I usually mow every 10 days.

We live sort of a small valley, the trees on the hillsides are starting to green up. My fruit trees are a little further along, peaches, pluots almost fully leafed out, pears close, apples starting to fill in. In about two weeks everything should be fully leafed out.

No peaches or pears this year because of a couple mid 20F nights during or just after full bloom. Mid 70s and sunny here tomorrow, tho.

My raspberries are all regrowing and doing good this year! Strawberries took the freezes with no issue as well and should have some in a few weeks so very early. So i left those two blackberries alone last year and did not fertilize or give any extra care, they went to sleep early and i thought they were gone but yet they are back and maybe with some fruiting buds, their canes are much smaller this year.
Peaches re-blooming,e pears just starting to open flower buds, Bavays gage at the tail end of full bloom, Most apples at green ears and sour cherries at the same time as sweet cherries for the first time i have ever seen.

It is too early to tell, but I think raspberries need a @applenut style chill hours myth-busting. I planted many varieties that are supposed to be high chill and marked for zones upto 7 or 8 (except in DWN website) like double gold, caroline, etc. I got a good fall harvest and the berries are sizing up for a bumper floracane crop. The planting site is the opposite of the ideal, next to a west-facing wall which gets baked in summer and probably reduces the chill hours too. My one season in coastal Nor.Cal is hardly a clear cut evidence (I guess @Girly had good harvests too) and they should really be tested in ultra-low chill So. Cal, but might be worth an attempt. If it checks out, everyone can grow many nice varieties instead of relying only on bababerries.

And 2018 was nearly double average, and 2019 was wet except for August-October when it became very dry. Winter has been above normal again in rainfall. (Little snow.) 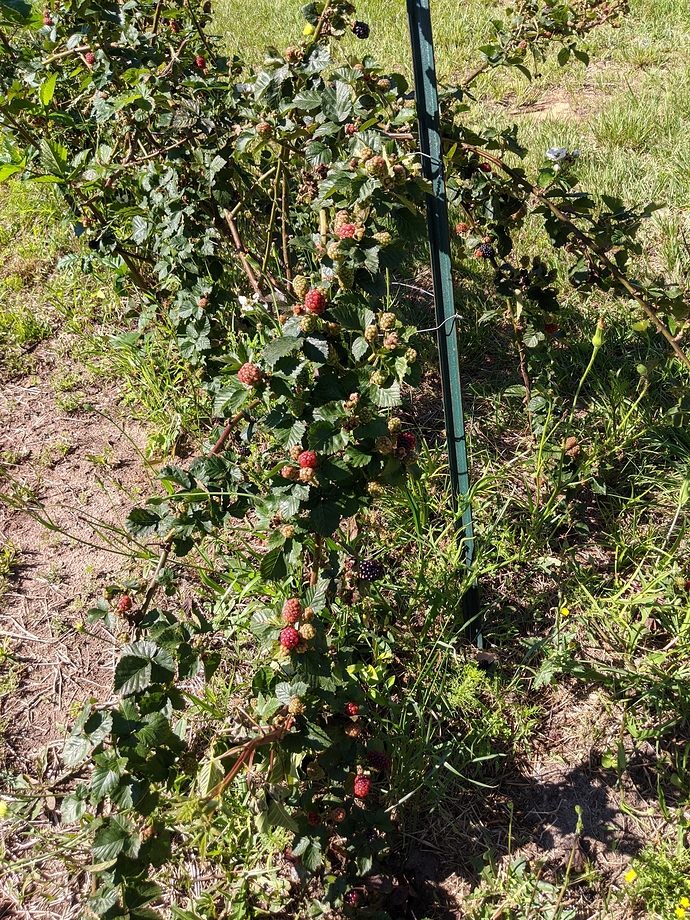 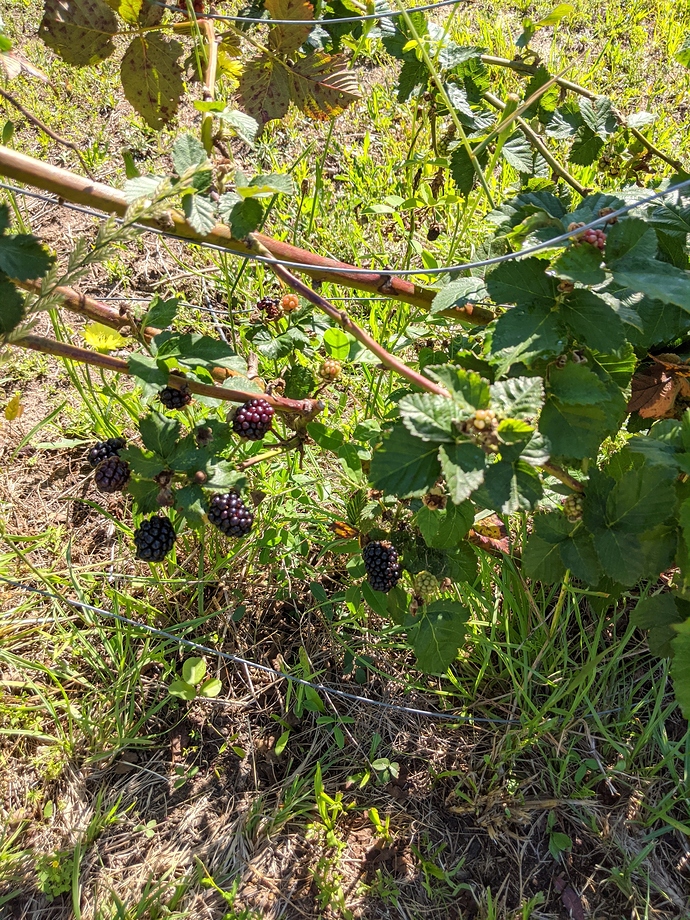 Actually it’s about 43", according to some data I just found. May thru August average is about 17". But, last summer was very dry, that’s why our tomatoes did great.

@Drew51 is 15 mins away. I’m not exactly sure where @thepodpiper is…

I never figured the freeze in March could bother the strawbs, but the first blooms to open had blackeye. 3 days later, the flowers opening now are alive, so I guess I’ll have a crop after all.

It was close. I KNOW strawberries are the most susceptible, but so early!