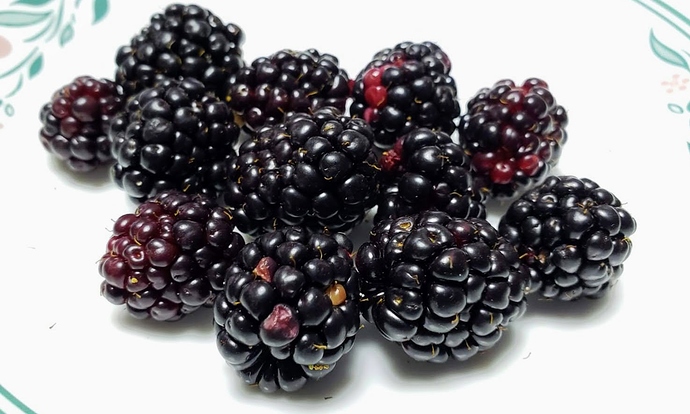 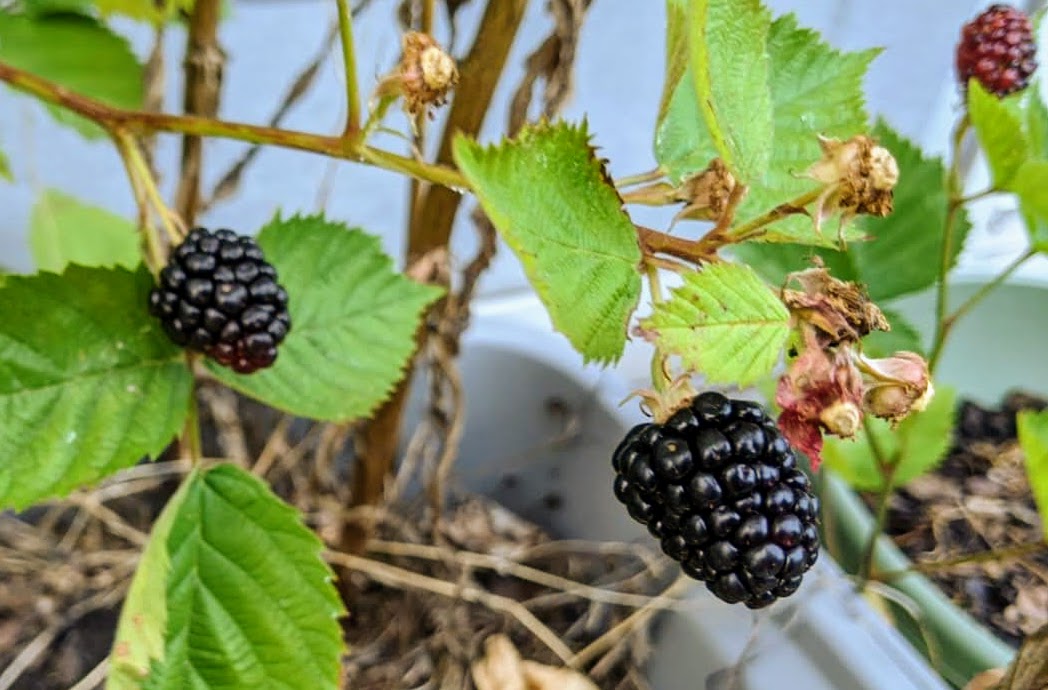 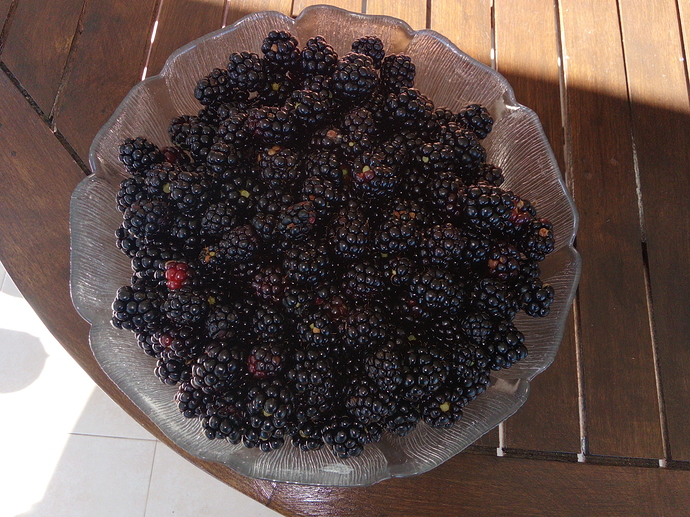 Nadia anyone? I just picked the last ones. They have sized up nicely, the size of a medium plum. The flavor is better than the ones from the early years, lush ,crunchy, with pleasing cherry flavor mixed in. Friends who tried them said they could eat them all day long. They taste best when chilled. 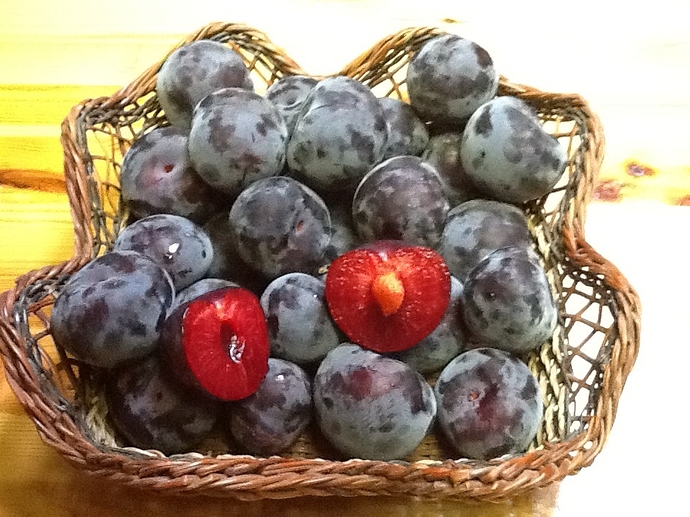 I found a new way to preserve fruit, Nadia in this case. Cut them up in quarters, place on a drying rack in a greenhouse or use a dehydrator, dry for four to six hours, blend in a blender, pour in ! gallon freezer bags, lay flat in the freezer. Once frozen, the fruit is easy to break up and can be consumed as is or used in jams, desert toppings, mixed with drinks throughout the year. This fruit concentrate takes up less room in the freezer too than just freezing fruit without dehydrating. 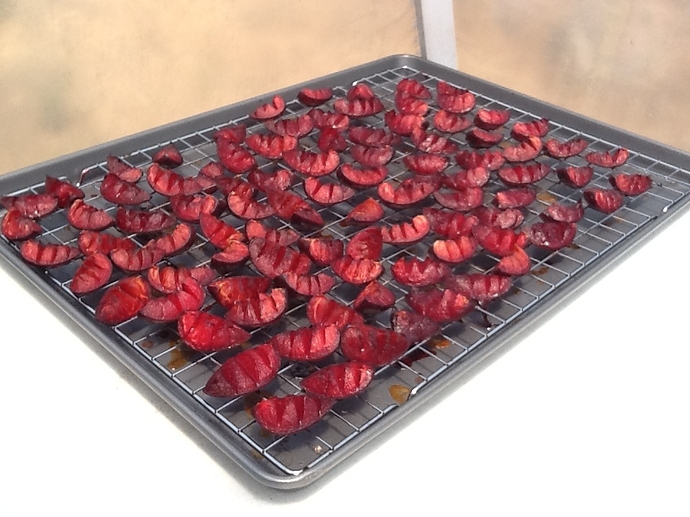 I’m still learning to tell ripeness in blackberries. I think you should let these be on the canes for 2-3 more days. I harvested some today after I let them ripen almost like a fig, but not quite dry. It’s so much better tasting

I think you should let these be on the canes for 2-3 more days.

You are right I am still learning and birds are taking most of these. I will do that. Thanks for pointing out. 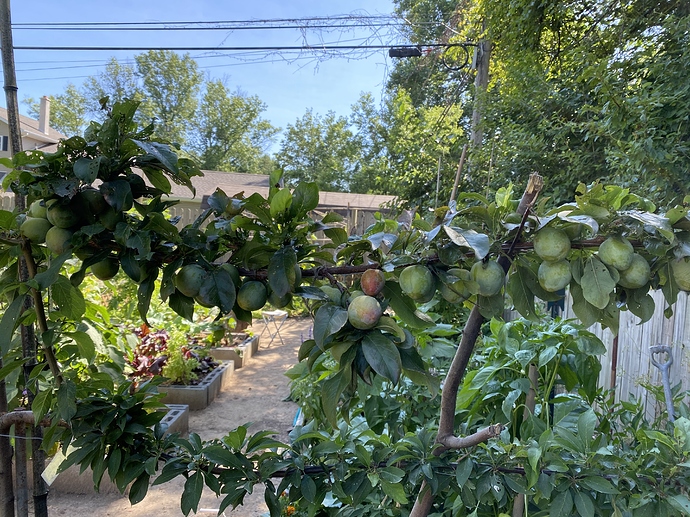 I’m pretty sure a squirrel already took mine…i found one at the base of the tree half chewed. Be aware…the tree rodents love them.

It’s inside an electric fence. So far they stay out of it. So I’m hopeful I’ll get to taste a few of those. I accidentally knocked one off the other day. My 8 year old ate the entire (very sour) plum! I can’t wait for them to taste a tree ripe plum for the first time.

@Susuyou have more Satsuma this year than I have ever had in my all years of growing them. If freeze does not get it, the lack of sun siscourage fruit set

Congrats. When I had them, I like them. Mine were also small. Yours look bigger.

I hope you won’t get the fungal problem.

You were right today I find 3 pomegranates developed fungus while others looking
fine now. Please suggest me a fungicide if you tried any. 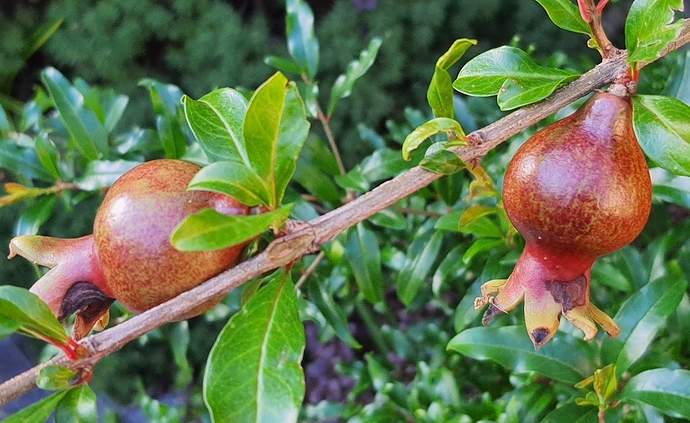 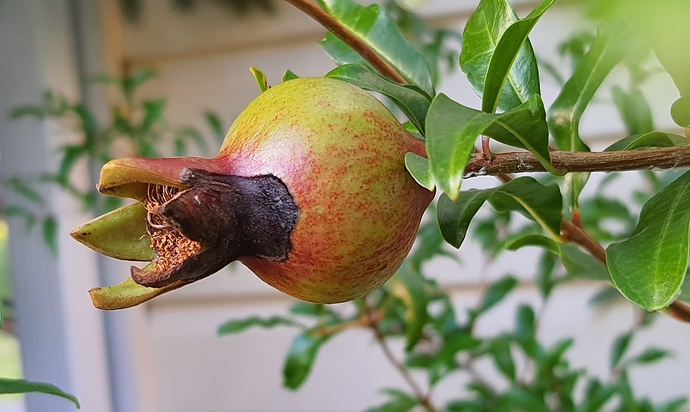 Oh no! That’s IT. And it sure knows how to ruin a party.

I have not found the magic bullet, yet. And I don’t think that the experts have, either. I read, recently, in a University of Florida trial - that Captan or Dithane will control the fungus on the fruit.

Last week I mixed up some Captan. I don’t like to use things that warn us about ‘thyroid cancer’. (Especially since I’ve already had thyroid cancer!) And I don’t like to use things that harm pollinators and other helpful / harmless visitors. I sprayed it on whatever fruit, at all stages of development, that I could. My trees are small and I was able to walk the ‘orchard’ and spray with a small sprayer. I concentrated on the calyx area - as that is where the disease seems to originate. I plan to do this every 2 weeks - or after ‘rain events’. Maybe it will save some of the newer fruit.

I don’t see any leaf damage. Some tip damage on new shoots. I hit that, too. Mancozeb was recommended for fungal problems on leaves.

I hope to find something that will, if not halt . . . but at least lessen the damage. It’s heartbreaking to have to pull fruit after fruit off of the trees. But, when I see a blackened calyx - I pull it. So my advice to you would be . . . . Pull what you can, Naeem. And pick up all of the fallen fruit and blossom ‘trash’ that is under the trees. ‘They’ say to destroy it. We have a burn pile out back - and that is what I do with all of it.

And at the end of the season I will rake away all of the ‘old’ mulch . . . and spray a fungicide on the ground, before I remulch. I used Copper the last time.
However. The mulch, itself - is probably a BIG culprit. So, we have tried cardboard out in the orchard. It’s easier to see and remove all of the fallen debris. It’s not very pretty, but it does keep the weeds down.

I had several ‘fungal free’ summers - with clear fruit - when my first trees started bearing. Then, seemingly out of nowhere, the fungus showed up. Did it come in with the mulch? Did it drift in on the wind? Did freakin’ evil fairies bring it? LOL
Not funny . . . but sometimes it feels that way.

Dear PomG! I used Captan on my stone fruit before I discovered Indar. If my Captan was not perfectly diluted it burned my plums especially and left scars. It is very potent.

Thank You Thank You @mrsg47 !
I am pretty new at using these ‘specialized’ chemicals in my garden. I usually used Seven - or nothing at all ! And good old stinky Malathion! That was years ago.
This pomegranate fungus is beating me UP!
I will get some Indar and try that.

I’ve also run into a tomato worm problem. Usually I just have hornworms - and we pick those off. But, this summer we have what looks like pinworms. Really tiny. Black. Attack the stem end of the tomatoes and make a mess. Any suggestion for those?

I love your photos and reports from France. It all looks so lovely.

I’m not sure Indar is right for pomegranates, I mentioned It because it worked well on soft fleshed fruits, for me. Monterey Fungi Fighter was my go to spray for any fungus at one point and it was great. I am not sure if it is still being produced.

MrsG
I think I saw Monterey Fungi Fighter, actually! I’ll look into that further. Thanks!
Karen

MFF was discontinued. Bonide product called Bonide Infuse has the same main ingredient, propriconazole, and is on the market.

I use multiple Bonide products when I actually do spray and have had very satisfying results.

Oh no! That’s IT. And it sure knows how to ruin a party

Thanks for your advice and input. I have Infuse in hand and will spray tonight and lets see if it stops spreading. I will also remove those infected fruits.

Uh Oh! I would NOT use the Infuse on anything you intend to eat. Anything systemic is going to get into - and remain in - the fruit. It is not labeled for any edibles. I’d look into that before you use that!

The recommendations for pomegranates are not readily available. I had to dig and dig, just to identify the cause of the fungus I have. Descriptions and photos attached to the diseases below look identical to your photo and mine.
As far as I’ve been able to learn - it’s these: