Yes, they were. I would say barely open, like a bud that had just tried to get going. My Bud-118 had some bona fide leaves on them, but both of those grafts look great. I know that’s not great for them, but it looked like they had just barely woken up in transit so I decided to go for it. Hopefully that’s not the source of my woes.

That doesn’t sound too bad… but overall they do sound weak. You may just need to wait a month or so for them to get a little happier, and bud then. Unhappy rootstocks don’t want to accept grafts.

Sounds reasonable. I’ll do my best to keep my mitts off them until they look more ready. And who knows? Maybe some of the grafts will start to push by then!

Tough to do when you start grafting, but definitely the best thing if you can restrain yourself. I’ve had buds push, wilt then die back and still had a new bud push weeks later. If I had taken a peek to see what was up, I would have killed it.

Yes, the restraint is hard! Especially with that one overachieving apricot graft. “If that one can do it, well why not all the others?”

The scientist part of me wants to see what the healing process looks like at progressive increments, but I’d need a whole lot of sacrificial grafts for that. 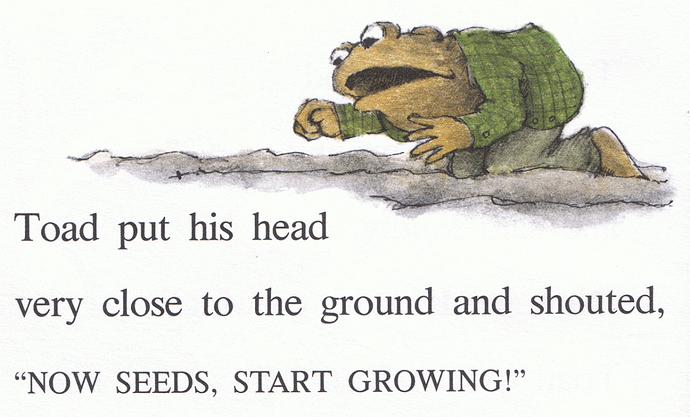 Show us some updated pictures. (All of us have a few failures I think.)
I saw a couple familiar scions on an earlier post you put up.

I will try to update some of them this evening. (weather permitting of course) I hope that at least the rootstocks are salvagable on the ones that failed but some of them may even be dried up

Some of the ones I dug up in winter and potted may not have had enough roots to support a graft, I meant to mark the ones with fewest roots and check that but I got busy and forgot to do that…

About half of my persimmon grafts are starting to show some bud break! These were grafted between 4 and 7 days ago, so hopefully they’re not getting ahead of themselves. They’ve been enjoying temps of 80-85 daytime and 65-ish nighttime, so they’ve definitely had some warmth. Probably time to pot them up before they get too far advanced. 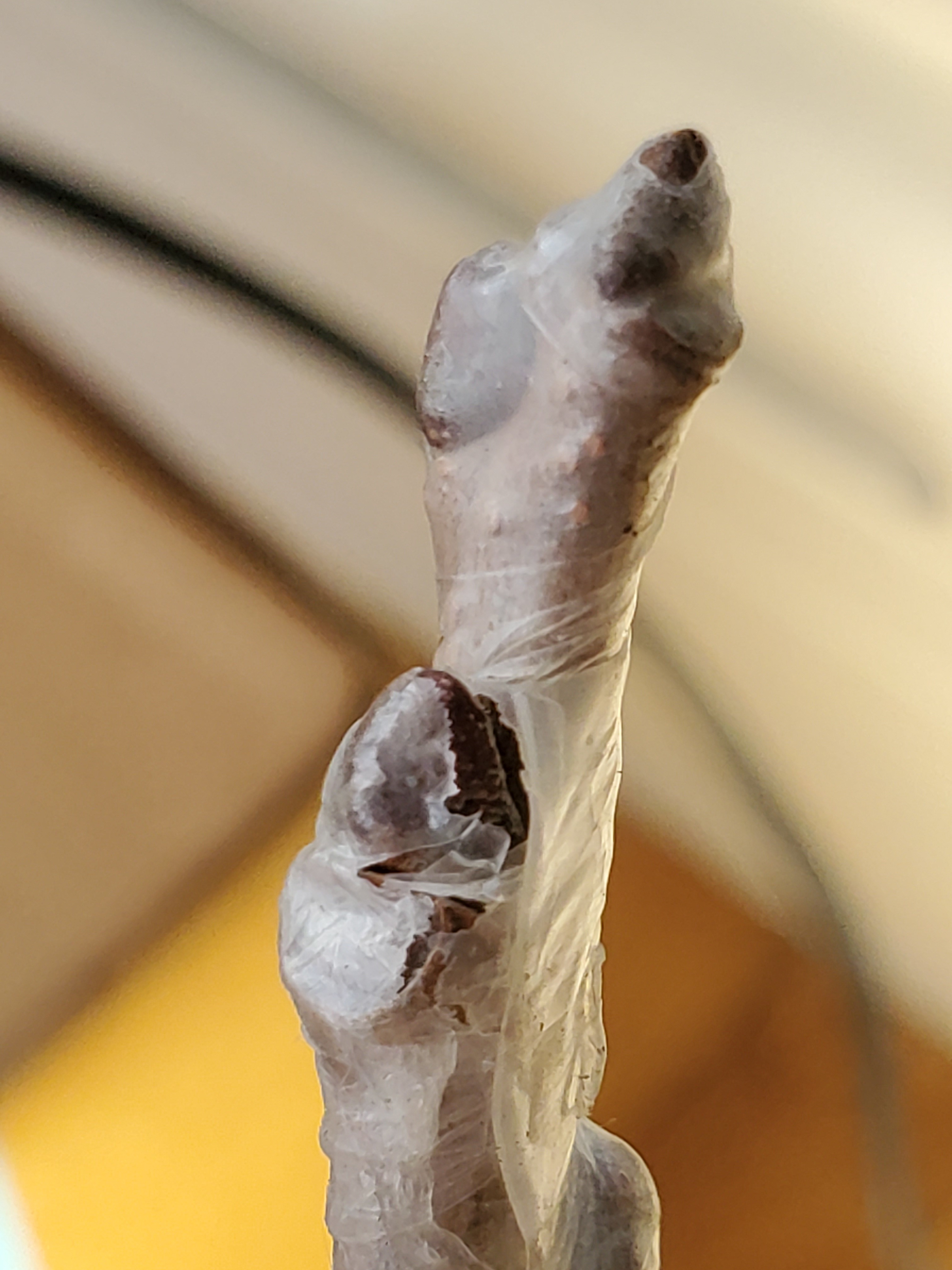 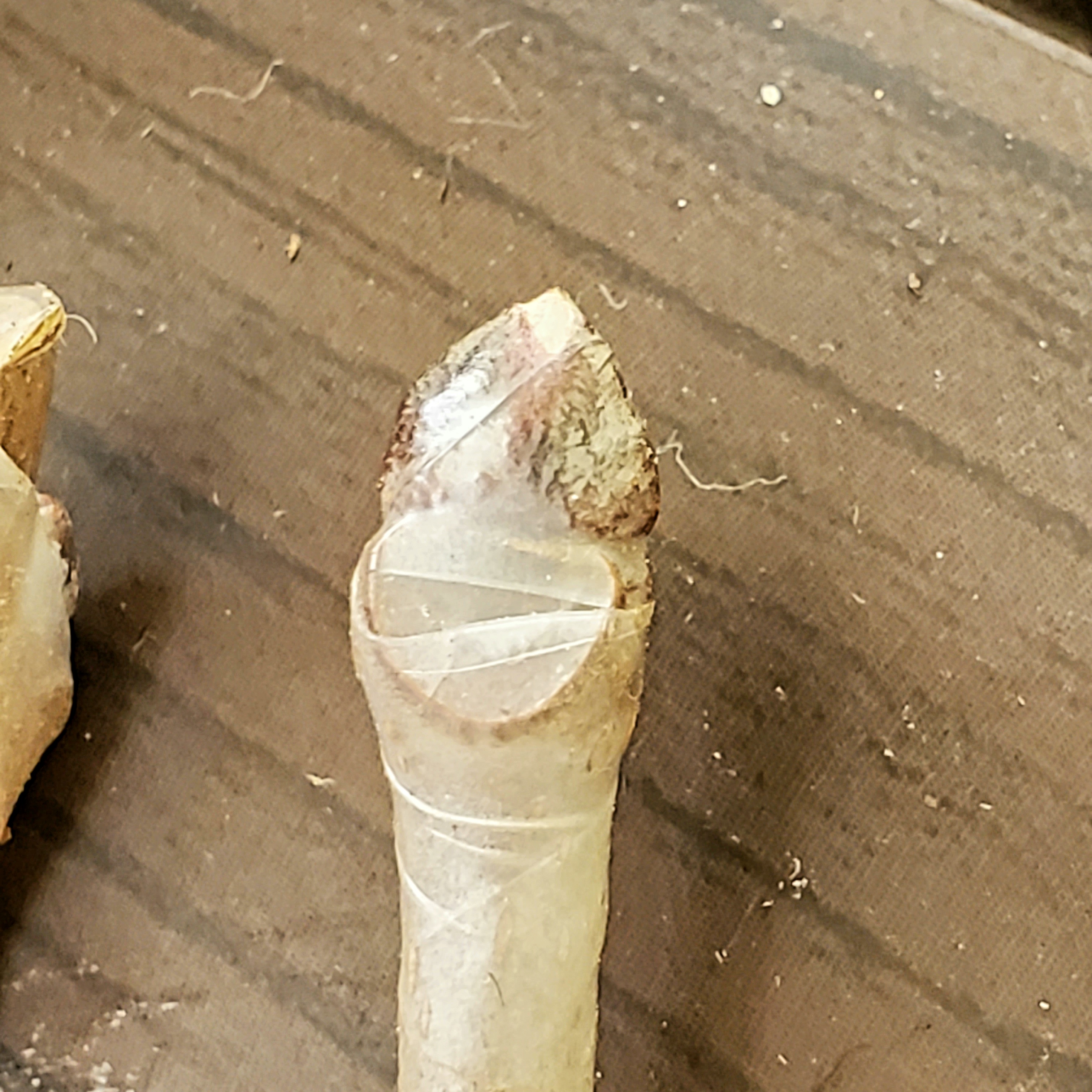 I also have a Franken-Apple I need to get pics of at some point.

I got some Apple scions late and need to add 3-4 to my Frankentree. My timing coincides with a cooler spell in the forecast so hopeful I can get away with it.

Somehow, I got it in my head that if a scion has a terminal bud…you should cut back to a lower one on the scion. But I don’t remember where I read or heard that, and thinking about it…not sure it makes any sense.

Are they in a greenhouse or something similar?bb

Not exactly. I’ve got a mudroom that’s been heating up nicely on sunny days (most of the last week) and I bring them in to the dining room at night so they don’t cool off too much. I’ve also been leaning them against my plant light and giving the whole bundle a foil hat to trap a little more heat at night and in the morning. I think I’ll stop that part now that the scions seem to be waking up, as I feel like I was risking knocking them out of place by fiddling so much. Now I have them in a single bucket that I can move back and forth.

I had thought scionwood were sticks cut on both ends…until I discovered scions with a terminal bud work fine,
in fact not only fine, but do better!

in fact not only fine, but do better!

I actually have found that sometimes they work worse for me in the long run. They are usually the first bud to wake up and push, but sometimes they do that before there is enough callousing. So as long as I have enough to “waste” a few buds, I prefer to snip the terminal buds off any scions I’m grafting or cuttings I’m rooting. I’d rather they have a few more days or a week to callous together or for a cutting to root, before it has to support the new growth. But there are so many variables I may just be imagining it makes a difference.

I can see your point zendog.

However, with the dormant terminal intact, much less issue with dessication.

And…I had some scions so little and short (from someone that sells scions)….that I discovered for myself by necessity that the terminals work for me just fine.

Then, last year, I grafted a piece of one year wood about 1/2 inch long from a tree that was dying…and is now dead…so I did not have a choice. That new whip is about 3 feet tall now from that half inch or smaller little speck of wood.

{So, this year, when I sent out scions to some folks, I left the terminal buds on…giving them the option to go that route, or snip if they prefer.}

That was my presupposition. That the terminal bud might jump the gun and dry things out before healing.

Hey, on a related note…what is it that causes grafts to “stall?” I’m a second year grafter, and looks like nearly everything took.

But at least a couple grafts broke open their bud and are now just kinda sitting there. Small leaflet…not dying and still green, but not really growing either.

Good question, and I don’t know a definite answer.

But, if it lives, it will eventually start growwing….even if a year or more later.

Is this kind of thing pretty common? 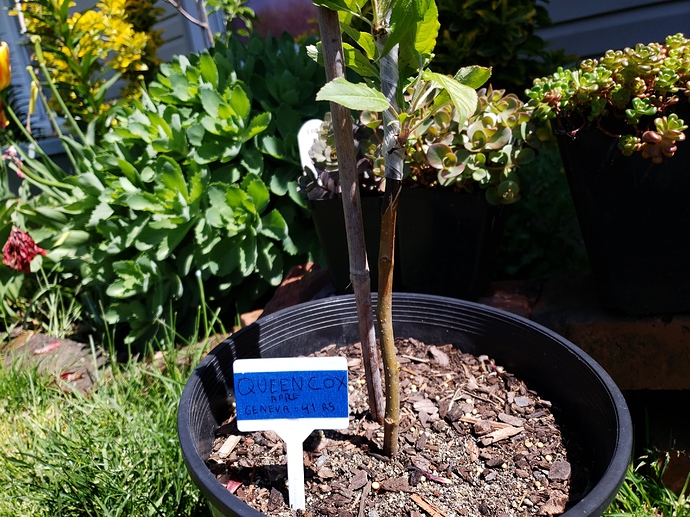 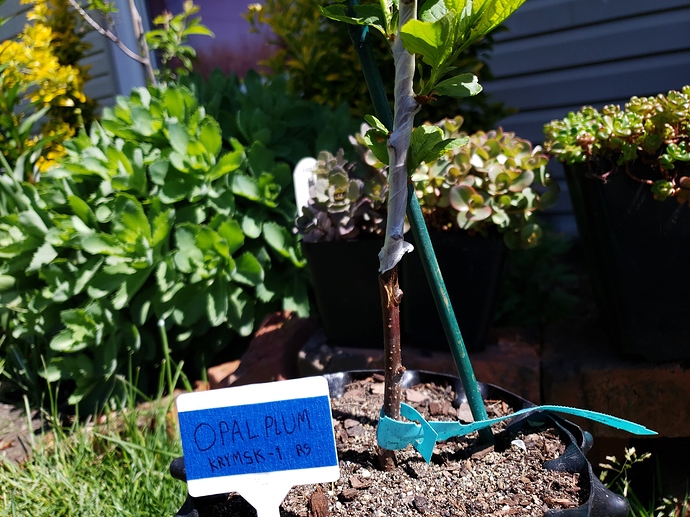 I was about to ask about the Opal apple scionood, but I see you’re referring to plum.

I do have Opal apple seedlings…and all but one look extremely healthy at this point.
All from pips out of a 3# bag of apples this winter.