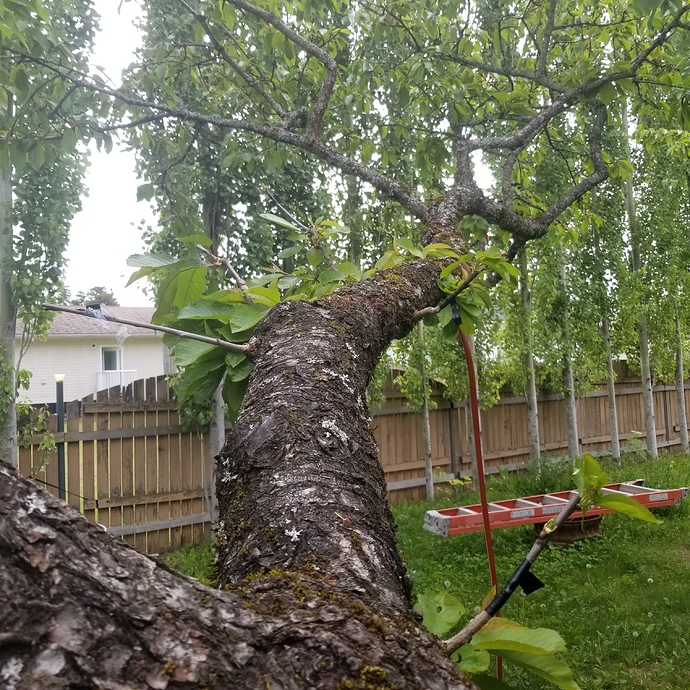 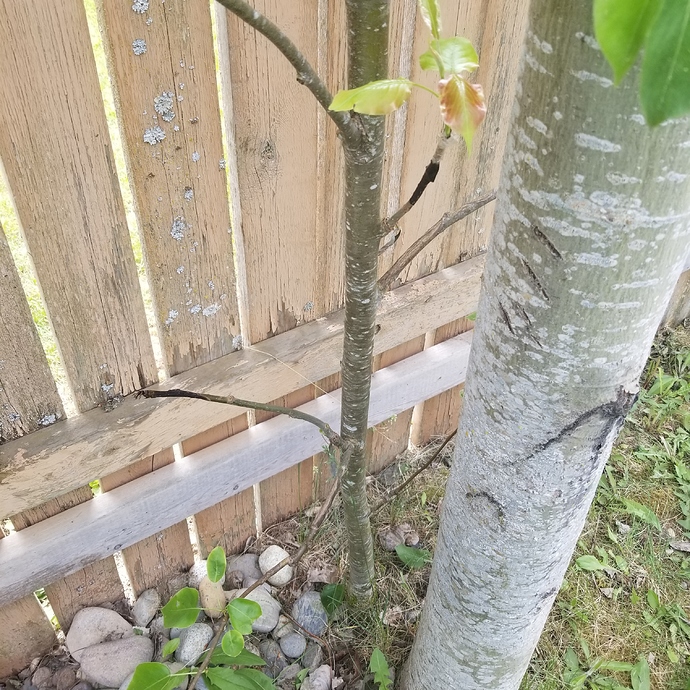 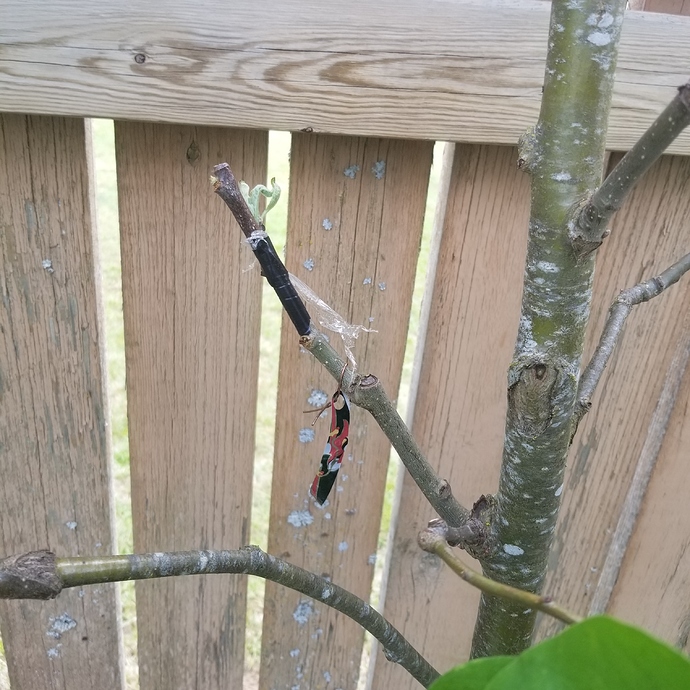 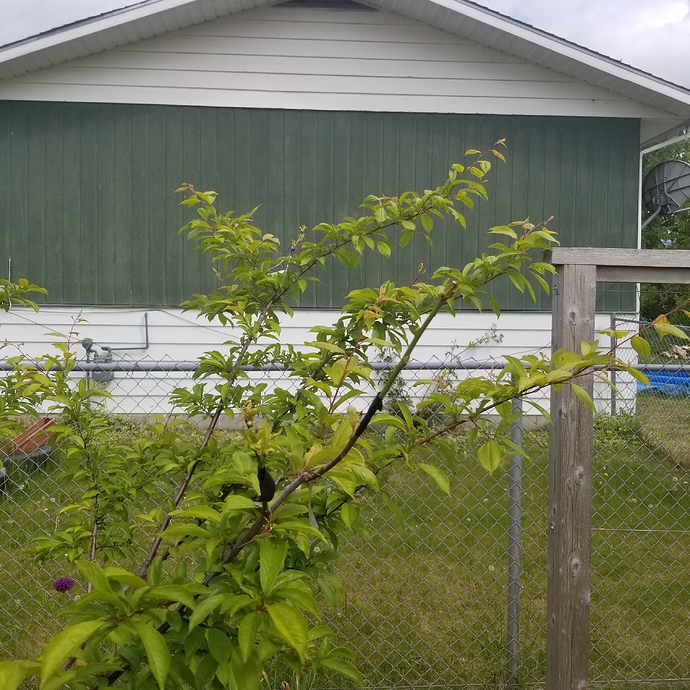 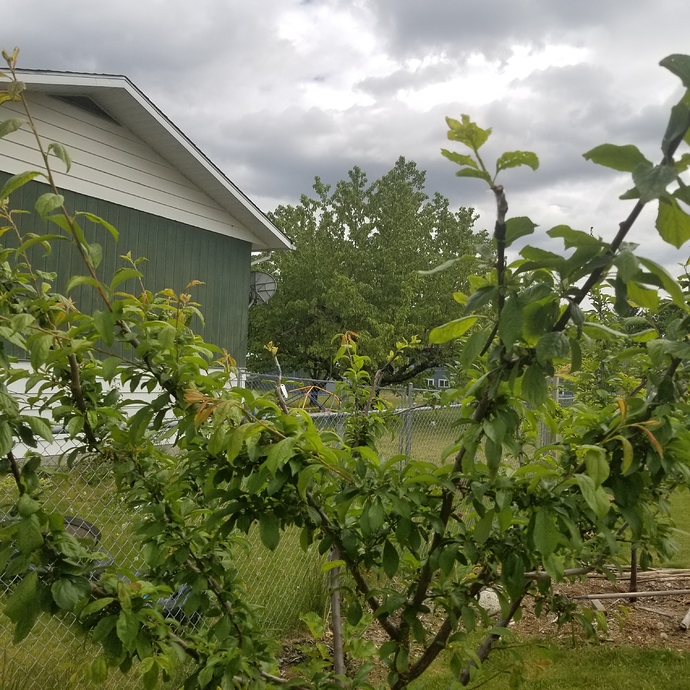 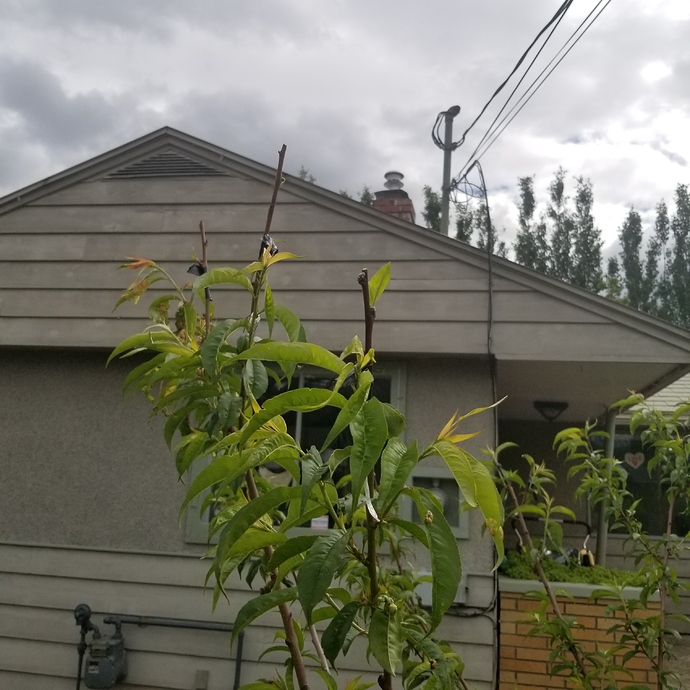 Peach and apricots only got a day or 2 of good warm weather than a week of cold/rainy. Then back to decent temps…biggest factor in all my losses is me pulling of ethylene grafting tape off too soon and desicating leaves/wood…hardest action to do sometimes is nothing…overall a good year! Also propagated a couple jefferson hazelnut from hardwood cuttings (almost as easy as currants…got the same treatment!)

I think I’ll need a bigger stake! This is that Orange Red apricot benchgraft at 6 weeks. I’ve left the backup branch for now, but am not letting it grow much. I also got Tomcot to take, but it’s just waking up now. Zard, the graft callused but the stick died. The scion had a darkened end which I had trimmed off, so it may have been doomed from the start. I’ve also managed to nurse along a successful pear graft on those wimpy BET rootstocks. I’m now regrafting them one at a time as they start to be more fully awake.

My apples both look good, and my bucket of persimmons are waking up one by one. I hope I get more than a 10% success rate, but I’ve got at least one each of Prok and JT-02, so I’ll at least have what I need. 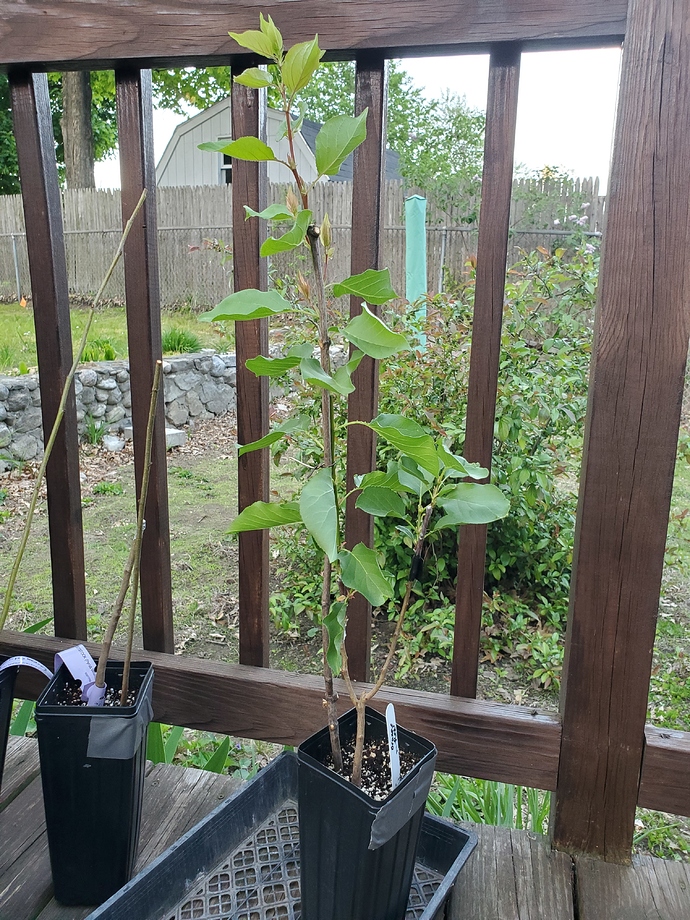 I’ve got a bunch of persimmons grafted and most have pushed growth, a few almost 6 inches. A couple are still showing no life a several are showing some green tips under the parafilm, so overall I’m very happy with what looks like good results. I’m wondering if it is time to give them a little liquid fertilizer or if it could have a negative impact on those just starting to show life. They are in a soil less mix with no added fertilizer so I think at this point are basically running on the nutrients from the rootstock. Can a give them all a light feeding? 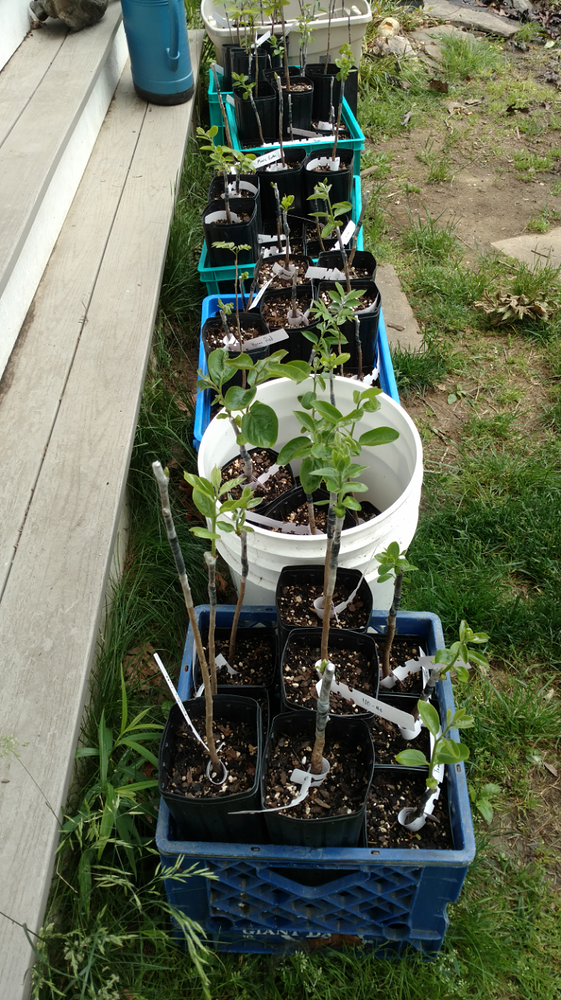 My go to graft is cleft. I’m really bad at chip budding. But sometimes I do it when I have no choice. I did this plum chip graft about a month ago and I thought it would stay dormant until I force it to grow. But I didn’t have to do that. It started growing on its own…strongly!! Happy it was a success! 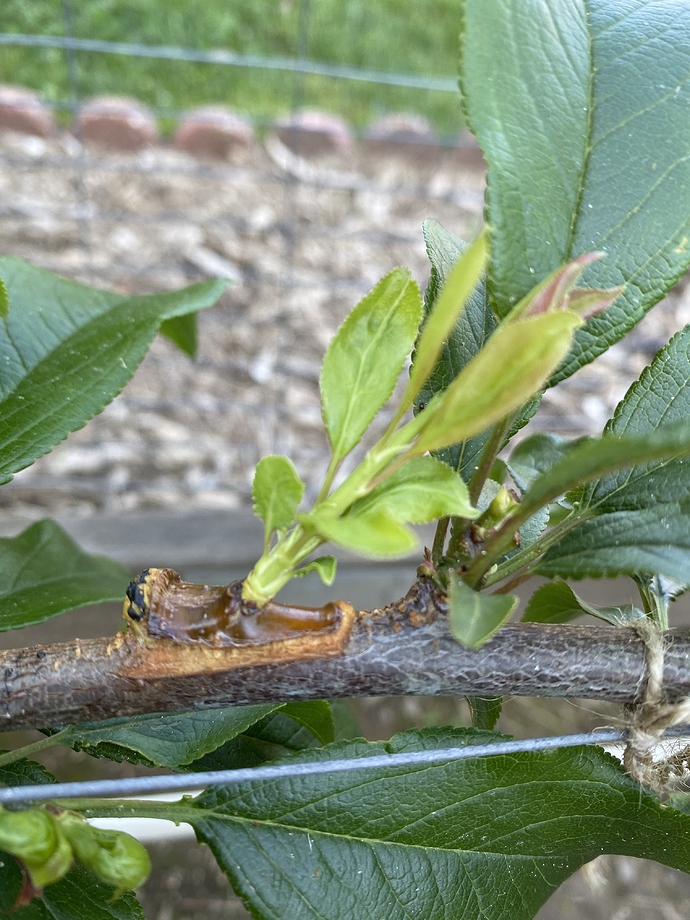 Jujubes—not nearly as good a percentage. 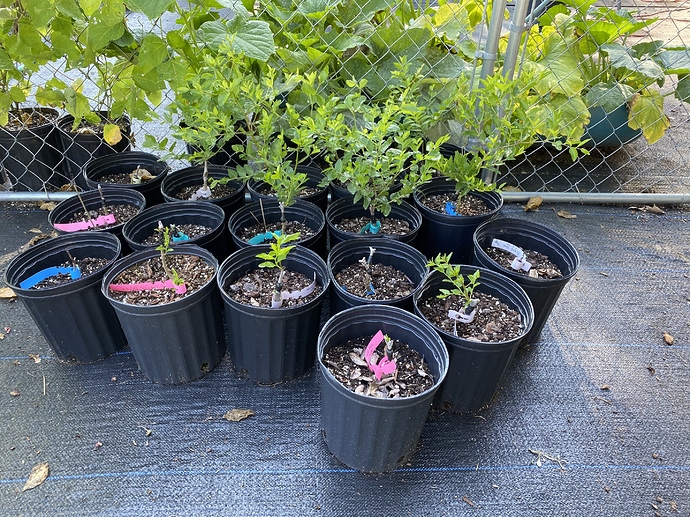 And my chip buds are progressing 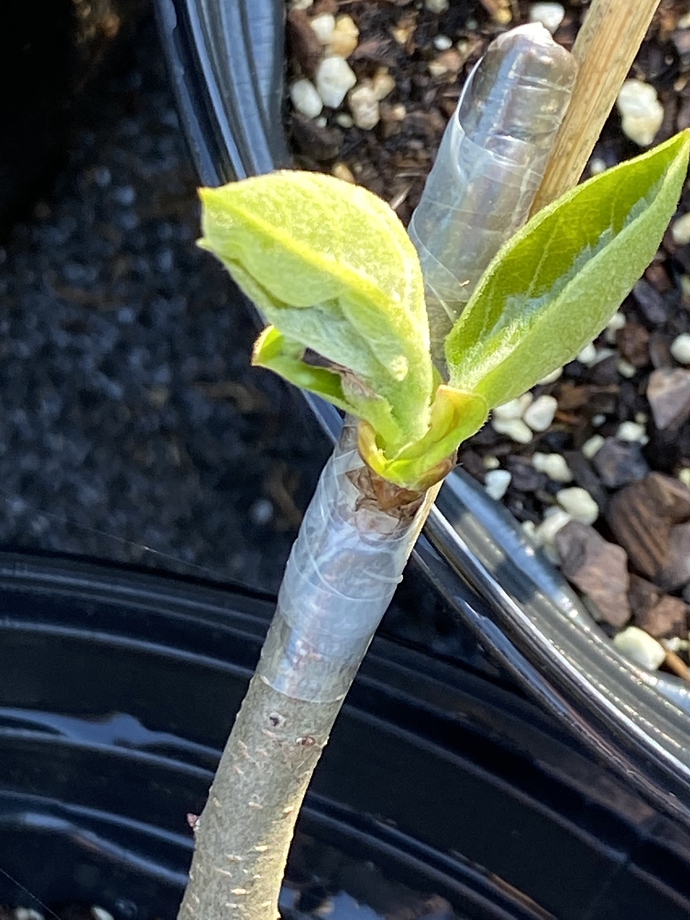 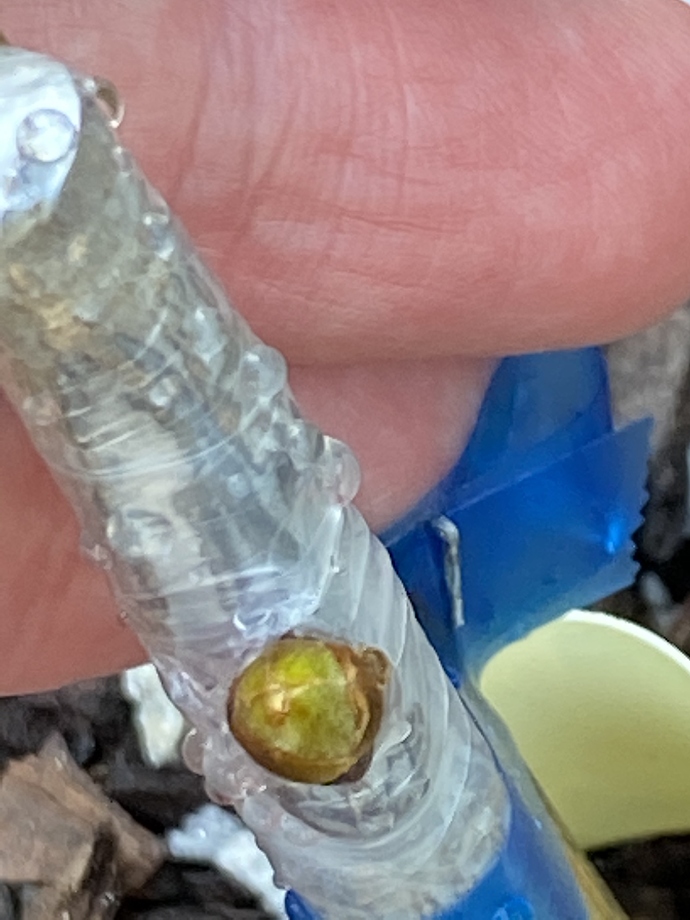 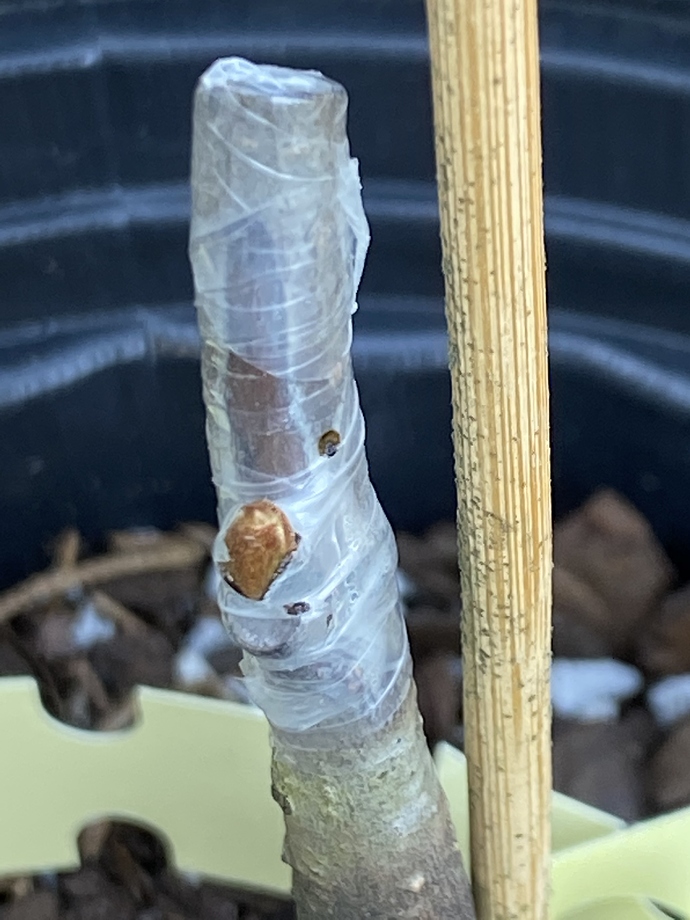 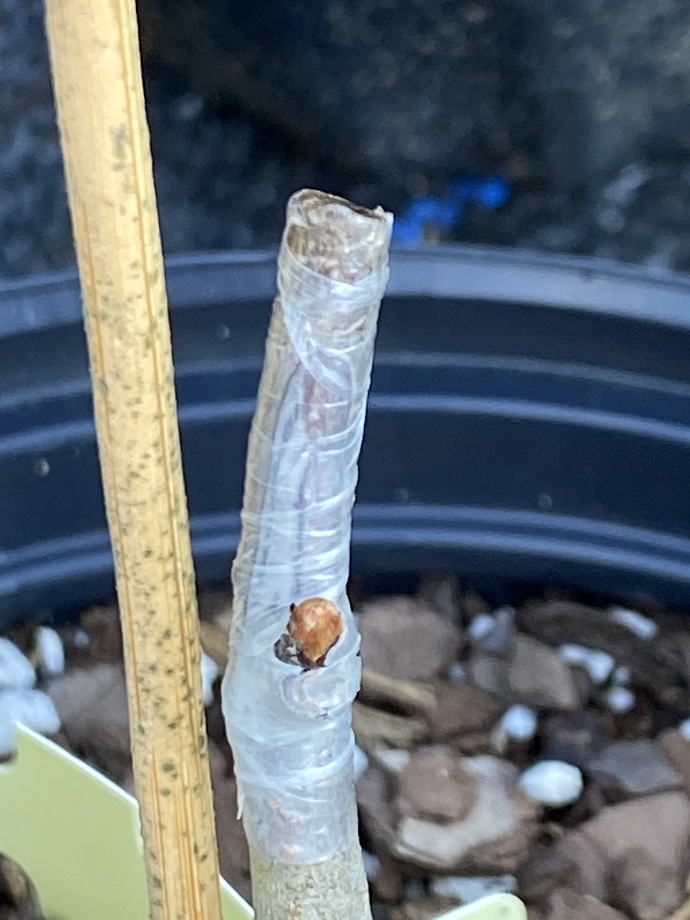 I have had several failures but still many successes. I think only 1 pear may have failed. I think the problem was some of the rootstocks I grafted to had very little roots and after moving them several times I forgot which ones I meant not to graft to this year and let grow out

I will try and get a few pics to update as the ones that have made it seem to be growing very well!

About 90 % on apples for me…on multiple rootstocks, with B118 perhaps having the best %.
About 80% with pears.
And zero success with some pawpaw grafts. (Might have to think in terms of budding).

From Yesterday. These are the bareroot’s I did using a hot callus pipe this winter. Hickory, hican, pecan = maybe 95% success. Anything on walnut pretty much 0% but probably 5-8%. I wonder if black walnut being the rootstock couldn’t handle the dampness of being wrapped in towels and bagged with plastic after. Walnuts won’t grow where it’s too moist. Persimmons, excellent. Pawpaws, excellent. Very good results. So 173 grafts that came from my refrigerator as I grafted on the pipe, they were then placed in a refrigerator being dormant still and 2-3 months later I removed them (still being dormant) - (unwrapped the bud strips/tape for confirmation of a successful to be POTTED) and have been potting them up. Next are my potted grafts that also were done using a hot callus pipe. Dax 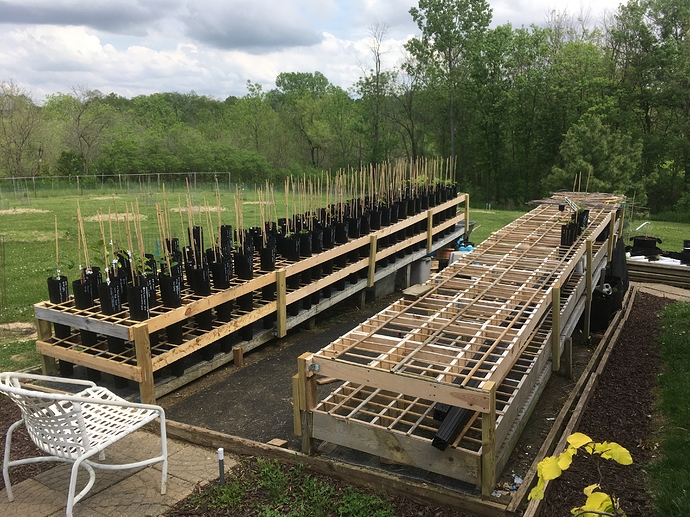 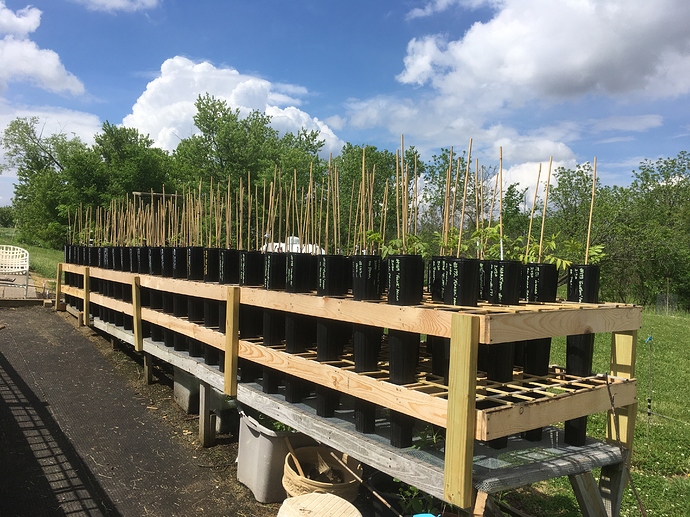 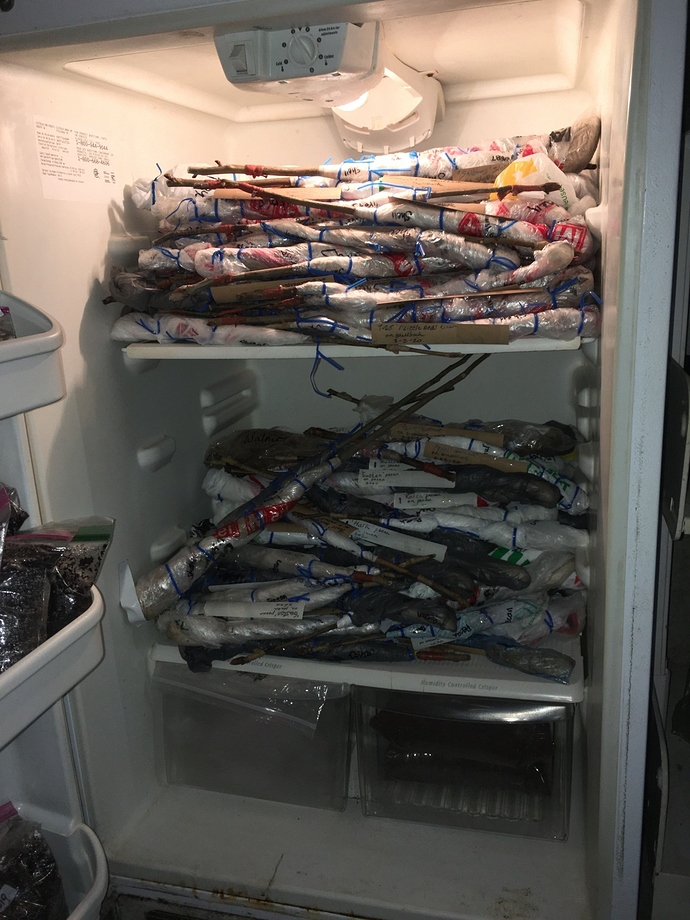 The chair in the pic gives some scale to how big those pots really are!

I thought I was being clever labeling each persimmon graft with masking tape in addition to the in-pot labels. However, it turns out the tape is great at letting rootstock buds develop unnoticed. Took all the tape labels off, probably found hidden buds under 1/4 of them.

I’m also finding I dislike electric tape on persimmons for the same reason. I’ve had to unwrap a few grafts to remove buds that were starting to look like tumorous growths, and were more damaging to remove than a bud growing in the open. 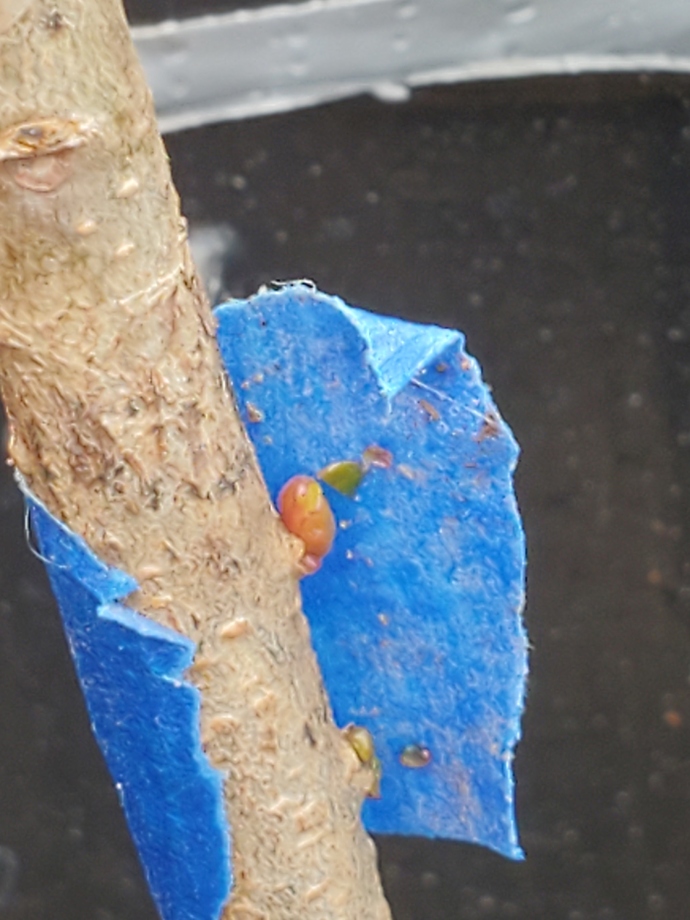 I just had the same problem with shoots coming through the parafilm I had wrapped around my grafts. I think I split most of what was left of the parafilm trying to discourage the stock shoots…

Those buds even come through the Temflex I use. I usually just fingernail them off through the tape. I just damage them enough they aren’t going to grow and leave my tape in place.

That is exactly what I’ve been doing to the buds.

Most of those I was able to do that, but there were a few that just stayed stuck and started turning tumor like. I think the difference is in how many layers of tape were over it. The way it changed the growth actually reminded me a lot of bur knots. I may experiment with doing this intentionally and seeing if cuttings with one of these deformed buds will root.

My buddy was able to I believe in a callusing pipe have pecan grow shoots and leaves from Callus, Jay. He told “somebody important” about it suggesting tissue cultivar for pecan cultivars and they either returned his email or told him over the phone that the event he saw perfectly clear was impossible.

What you’re talking about Jay are adventitious buds. There nothing more than that. They get squeezed behind tape and swell up.

I’ve been (now finished pretty much) tututoring this young kid ‘everything I do’ and he told me that he finally decided budding strips were favorable for him as they are for me. Budding strips allow for easy removal but, you don’t see buds under them until they swell, however, there are times they grow between the wraps around of the strip and you can easily knock them off as either small, medium, or large growths.

Adventitious buds also form on roots and they make a jet for light and that’s what you end up with for suckering of trees that normally don’t sucker (often) such as pecan. Pecan will sucker if you cut a tree down but otherwise it doesn’t sucker. Grafting and stress on the seedling from the grafting create those growth points.

Good luck with your rooting, Jay. I’ve not tried that.

Sounds about right. I’m curious what was going on with your friend’s callus shoots.

I wasn’t sure if they were adventitious or regular buds. Didn’t pay that much attention when wrapping. The squeezed/swollen buds, whatever their origin, seem to not differentiate, which is what makes me think there might be a slim chance it will root. I have plans on trying out a few methods of etiolation that researchers in Japan and the US have had success with to root persimmon cuttings. The squished bud is pretty effectively etiolated, so I think I’ll throw that in to the mix.

I started grafting about 4-5 years ago and had great success (90%+) with apples and pears but as with many people, I had poor success with peaches and nectarines that are my favorite fruit. I usually started grafting as the trees came out of dormancy and never paid much mind to the temperature.

I had the crisper bin in my refrigerator filled with scions but was waiting for temps in the 70’s… On April 14 with trees fully leafed out and temps still in the mid 60’s, I decided to start grafting anyway. I had 80% success with my first 10 grafts. All pushed within about a week.
This was the result: 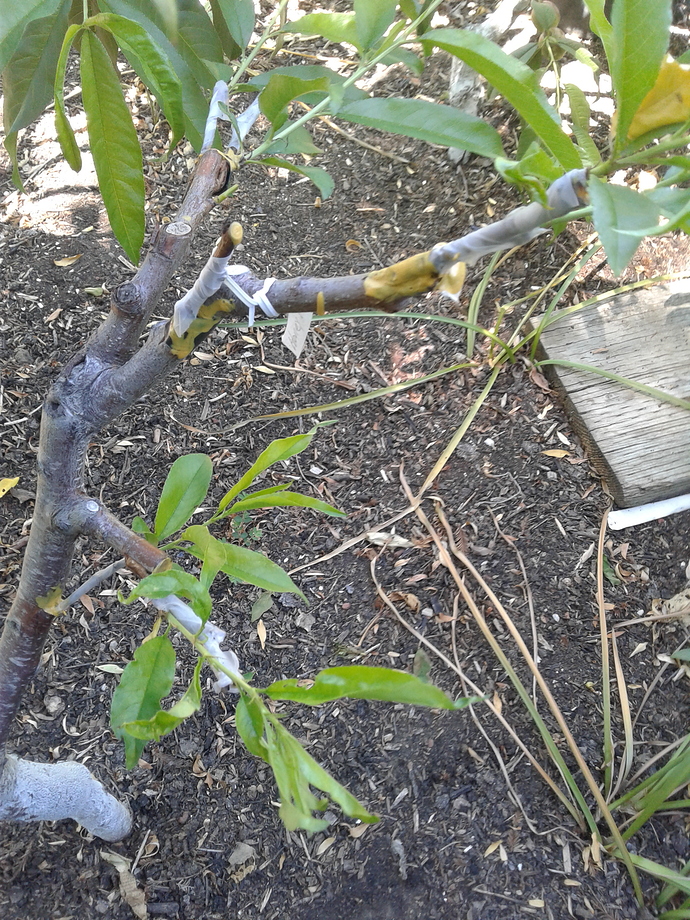 Two days later, I did 10 more (each takes me 15-20 minutes). For some reason only 2 pushed initially, others almost a month later. 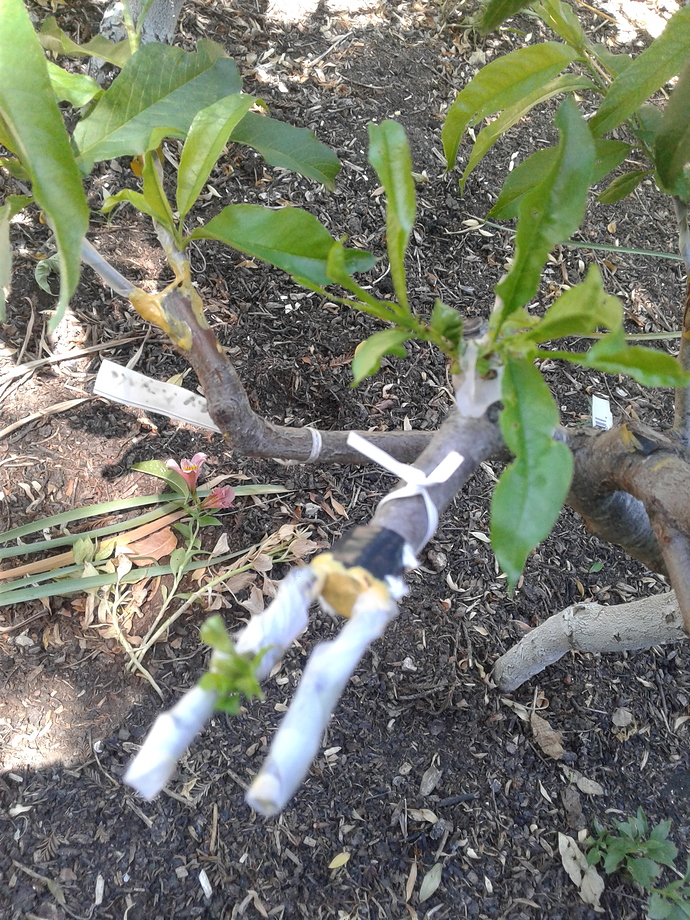 Grafts done April 16, 2020 on May Grand nectarine.jpg1932×2576 2.67 MB
The two on the left pushed at about the same time as the first batch, the others only much later, the one in the foreground only pushed a couple of days ago.
Btw, these grafts are on two sides of the same tree.

Initially I was really stoked by this success, but paused my grafting waiting for warmer weather.which finally arrived April 23 and I again commenced grafting. Since then, not a single one of those grafts has pushed. I am thinking that, by waiting for warmer weather I may have missed the initial surge of sap as trees broke dormancy and all energy has been directed to new growth. Thoughts anyone?

Looks good Dax. I can see you have been working hard. That’s a lot of trees! Are you selling those or do you have that much land to plant those out? I look at all those trees and picture them all fully grown. I felt bad cutting down big mature hickories last fall for a guy building a house. Trunks 16" in dia growing straight up to about 80 -90’! I feel a bit better seeing how you are growing so many.

That would be a very difficult thing for me!

I’m selling them & planting a couple of each variety for scionwood sources. I’d like to sell wood as much as graft. It would sure be easy to cut wood and ship it!!