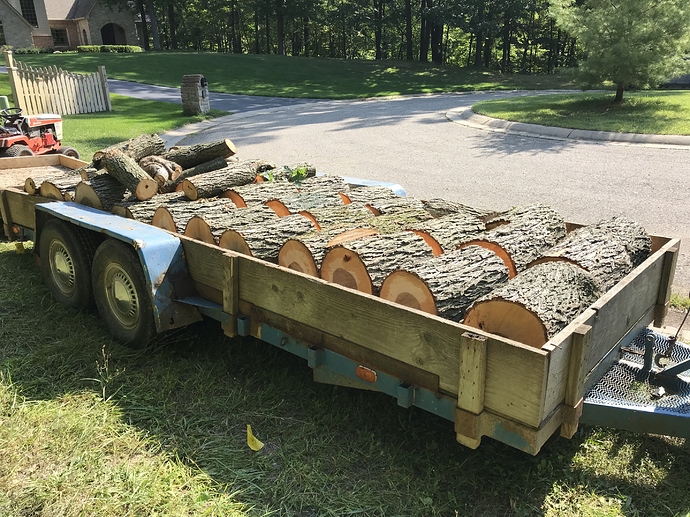 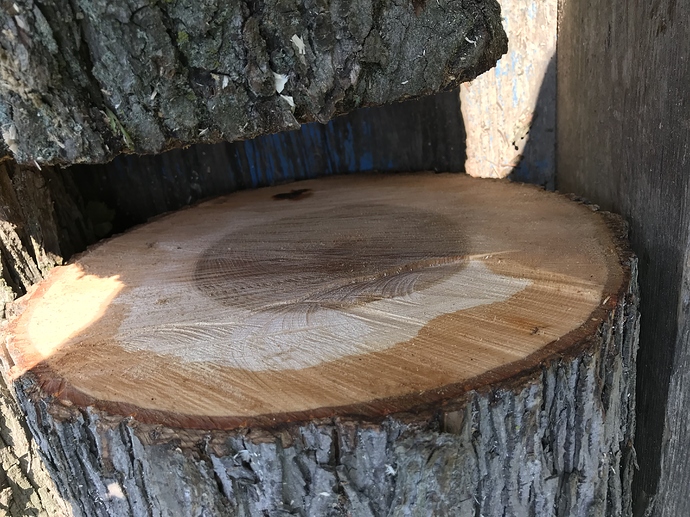 Randall, I like temps in the 50’s at night and 70’s and above during the day. That’ good stuff for nut trees or more difficult stuff.

When these temps arrive you can go to the rootstock about 4" above ground and with a drill pass thru one direction and go a couple inches above that and pass thru the opposite direction. You do this a few days in advance or a day in advance, but, preferably two.

If you’re going to employ bark grafting, you should also cut the trunk off a couple of inches above where you’re going to lay the bark grafts or insert the flap graft. Let them bleed for a couple days. When you return to graft you either make a fresh cut again or using your knife you “knick off” a quarter inch below the cut the bark/“everything” until you hit pith. Just kind of scrape it away in an upward direction. Start underneath your previous scraping upward and removing 1/4". There’s your spot to insert a bark graft. This way it’s a quick fix with the knife vs. cutting the whole thing off again. You need fresh “tissue” to insert a bark-scion-graft.

Flap-grafting, do the same bleeding of the tree and sawing off the rootstock trunk, in advance, and when you flap-graft/banana graft you have to saw it off again to begin your work.

Johnny they’re such gorgeous trees when they’re old. They’re like oaks in canopy-form. I’ll have to shoot a photo over to you of one at a grafted collection of nut trees towering as tall as your seedling where shag hickory dominates the landscape. I’ll bet I know where it is. I’ll post now. 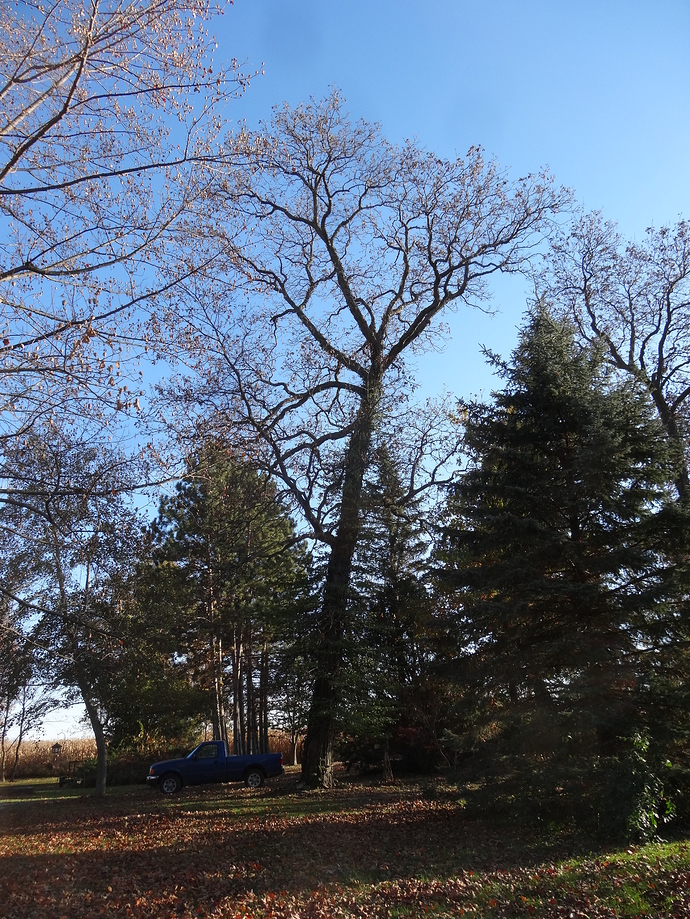 An update on some of my grafts. This is both pears and apples. 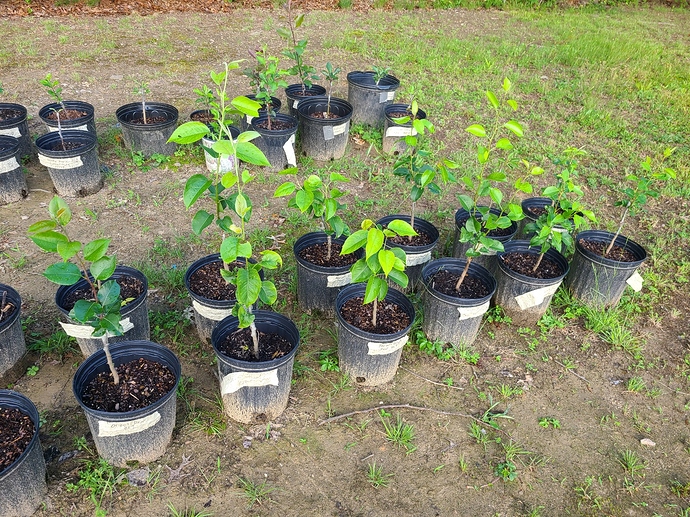 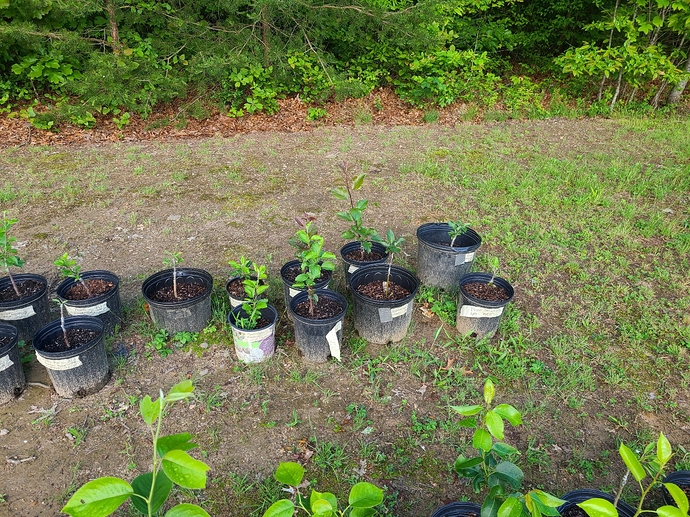 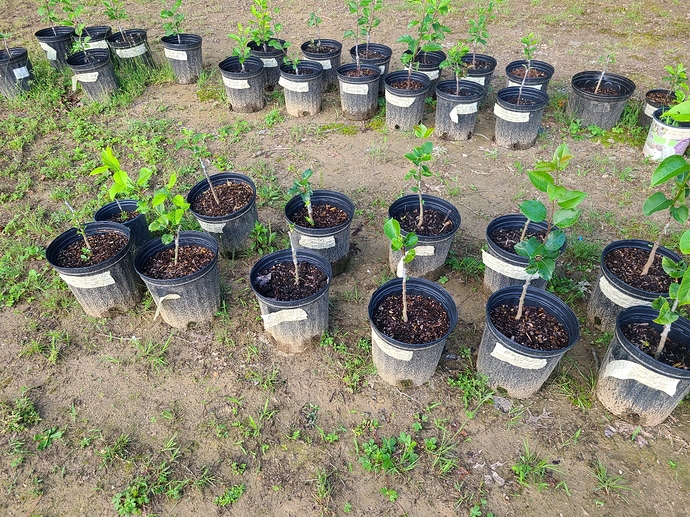 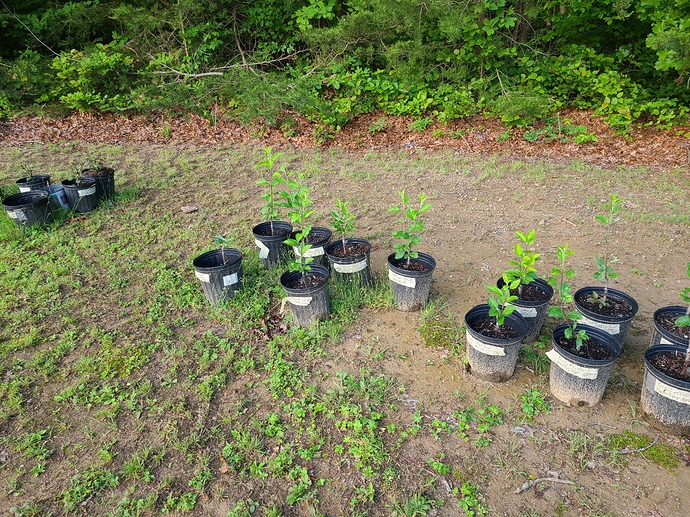 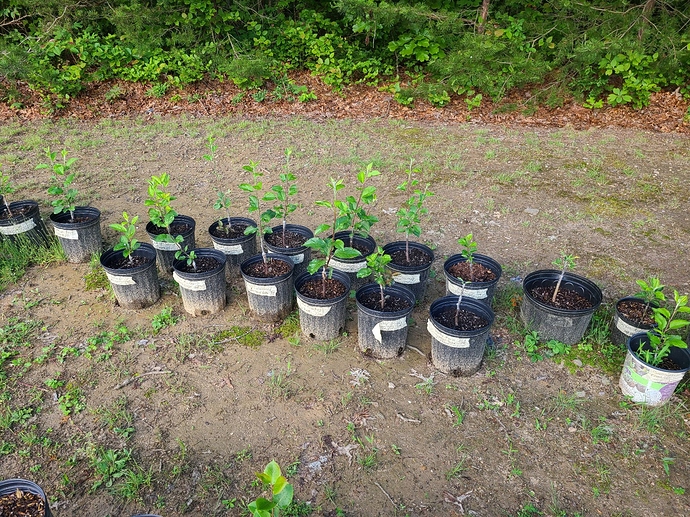 Happy with the progress they seem to be making and really hope these all make it until Fall. I will then put them in the ground and put a small wire cage around each of them until they get some bigger

Yes, wire cage them or the rabbit or deer will eat them all up.

I’m up to 8/21 definite takes on persimmons, with a few more that I think are waking up. It’s interesting how each one is working on its own timeline. All but one of the definitely awake grafts is Prok, which is surprising because the JT-02 that’s growing had a 2-3 day start on Prok.

This apricot benchgraft has close to 2’ of growth at 7 weeks after grafting. No signs of slowing down, and it’s starting to be difficult to keep watered. Any reason I shouldn’t transplant it out once I’m sure the roots have mostly filled out the pot? 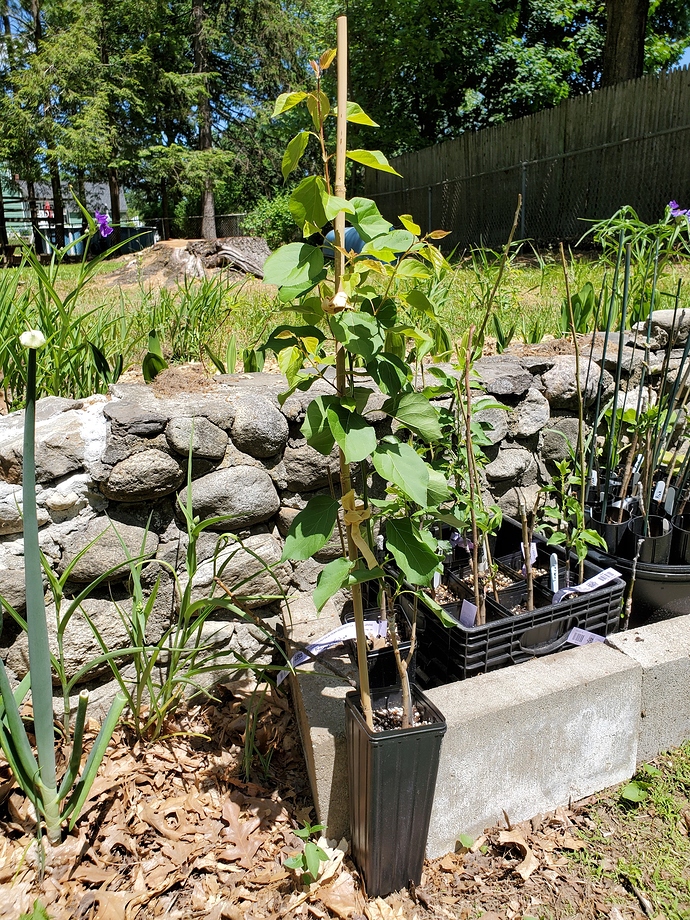 nope, plant it. plant anytime from a pot if you have a hose that reaches. use mulch too.

I got a bit of information for you. My buddy was over yesterday and said that the name Bill Gustofson (if that’s spelled right) was an academia writing his thesis about callus not being able to generate tissue that could further be culture-grown. He concluded it was not possible.

My buddy was able to do it as necessary thru steaming grafts in mulch or some substrate. I think he said mulch. Had to have been simple: heat mat with layers of grafts above between a pretty sterile mulch. Some people use peat but, that’s difficult I concluded; it dries too fast.

Anyway, My friend Gary Fernald had the graft (pecan it was) callus on the union - and then the top of the scion callused making a full ring that while later if left in this environment produced exactly what the professor said was impossible! ha!

My buddy and Bill Totten, my other buddy were ready to take this to tissue culture and patent it and they didn’t do it but I don’t remember for the reason. It was not near to today’s date. So, that’s it, and, you should be able to find a thesis.

As to your rooting, Jay, he said it was possible and I kind of forgot everything we discussed. I believe he’s already read about that or produced it his-self. I’ll text him.

I brought up the point about adventitious buds & that in my conifer days of that time of my life where that’s all I read about/a huge majority, there was talk of “primordial buds…” and I was trying to remember how they differentiated from adventitious… and I’m pretty sure my buddy Gary Fernald said those are the ones that the roots make that must be rubbed off on rootstocks during grafting.

Of course, my regards. Gary says, ‘good luck basically if you follow/make progress on what he knew…’

alright Jay et. al. so etoliated growing points are undifferentiated. They’re white of course and they could become roots or shoots with leaves. “undifferentiated.” There’s scientific data on it says my friend.

@Barkslip that’s some cool stuff! I wonder if you could apply the same principle to airlayer trees that would be impossible otherwise? A hot callus airlayer, as it were. Not sure if it would have any economic advantage, but it would be neat if it worked. It also sounds like it will be worthwhile to pursue my persimmon rooting experiments with electric tape in the mix.

And thanks for the reassurance on planting out the potted tree. This is my first time working with fresh grafts, so I wasn’t sure if it would be more sensitive.

Alright, here goes my first post on this great forum (been lurking for a few months). Hope I don’t screw it up!

I’ve started my first orchard this year and amongst a handful of established bare root trees from fedco and a few dozen seedlings I started (that may be a future post) I bench grafted 10 heirloom varieties to bare root antanovka using the whip and tongue method April 26th and planted them in the ground that same day. Pretty ballsy considering my property looked like this 2 weeks earlier (but that’s Maine weather for ya…lost power for 3 days): 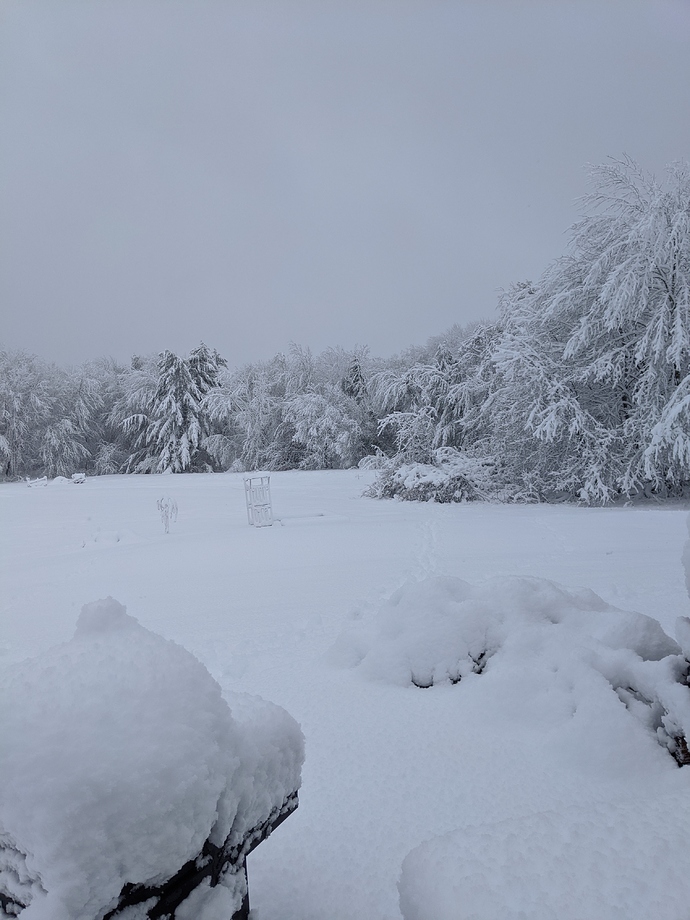 Fast forward 6 weeks from planting and we have the following results: 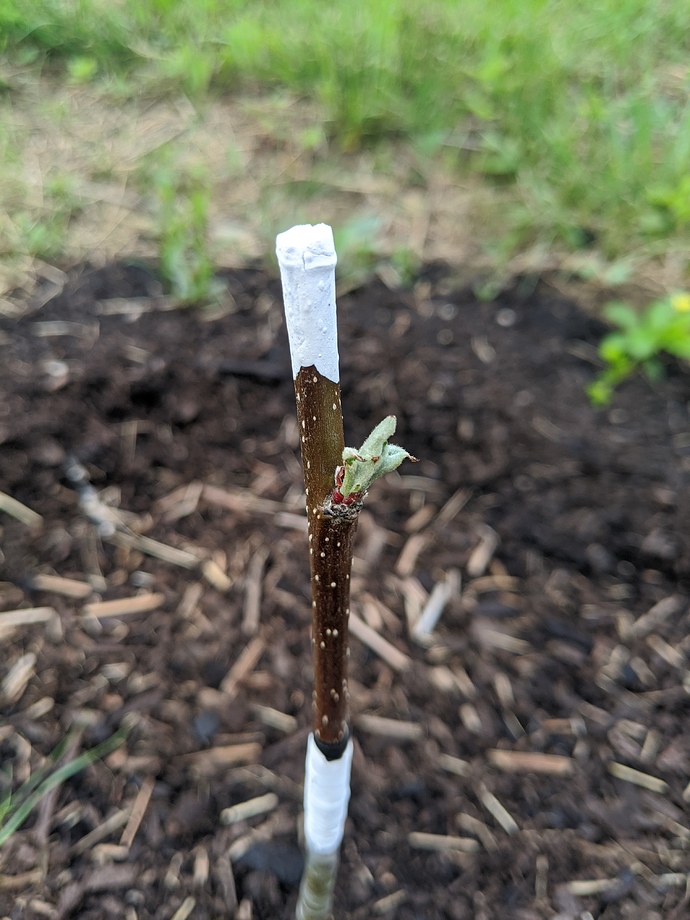 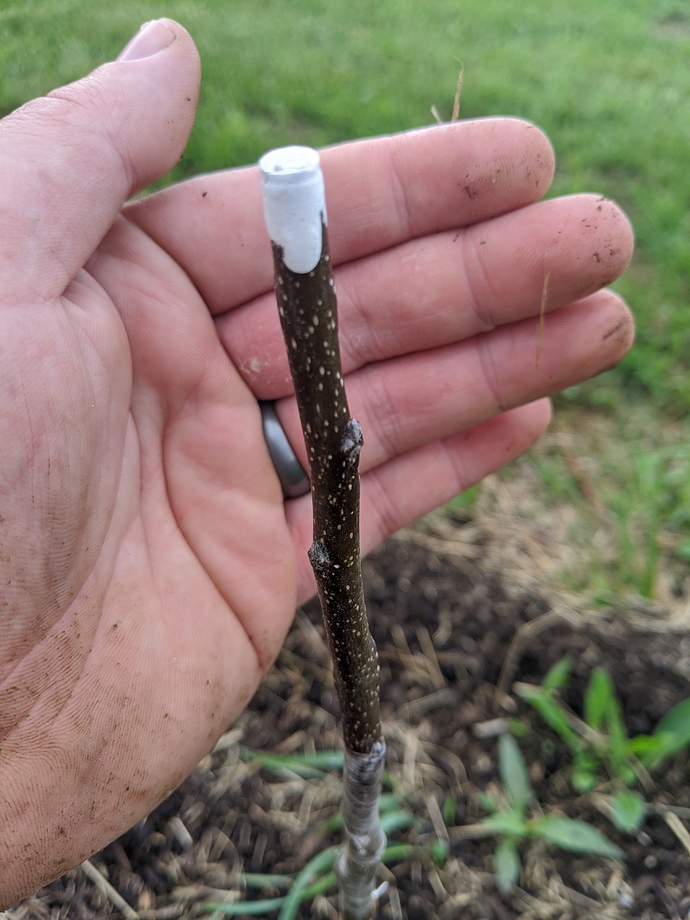 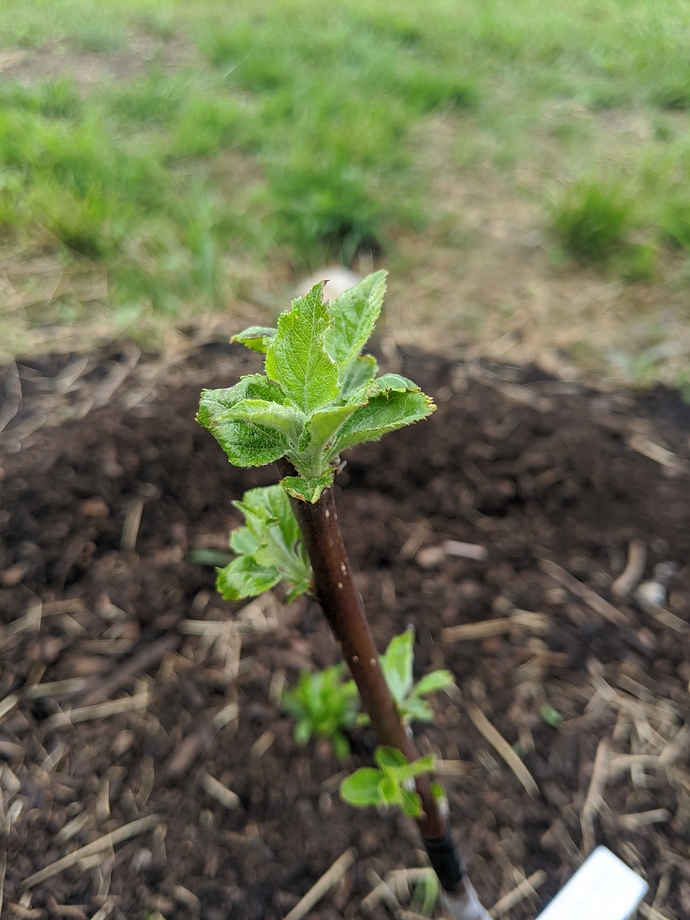 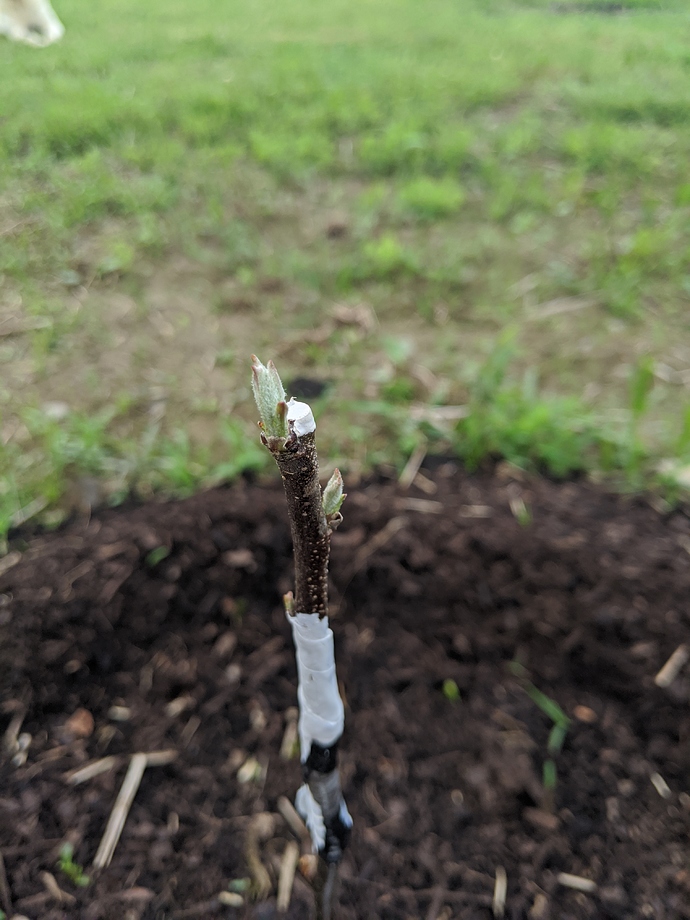 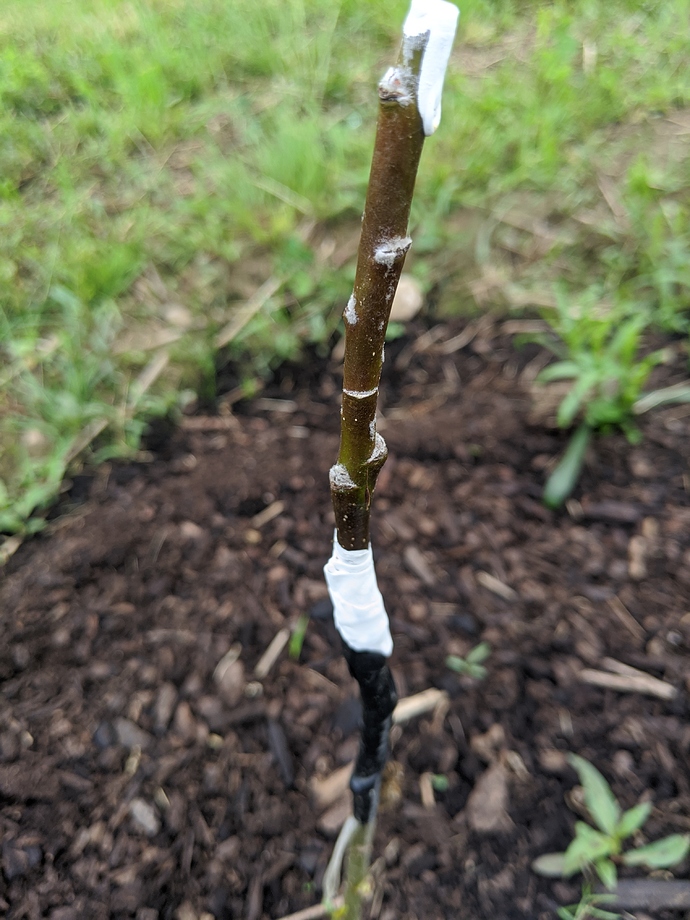 Turley Winesap (this one originally had the terminal bud in tact…it didn’t do anything for 5weeks so I snipped it off and it popped the next week. Might be coincidence) 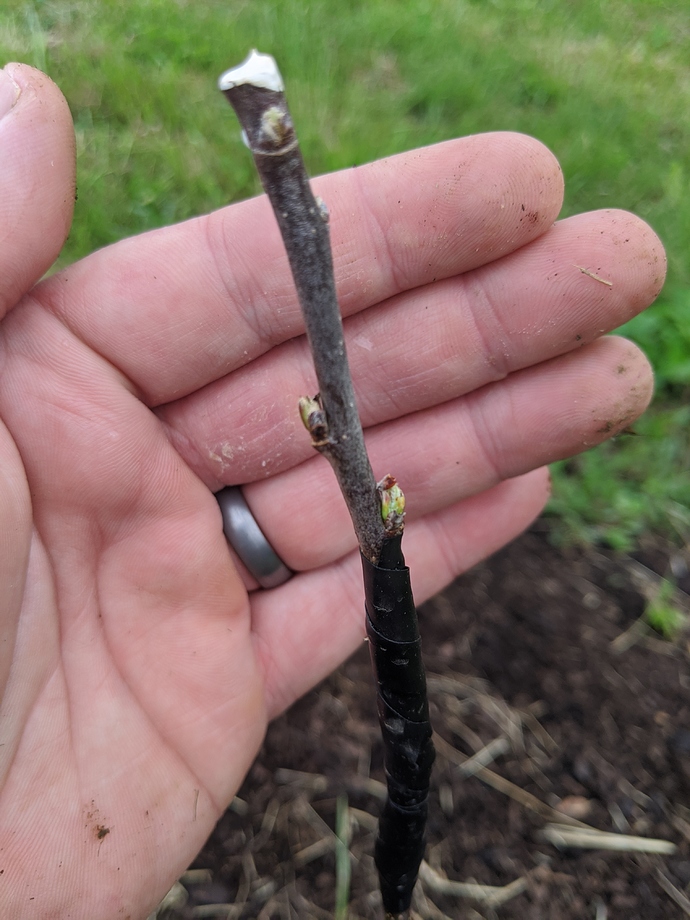 Grimes Golden (this was the first to pop…but has sat still for a few weeks and has been passed by several others…might be a slow rootstock?) 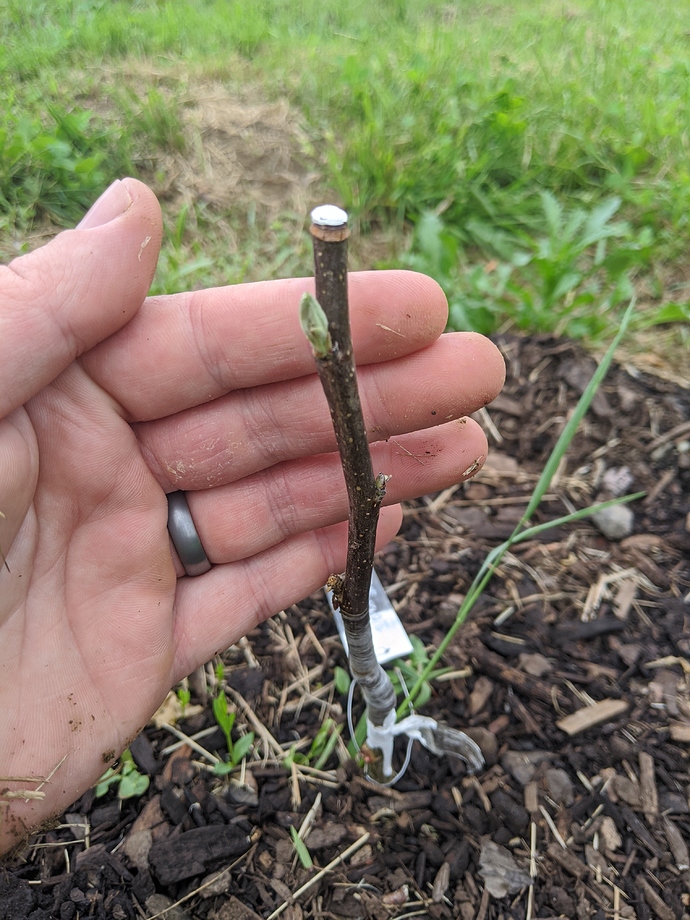 St. Edmunds Russet (took 5.5 weeks to pop but boy when it did all 5 Buds went at once!) 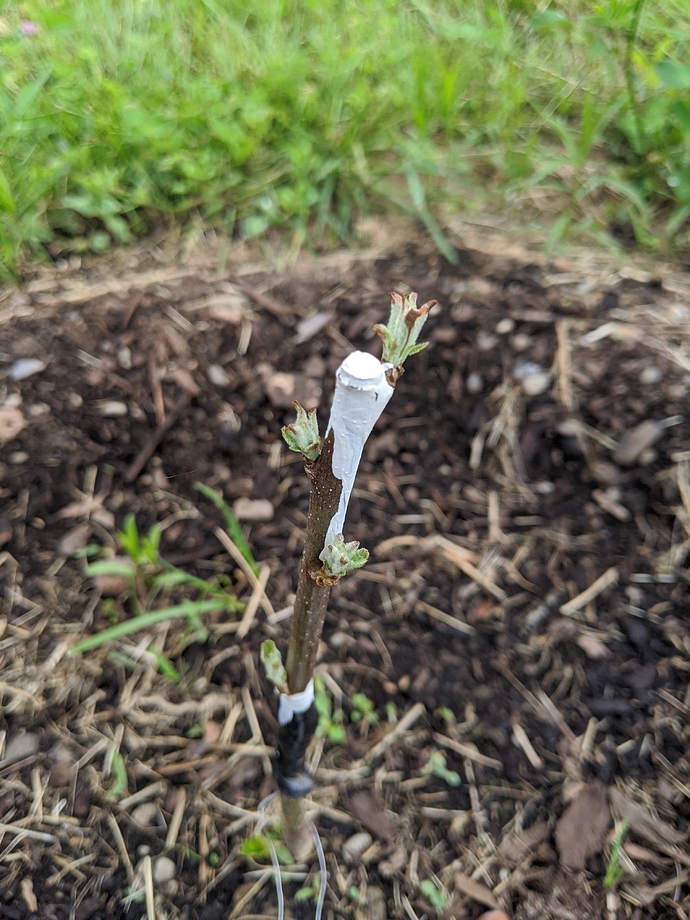 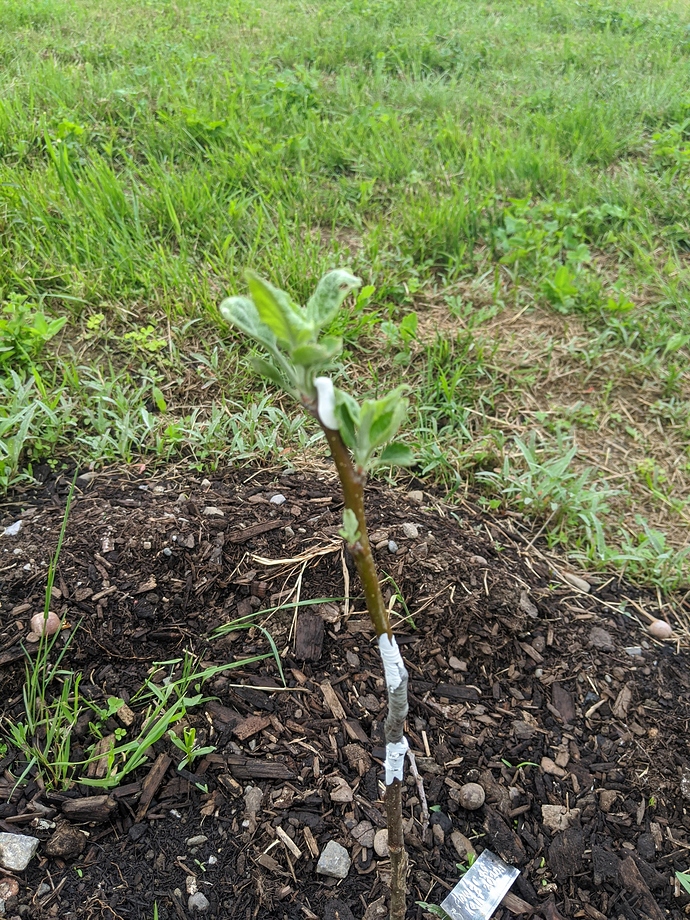 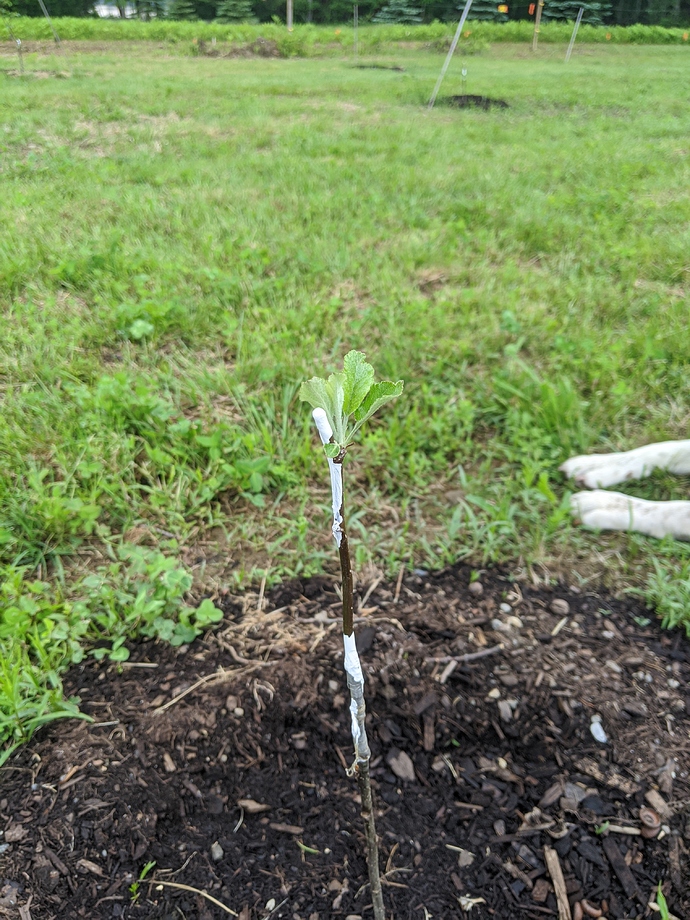 Also an interesting note. In my area (Midcoast Maine) we have been battling the invasive brown tail moths for several years. To give you an idea this is what they have done to the oaks on my property (it should have been fully leaved out…): 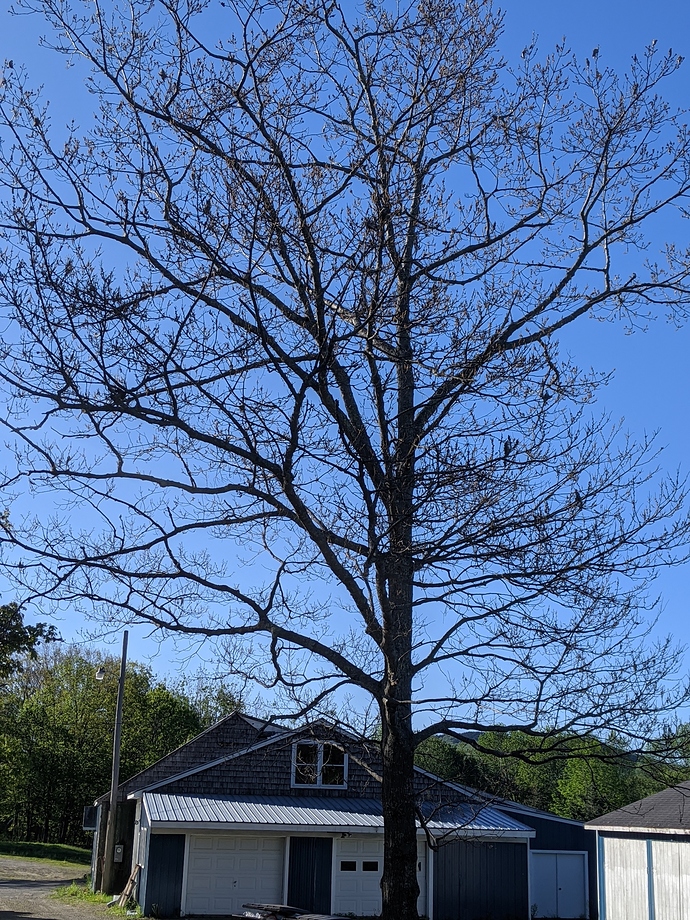 The moths lay mostly on oaks but they have been crawling through the field all the way to my apples. To add insult to injury we have also had to put up with the ever invasive gypsy moths as well. The caterpillars were chewing on the buds of my grafted scions before they could even grow! So along with hand picking twice daily and spraying neem oil…I discovered a little trick if others ever have this level of predation…I let a bud grow low on the rootstock (even though I know it can rob sap from the scion buds) so that the caterpillars would stop there for a snack first…and avoid chewing off the scion buds before I could snatch them. Here is an example: 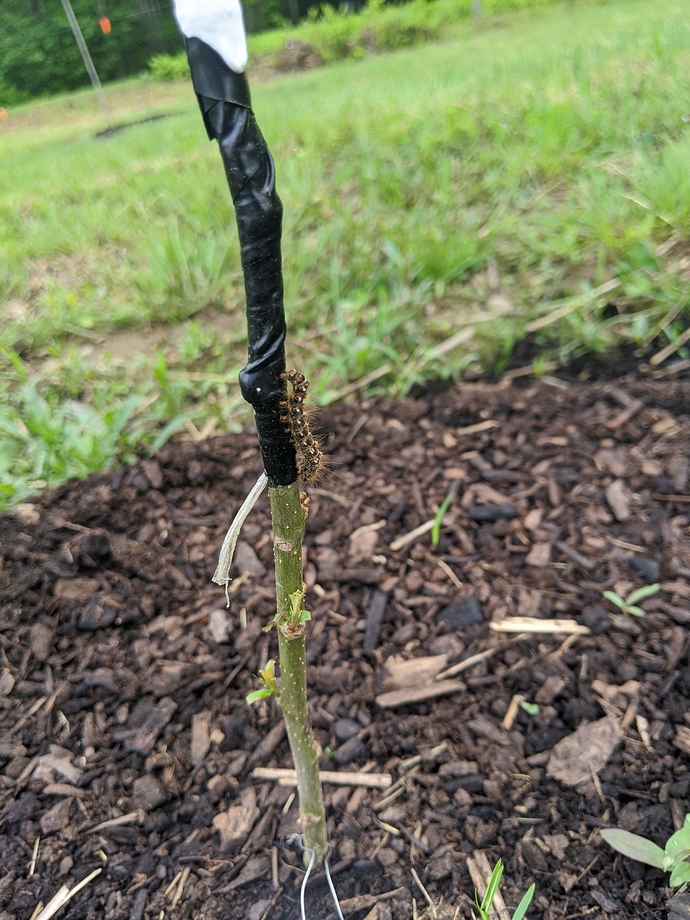 Just thought I’d dip my toe in this awesome community. Please let me know if there is anything I can improve or should be on the lookout for. I’m a grafting newbie!

Nice selection of varieties Everett ! Looks like you’ll have a nice percentage of takes.

Have you tried BT? I think it is best for moths and those catepillars.

I like your selection except for King Daivid. I don’t think it like New England weather very much. My KD graft ( 3 yrs now) has not grown much and it does not produce a lot of leaves. It could be that it does not like me or my backyard.!!

Thanks for the reply. I just read up a little more on king david and it does seem it is heavily adapted to the south…guess it will be an interesting experiment!

As far as the bt goes, I have not used it. I did consider it, but as far as controlling the caterpillars in my young orchard I’m not sure it would be effective because it needs to be injested and my young trees/scions don’t have many leaves to spare. Perhaps spraying it on the oaks before they get a chance to spread may be an option… Something to consider next year for sure. 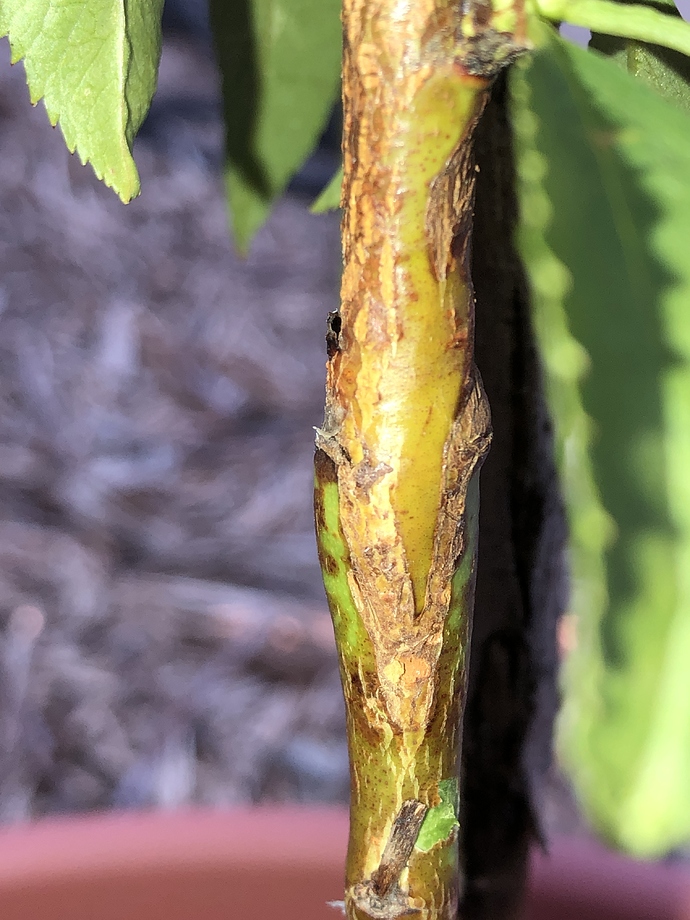 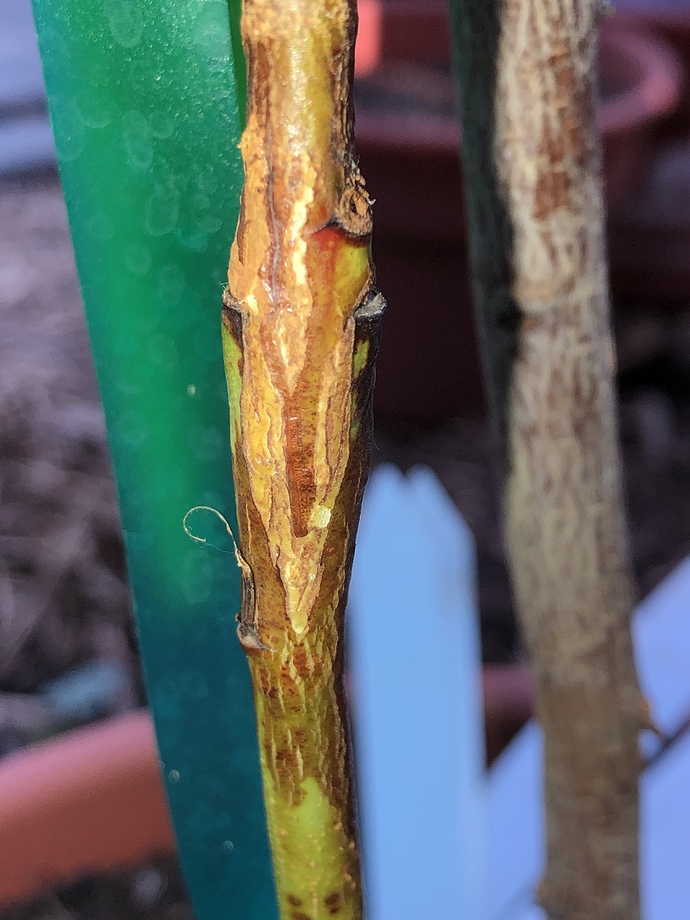 And one barely made it! 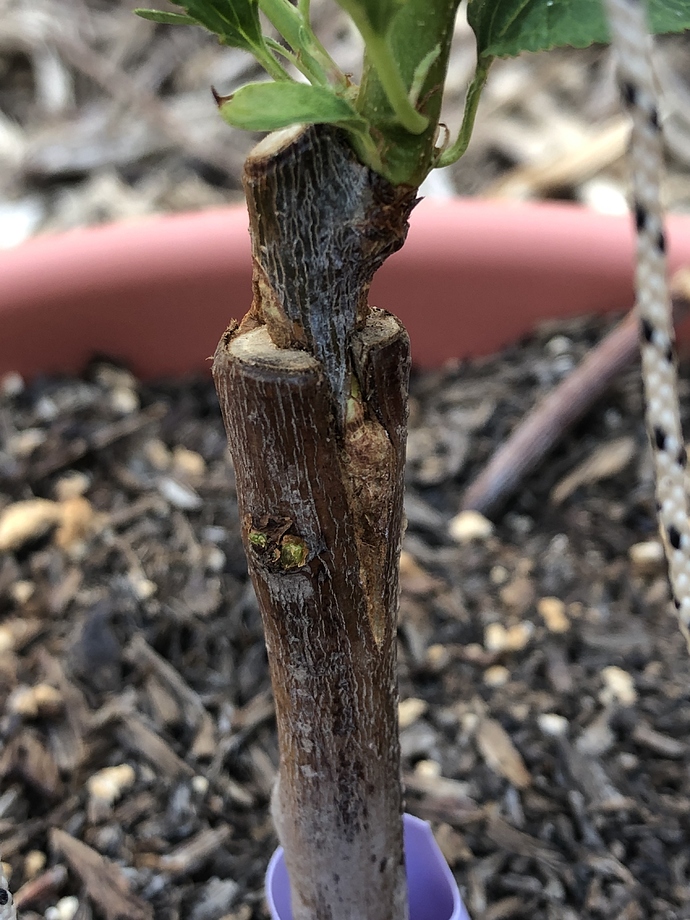 Barely made it = made it.

It was more san experiment. Both scion and rootstock had leafed out. One took and one failed.

lesson - should have pruned and balanced the graft instead of one-sided vigorous growth tipping over. I do have a backup graft that is still alive. 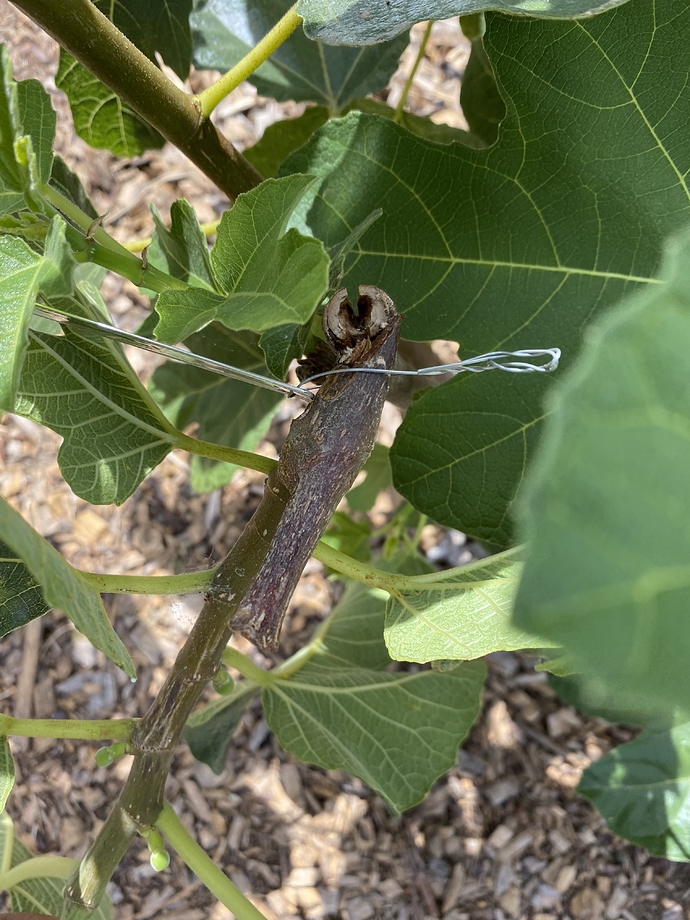 Finally (after >7 weeks), if I squint my eyes, I see a ray of hope with very few of my citrus grafts 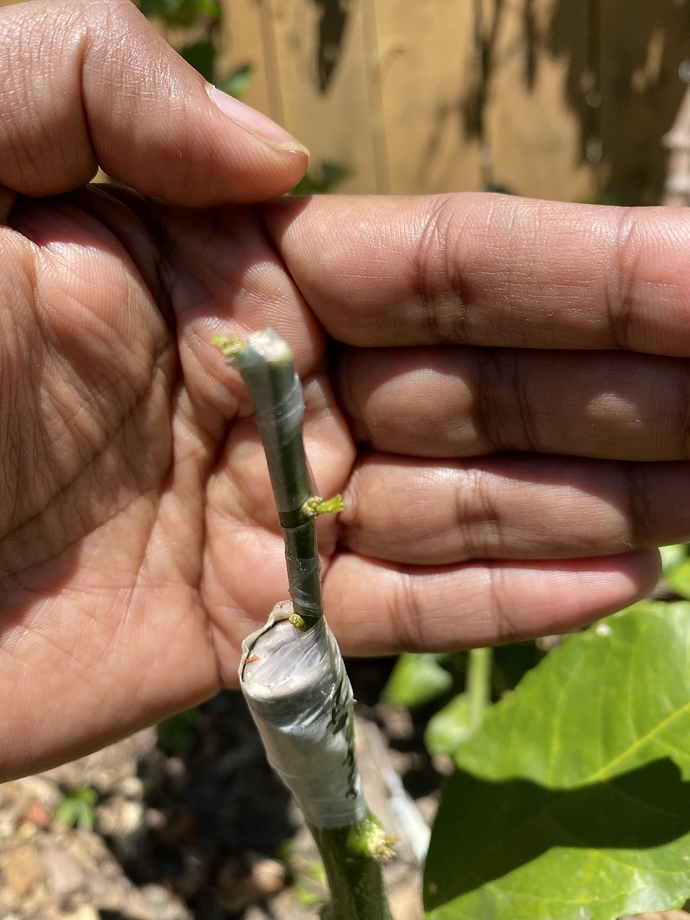 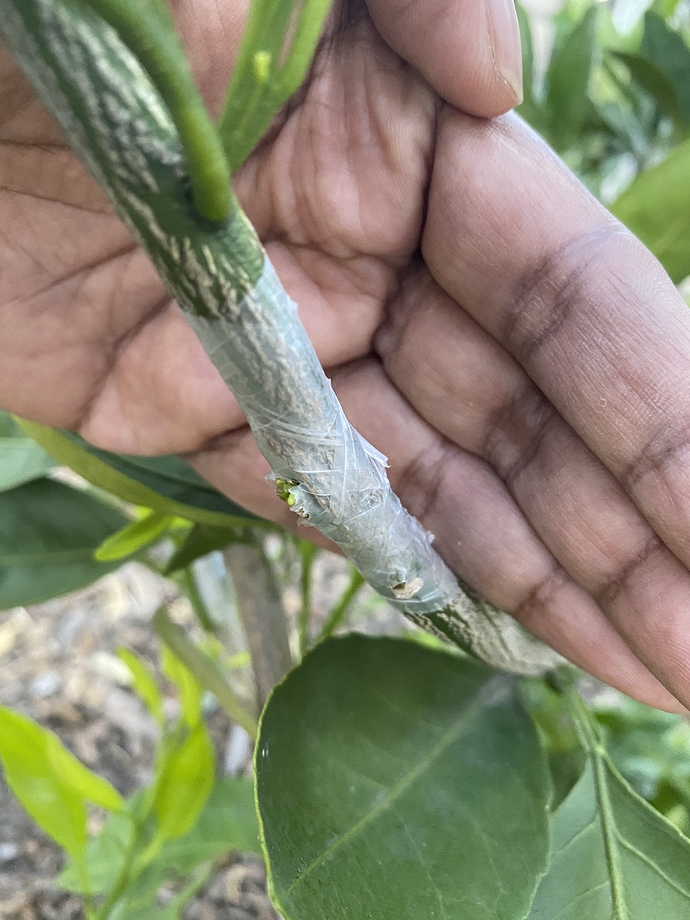 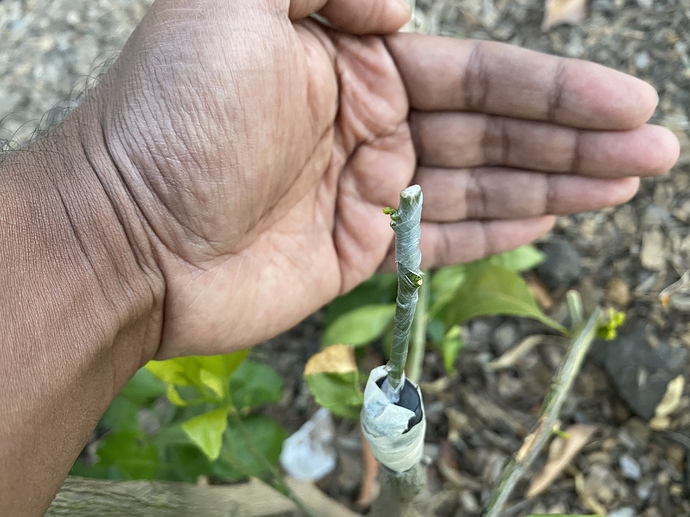 Remaining simply failed except for a couple which are still green with no growth (however hard I look). I should re-examine my technique here (eg. not covering the whole graft, aluminum foil, etc) that I followed from fruitmentor videos for citrus.

Put stakes/what you clipped off the rootstock as a stake if you haven’t been doing so. That’ll help and certainly deter/stop birds from breaking your grafts, too. I don’t see any of those staked but maybe you have a system in place already?

I might have a rubber tub with however many grafts in it but I add 8 or 10 stakes for each tub and all day I watch the birds fly and grab onto them. I’m outside all the time so I get to witness it.