I have only been grafting for 4 years, and I only do 3-4 grafts every year, so I never feel very confident at it. But this year I had 5 scions (I ordered 3 varieties but was sent extras because they were so small) to graft onto my apple FrankenTree, and not too many appropriate sites to graft them onto, since the tree is only about 3’ tall. So the anxiety level was higher than usual

Before starting, I watched a grafting video as usual to refresh my technique. Most of the scions were very small, and all of them were size mismatched with what I was trying to graft them to. A couple of them I had to cleft graft, since they were too small for whip and tongue. Whip and tongue is the only graft I have ever done; this was my first time cleft grafting. When I was finished, sweat was pouring down my face (but no blood!

yay!), and I walked away thinking that most of them would probably fail.

I didn’t pay too much attention to the tree for quite a while except to see if anything looked dead on it (no). Yesterday was the first time I actually looked closely at it since the scions started leafing out. All 5 of the grafts were successful, but the Calville Blanc scion must have had a shot of steroids! It not only had 3 shoots almost a foot long on it, but there were two golf ball sized apples on it as well. I had pinched the blossoms off the scions when I saw them, but I must have missed a couple.

I picked the apples off, of course, but they were far enough along that I could at least tell they ARE definitely Calville Blanc. (Last time I tried a CB graft, I got sent the wrong variety of scion, which I found out the following year when it produced apples.)

Anyway, I’m chalking this success up to beginner’s luck and watching @skillcult’s video on whip and tongue and cleft grafts, which made the techniques so much more understandable.

Up to 15/21 definite takes on persimmons, so 70%! I’m pretty excited since this is my first year grafting. I’d be surprised if more than a few of the grafts that haven’t popped yet don’t do so eventually. And, I’m pretty sure some of my Prok are ambitiously putting out some flower buds. 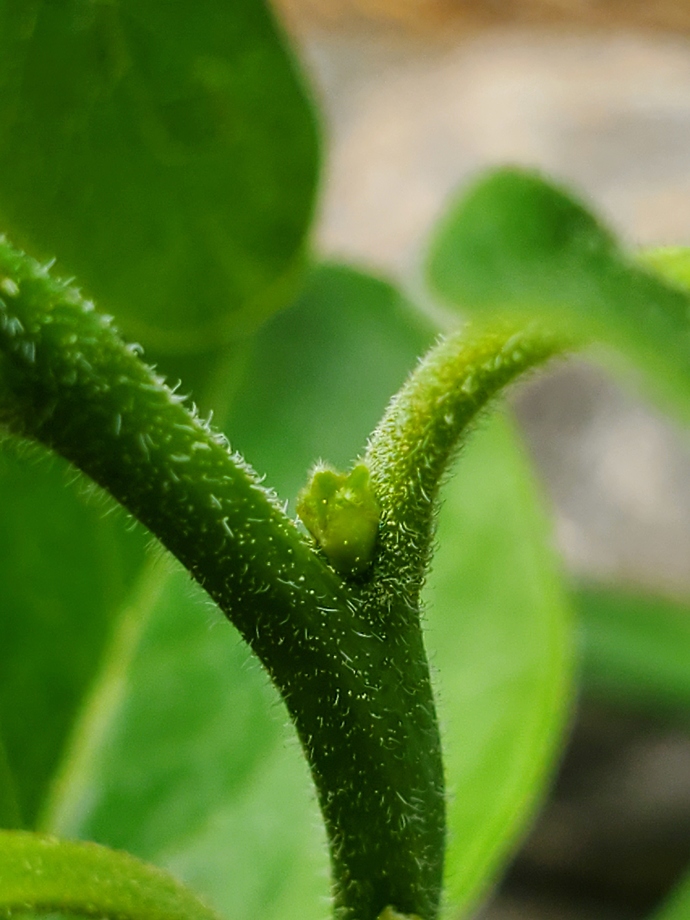 Congrats! What rootstock is your frankentree on? Pushing fruit the first year is impressive! Also @skillcult is great. His videos are super informative and no “fluff”. I love geeking out on his videos.

It is on M111. Here are a couple of pictures. It has 10 varieties on it now. I think for the next couple of years I am going to stop topworking it and just grow and shape what is already on it. 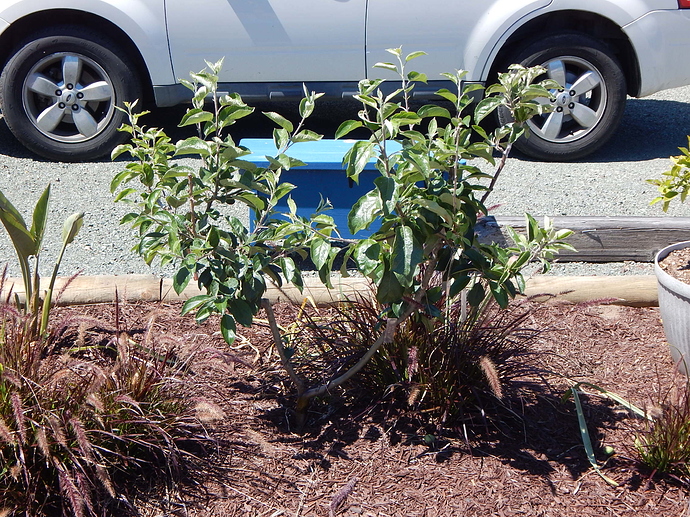 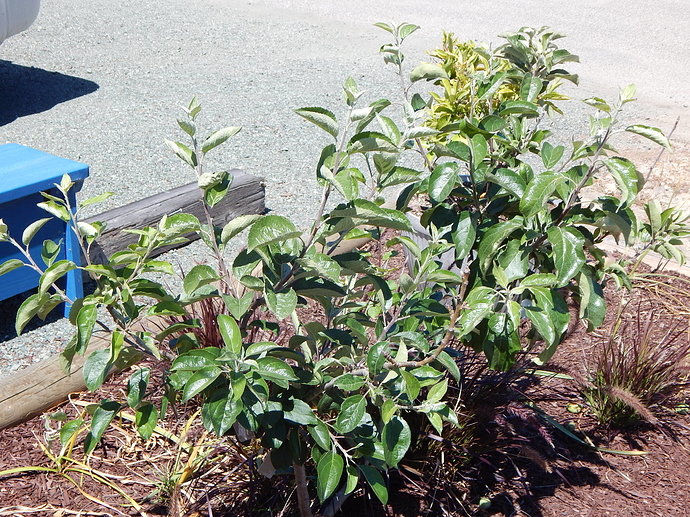 I cut scions off an old sour cherry in mid January , put em in a ziploc and stored in the fridge . In March I took them out to do a whip and tongue graft on some rootstock suckers that sprouted about 15 feet from original tree . The scions were starting to have green buds already when I took out of Frig ? I did the graft anyways , been 6 weeks now , no green buds no more and no new growth visible . I live in coastal Oregon and I’m starting to wonder if my tree never goes totally dormant in the winter cause it never got below freezing ? Anybody have this problem ?

It should only need to be below 45F for a number of days or weeks to accumulate the chill hours.Maybe the scions were too far along and had come out of dormancy,by the time the grafting was started.
I’ve used wood like that and sometimes it worked,but rather have fully asleep stuff.bb

Thanks for response . We had a mild winter , most daily highs in January were slightly above 45 . No days below 35 . Also could not being cold enough in frig caused them to get green buds ? It’s been over 3 months now and nothing green showing on the scions . This is my first time grafting !

Also could not being cold enough in frig caused them to get green buds ?

Yes,that’s possible.I’d like to keep mine just above freezing,but that’s difficult with other food sharing the space.An old dedicated refer or a mini,just for scions,might be the way to go.
What kind of graft was done?bb

Whip and tongue about pencil thick or less scions .Sour cherry . Wrapped with parafilm . My cuts did not impress me . harder to do than I thought . Bought a grafting knife and practiced for 15 min before goin for it . It does not look to hopeful but will let them sit till it falls off dead .

My go to knife for w/t grafting and other soft wood, including side grafting. Cartridge hold 7 blades. One blade Last forever. Easy to sharpened. 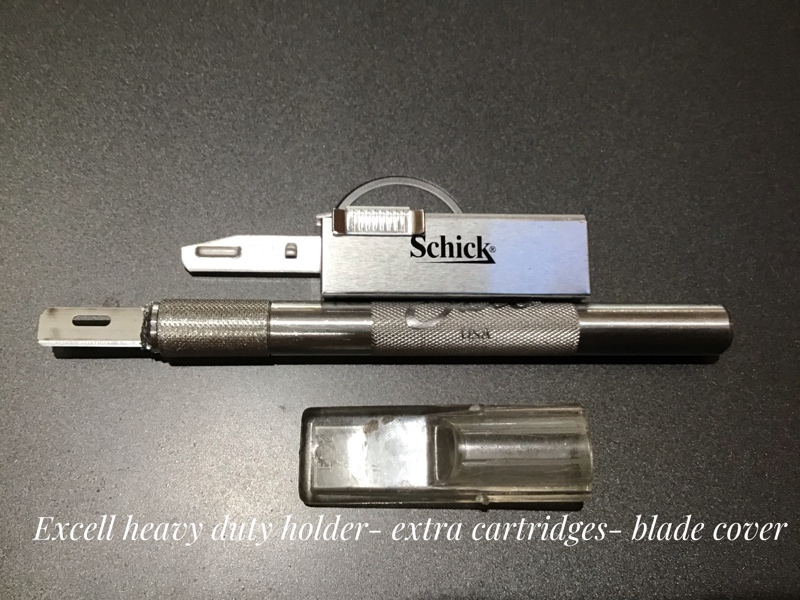 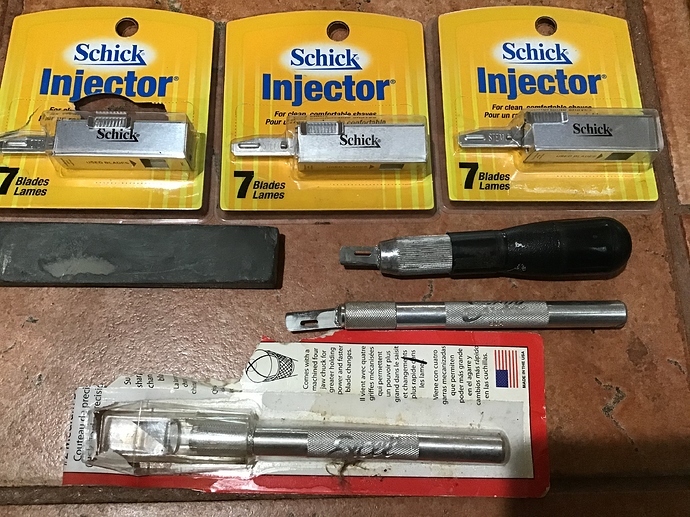 That pic reminds me that I have a carpet cutting blade + knife very similiar to razor blades . Probably better than the 7 dollar grafting knife

Your fridge was probably on the warmer side.

I’ve tried various knives and razor blades, but have settled on this one for cleft grafts on pawpaws

For the cuts on the rootstock, I use a Derby razor blade (also used in my lame for scoring bread)

I did several pawpaw grafts this year - I’ve always been told to wait until the temps were in the 80’s reliably. This year, that came very late - only 2 weeks ago.
I’m having much better luck this year; at least one graft of each variety I used is pushing thru.
Of course, that doesn’t mean they will be ultimately successful.

Some pics of the four apples I grafted in March, so three months of growth- 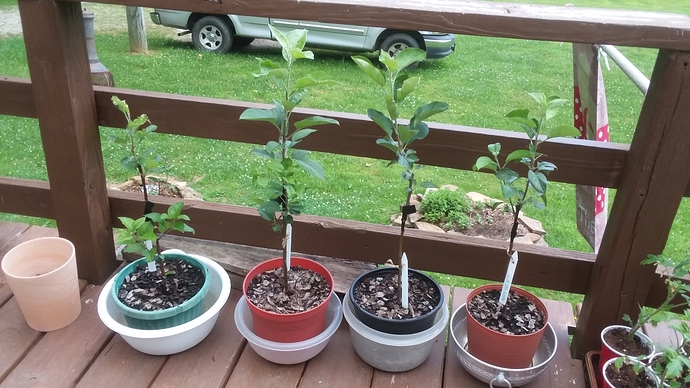 Dayton, about 8in of growth 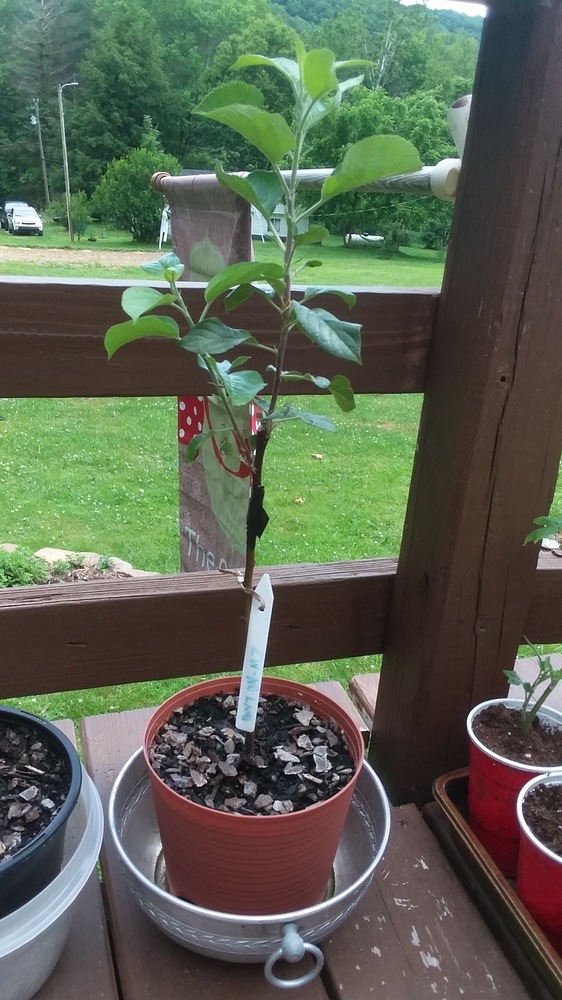 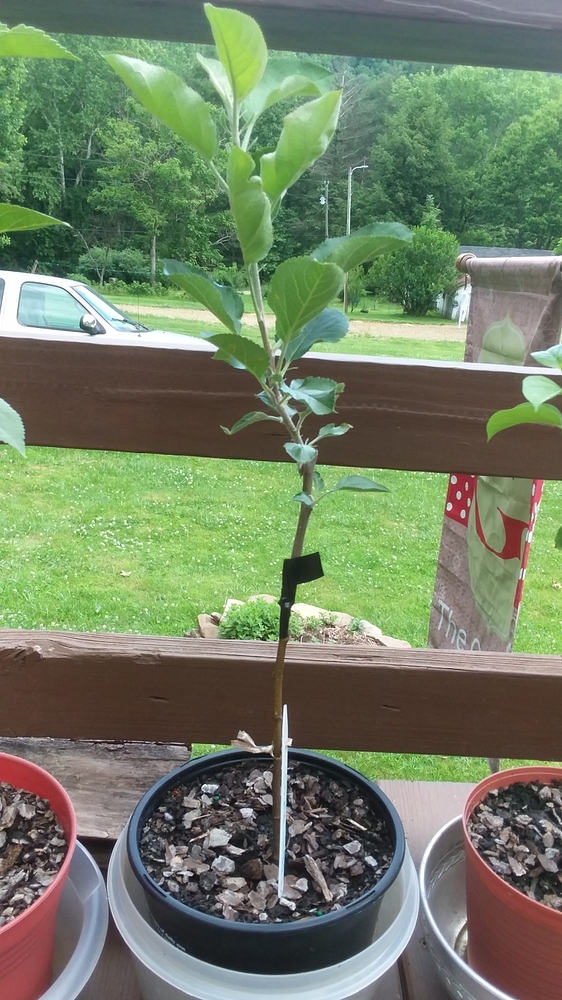 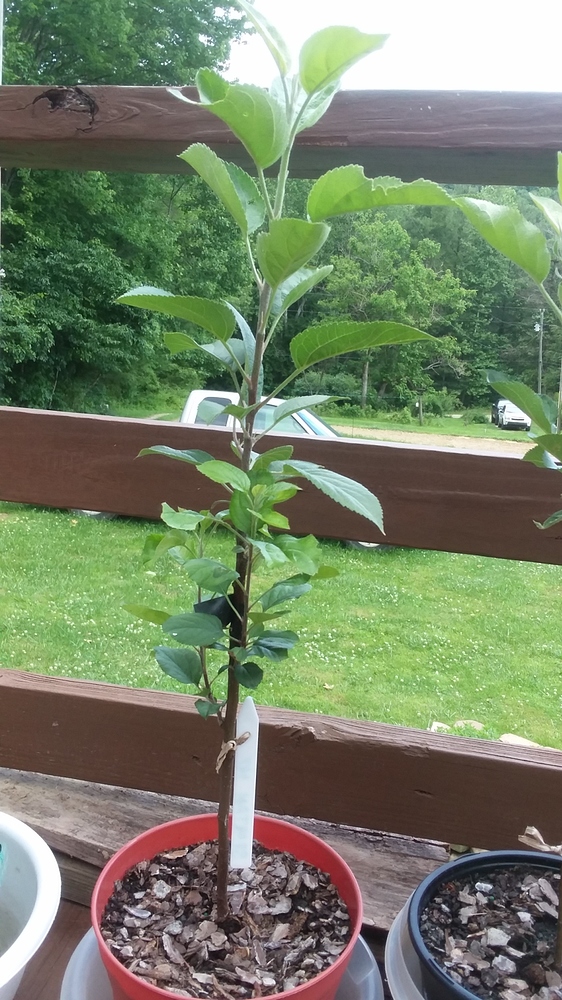 Melrouge, not a lot going on, but still decent, 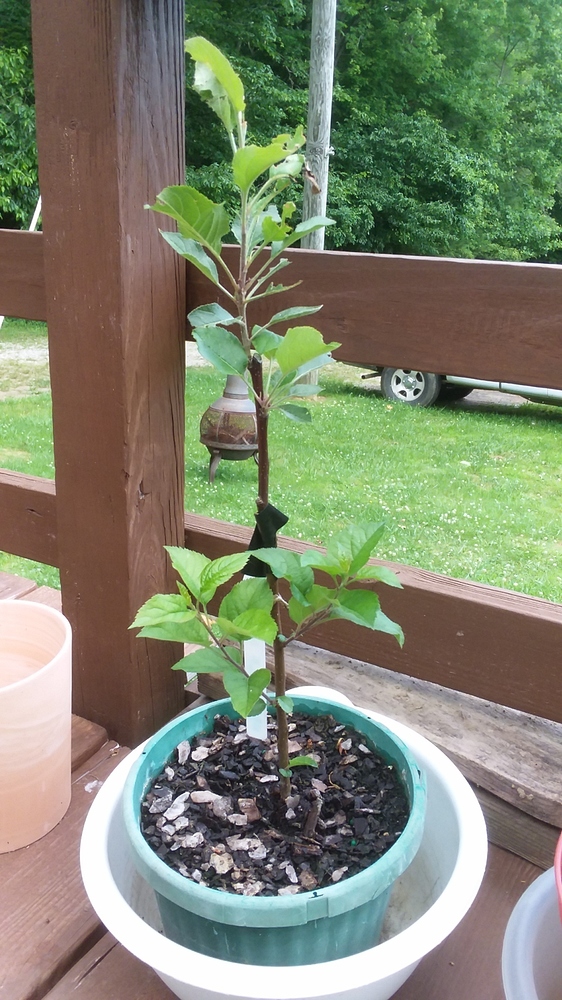 Not grafts, but some of my tomatoes (30) and peppers (4) that will be planted out within a few days. 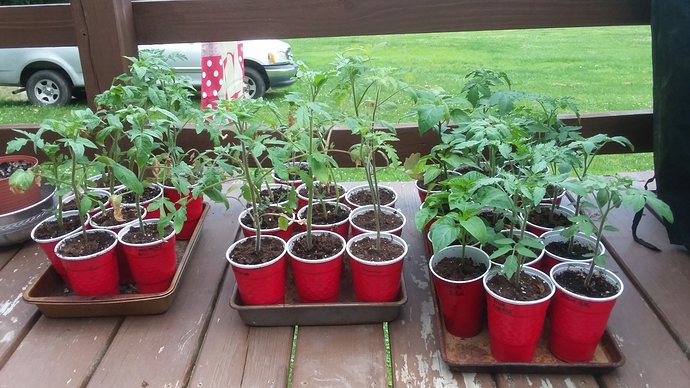 They all look great!

Are the spots with the black tape the graft union on the apples? I can’t tell from the photo if the suckers are from rootstock or scion. If they are rootstock suckers, it may be a good time to prune them. I have 19 inches of growth from Queen Cox on G41. I have brought her in at night for the last 2 weeks, but I noticed the height increased much faster with a single leader.

Are the spots with the black tape the graft union on the apples?

Yes, I plan on removing the electrical tape soon, or at least cut it loose some, I’m pretty sure the graft is sufficiently calloused. I don’t want it to start girdling the trunk.

I can’t tell from the photo if the suckers are from rootstock or scion. If they are rootstock suckers, it may be a good time to prune them

Funny you should mention that. That particular tree had the least amount of growth on it. There were two sprouts off the rootstock and thought it may be hindering the scion growth, so I removed them.

I have 19 inches of growth from Queen Cox on G41

How old is the graft, that’s a lot of growth. These were all done around 3/8, so they’re 3 months old. On M7. They have been outside for about a month on our deck, but I bring them in if any storms threaten.

I have 6 other older potted trees as well. I fertilized them a couple months ago with a handful of triple-10, and they have grown like weeds. Most of them are around 3-4ft tall. Gotta find a place for all these trees eventually!

I checked my logs, and the rootstock shipped on March 2nd, and I grafted it 3 or 4 days after arrival. I have also been bringing it in at night for ~3 weeks, not 2 like I thought. It could be all the mild sunny weather, combined with 70-73 at night (indoors).
I have not used any hormones on it; so perhaps it is fertilizer, or good compatibility between rootstock and scion. I am growing in equal parts landscaping sand, extra-fine fir bark, and composted manure (Ace). I amended with dolomite, epsom salt, cottonseed meal, mycorrhizae granules, and Osmocote.

Wow, that’s quite a soil mixture, sounds very beneficial. I think I just used some cheap potting soil, I think they were potted up in April. I gave them a small amount of triple-10 last month, and last week a small dose of liquid fert (Medina) that I also feed my veggie starts.

I have pretty much left them out all day and night since April, except when freezes or heavy rains were forecast.

I’m surprised you could find G41, did you get them from Cummins or Raintree? That’s a very dwarfing rootstock, yes?

I’ll post some pics of my older potted trees, they responded to the fert with explosive growth, almost too much, as some leaves got burnt, so I may have overdone the triple 10. But they look better now.

I have a Harrison on B-9 with over 20 inches growth, and a Hawkeye on B-118 and a Reine des Hative on B-9 with 18 inches growth … all March grafts … outdoors in partial shade entire time … and minimal organic fertilizer and ironite…planted in combination cheap topsoil and recylcled soil from annuals and deceased plants from prior years. (Most of them several dozen though are in the 8 to 15 inch new growth category.)